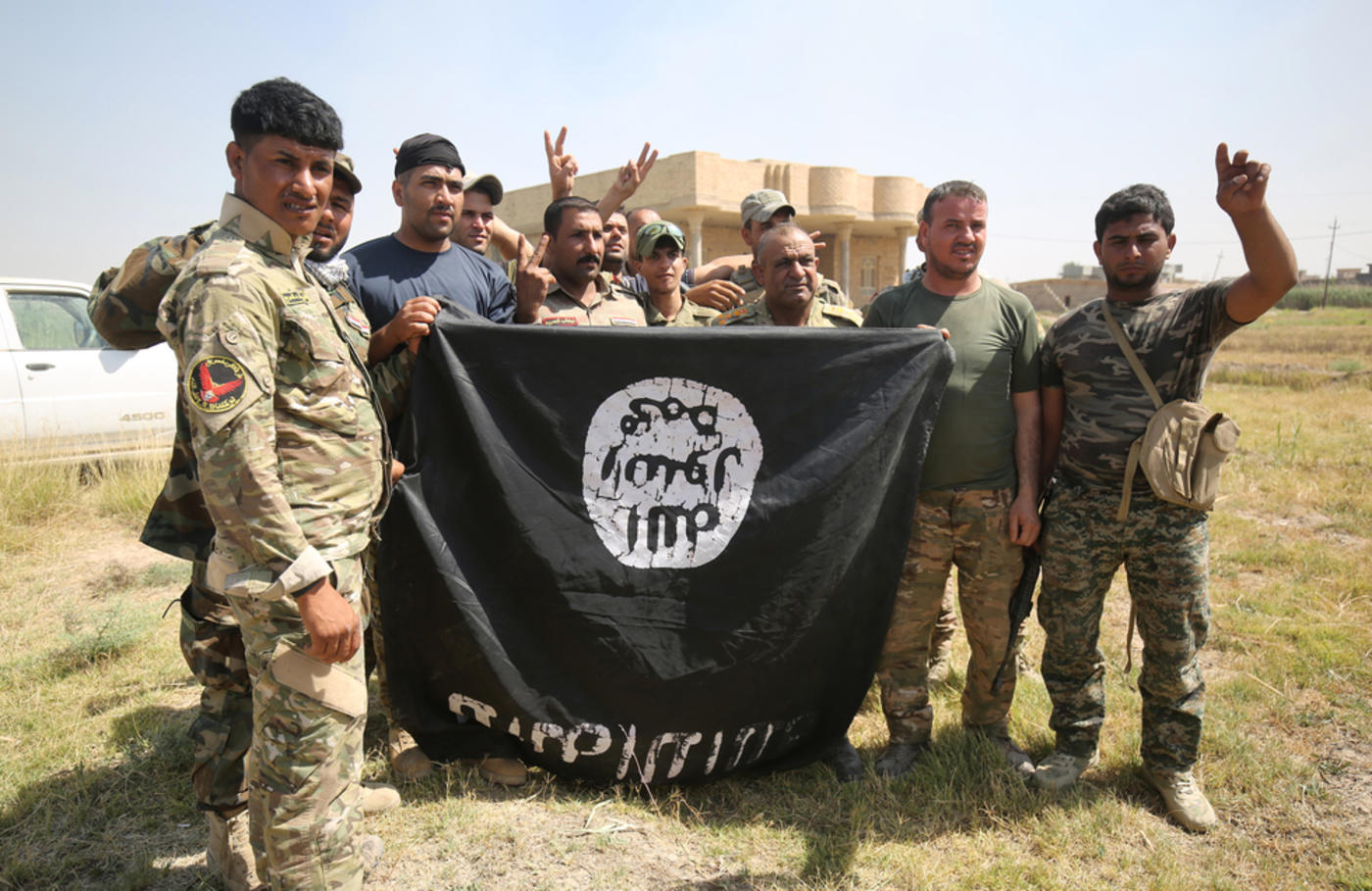 The Islamic State is being battered on multiple fronts by its enemies and is everywhere on the retreat. It has lost Fallujah west of Baghdad and Mosul is under pressure, while in Syria the Kurds are threatening the IS de facto capital Raqqa from the north and the Syrian army from the west. In northern Aleppo province, it is being overwhelmed by a multitude of opponents by whom it is vastly outnumbered, including the Kurds, their Arab allies, the Syrian army and anti-Assad rebel fighters.

In all these battles, the firepower of the anti-IS forces is vastly enhanced by the air forces of the US-led coalition and Russia in addition to those of the Syrian and Iraqi governments.

IS has suffered crippling losses, far more serious than those claimed by the US a year ago when it said that its air campaign against IS had ended its offensive capability, a boast that was embarrassingly deflated when IS captured Ramadi and Palmyra in May 2015.

In the following months, the US military continued to make exaggerated claims of success, saying that IS had lost a significant percentage of its territory, though this was meaningless in countries where so much of the terrain is desert or semi-desert. Such propaganda was never very convincing, but it may have undermined the long-term credibility of US President Obama when he truthfully said after the Orlando killings that IS is weakening under the impact of 13,000 airstrikes and the loss of many of its main population centres. In Iraq it has lost Ramadi and Fallujah that once had a combined population of 650,000 and in Syria it may lose its fertile well-populated territory in north Aleppo that is home to 700,000 people.

These victories by the anti-IS forces are very real, but also a little deceptive because they are successes of a particular kind that will not easily transmute into full political control of areas taken from IS. They have been won by limited numbers of high-quality infantry advancing under the cover of a heavy, precisely targeted air bombardment which destroys IS fixed positions. This has been the pattern of military operations in Iraq and Syria since US air strikes prevented IS capturing the Syrian Kurdish city of Kobane in a 134-day siege that ended in early 2015. IS was reported to have suffered massive casualties, including 2,200 fighters killed, before it was forced to fall back,

In positional warfare IS units are highly vulnerable, but they are still effective when they revert to well-organised surprise attacks. Kurdish leaders were impressed when IS gathered some 400 fighters and attacked Teleskof, an abandoned Christian village 14 miles north of Mosul in early May. They broke through the front line and forced the Peshmerga to make a swift and confused retreat much as they had done in 2014 according to local Christians. The IS fighters were only stopped, and suffered heavy casualties, when they were hit by coalition aircraft. Last weekend there was another well-coordinated IS assault at Tuz Khurmatu between Baghdad and Kirkuk, which left 24 Iraqi policemen dead, including the local police commander.

Attacks like these work, at least for a time, because they enable IS to revert to guerrilla tactics and catch their enemies by surprise using suicide bombers on a mass scale, snipers, booby traps and improvised explosive devices (IEDs). But coalition and Russian air strikes make it very difficult to turn these local successes into strategic victories as IS was able to do in 2014 when it rampaged through northern Iraq and eastern Syria.

The shock effect of these tactics, enhanced by well-publicised atrocities, is not what it was. The Iraqi and Syrian armies and likewise the Peshmerga and the Syrian Kurdish People’s Protection Units (YPG) are more confident and experienced than they were a year ago. They can call in devastating air strikes at any time, but they are unlikely to have it all their own way. The further they move into core IS-held Sunni Arab territory the more they will be spread out and vulnerable to guerrilla attacks.

Media reports of the battle for Fallujah give the impression that the Iraqi army is a big force, but it has never quite recovered from the defeats of 2014, so it must rely on about 5,000 counter-terrorism forces and two regular army divisions. These are outnumbered by about 35,000 Shia paramilitaries in the Hashd al-Shaabi.

The low numbers are significant because they are not enough to permanently occupy territory once it is taken, giving anti-IS forces an incentive to drive out the local people and keep them out so there is no local population into which guerrillas might blend. Sectarian and ethnic cleansing is all the greater because ordinary Kurds and Shia are full of paranoid fears of IS "sleeper cells" and hostile to Sunni Arabs returning to strategically important or mixed communities such as those in the provinces around Baghdad.

Of course, there may not be much for the Sunni Arabs to return to. Ramadi was recaptured but some 32,000 buildings in the city were destroyed or damaged as were 64 bridges, as well as hospitals, electricity and water facilities. Fallujah may not be quite so badly damaged, but it has been intermittently bombarded for two-and-a-half years and had, in any case, never wholly recovered from the two US sieges in 2004.

Indeed, the whole five or six million strong Sunni Arab community in Iraq is now under threat as its cities and towns are over-run or destroyed. In Baghdad they have been reduced to a number of enclaves, mostly in the west of the capital, since the 2006-7 sectarian slaughter, while in the north the noose is tightening around Mosul, the last great Sunni stronghold in Iraq. “In future we will be like the Palestinians,” said one former Sunni Arab resident of Ramadi.

Paradoxically, these recent defeats of IS are not entirely to its disadvantage. One of its main strengths has always been the extreme disunity of its enemies, though terror of IS sometimes acted as a counter-balance to these divisions. The Shia parties and paramilitaries in Baghdad are often rivals who are not far from armed conflict, but fear of IS has hitherto prevented this happening. In Iraqi Kurdistan the Kurdistan Democratic Party and the Patriotic Union of Kurdistan, each with about 35,000 Peshmerga, dislike each other, but again IS is a force for Kurdish unity in the face of a merciless enemy.

Similarly in Syria, support for Assad has always been partly dependent on his government being seen as the only alternative to a Salafi-jihadi victory in which IS would be the most powerful force. He knows that the very existence of IS and al-Nusra dominating the Syrian armed opposition means that much of the international community would prefer him to them.

For the Syria and Iraqi Kurds the prospect of an IS defeat also has its dangers. The leaders in the two Kurdish de facto states – the Kurdistan Regional Government and Syrian Kurdish enclave of Rojava – may detest each other, but they are both reliant on their alliances with the US against IS. But if IS disappears, and the Syrian Kurds cease to be the favoured friend and military ally of Washington, they will no longer be able to expect a degree of protection against Turkey.

In Iraq, the Kurds took advantage of the capture of Mosul by IS to take over the territories long disputed with Baghdad. It is doubtful if they could hold on to them without international support, which may be absent once IS no longer poses a threat. IS is undoubtedly weakening but it is too early for its obituary to be written while its enemies are so divided.

- Patrick Cockburn is a Middle East correspondent of the Independent and the author of "Chaos and Caliphate: Jihadis and the West in the Struggle for the Middle East."

Photo: Iraqi fighters from a Popular Mobilisation unit hold an Islamic State (IS) group flag in an operation in al-Shahabi village, east of Fallujah on 24 May, 2016 (AFP). 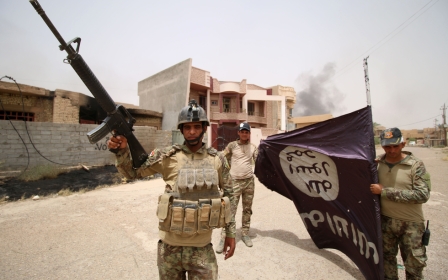 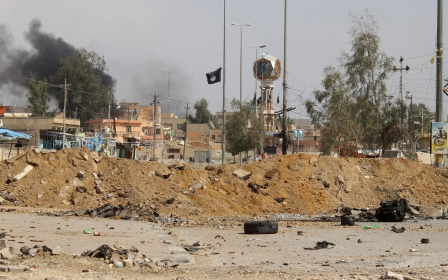 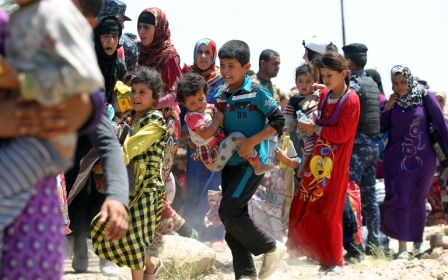