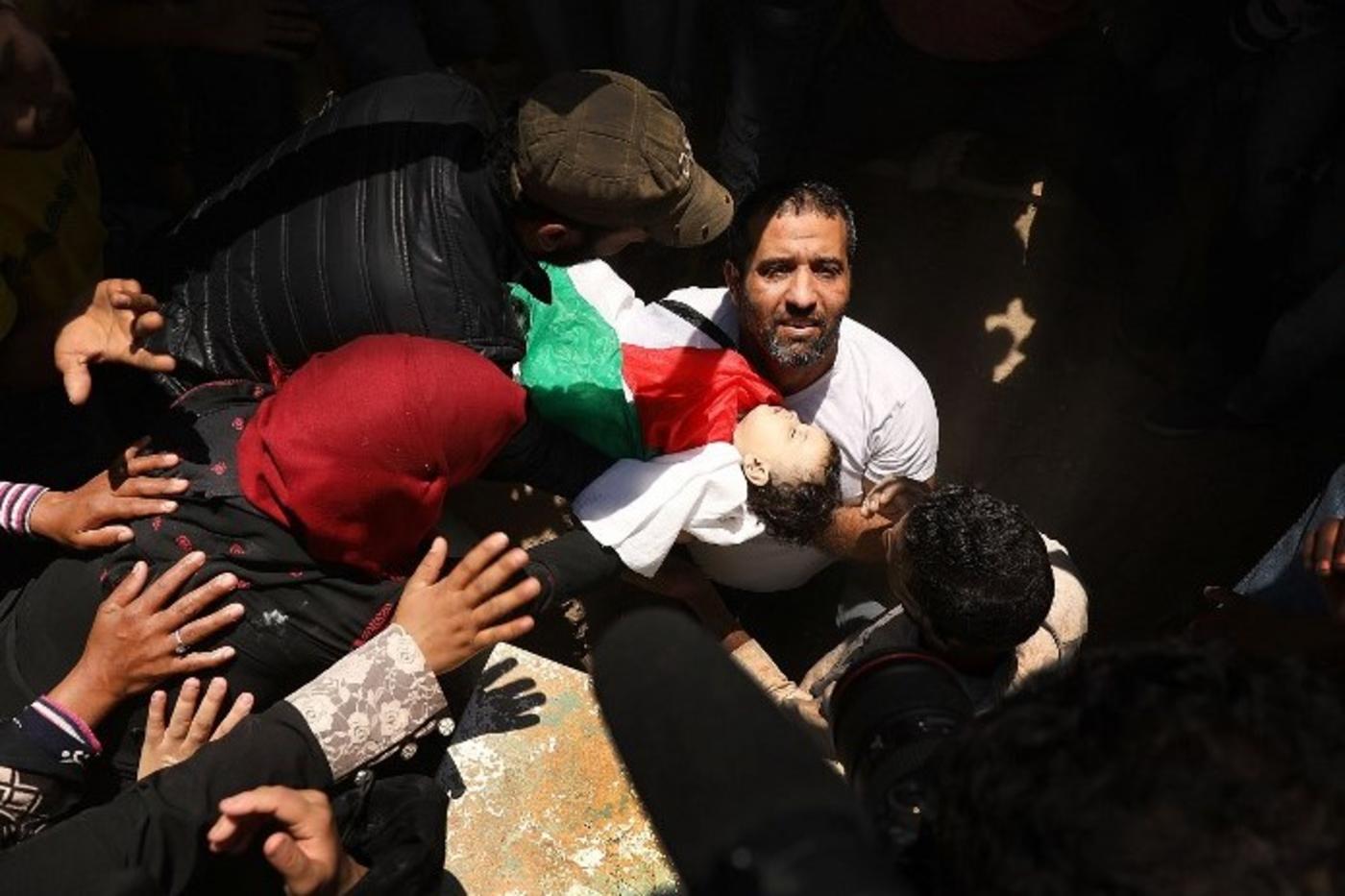 In today's world, if someone is called a "terrorist", he instantly loses his human face. Torturing, starving, humiliating and attacking Gaza's population of two million civilians is okay, as long as you label them "terrorists". Once you've done that, no justification, excuse or evidence is needed.

Even an eight-month-old infant dying after inhaling tear gas, or a 14-year-old boy shot in the head cease to become too much of a problem if you brand the population they come from as "terrorists".

When Iranians protest the absence of human dignity, they are brave and worth supporting. When Palestinians in Gaza do the same thing, they attract suspicion and Israel responds by saying "there are no innocents in Gaza" because the protesters in Gaza are "Nazi terrorists". That word helps them sleep at night and is picked up by the world's media.

The agency of Palestinians is never acknowledged. The humanity of two million civilians evaporates once they demand their right to life. They are disregarded as "cannon fodder", mindless robots with no free will. There is always someone sending them to throw their bodies in front of Israeli bullets, to embarrass "the world's most moral army".

Israeli media used the term "child sacrifice" to put the blame on Palestinians whose children were slaughtered during the Second Intifada. The "blame-the-parents" strategy had its origins in apartheid South Africa, in an effort to dehumanise the dead.

The suggestion that protesters were manipulated into risking their lives is misleading and goes against common sense. Not even Hamas’s most loyal members would run towards death on command

The events on 14 May in Gaza were in line with Israel's long record of massacring Palestinians. The Israeli army killed 62 Palestinian protesters and injured more than 3,000 in broad daylight. Their crime was to demonstrate against US President Donald Trump's efforts to liquidate the Palestinian right of return to the homes from which they were expelled in 1948.

Many of the protesters wounded in Gaza's Great March of Return were shot with live bullets, their bones "literally … turned into dust", according to Doctors without Borders.

While Amnesty International said the targeted demonstrators posed no imminent threat, Israel claims they endangered themselves by approaching the separation fence that cages the population in what Haaretz has called "the Palestinian Ghetto". But Israel has no right under international law to use violence to maintain its brutal occupation and criminal blockade.

Many protesters say they joined the Great March of Return to challenge their slow death in an open-air prison and to demand an end to Israel’s blockade. Israeli authorities, however, dismiss these narratives and instead parrot the dehumanising phrase "dead baby strategy", claiming that Palestinians are sending their children towards death for the sake of embarrassing Israel.

One simple solution to counter this alleged tactic was proposed to Israel by Nikolay Mladenov, the UN's Special Coordinator for the Middle East Peace Process: "Stop shooting at children." Israeli reserve Major General Oren Shachor has said in the past that "if we kill their families, that will frighten them".

The suggestion that protesters were manipulated into risking their lives is misleading and goes against common sense. Not even Hamas's most loyal members would run towards death on command.

The New York Times reported: "After midday prayers, clerics and leaders of militant factions in Gaza, led by Hamas, urged thousands of worshipers to join the protests. The fence had already been breached, they said falsely, claiming Palestinians were flooding into Israel." However, people on the ground narrated the exact opposite. Protesters could see whether the fence was breached, as it was in plain sight of their tents, located just uphill.

Many incidents were reported of people affiliated with Ramallah's intelligence agencies saying that "the march was cancelled, don't go". Fatah and Palestinian Authority (PA) employees were strictly ordered to stay home and avoid the march, and to ask friends and relatives to do the same.

Distorting and misinterpreting a statement from a Hamas leader, Israeli Prime Minister Benjamin Netanyahu quoted Salah al-Bardawil’s claims that 50 of the 62 victims were affiliated with Hamas. In this way, Netanyahu attempted to justify the extrajudicial executions of 50 Palestinians on the grounds of their supposed political affiliations.

Bardawil’s inflated estimation included even a martyred baby, as his word choice referenced those who support Hamas or armed resistance, which applies to at least half of the population, including those with no political affiliation.

Hamas announced that it would participate in the march like any other political group, and Hamas members who joined had to lay down their weapons, remove their military uniforms and participate as civilians. Hamas strictly prohibited the use of weapons and the group's flag, so as not to give Israel any excuse to attack the protest.

The Israeli army has claimed repeatedly that protesters attempted to attack Israel, yet Israeli veteran war correspondent Ron Ben-Yishai reported that: "Neither we nor the international media received images and firsthand testimonies illustrating the danger and the threat to the snipers and other [Israeli] forces deployed along the fence."

Distinguishing Hamas from the PA

The protest's organising committee repeatedly emphasised the importance of non-violence as the main theme of the march, even as Israel repeatedly attacked Gaza. If Hamas had intended to kill Israeli snipers, it could have done so with its sniper unit, instead of desperately smuggling "militants in civilian clothes" into the crowds. Hamas even released footage showing Israeli snipers within its range, but it refused to retaliate so as to maintain the protest uninterrupted.

Israel deliberately targeted many Hamas activists at the protest, none of whom were performing 'terrorist actions'

A statement by Hamas leader Mahmoud al-Zahar has also been taken out of context by Israeli leaders. Asked whether or not Hamas would lay down its weapons and engage in non-violent resistance like "the collaborationist PA that Hamas consistently criticises", Zahar said Hamas would never lay down its weapons, noting that its protests were not as peaceful as the PA's - in the sense that Hamas forces at home were deterring Israel from invading Gaza and killing, capturing or assaulting protesters as freely as they do in the West Bank.

Several Hamas activists noted that were it not for the armed resistance forces at home, Israeli troops could have just walked across the Gaza fence, destroyed the tents, arrested people by the hundreds and returned home safely, all with the collaboration and protection of PA forces. Zahar’s argument was simply meant to distinguish Hamas from the PA, not to suggest that there were any armed protesters at the Great March of Return.

Israel deliberately targeted many Hamas activists at the protest, none of whom were performing "terrorist actions". It is, in fact, a bizarre argument to first demand that Hamas engage in nonviolent resistance, and then, when Hamas supporters do exactly that, claim that they are legitimate targets because they’re members of Hamas. If they’re legitimate targets either way, then what's the incentive not to engage in violence?

Photo: The body of eight-month-old Leila Anwar Ghandoor, who died in hospital on Tuesday morning from tear gas inhalation, is placed into a grave on 15 May, 2018 in Gaza City, Gaza (AFP)