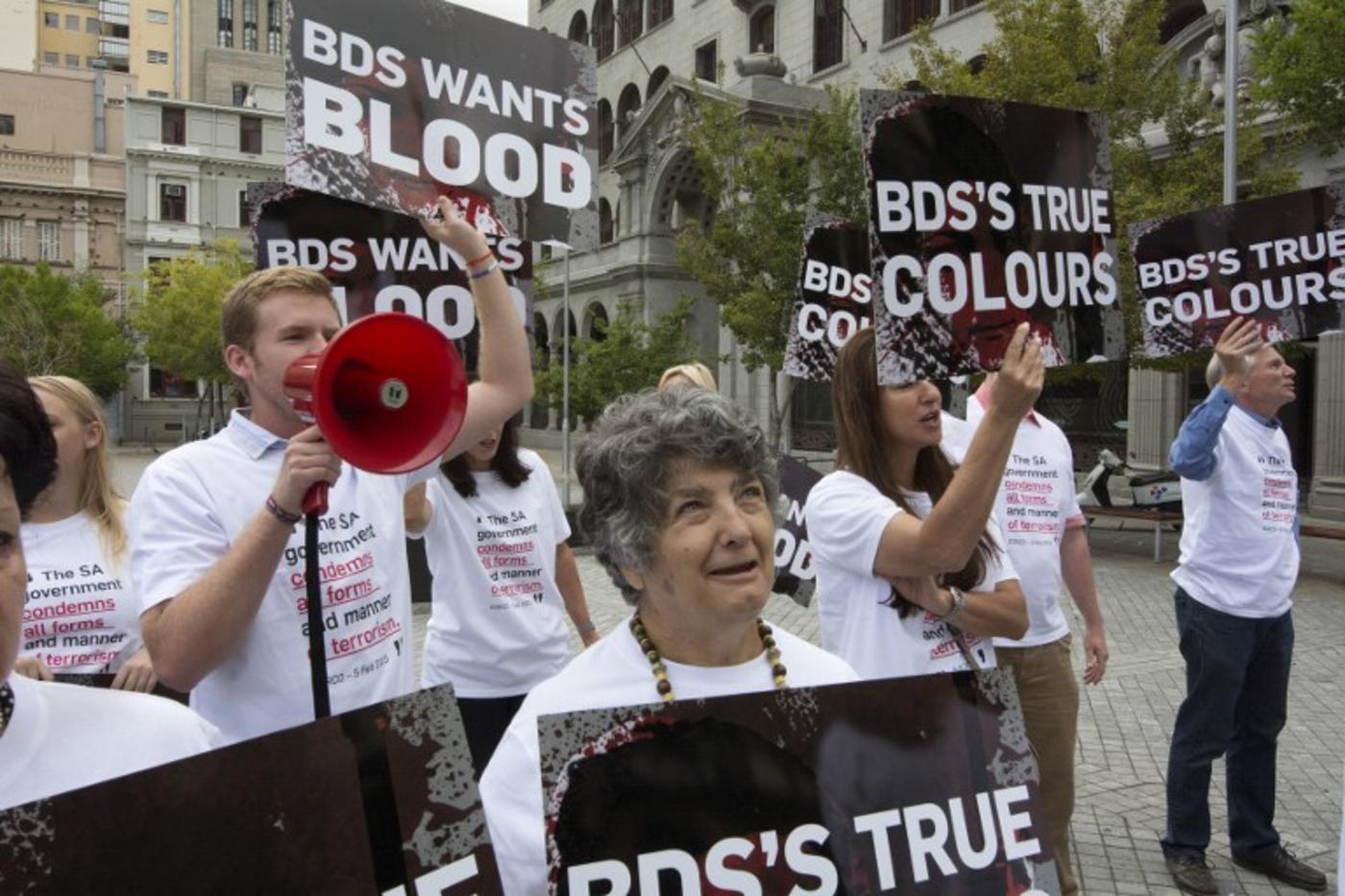 Critics of Israel’s policies and the ongoing colonial displacement of Palestinians are familiar with the antisemitism smear. Now, faced with a growing boycott and allies increasingly frustrated with its rejectionist, ultra/right-wing policies, Israel is preparing to up the ante in its attack on the Boycott, Divestment and Sanctions (BDS) campaign.

This week, the Israeli government is convening the Global Forum for Combating Antisemitism (GFCA) in Jerusalem. The fifth event of its kind, the conference is billed as “the premier biennial gathering for assessing the state of antisemitism globally, and formulating effective forms of societal and governmental response.”

Organised by the Ministry of Foreign Affairs (MFA) and the Ministry of Jerusalem and Diaspora Affairs, big-name attendees include Prime Minister Benjamin Netanyahu and Mayor of Jerusalem Nir Barkat, while the list of international speakers features the Justice Ministers of Germany and Romania and the Minister of State for Multiculturalism from Canada. An estimated 1,000 participants are expected, including officials from the US and UK governments, as well as Google and Facebook.

This year’s conference, says Israel’s MFA, will have a “special emphasis” on “coping effectively with the rise of antisemitism in Europe, the internet and the social media.” The context, in their words, is a “renewed growth of antisemitism and of voices denying the Holocaust and distorting its memory”, with “many Jews in Europe again feel[ing] insecure in the face of growing attacks.”

Part of the problem with this particular ‘anti-racism’ conference is the views of those involved. Netanyahu has described Palestinian citizens as Israel’s “demographic problem”, while Nir Barkat openly believes in maintaining a Jewish majority in Jerusalem. Yuli Edelstein, meanwhile, has described Arabs as a “deplorable nation”.

One of the working groups is led by Itamar Marcus, a prominent West Bank settler who believes that the Palestinian population is “poisoned by…terror.” Another speaker, Robert Wistrich, has described Islamophobia as a “myth” promoted and used by extremists in the “Muslim-grievance industry.” Ido Daniel, from Israeli Students Combating Antisemitism, likes to oppose Palestine solidarity on campus by quoting hadith, and wants to “exact an economic and personal cost from [BDS activists].”

Contributors aside, the conference itself is being run by a government that maintains an apartheid-style military regime in the occupied Palestinian territory, pursues settlement and colonisation of Palestinian lands while expelling its residents, and passes laws that discriminate against non-Jewish citizens. In other words, a state whose de facto and de jure racial discrimination has been documented and slammed by UN committees and international NGOs is hosting a discussion on fighting discrimination and racism.

A significant part of the conference’s proceedings are concerned with attacking and undermining Palestinian solidarity internationally, and in particular, the BDS campaign. This has been a recurrent theme of the GFCA’s activities, with previous conferences providing opportunities for lobbyists and activists to meet and strategise over how to protect Israel from growing efforts to hold it to account.

In 2007, delegates debated the best “pre-emptive strategies” for fighting “academic and economic boycotts” in Western Europe, as well as how to fight “anti-Semitism in the academy.” At 2009’s GFCA, a working group discussed “imaginative, effective and successful solutions to counter this evil [of BDS]” to forge strategies of “defence” and “offence.”

At the GFCA in 2013, a working group on “delegitimisation and anti-Zionism” focused on identifying “new legal, political, economic and other strategies [that] can be employed to pre-empt and defeat these campaigns” such as “changing the law to sentence boycott activists”. One recommendation made at the gathering was to ensure that “scholars attacking Israel” would “pay a price.”

This week’s conference has similar themes, as the programme makes clear. The BDS-focused working group includes a bizarre list of “points for the future” that reads like self-satire: “Label BDS supporters ISRAEL DENIERS”; “Publicly, do not talk about the threat posed by Israel deniers – portray the entire movement as fringe, ineffective, and anti-peace”; “Never use the ‘A’ word in any connection with Israel”; “Focus on a positive Israeli agenda, prepare for the worst.”

"Preparing for the worst" is exactly what Israel’s supporters in the West have had to do, with the country’s image nose-diving since the Second Intifada. While “rebranding” Israel to associate it with nightlife and beaches has had only limited success, each new atrocity from the Wall in the West Bank to massacres in Gaza has only intensified Palestine solidarity in civil society.

In response, pro-Israel groups and individuals have increasingly relied on the insinuation or direct accusation of “antisemitism” in order to try and stifle BDS campaigns and other forms of dissent. Just last week, another conference on antisemitism, organised by the American Jewish Committee, called on “European political and civil society leaders” to condemn “those who deny Israel’s right to exist, demonise Israel, or deny the Jews’ bond to their historic homeland”.

Here in Britain, the Community Security Trust (CST), a frequently cited charity that records antisemitic incidents, has been accused of “abusing its mandate by providing political support for Israel”. They are also part of this week’s Israeli government conference. Last August, CST’s communications director Mark Gardner revealingly claimed that while the Jewish community would “get through” the spike in antisemitic incidents, “the boycott stuff is really, really serious.”

As Gardner added, Israel has approached the “tipping point” of becoming “the new South Africa that everybody should boycott”. It is this awareness that fuels claims of antisemitism, or appeals to ‘community relations’, every time there is an academic conference or theatre production deemed beyond the pale, or show of solidarity with Palestinians still denied their basic rights.

Cries of “racism” from an institutionally racist state is disingenuous. Conflating BDS and antisemitism is also dangerous – it damages the fight against real bigotry in the name of protecting a pariah.

Photo: Some 60 people demonstrate outside the venue where Palestinian resistance veteran and two-time plane hijacker Leila Khaled attend an event organised by the Palestinian BDS (Boycott, Divestment and Sanctions against Israel) movement on February 13, 2015 in Cape Town. (AFP) 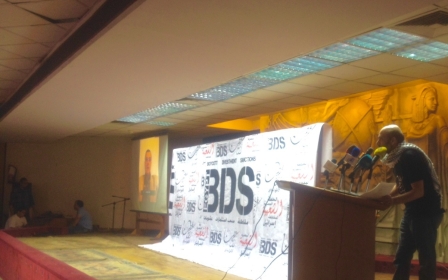 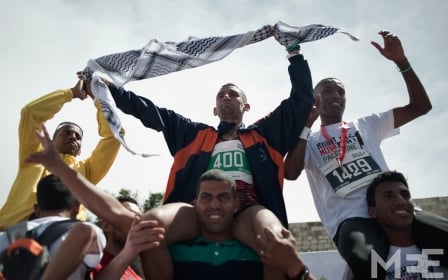