Drone terror: Welcome to the barbarism of ‘civilisation’ 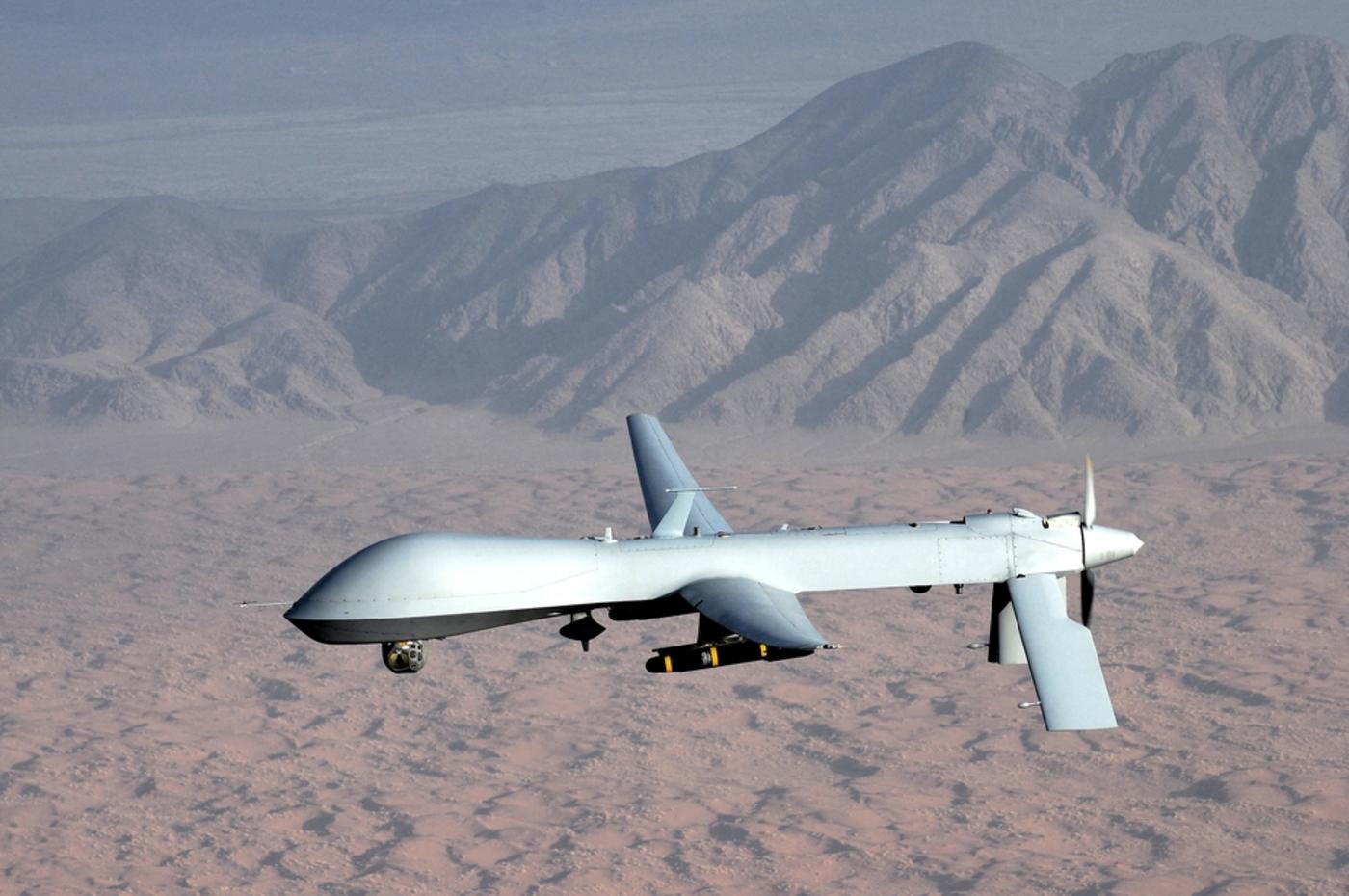 Terrorists like to believe they are committing mass murder for a noble political cause.

Islamic State (IS) acolytes believe they are fighting against the evil “Crusader” states of the kuffar (disbelievers) to establish a global khilafah (caliphate).

“War on terror” proponents believe they are defending Western civilisation against barbaric terrorists hell-bent on destroying our “values” and “way of life”.

Both frames depict the enemy in sub-human terms, as barbarians outside the gate. Both justify colossal destruction of civilian life as necessary and inevitable to obtain noble political goals.

In the aftermath of the Paris attacks, once again, people wondered, debated: how can people become so unfathomably evil that they deliberately commit mass violence against innocent civilians?

The answer is simple: dehumanisation. Killing is easier when those you are killing are categorised as existing somehow outside the frame of one’s own humanity, and thus, less than human, Other.

The brutal massacre of 130 people in Paris on a Friday night, in the heart of the city, when people were out with friends and family, illustrates how terror works: strike suddenly, to inflict fear and panic, to paralyse society. President Hollande rightly described the mass murders as an “act of war,” requiring a “pitiless” response.

Imagine, though, if attacks like that undertaken by IS in Paris were inflicted every other day on France and other Western countries. Imagine if a Charlie Hebdo-style massacre erupted every other week in the US, UK and France, killing a dozen or so victims at a time.

The outcry would be, rightly, deafening. Demands for retaliation would be self-evidently sensible. The need to take “all necessary measures” to crush the terrorists would be unanimously agreed on by Western leaders. Civilian deaths in Iraq and Syria might be dismissed as regrettable “collateral damage” in necessary self-defence.

Claims that these constant terrorist attacks – slaughtering innocent American, British, French and other Western citizens every few days and weeks – were in any way justifiable by Western foreign policies would be roundly rejected as morally bankrupt.

Yet this is already happening.

Yesterday, the UK Ministry of Defence released figures purporting to show that Royal Air Force (RAF) Reaper drone strikes have killed an estimated 305 IS fighters since 9 November 2014, with zero civilian casualties. The exact wording of the MoD statement says:

“To date there have been no known [emphasis added] cases of civilian casualties resulting from UK strikes in Iraq. All strikes take place in accordance with UK Rules of Engagement and applicable law.”

Do these weasel words prove that there have been no civilian casualties from UK drone strikes?

In fact, the Ministry of Defence has no formal mechanism to track civilian deaths from any of its military operations in Iraq, Afghanistan, Pakistan or anywhere else – in violation of its obligations under the Geneva Conventions.

We now know that the picture of “precision” drone strikes surgically targeting and decapitating terrorist leaders is a total mythology.

Classified and confidential documents obtained by The Intercept on five months of “surgical” US drone warfare in Afghanistan reveal that drone attacks kill unidentified, innocent people literally “90 percent of the time”.

Intercept reporter Ryan Devereaux reported that many of these casualties are, however, categorised as “enemy combatants”, despite them regularly including large numbers of women, children and other civilians.

A few years ago, the New America Foundation claimed using data from “reputable news sources” that while the civilian death rate for drone strikes in Pakistan was about 50 percent in 2008, this by 2012 had declined to “at or close to zero”.

The newly leaked Pentagon documents exposed by The Intercept put paid to that claim, and demonstrate that media reports are, inherently, a highly selective and unreliable source of information on the true scale of casualties inflicted by Western military operations.

A year ago, the human rights law firm Reprieve found that 96.5 percent of casualties from US drone strikes across the Middle East were civilians, compared to just 3.5 percent being terrorists.

These findings vindicate the early warnings of former Pentagon counterinsurgency advisor David Kilcullen and ex-US Army officer Andrew Exum, that the kill ratio from drone attacks is roughly 50 civilians to every militant.

Kilcullen and Exum based their analysis on press reports indicating that drone strikes had killed about 14 terrorist leaders over three years, relying on Pakistani sources for an estimate of 700 civilians killed by drones in the same period. The press reports had largely not picked up the scale of civilian deaths.

Since then, Kilcullen and Exum’s ratio was largely rejected, as casualty data from press reports consistently failed to back it up.

Yet the secret US military documents passed to The Intercept show that this early analysis was far more accurate than the more conservative ratios based on press data.

According to four former US drone operators who had participated in kill missions in Iraq, Afghanistan and Pakistan, the slaughter of civilians in drone strikes was widely celebrated as part of an institutional culture in the Air Force. Children were seen as “fun-size terrorists”, and assassinating them by drone was equated with “cutting the grass before it grows too long”.

Michael Haas, a former senior Air Force officer, said that the killings were legitimised by dehumanising the victims: “There was a much more detached outlook about who these people were we were monitoring.” Drone operators were encouraged to develop “bloodlust,” and a trigger-happy approach to missions.

The leaked documents show how technocratic bureaucracy aided this process. As noted by Arjun Sethi, a professor of law at the Georgetown University Law Center, “dossiers of targets are condensed into ‘baseball cards,’ targets are called ‘objectives,’ objectives killed by drone strike are called ‘jackpots’ and a completed drone strike is consolidated and memorialised in a ‘storyboard’. All these terms trivialise drone strikes and dehumanise their victims.”

IS fighters use religious ideology, language and symbolism to dehumanise the “apostates” (murtadeen) and “disbelievers” (kuffar) they oppose. But “war on terror” warriors don’t need religion. They prefer the secular language of militarised technology, institutionalised bigotry and political ideology to dehumanise innocents as de facto ‘enemy combatants’.

The results are similar: mass deaths of innocents.

“There are 15-year-olds growing up who have not lived a day without drones overhead,” said Cian Westmoreland, another former senior US airman. “But you also have expats who are watching what’s going on in their home countries and seeing regularly the violations that are happening there, and that is something that could radicalise them.”

According to Republican Senator Lindsey Graham, a staunch supporter of drone strikes, their total death toll to date is around 4,700 people, which he claims are mostly militants.

Given the new evidence, however, tallied with the best studies of available public record data, 90 percent if not more of these deaths were likely innocents.

What’s worse, is that the newly leaked US government documents refute the self-soothing mythology that the CIA and the Pentagon do not know they are consistently murdering civilians in Iraq, Syria, Afghanistan, Pakistan, Yemen and Somalia.

When IS terrorise people, they demonstrate no shame in intentionally targeting civilians.

But “warrior” politicians are rarely as candid, preferring to conceal their intent behind layers of institutional decision-making that allow them to absolve themselves of the knowledge that their drones are mass murdering innocents.

Yes, IS are barbarians.

In their own way, though, so are the political masters of drone terror.

There is a crucial difference though: our barbarians are “civilised”.