From East to West, war on the hijab reveals gendered Islamophobia

Ibtihal Ramadan
Egyptian TV host Radwa El Sherbiny was investigated for promoting the hijab, while others have denounced it with impunity 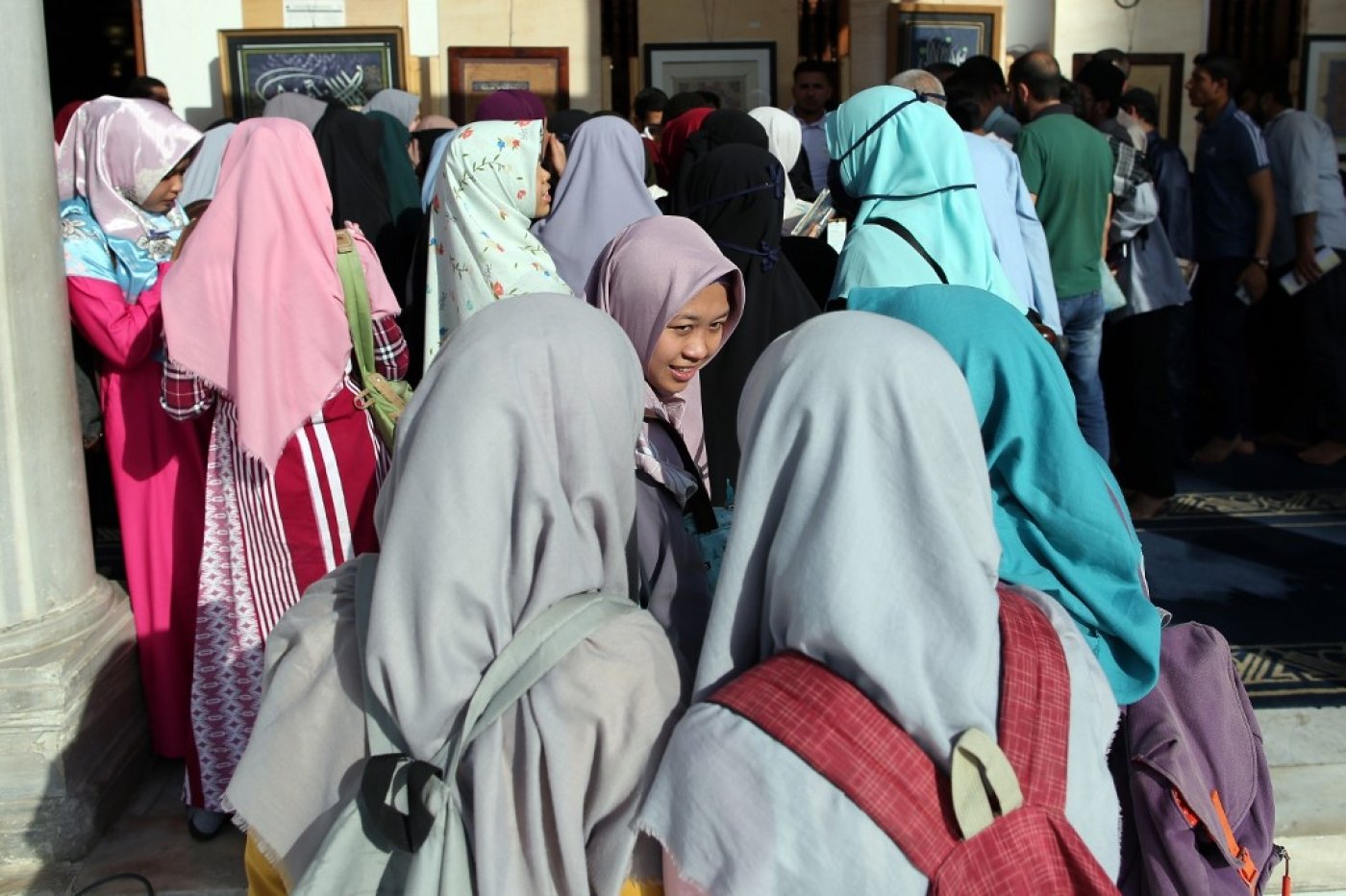 Radwa El Sherbiny - a famous, yet controversial Egyptian TV host who does not herself wear the hijab - recently asserted that a hijabed woman is 100,000 times better than a non-hijabed woman, as the latter, including herself, has surrendered to her ego and the devil.

She encouraged hijabi women who are facing social exclusion to maintain patience, suggesting they are viewed more favourably in the eyes of God. Her views not only stirred heated debate on social media, but also prompted an investigation by the Supreme Council for Media Regulation amid accusations that she was promoting hate speech. Sherbiny eventually apologised for her remarks.

Callous as they were, her words merely expressed a personal and candid view. Hypocrisy is evident in how “free speech” is filtered through gendered Islamophobia.

I define Islamophobia as a global colonial ideology to subjugate Muslims and deny their agency through pre-emptive or punitive means. Gendered Islamophobia is related to ways in which Muslim women’s bodies and dress, among other things, are scrutinised and regulated via systematic exclusion, intertwining old Orientalist tropes with the discourse of extremism.

Free speech in the UK comprises the “freedom to hold opinions and to receive and impart information and ideas without interference by public authority and regardless of frontiers”. When that expression incites hatred, harassment or discrimination against others, it becomes outlawed “hate speech”.

These cases underscore the hyper-politicisation of the hijab and the rise of gendered Islamophobia, particularly after 9/11 and the 2013 Egyptian coup

Yet, Prime Minister Boris Johnson’s infamous likening of Muslim women who wear the niqab to “bank robbers” and “letter boxes” indicates how free speech can be instrumental in igniting gendered Islamophobia. Johnson’s view betrayed two dimensions: while he disapproved of banning the niqab, in apparent support of Muslim women’s right to choose how to dress, he recognised it as an “oppressive” practice.

Defending his right to free speech, Johnson initially refused to apologise. His supporters perceived a potential apology as yielding to an extremist ideology that aims to shut down debates on difficult issues. Although Johnson did eventually apologise, just before the December election last year, his views aggravated gendered Islamophobic prejudice among the general public.

Attacks against the hijab and niqab by public figures and writers in Egypt are not strikingly different. There is no law mandating Muslim women to wear the hijab in this Muslim-majority country, yet anti-Muslim views go even further than western conceptualisations.

Feminist Nawal El Saadawi is a case in point. In support of a court ruling backing Cairo University president’s decision to ban the niqab amongst university lecturers and teaching staff, she said that the human face symbolises their dignity, and thus, covering it removes human dignity. When university lecturers cover their faces, this is a “dangerous type of backwardness,” she says. Do such comments not cross the line into “hate speech”? The West's curious obsession with the veil
Read More »

Similarly, journalist Cherif Choubachy has urged Egyptian women to demonstrate against the hijab, associating it with an era of backwardness in the country. Like Sherbiny’s views, his comments spurred controversy and caused offence - but there was no court investigation, and he was given a platform to discuss his views in a TV interview, where he said his call was primarily political, as suppressing the hijab would ultimately suppress attempts to Islamise Egypt.

This indicates a pre-emptive strand of Islamophobia. Choubachy’s version of liberation also veils sexism and patriarchy, as his campaign was initiated and led by a man who would, with other male guardians, “protect” the female anti-hijab demonstrators. While there is debate over whether the hijab is obligatory in Islam, the label of “hate speech” could equally be attached to those who denounce it as to those who promote it.

These cases underscore the hyper-politicisation of the hijab and the rise of gendered Islamophobia, particularly after 9/11 and the 2013 Egyptian coup. In the UK, whose version of secularism is more accommodating of minorities than that of countries such as France, there is an ongoing debate over potentially banning the hijab at schools and workplaces. Gendered Islamophobia is a common experience of hijabi Muslim women in the UK.

In Egypt, the public exclusion of hijabi women is becoming more common, often supported by state regulations - a punitive form of Islamophobia. Yet, amid heated debate on media platforms in response to footage showing a verbal attack against a burkini-wearer in a resort, such measures were recently played down by Ali Gunaim, a member of the Egyptian Tourism Federation, who noted that there is no ban on the burkini or hijabi women in resorts or hotels.

The extent to which such a declaration affects state legislation is unclear since there is a law in place that allows resort owners to use their discretion in banning the burkini.

A Facebook campaign, “Respect My Veil,” has documented discrimination against hijabi women in Egypt, posing an organic challenge to the notion that young hijabi women are oppressed. Similarly, the #HandsOffOurHijabs campaign in the UK has protested forcing hijabi women to remove the veil in airports.

In a nutshell, the investigation of Shirbiny suggests that free speech is malleable to power and utilised to subjugate Muslims in a context of global Islamophobia. Doubtless, Sherbiny would not have been investigated had her views not dissented from the proclaimed stance of President Abdel Fattah el-Sisi, who has called to reform (read: contain) Islam - and by extension, contain the hijab, a symbol of Islam.

With the gendered Islamophobic remark of “go back home” that is common to the experience of hijabi women in the West, Sherbiny’s case makes me wonder whether hijabi women will ever feel at home amid an ongoing “war on terror”.

Ibtihal Ramadan is a postdoctoral researcher at the University of Edinburgh. Her research interests focus on Muslims in the West, Islamophobia, anti-Muslim racism, Muslim identities, and inequalities in education.