Maged Mandour
The cuts to bread subsidies announced by Sisi will hit 63 million Egyptians. The military elite, backed by repressive state violence, no longer feels obliged to look after its citizens 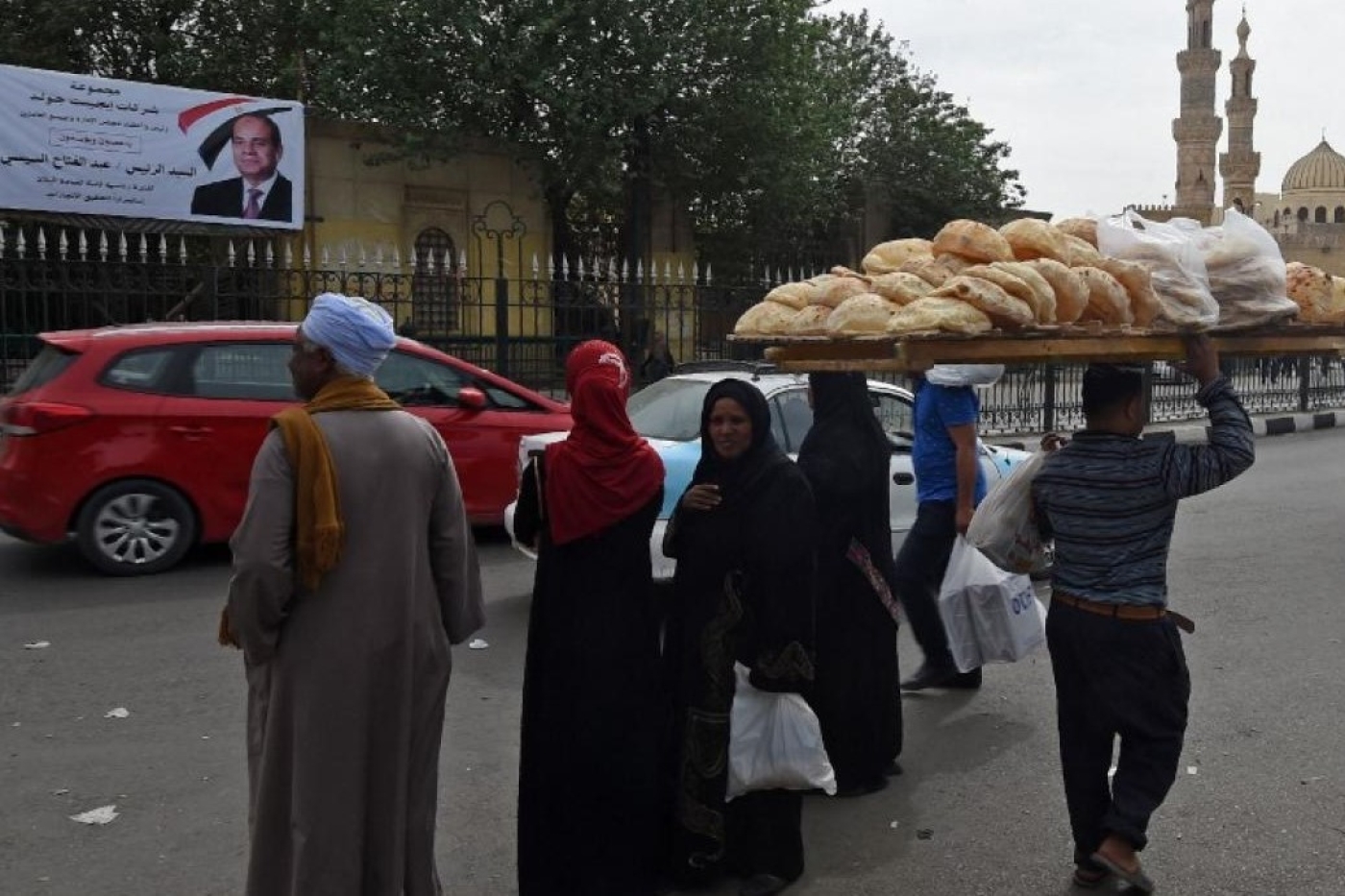 A bread-seller walks past a poster of President Abdel Fattah el-Sisi, in front of al-Azhar Mosque, central Cairo, on 23 March 2018 (AFP)

On 3 August, Egypt's President Abdel Fattah el-Sisi declared his intention to raise the price of subsided bread, breaking a promise he had made to Egyptians five years earlier that there would be no such increase.

The hike in bread prices is expected to increase poverty rates by between 4 and 5 percent, based on predictions made by Heba al-Laithy, head of the Central Agency for Public Mobilisation and Statistics.

Official poverty rates in Egypt stand at 29.7 percent. The increase in the price of subsided bread will raise poverty to unprecedented levels and will affect the 63 million Egyptians who receive food subsidies - which include five loaves of subsidised bread per person per day. This will be the second increase in bread prices Sisi has imposed. The first one came in August 2020, disguised in the form of a decrease in the size of a loaf by 20g.

The price increase will not carry significant fiscal benefits for the government, as the outlay on bread subsidies in the 2021/2022 state budget stands at 44bn Egyptian pounds ($2.8bn) - or 2.4 percent of total government expenditure, and 9.4 percent of the expected deficit.

Bread subsidies also constitute only 4.4 percent of the total tax revenue collected by the state. Placing this number in context, for example, the cost of loan repayment interest stands at 579bn Egyptian pounds (over $36bn), more than 13 times the value of subsidised bread.

Rather, the price hike is motivated by politics and the nature of Egypt's military-dominated political economy, which depends on debt rather than labour exploitation as a driver of economic growth.

End of the social contract

The increase in the price of subsidised bread breaks a taboo in Egyptian politics, which has been in place since the deadly bread uprising of 1977. That uprising broke out after then-President Anwar Sadat increased the price of subsided food, including bread. The protests forced Sadat to reverse his decision within a few days.

The issue is extremely politically sensitive. Egyptian families spend an average of 37.1 percent of their income on food, with the poorest 10 percent of the population spending 49.7 percent. Even a slight increase in prices will have a significant impact on living standards.

Despite the popular anger this will generate, Sisi must feel confident and entrenched enough to begin this onslaught on what remains of public welfare and subsides

Subsidised bread is also one of the remaining vestiges of the social contract between the autocratic state engineered by President Gamal Abdel Nasser and ordinary Egyptians, where the state was expected to provide basic services and economic security in return for political obedience.

In this context, Sisi is declaring his intention to do away with any remnants of this social contract, dispensing with mutual cooperation and instead planning to use his regime's coercive apparatus and repression to enforce political acquiescence. Despite the popular anger this will generate, he must feel confident and entrenched enough to begin this onslaught on what remains of public welfare and subsides; an onslaught even more vicious than the previous round of subsidy cuts.

The regime's determination to cut public spending and reduce the budget deficit is driven by the military-dominated Egyptian economy; a military that has aided economic growth through heavy investment in real estate, infrastructure and transportation. This includes the $58bn new administrative capital east of Cairo, a new $23bn railway line and an $8bn new Suez Canal.

The total debt-to-GDP ratio reached 90 percent in 2020, placing significant strains on the state budget, as the cost of interest on loans will consume 31.5 percent of state expenditure in 2021/2022. This places huge pressure on Sisi's administration to cut public spending, in order to meet its debt commitments and to maintain its creditworthiness so that it can continue its borrowing spree.

The situation is compounded by an underperforming non-oil private sector, which has been contracting for most of the past five years, due to weak local demand and export orders. This weakens the tax base of the state, further increasing the pressure to cut public spending.

Egypt's tax-per-GDP ratio (the measure of a nation's tax revenue relative to the size of its economy) in 2018 reached 16.7 percent, far lower than the OECD average of 34.3 percent and lower than neighbouring Tunisia and Morocco, which reached 32.1 and 27.8 percent respectively.

This is all complicated by a large informal economy, which is estimated to constitute 30 to 40 percent of GDP - a higher proportion than other regional economies - the regressive nature of the Egyptian tax system and the plethora of tax exemptions offered to large military-owned enterprises, making it difficult to raise socially just taxes.

A debt-fuelled economy driven by military-dominated growth also means an economy largely unaffected by the lower levels of local demand which invariably follow an increase in poverty rates. For example, from 2015 to 2018, the level of consumption per family in Egypt dropped by an average of 9.7 percent, while GDP grew by an average of 4.5 percent. This decoupling of economic growth from domestic consumption frees the government to make deep cuts in public spending.

This form of growth will only increase poverty, shrink the middle class and weaken the private sector, while enriching the military elites

The weakness of local demand is also not compensated for by an increase in the export sector, which has been underperforming, despite a massive currency devaluation in 2016.

Finally, the economic activity Sisi's regime has focused on, ie the mega, labour-intensive constructions projects over developing the tech sector, for example, does not require a skilled labour force, with its commensurate investment in education and human development. A telling statistic is the level of unemployment among the illiterate workforce, which in 2019 stood at 2.2 percent compared to 16.7 percent for university graduates.

This form of growth will only increase poverty, shrink the middle class and weaken the private sector, while enriching the military elites. Wealth will continue to be transferred from the Egyptian working and middle classes to the debt holders, through interest payments, as the military elites entrench themselves within the state apparatus and rely on repression to crush protest.

This makes the international financial system and regime creditors direct accomplices in the impoverishment of ordinary Egyptians - and directly responsible for any possible future unrest.