Egyptian patience with Sisi has snapped over two small islands

Basheer Nafi
Mass anti-government protests across Egypt last Friday were the first to unite the people in years. More are set to come despite crackdown 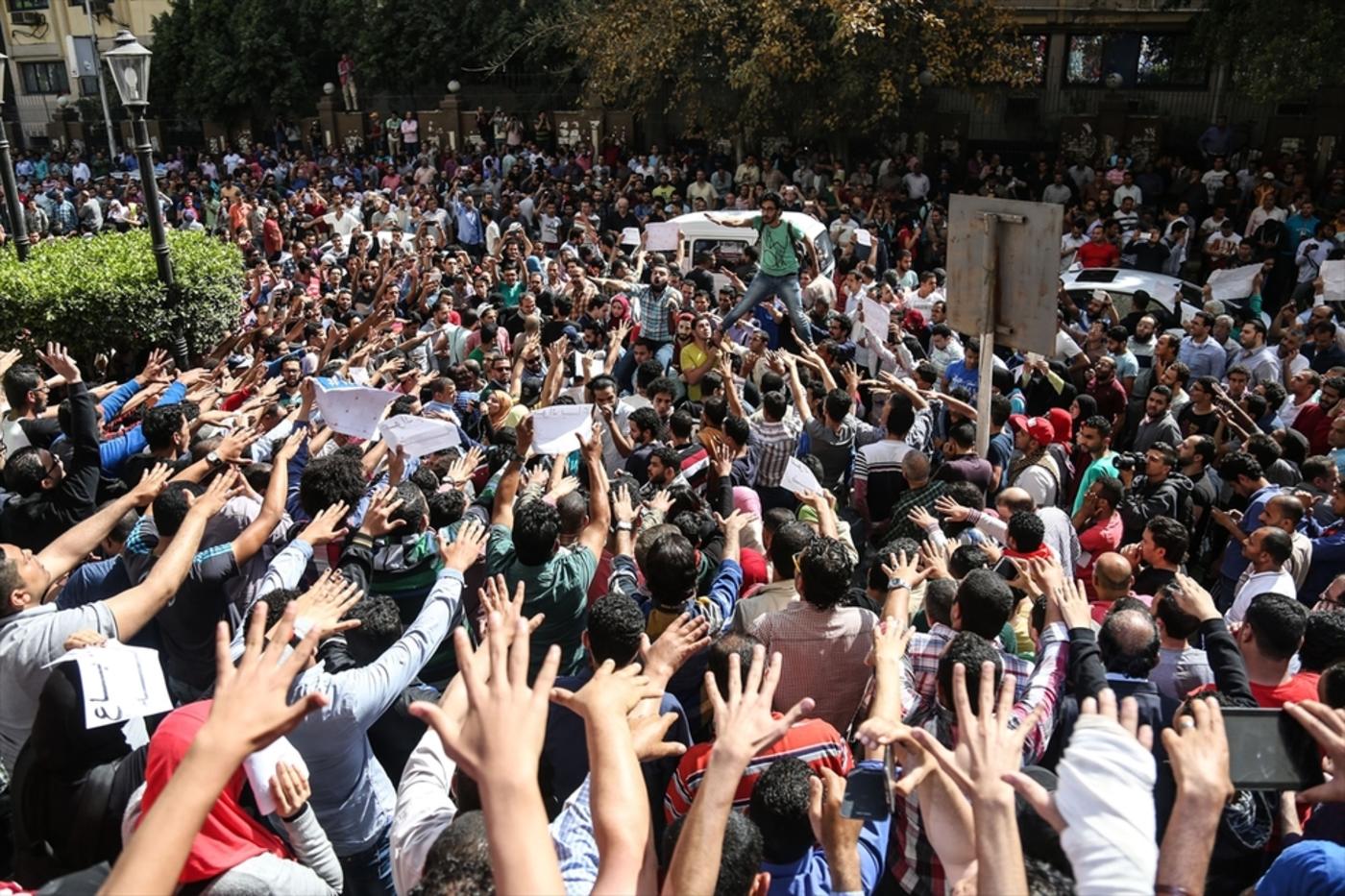 Last Friday, a large number of mass rallies erupted across all Egyptian cities, including Cairo.

These type of protests set a new precedent in terms of popular marches since the 3 July, 2013 military coup, but not in terms of the size of the crowds or the placards on display.

Mass rallies organised in the days and weeks following the coup were much bigger, and signs bearing slogans such “leave” and “bring down the leadership” were also a familiar sight.

The key difference in that protests which followed in the wake of the coup (and which have continued non-stop sporadically since the bloody storming of the Raba’a sit-in) were mostly confined to the Islamic street.

Last Friday’s demonstrations, in contrast, attracted the participation of Egyptians from all walks of life, including those who had previously supported the coup and paved the way for it, unwittingly or consciously.

This was a true moment of confrontation between the post-coup leaders and the people, a confrontation that Cairo has tried over the past three years to avert with all means at its disposal.

The current government has failed to establish any lasting legitimacy over the past three years. In total ignorance of what a state should represent, its leaders believe that legitimacy is a purely legal matter and that holding sham presidential elections - and undertaking a series of visits to a number of European states - provide the necessary de facto recognition.

The Sisi administration’s problem, even at the purely legal level, is former president Mohamed Morsi’s refusal to accept the new leadership and his persistence that it was a coup against the people’s will.

The leadership’s head could easily travel from Rome to Paris and from Berlin to London. Yet, it was obvious in all his foreign visits that the leaders of the Western countries that received him were shrouded in embarrassment for this reason or for another.

Furthermore, the Western media never ceased for one day to describe him as the coup leader. Then came the incident of the murder of Italian student Giulio Regeni, which has exposed the scale of the leadership’s crisis - and a crisis among the leaders of the European states who opened the doors of their capitals to the Egyptian leader.

No ruling leadership can achieve stability without establishing a legitimacy that is sufficient for it to continue managing the affairs of the state and securing the support of the majority. Legitimacy is not to be found on the pavement. It is born, then it grows and is built. Governance acquires its legitimacy from established norms that are agreed upon with regard to the manner of managing the state, as in the case of democratic systems of governance.

Legitimacy can also be derived from a national struggle for freedom and independence, as happened in Third World countries during the era of liberation from foreign colonialism. Similarly, it can be the outcome of popular revolutions against despotism that eventually fulfil the material and moral ambitions of the people, such as the attainment of economic welfare or expressing the sentiment, values and aims of the majority. This would also include the attainment of security and social stability for the population as a whole.

There is no doubt that the 3 July coup leadership, which toppled a leadership that was born out of the popular legitimacy whose foundations were laid down by the January 2011 revolution, failed three years after its inception to establish a new legitimacy.

In the absence of such a legitimacy, the ruling leadership seemingly has no other means to maintain their existence other than unleashing the tools of oppression and hegemony, using force and instilling horror in the hearts of the majority. Hence the significance of last Friday’s uprising in Egypt.

The demonstrations were called for by Islamic and non-Islamic forces in protest against the special agreement which saw Egypt cede the islands of Tiran and Sanafir, which are located at the southern entrance of the Gulf of Aqaba, to Saudi Arabia.

New demonstrations are set for Monday but the Egyptian authorities have already began a wave of arrests targeting activists who are suspected of promoting the protests.

The leadership says that the two islands originally belonged to Saudi Arabia and that the two countries agreed in 1950 that Egypt would manage them due to the lack of a Saudi naval force to protect them from the Israeli threats at the time.

Despite this historical justification, it is obvious that the Egyptian majority believes that giving up the two islands is nothing but part of a deal by which Saudi financial aid is received by a minority-dominated corrupt leadership that is incapable of managing the affairs of the country.

However, the protest movement, which adopted a collective national character, and which is expected to return once more on the anniversary of the liberation of Sinai on 25 April, cannot be explained solely in terms of the protest against the abandonment of two islands.

There is no doubt that Egyptian national sentiments escalated in a manner unseen for decades within few days of the disclosure of the Saudi-Egyptian agreement. The leadership was accused, even by some media outlets that are known to be loyal to it, of conceding national soil. Yet, the size and extent of the protest movement indicate that the question of the islands was nothing but the straw that broke the camel’s back, as the Arabs would say.

There has been an ongoing deterioration in the situation within Egypt since the 3 July 2013 coup. The decline has been economic and fiscal as well as in the areas of security, liberties and human rights and in Egypt’s standing and regional role.

During the one and a half years that followed the coup, the massive flow of Gulf financial aid and the anti-Muslim Brotherhood propaganda campaign helped to contain some of the failure in managing the country’s affairs as well as the return of the ruling minority to power.

However, the Gulf support declined markedly last year and soon the Egyptians as a whole started feeling the burden of the economic and fiscal crises. The evaporation of the promises of security and stability was no less conspicuous than the evaporation of welfare and dignified living.

Sinai turned into an arena of war and daily death. The policy of arbitrary detentions, oppression and torture soon extended to include even those who once supported the coup as well as foreign nationals. The coup reflected a moment of actual division within the ranks of the Egyptians. However, the policies of the ruling minority led to a tangible decline in the number of people who rallied behind the coup leadership in the hope of banishing the Islamists from governance and re-drawing the political map.

The political division of 2013 has changed, increasingly, into a mere division between those who are prepared to confront the leadership and those who are still prisoners of fearing the consequences of confrontation. The issue of the islands broke the barrier of fear and drove tens of thousands of Egyptians into the arena of confrontation.

This is not the end of the coup yet. Moving Egypt away from a minority rule to majority rule requires a long and laborious struggle. Yet, the 15 April protests provided further proof that Egypt, just like its Arab neighbours, did in fact change in the decisive months of 2011.

It changed because the post-Ottoman leadership, and the regional governments upon which they relied, are no longer capable of continuing. No matter how brutal and vicious the counter-revolutionary forces may become, it is no longer possible to establish legitimacy on the same foundations that millions of people took to the streets in order to bring down in 2011.

Photo: Egyptians protest against their government decision to hand over control of the two strategic Red Sea islands of Tiran and Sanafir to Saudi Arabia, in front of the Press Syndicate building in Cairo on 15 April, 2016 (AA).