First we take the White House: The rise and rise of Steve Bannon 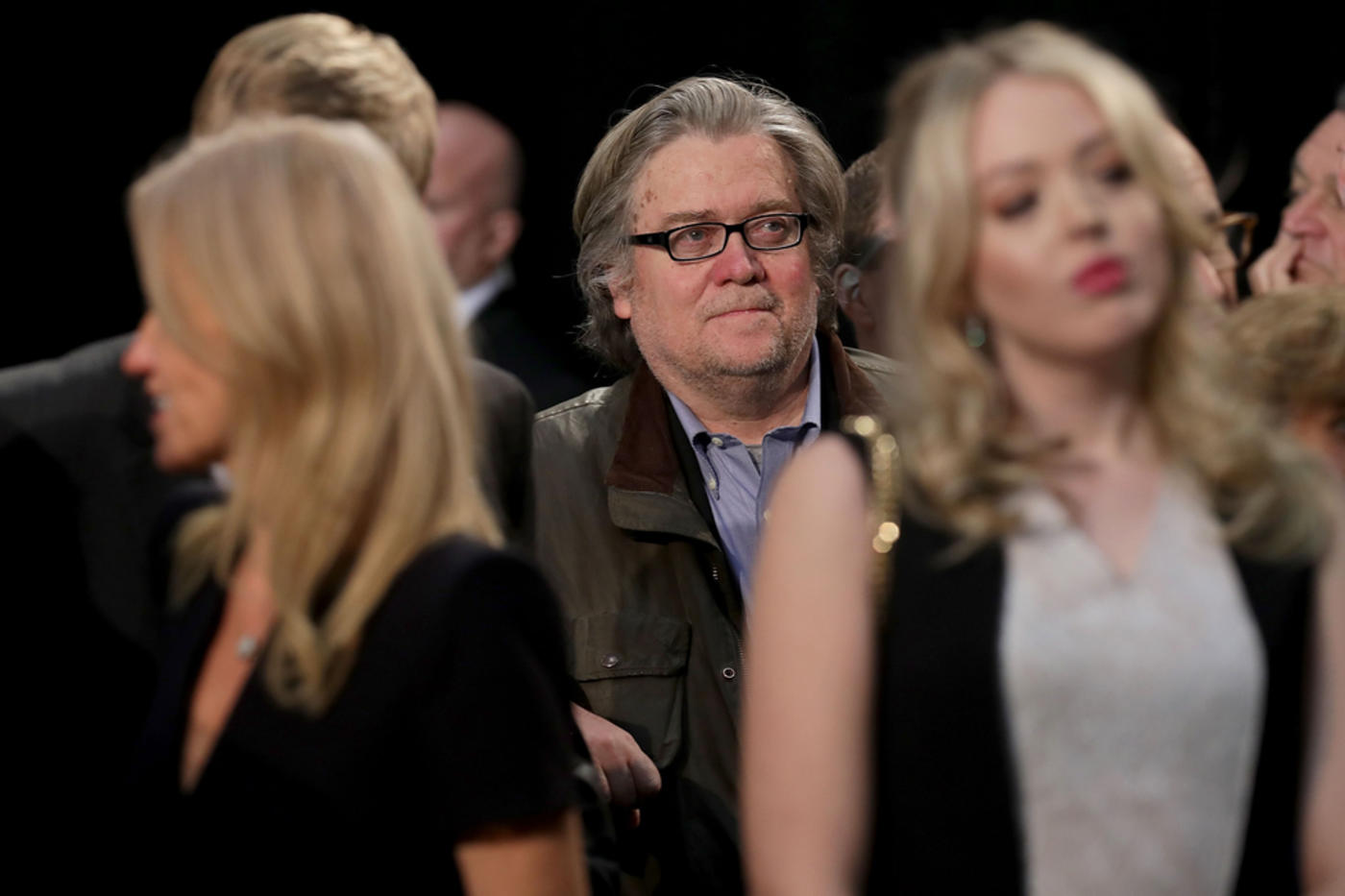 It is a great pity that Leonard Cohen died the week that Donald Trump was elected president and anointed Stephen Bannon his right hand White House man. Cohen would have relished the story line and I can’t help but wonder what sort of song the poet in him would have produced.

Lines from his 1988 hit “First We Take Manhattan” keep running through my head: “They sentenced me to twenty years of boredom/For trying to change the system from within/I'm coming now, I'm coming to reward them/First we take Manhattan, then we take Berlin.” Once, when asked what the song meant he replied: “This is a geopolitical plan. People have asked me what it means. It means exactly what it says.”

In essence Bannon is the self-made man, rising from impoverished childhood to become arguably the second most powerful figure in the world

So forgive me for thinking there is much in the Bannon character that Cohen would have enjoyed and toyed with in his savagely funny and darkly satirical way.

And the facts are these: in August, 2016 Bannon took control of a floundering Trump campaign and pointed it in the direction that would ultimately lead to a stunning election victory. Forget about attacking Muslims and Mexicans, reinforce the message that Hillary Clinton is crooked.

He knew that Clinton was vulnerable because for the past several years Breitbart News under his guidance had deeply researched the often unsavoury relations between the Clintons and their Clinton Foundation. The research was handled by a sister organisation, the Government Accountability Institute (GAI) staffed by a strong team of investigative journalists. Bannon fed Clinton stories to the establishment media, outlets like The New York Times, Time magazine, ABC’s 60 Minutes – news organisations it is claimed he despises.

He understood that stories about Clinton malfeasance gained much more traction when they ran in so-called respectable, mainstream organs and not his Breitbart News

Despise them he may, but he well understood that stories about Clinton malfeasance gained much more traction when they ran in so-called respectable, mainstream organs and not his Breitbart News which is often, and rightly, associated with the alt-right world of anti-Semitism, white supremacism, neo-fascist nationalism and Islamophobia.

Here is another fact: Bannon correctly identified Nigel Farage as the true face of the Brexit campaign, unacceptable and outrageous to many, including mainstream Brexiteers, but the man who really got the anti-Europe, anti-immigration, anti-Muslim vote out. The Breitbart News London bureau had become a cheerleader for Farage well before Brexit but Bannon appreciated the “shock and awe” tactics of Farage, his mixing of fact, fiction and lies during the campaign, culminating in the infamous “Breaking Point” poster.

And so it was that the first British politician Donald Trump deigned to talk with was Nigel Farage. Cue horror from the British political elite and mainstream media with Farage being able to crow on ITV “I do have a relationship with (Trump) and with some of his team. I’ve got connections and I would like to help.” Deploring the response of the government to his kind offer, the erstwhile UKIP leader added “common sense has it that if you have a route in, you use it.”

So the oft-derided Farage is back in the limelight, basking in the attention, stirring up headlines and outrage in equal measure, making Theresa May and her uncertain band of Brexiteers very uneasy indeed. Precisely the sort of response Steve Bannon revels in.

But Nigel Farage is not the only populist politician to have caught his eye this side of the Atlantic. Breitbart News is poised to open bureaus in Berlin and Paris. And it is a very safe bet that Donald Trump’s chief strategist will ensure Marine Le Pen’s National Front receives the kind of effusive coverage that Breitbart afforded Farage. Equally the Berlin bureau will savage Angela Merkel as she struggles to retain control of her party and the chancellorship, while at the same time Breitbart News champions the cause of the anti-Muslim, Euro-sceptic Alternative for Germany (AfD) party.

Steve Bannon, a man who rose from a humble working class background, through a stint in the US navy, to Wall Street banker and then to Hollywood producer has always had his eye on the big picture. He first encountered Andrew Breitbart, the founder of Breitbart News, in Los Angeles while making current affairs documentaries about, among other subjects, Ronald Reagan.

As Joshua Green in a Bloomberg profile noted, Bannon “marvelled at Breitbart’s visceral feel for the news cycle and his ability to shape coverage”. He quotes Bannon as saying:  “Our vision - Andrew’s vision - was always to build a global, centre-right, populist, anti-establishment news site.” When Breitbart died of a heart attack in 2012 aged just 43, Bannon took control of Breitbart News and propelled it into the pre-eminent alt-attack voice for America’s angry and alienated conservatives.

Along the way, he has had his fair share of luck, including acquiring the syndication rights and a share of the royalty payments to Seinfeld, the hit US comedy with a hip left-liberal New York sensibility. (Cohen would have had fun with that irony). But in essence Bannon is the self-made man, rising from impoverished childhood to become arguably the second most powerful figure in the world. He is the Horatio Alger story writ large.

Bannon sees a new global narrative emerging, one that deconstructs old power bases, be they the coastal elites of the United States, the world of Washington insiders or the European Union

The outsider in him is drawn to other outsiders, fellow travellers like Le Pen and Farage, and the Dutch extremist Geert Wilders whose Party for Freedom stands poised to take the largest number of seats in the Dutch Parliament. And of course to Donald Trump, the vulgar billionaire who gate crashed the liberal elite and the Republican political establishment all the way to the White House.

In them, Bannon sees a new global narrative emerging, one that deconstructs old power bases, be they the coastal elites of the United States, the world of Washington insiders or the European Union and the Brussels establishment that runs it. They are the enemy and the enemy of your enemy is your friend.

And so, like his boss, Bannon is keen on Vladimir Putin and does not have a problem with a Syrian peace deal that includes Bashar Assad. Nor does he mind rattling Saudi Arabia, airing various attacks on America’s close ally on his Sirius XM Patriot radio programme, including the claim that Hillary Clinton advisor Huma Abedin is a Saudi spy.

As he prowls the corridors of the Oval Office, I can almost hear him humming “First we took the White House, now we take the world.”

Donald Trump’s chief strategist plays the role of wrecking ball with a zealot's desire to demolish the existing world order. What arises, should he realise his narrative, is a new world order, driven by patriotism and a fierce urge to look after your own, a neo-nationalism that endlessly smears Muslims and strives to turn back the clock on free trade and globalisation, a world where military might counts for far more than diplomacy and compromise. A world where liberalism is run out of town.

Make no mistake, Trump's chief strategist and old world order iconoclast has a global vision. The worry is it is disturbing and very dark and Steve Bannon could not be better placed to pursue it. As he prowls the corridors of the Oval Office, I can almost hear him humming “First we took the White House, now we take the world.”