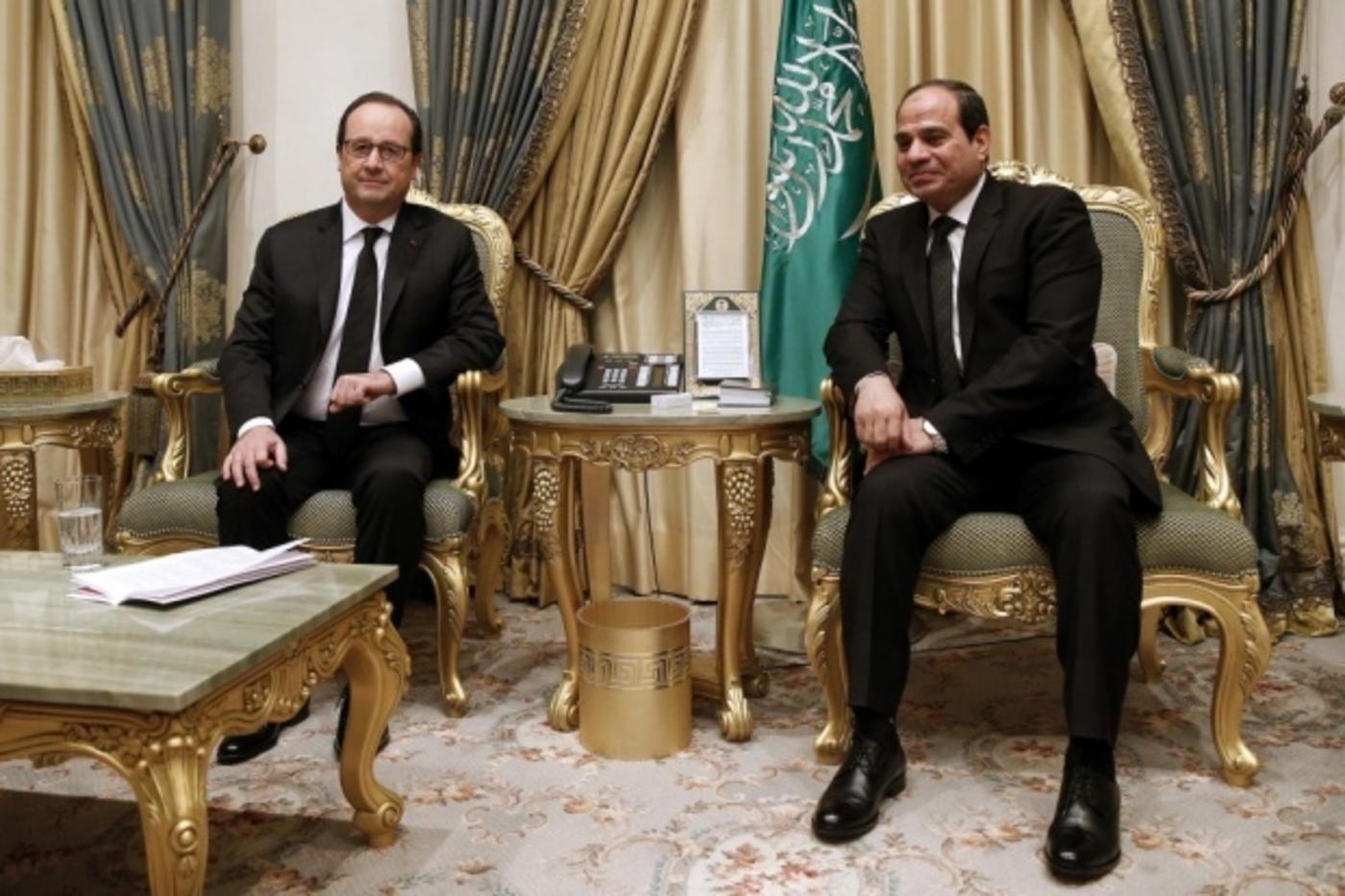 France these days claims the status of a “human rights motherland,” but we can legitimately ask why. The observer of French foreign policy, expert or otherwise, will struggle to find concrete examples of implementation of this “human rights credo”.

From Charles de Gaulle to Nicolas Sarkozy, realpolitik has always prevailed over those “principles” in French foreign policy. Any hope to see François Hollande reorienting this tendency seems pointless. France does indeed continue to excel in its tradition as a major arms supplier at the international level. This remains the case especially in the post “Arab Spring” Middle East.

France had been slow in making public a clear and coherent position regarding the “Arab Spring”. Nicolas Sarkozy finally showed his preference for supporting the authoritarian regimes in the Arab world, supposedly an efficient way to counter the rise of “Islamists”.

The fall of the Tunisian and Egyptian presidents in early 2011 showed his initial conception to be a vain one. Paris quickly converted to being a supporter of the uprisings with its leading role in pushing for military intervention in the overthrow of Libyan leader Muammar Gaddafi, even if it meant allying with actors following an Islamist ideology.

Since then, and despite the missed gamble of the Hollande presidency on what it considered the irrevocable fall of Syrian President Bashar al-Assad – through the erroneous judgment of the Minister of Foreign Affairs Laurent Fabius and apparently lots of his advisors - France again confirmed its preference for authoritarian regimes in general, and of those who fill in military purchase orders in particular. Numbers related to the French military industry are eloquent as such.

France has been among the main arms suppliers in the Middle East and North Africa (MENA) for more than a decade. From 2005 until 2010, it rose to the rank of third supplier in the region after the United States and Russia.

For the 2003-2012 period, Saudi Arabia also has been the leading French Middle Eastern client for defence procurement, followed by the UAE, Morocco (9th client), the Sultanate of Oman (15th client) and Qatar (20th client). However, all those numbers don’t take into account nuclear agreements (not figured) that Paris signed with Algeria, Saudi Arabia, Egypt, United Arab Emirates, Jordan, Libya, Morocco and Tunisia.

The 2014 increase - a 17.3 percent increase compared to 2013 with a €8.05bn total in arm sales abroad, according to the French Defence Procurement Agency - should be confirmed in 2015 with Saudi support.

If those sales for 2014 were pushed up thanks to Saudi Arabia financing of a €2.65bn contract on French arms deliveries in Lebanon, 2015 also starts with stunning news for the French industry: €5.2bn-worth of orders from Egypt, indirectly financed by Gulf countries subventions, that could largely help France in exceeding €10bn of military orders for 2015.

At least François Hollande is consistent in prioritising the domestic situation rather than the international one each time he reminds the world of the pivotal role of human rights in France.

The realpolitik has indeed continued prevailing in the French President’s behaviour vis-à-vis Middle East affairs, with two objectives in sight: promotion of operations aiming to ensure the stability in conflict zones, particularly when those bring out French interests and/or its image, and the positioning of France as a main Middle East partner regarding defence matters.

France thus made itself the champion of a diplomacy yearning to bring the Middle East back to the stability it was still enjoying in late 2010. This positioning requires, on  paper, Paris maintaining friendly relationships with the overwhelming majority of Arab leaders and governments.

A strengthening of diplomatic relations was thus prioritised with members of the Cooperation Council for the Arab States of the Gulf, including Morocco, Algeria – both vital partners in the fight against terrorism in the Sahel – as well as Tunisia, Egypt, Jordan and Lebanon.

Regarding the Syrian exception, it can mainly be explained by the difficulty France would have in going back on its confrontational policy vis-a-vis a regime whose legitimacy it has been questioning, in parallel with maintaining a message of not compromising on the principles of human rights.

According to Quai d’Orsay, nobody other than Bashar al-Assad is guilty of the death of 200,000 Syrian civilians. France can then hide the contradictions of its regional policy by pointing to the Syrian case as proof of its tenacious attachment to political change taking into account the yearning of the Syrian population.

The presumed responsibility of Paris in reinforcing militant groups taking part in the radicalisation of the Syrian political opposition (al-Nusra Front, Islamic Front), whether directly – which is hard to prove due to a lack of transparency on the French side – or through some of its allies - Qatar, Saudi Arabia - is not in doubt. Notwithstanding, Paris seems at the same time to be engaged in a security cooperation strategy with Damascus aiming at limiting the impact related to the return of jihadists to French and European soil.

The creation of the Islamic State has the “advantage” from the French perspective of giving legitimacy to the thesis that negotiating with authoritarian leaders in the region is necessary to limit the progress of the jihadist movements.

Thus Paris ends up seeing itself engaged on various fronts explained by the needs of the war against terrorism. In the Sahel, Operation Barkhane led by France with 3,000 soldiers in partnership with five former colonies (Mauritania, Mali, Burkina Faso, Niger, and Chad) has the stated goal of fighting against terrorism in the whole Sahel. Paris is as concerned to maintain close ties with Algeria, a country whose stability is important for the sub-region and whose secret service action (in Libya, and particularly in northern Mali) is important to guarantee an effective regional anti-terrorist war.

In Iraq, Operation Chammal, through which France is taking part in the international coalition put in place by the United States to support the Iraqi armed forces to contain the progress of the “Islamic State,” is motivated by the same objectives.

Finally, France's lack of insistence on the virtue of political transparency, “good governance” and respect of human rights is at the same time a guarantee of outlets for its military sales. Today’s prospects for arms-related profit never have been as stunning. The 5,000 kilometres that Defence Minister Jean-Yves Le Drian is famous for having travelled since he was appointed will very likely be followed by as many trips in the next few months in order to maintain promising commercial defence prospects. Nevertheless, it remains to be seen if, in parallel to these commercial considerations, France can pretend to hold on to the keys to an effective Middle Eastern policy.

Considering the nature of its political and geopolitical choices in the Middle East, there is a kind of coherence to the French policy. Its importance as an arms supplier for the region combined with a military strategy aiming at fighting against regional terrorist networks require it to exclude ideological aspects such as human rights in favour of  clear cooperation with authoritarian regimes seemingly as inflexible vis-a-vis radicalism and its terrorist manifestations as is France.

The fact that France accepts Egyptian President Abdel Fattah al-Sisi’s anti-Muslim Brotherhood policy, whereas it had counted on those same people coming from that same ideological stable in order to overthrow Gaddafi, is just one contradiction that nobody seeks to remember today.

Paris’s openness to countries suspected more and more of supporting radical movements in the region - Saudi Arabia, Qatar - follows the same line. It is as if the war against terrorism had its reasons that reasoning does not know.

The fact that France has been victim of the Charlie Hebdo murderous terrorist attacks, and the emotion that has continued since, inscribes itself on the same path. France sees even more reasons to assert its right to adopt exceptional measures in the name of the “war against terrorism”.

It seems that we are finding the same echos of the post-9/11 Bush administration attitude.

Prime Minister Manuel Walls, champion of the reform of the intelligence service’s frame of operations, promised that his country would avoid falling into the vices of a French-style “Patriot Act”. However, the first intended measures in that process have reinforced the means available to the intelligence service in terms of expanding its powers in the fight against terrorism.

The dynamics of the French contradiction are already obvious, and they will be maintained. France will never give up its links with the Arab authoritarian regimes, especially not in a moment when in return it is the beneficiary of juicy rewards and is given an active role in the region where it used to reign as a colonial power. But it should not be deduced from this that France will push the limits of what could qualify as arrogance.

The “Hollande momentum” could only exist in such a context where Middle Eastern turmoil gives justification for an increasing engagement of military forces that are well equipped, internationally influential and little bothered by human rights.

France is, and will stay, far from being able to occupy an equal stature in the region as the United States for lack of resources and ambitions. We can also make an analogy between French policy in the Middle East and the strong impression left by the election of François Hollande in 2012: because of a confluence of events it finds itself where we weren’t expecting it. Notwithstanding, nothing indicates that this moment will last.

- Barah Mikaïl is Senior Fellow at FRIDE (www.fride.org) and assistant professor at the University of Saint Louis, Madrid, Spain. Previously, he worked at the Institut de Relations Internationales et Stratégiques (IRIS, 2002-2011). He is the author of several books and specialist publications, including his latest book, Une nécessaire relecture du 'Printemps arabe' (Cygne editions, 2012). 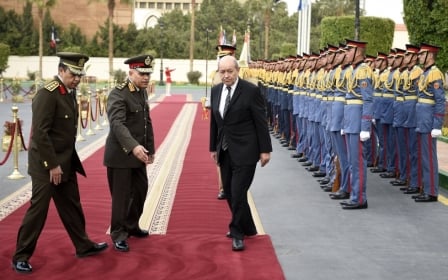