Richard Silverstein
A source confirms that Israel has growing ties with Libyan strongman Khalifa Haftar, including carrying out strikes against IS in Sirte 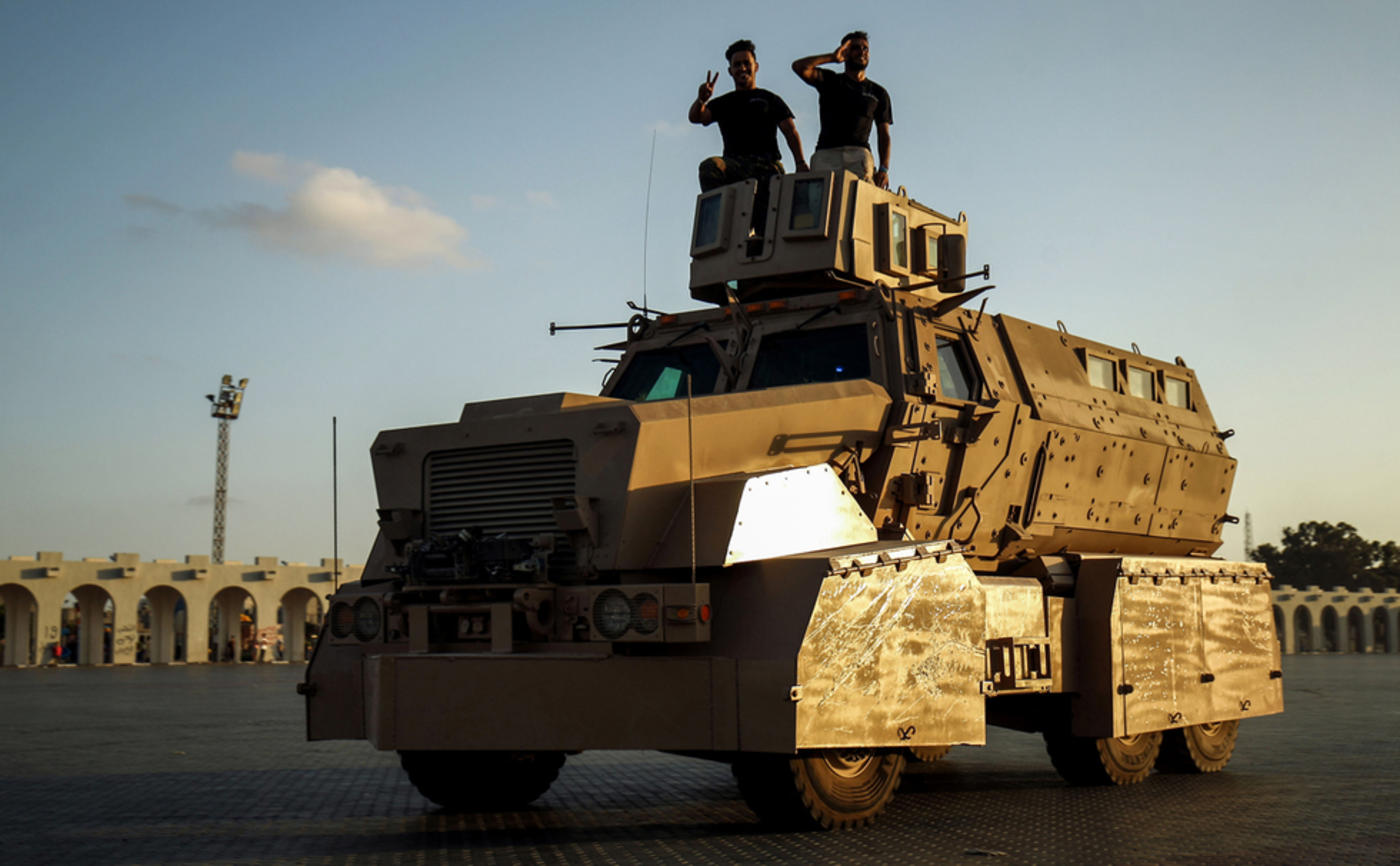 A well-informed Israeli source - who requested anonymity, considering the matter is censored by the Israeli military - tells me that the IDF has bombed Islamic State military positions (Google translation) in Libya on behalf of strongman General Khalifa Haftar (read a more comprehensive profile here).

The IDF military censor determined that the information cannot be published in Israel. Until this week, the censor wouldn’t even permit Israeli journalists to refer to foreign media reporting on this story. In recent days, Yediot Aharonot published a flattering profile of Haftar which referred to a Kuwaiti article in al-Jarida, linked above, confirming these reports. Under Israeli censorship provisions, journalists prohibited from directly reporting on certain events often may refer to the same events via foreign publications and so skirt censorship.

Israel has a natural affinity for Middle East strongmen with little or no religious or ideological commitments - Jordan’s Abdullah, Egypt’s Mubarak and al-Sisi

The reports provide mounting evidence of direct Israeli intervention in the multi-sided Libyan civil war between Haftar, Islamist militias and Islamic State. My requests for comment tweeted to the IDF spokesperson unit and Lt Col Peter Lerner were unanswered at the time of publication of this article.

'A friend of our friend'

Haftar is aligned with Sunni states, most notably Egypt and the United Arab Emirates, which are also reported to have bombed Libyan forces hostile to Haftar. The latter is sometimes called the "Libyan al-Sisi". The Israeli source confirmed to me the Kuwaiti newspaper's story, saying Israel offered direct military aid on behalf of Haftar, including air attacks on IS positions in Sirte and elsewhere.

An IDF source told my contact: "A friend of our friend - and an enemy of our enemy - is our friend, and Haftar is a friend of Egypt, Jordan and UAE. He also fights ISIS."

The Israeli censor even prohibited quoting this report from the Kuwaiti paper al-Jarida's Jerusalem correspondent, which was probably leaked by Israeli sources. The report, dated 27 August 2015, says Israel bombed Sirte on 25 August 2015:

Informed sources said that two days ago Israeli warplanes bombed ISIS targets in Sirte. They added that the raid followed a request made by Gen. Khalifa Haftar, commander of the Libyan National Army during his recent visit to Amman [where he secretly met Israeli security officials]. The sources said Haftar promised [in return] to sign oil deals and arms deals with Israel

Lest anyone believe that events of 2015 have changed, the New Arab reports that Haftar met recently with Mossad officials at a meeting brokered by the United Arab Emirates, one of the Sunni allies I mentioned above. "Coordination between Haftar and Israel has been ongoing, he held talks with Mossad agents in Jordan in 2015 and 2016," the anonymous source told the New Arab.

The report claimed that the meetings were mediated by the UAE and that Haftar met with Israeli intelligence agents. It claimed that Haftar's self-styled Libyan National Army had received Israeli sniper rifles and night vision equipment. It further hinted that there may have been coordination between Haftar's command and the Israeli military during the offensive against several jihadist groups in Benghazi in mid-2014, known as Operation Dignity.

During the fighting, one of Haftar's MiG fighters was allegedly shot down by the Islamists and one of Haftar's air bases was taken. It's possible the Israeli jets were called in to stave off an even greater tactical defeat.

Middle East analysts and journalists (and I) have regularly reported on the intensification of the alliance between Israel and the Sunni powers (Saudi Arabia, Gulf States, Egypt, etc). This has included the Saudis' $1bn financing of Israel's Stuxnet malware and the assassination of Iranian nuclear scientists; Israel's opening of secret military liaison offices in Gulf states, secret meetings between intelligence chiefs of Israel and Saudi Arabia, and Israeli support for al-Nusra forces in Syria. Though this reporting has mostly focused on Sunni-Israeli intervention in Syria and the alliance's hostility toward Shia Iran, there has been scant reporting that Israel is offering its services to Libyan militias allied with Egypt.

Israel is enjoying its relatively recent bromance with the Sunni powers in the region and seeks to shower favours on those its new allies support, such as Haftar

Israel has numerous motives for aiding the Libyan strongman. First, his oil resources could benefit Israel, a resource-poor country always seeking to diversify its access to critical energy sources. Second, Israel has a natural affinity for Middle East strongmen with little or no religious or ideological commitments (Jordan’s Abdullah, Egypt’s Mubarak and al-Sisi). Israel wants neighbours it can co-opt by buying them outright or through mutual benefits like military and intelligence sharing. Third, Israel is enjoying its relatively recent bromance with the Sunni powers in the region and seeks to shower favours on those its new allies support (such as Haftar).

Recent news reports indicate that Russia too has become a Haftar ally and has dispatched military advisers to the country both in order to strengthen Haftar and prevent IS from gaining a toehold in the western Egyptian desert, as it has in the Sinai. It has also invested heavily in oil projects in Egypt and Libya. Haftar, a former Gaddafi ally, received his military training in the former Soviet Union and so has a deep connection with Russia.

Further, Israel is one of the top six arms dealers in the world. It seeks out nations, mostly in Africa, beset by civil war and internecine strife and sells arms to whichever side has the cash to pay. It also sends military advisers to these countries (usually retired generals and intelligence officers) to reap billions in consulting fees. Its most recent new client is the brutal South Sudan regime, news of which Israel attempted to censor. In this fashion, it spreads its influence in the developing world and creates alliances which will protect it from future Islamist threats (or so Israeli officials believe).

Libya is one of the few oil-producing countries which has markedly increased production in the past year. This may be due to Haftar's increasingly strong hold on Libya's oil fields, or it may indicate the billions he's reaped and expects to reap from these riches by selling to allies such as Israel and other countries not blessed by such resources.

In a separate development, Haftar this week rejected a deal negotiated between his domestic rivals and Italy which would allow Italian naval vessels to patrol in Libyan waters and intercept boats filled with refugees attempting to reach Europe.

This frustrates European efforts to halt the flow of immigrants which has brought as many as 600,000 from Libya alone to Europe. It also has the effect of facilitating the business of people-trafficking in the coastal areas under Haftar’s control.

- Richard Silverstein writes the Tikun Olam blog, devoted to exposing the excesses of the Israeli national security state. His work has appeared in Haaretz, the Forward, the Seattle Times and the Los Angeles Times. He contributed to the essay collection devoted to the 2006 Lebanon war, A Time to Speak Out (Verso) and has another essay in the upcoming collection Israel and Palestine: Alternative Perspectives on Statehood (Rowman & Littlefield).

Photo: Members of the Libyan National Army, loyal to Khalifa Haftar, flash the victory gesture from atop an armoured vehicle in the eastern city of Benghazi on 27 July, 2017 (AFP).