Hollande and the fall of the French Republic

Patrick Hilsman
Francois Hollande intends to deal the most significant blow to French democracy since Vichy. Before you call me alarmist look at the facts 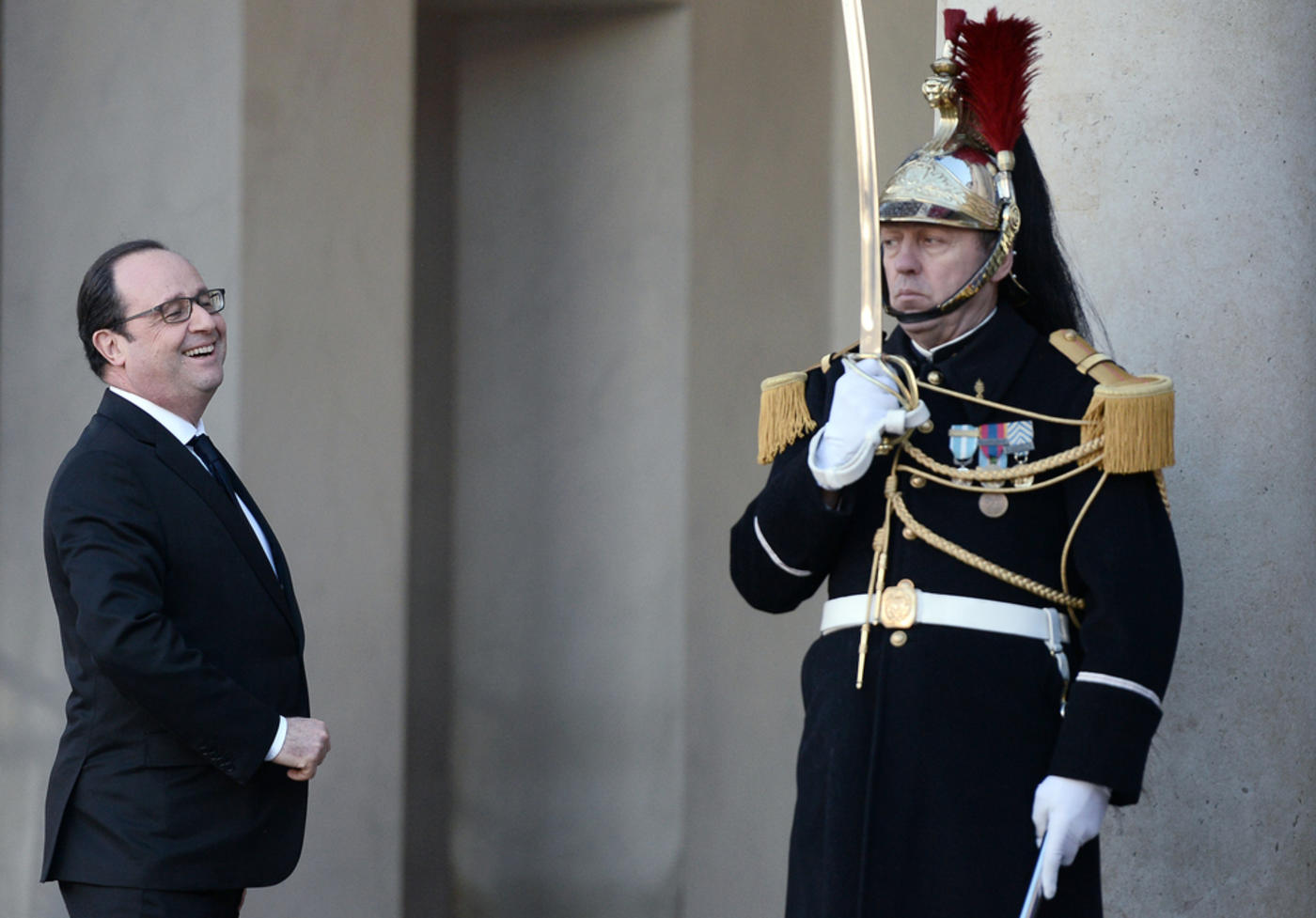 France is on a dark path. By the midpoint of his first term, President Francois Hollande had made himself the most unpopular president in French history. Economic policies that hurt business and the working class, erratic foreign policy and a series of sex scandals all made him look incompetent and out of touch.

Now in the wake of the terrorist attacks on Charlie Hebdo and the November attacks in Paris, he finds himself wielding extraordinary emergency powers by accident, yet he hasn't fixed any of his previous mistakes. Just before 13 November 2015, Hollande's popularity stood at 15 percent approval and 82 percent disapproval, according to Le Figaro newspaper. After the attacks his popularity jumped to a whopping 27-33 percent.

France is reeling and confused. Francois Hollande declared a state of emergency back in November which was just extended by the legislature for another three months.

This means the right to censor the press, ban public protest, search journalists homes and hold people under house arrest without warrant, a power which was blatantly abused to detain pacifist environmental activists during the Paris climate talks. By American standards this would amount to an unambiguous and total suspension of democracy.

While a state of emergency has been imposed many times in recent French history, the Hollande administration is taking the unprecedented step of trying to enshrine the new measures into the French constitution.

French Interior Minister Bernard Cazeneuve stated "it is terrorism that is the threat to freedom not the state of emergency." According to human rights experts and the highest body representing French lawyers his statement is backwards and delusional.

The French Human Rights League has pointed out that thousands of raids and hundreds of arrests have only yielded four prosecutions so far. The organisation has petitioned the French courts against what it refers to as a "serious and apparently illegal breach of several fundamental freedoms".

The National Council on Bars (The French bar association) has been completely unambiguous in their criticism of the state of emergency as "a judicial and social model which breaks with republican values".

UN special rapporteurs have raised alarms and issued the type of statement usually reserved for totalitarian regimes: "As France debates the strengthening of measures in the fight against terrorism, and considers a reform of the criminal justice procedure, we call on the authorities to revise the provisions and possible reforms adopted to that end, to ensure that they comply with international human rights law."

France being criticised for behaving like Russia and Turkey should be upsetting enough but the parallels to France's own history are most disturbing. Despite being executed as a traitor, a perfectly justifiable action in my view, Pierre Laval, the Vichy prime minister who collaborated with the Nazis, was not stripped of his nationality, nor was Marshal Petain or the thousands of French who fought for the Nazis on the Eastern Front.

Some were executed, thousands were imprisoned and none were stripped of their nationality. In fact, there is only one modern precedent for French citizens being stripped of citizenship: the Vichy government which helped perpetrate the Holocaust. French-born terrorists cannot be compared as humans to the thousands upon thousands of innocent Jews who were stripped of nationality and subsequently murdered with the full connivance of the French state. But this should not exist as a tool in anyone's arsenal if we are a democracy.

The debate over stripping terrorists of citizenship is disturbing enough on its face but even its strongest advocate, Prime Minister Manuel Valls, admits that it can't possibly have an impact on security. In reality it is a way to placate the extreme right which has been lobbying for decades to do away with one of the most sacred institutions of French democracy, "le droit du sol" or "the right of the land".

In other words, France has until now been steadfast that if you are born in France you are French. Now that the state is considering stripping citizenship from already dead attackers, that right is under assault, not from the extreme right but from Hollande's ostensibly liberal government.

Hollande is handing a massive symbolic victory to ISIS as well. The terrorist group has always said that Muslims born in France are not French and Hollande has taken France closer to being in lockstep with the ISIS view on nationality. Stripping traitors of French citizenship amounts to a de-facto recognition of the Islamic State. ISIS told the terrorists that they were citizens of the Caliphate not France. President Hollande intends to write the ISIS position into French law.

Christiane Taubira, who resigned her post as minister of justice on 27 January, is notorious for being relentlessly attacked by racists on the extreme right and flamboyantly putting them in their place. The outspoken minister made little secret of her distaste for the current government's position on the nationality of terrorists. During her tenure she repeatedly stated that the proposed measure was undemocratic and dumb on a practical level.

After resigning she tweeted "sometimes to resist is to leave". This statement could be interpreted as a reference to French history because of the important role played by resignations. Most notably, Charles de Gaulle resigned from the French emergency cabinet in 1940 to oppose the surrender to Nazi Germany. When de Gaulle then fled for England to form a government of resistance in exile, Churchill said of him: "He carried with him on his small airplane the honour of France." Today Christiane Taubira, a child of the French slave colonies, is the only former member of the cabinet carrying the honour of France.

Instead of granting more power to the leaders who failed to take the jihadist threat seriously, we should be holding them to account mercilessly. Francois Hollande entered the war against ISIS in 2014, before the Hebdo attacks, hoping that a purely symbolic support role for French aircraft wouldn't have any consequences. As we all know he was dead wrong. Now Hollande finds himself in the awkward position of having to re-declare a war that he declared over a year ago.

The extraordinary measures also whitewash the technical failures and incompetence of the French government as well as other intelligence services. When images of the terrorist ringleader Abdelhamid Abaaoud were shown on TV after the Paris attacks, I immediately recognised him from a video of French and Belgian jihadists that had aired on French television a year earlier.

You heard correctly: the face of the Paris attacker fighting with ISIS in Syria was broadcast on French television a year before the attacks. Short of putting up a billboard of himself on the Eiffel Tower with the words "I am ISIS" written underneath, it's hard to imagine a more obvious indicator that someone should be arrested.

Arrest warrants were issued for Abaaoud but either a lack of resources or a lack of attention to detail resulted in him slipping through the cracks. Abaaoud even bragged to ISIS-affiliated magazine Dabiq that he was able to slip into Belgium undetected. "A brother had taken video footage of some of us before a battle, but his camera got lost and was later sold by a murtad (apostate) to a western Journalist. I suddenly saw my picture all over the media but alhamdulillah the Kuffar (infidels) were blinded by Allah.

"I was even stopped by an officer who contemplated me so as to compare me to the picture but he let me go, as he did not see the resemblence! This was nothing but a gift from Allah!" Unless you believe Abaaoud's insistence that god blinded European security service it would seem that incompetence resulted in him going undetected.

Without any extraordinary measures or violations of democracy, Abaaoud could have been arrested the second he set foot back on European soil. Many of the attackers involved in the Hebdo and Hypercacher attacks were also known to the intelligence services so it is insincere to say the security services lacked the "tools" to interdict the plots.

Streamlining and modernising French intelligence agencies, as well as establishing a system to share intel more effectively with European partners, would be a far better use of time than changing the nationality of dead traitors. There should be absolute hell to pay for these intelligence failures but instead we are putting more power in the hands of the incompetent.

I am no Emile Zola but I think it's time for me to launch a few accusations anyway.

I accuse the French president of cowardice in the face of terror.

I accuse the French president of racism for making the issue of security into an issue of ethno-nationalist identity.

I accuse the French president of totalitarianism for stripping away the most precious rights of protest and free press.

Above all, I accuse the French President of hypocrisy for failing to keep us safe and blaming his failure on the foundations of French democracy.

ISIS can never conquer France, all they can do is kill people. ISIS strategy has always been to provoke division and authoritarianism in Western democracies. There is no plan B from their perspective.

Only our own governments can give them what they want and it seems that President Hollande intends to do exactly that. At least Francois Hollande and ISIS see eye to eye on this one thing. If we let Hollande go through with his schemes then ISIS has already won. Paris Attacks
A year after Charlie Hebdo, France is ever more divided and in denial
Myriam Francois