How Israel failed to silence BDS in Canada

Nada Elia
Why is the BDS movement viewed as such a threat that it now constitutes the new battlefront in Israel’s war on Palestinian rights? 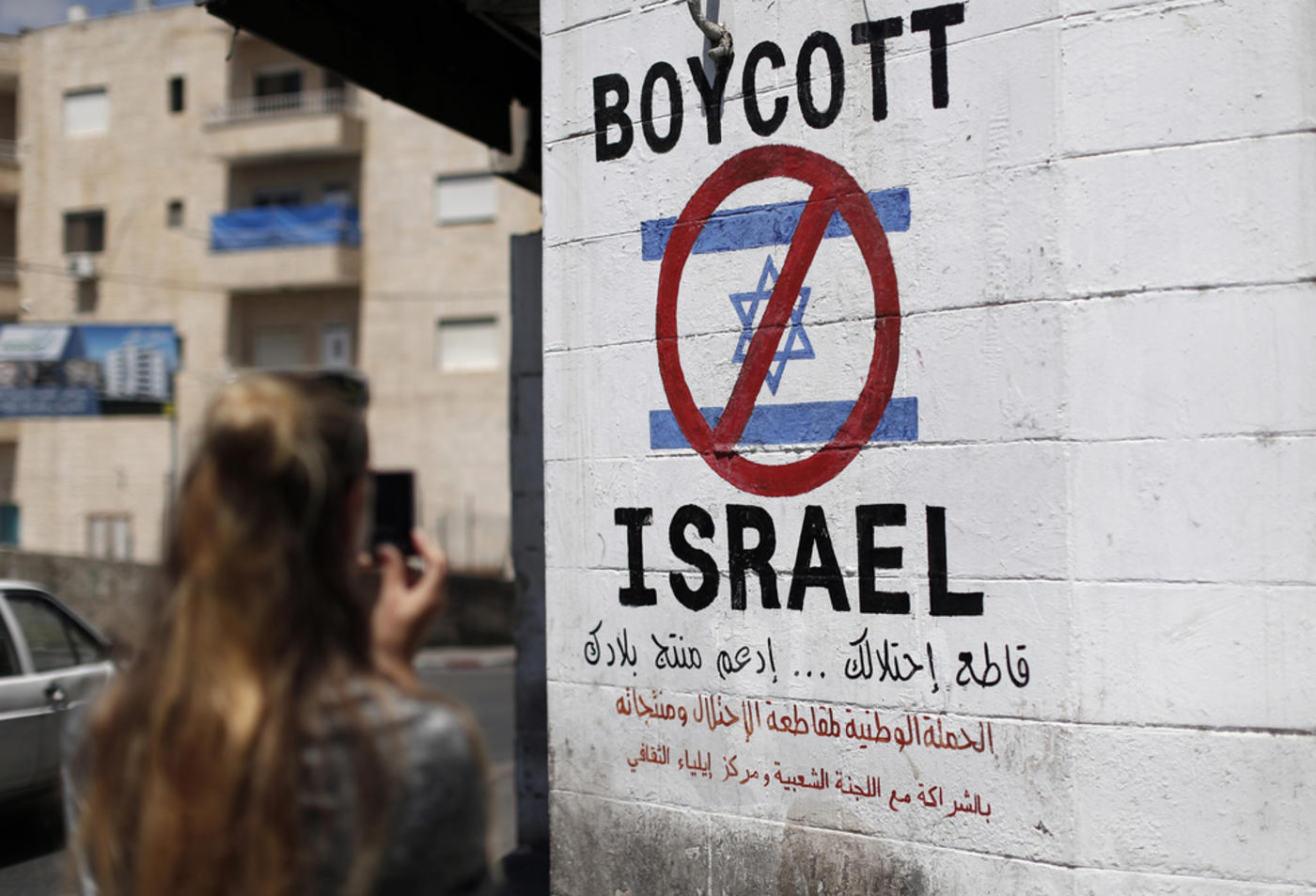 On 12 January, I was invited to speak, along with Noura Erakat, at the University of Toronto. We are both Palestinian scholar-activists with a long-standing commitment to non-violent resistance and BDS organising.

BDS is the Palestinian call for global solidarity in the form of Boycott, Divestment, and Sanctions on Israel until it abides by international law and end its illegal occupation, dismantle the illegal apartheid wall, treats all its citizens equally, and stops violating Palestinian refugees’ internationally recognised legal right of return.

Clearly alarmed at the prospect of having two seasoned speakers discuss ways to help end Israel’s violations of international law, the Jewish Defence League (JDL), which last year shut down a similar event organised by the same students, was hoping to disrupt, and ultimately lead to the cancellation of our panel. The JDL created a Facebook page inviting people to voice their opposition to what they claimed would be “calls for the murder of Jews".

Why is the Jewish Defence League so afraid of two Palestinian scholars that they try to shut us down or drown us out, rather than listen to what we have to present? Why do Zionists and Israel's apologists disrupt lectures on BDS, a non-violent strategy, and not “peace talks” or “the peace process?”

As Erakat noted in her own speech, BDS is not even a radical movement, as it seeks only the implementation of international law. Why then is BDS viewed as such a threat that it now constitutes the new battlefront in Israel’s war on Palestinian rights?

Simply put, BDS is about achieving justice. Justice is a threat to injustice. But BDS is also an effective strategy for liberation, while the peace process only secures more gains for Israel and more losses for the Palestinians. After all, peace talks and the “peace process” are what gave us the Oslo Accords, with their devastating consequences, the further erosion of Palestinian sovereignty, the ever-expanding illegal settlements, and the clampdown on civil rights and free speech.

Having learned from last year’s confrontation with the JDL, which the university administration had mismanaged by cancelling the event rather than adequately addressing the disrupters, the student organisers had a solid “Plan B” figured out. It was good foresight. Members of the JDL did show up, including the director of JDL Canada, Meir Weinstein. A standoff was in the making. The lines were drawn quite clearly: if the JDL managed to create such a disruption that campus security decided to close us down again, they would have won.

Erakat elaborated on the hardships of daily life for Palestinians in their own homeland, telling of the extra-judicial executions of Palestinians, the home demolitions, the loss of residency rights, and more. We had been told that each speaker would be given 20 minutes; Erakat spoke for close to 45 minutes before signing off.

When I started speaking, I indicated to the Israel apologists in the room that I was aware of their call to disrupt our panel, explaining that if they were in the audience to drown out any “calls to murder Jews” they were wasting their time, but that I welcomed the opportunity to discuss the liberation of Palestine with anyone in the audience.

They yelled vile and often incoherent accusations - “This is Anti-Semitic,” “How many Jews do you want to kill?” and “You love dead Jewish babies". I was reminded, and reminded the audience of Professor Saree Makdisi’s astute observation: “Having lost the actual arguments, Israel's defenders have now declared war on argument itself.”

The disrupters hissed as I spoke. I asked them to leave their questions to the end, at which time I’d look forward to engaging in a productive conversation rather than a shouting match. But they would not quiet down.

At that point, campus security should have removed them. They did not. Instead, we had to move the whole event to another building. It was late, yet close to 150 audience members trekked in the bitter cold to another building where two rooms were filled to capacity, necessitating that I be Skyped into the overflow room so everyone could hear me.

What took place at the event paralleled, on a much more sanitised level, the tension in Palestine between illegal occupiers and the indigenous population.

Students are the rightful population at the University of Toronto and campus security is supposed to protect them. The JDL members are outsiders and they were informed of the university policy - three strikes and you’re out, a “strike” being an attempt at disrupting one of the speakers. They refused to respect it and they refused to leave the auditorium upon the request of the moderator after they had received three strikes.

Campus security did not escort them out, declaring instead that the final decision as to whether to remove disrupters or not was at their own discretion and they chose not to avail themselves of this measure. Instead, the students were displaced as our “Plan B” was to relocate the event to another auditorium, if the disrupters would not leave.

At that new location, the hecklers would not be allowed in. Campus security cooperated to ensure that much.

While our event was temporarily disrupted that evening, the inconvenience was nothing compared with the oppression of Palestinians in their own homeland. Many in the audience commented on how the tension, the rudeness and arrogance and refusal to abide by official guidelines reminded them of Zionist encroachment on everyday life in Palestine.

We also looked at Palestinian "Sumoud", or steadfast perseverance as a model for our own tenacity, and put up with the hostility, the waste of time, the displacement and the illegal “occupation” of a space we had reserved for our event, as we strategised for solidarity with a liberation struggle.

Interestingly, the JDL event page has the JDL claiming that they successfully shut down the event. That claim is clearly delusional:  both speakers spoke at length and we have ample footage to document that.

Moreover, the audience left the rooms with an increased awareness of the irrational behaviour of Israel apologists and their resort to utterly baseless and ultimately futile accusations and attempts at character assassination.

As it presents the situation in Palestine/Israel in terms of settler-colonialism, apartheid, and decolonial struggle, rather than an “age-old conflict," BDS is shattering the Zionist narrative of Israel as a morally redemptive democracy. The student organisers understand this and they know that the Zionists seek to censor the truth.

The success of this event, then, is dual: the speakers shared their knowledge and analysis; most importantly, the community felt empowered by the realisation that the JDL cannot silence criticism of Israel at the University of Toronto with its proud history of solidarity with the Palestinian people.

Photo: A tourist photographs a sign painted on a wall in the Palestinian town of Bethlehem in the Israeli-occupied West Bank on 5 June, 2015, calling to boycott Israeli products coming from Jewish settlements (AFP). 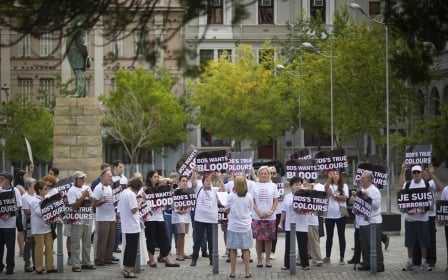 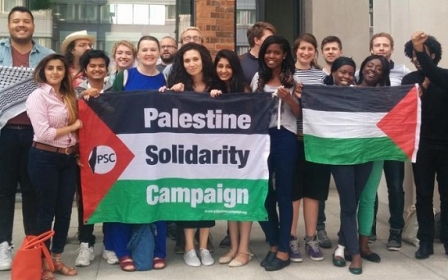 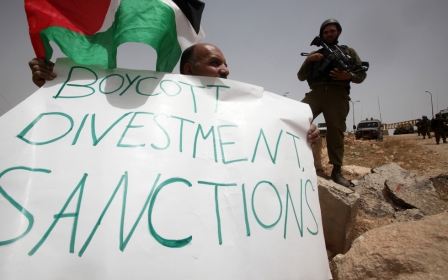