How Saudi tried to use the Kurds to clip Iran's wings 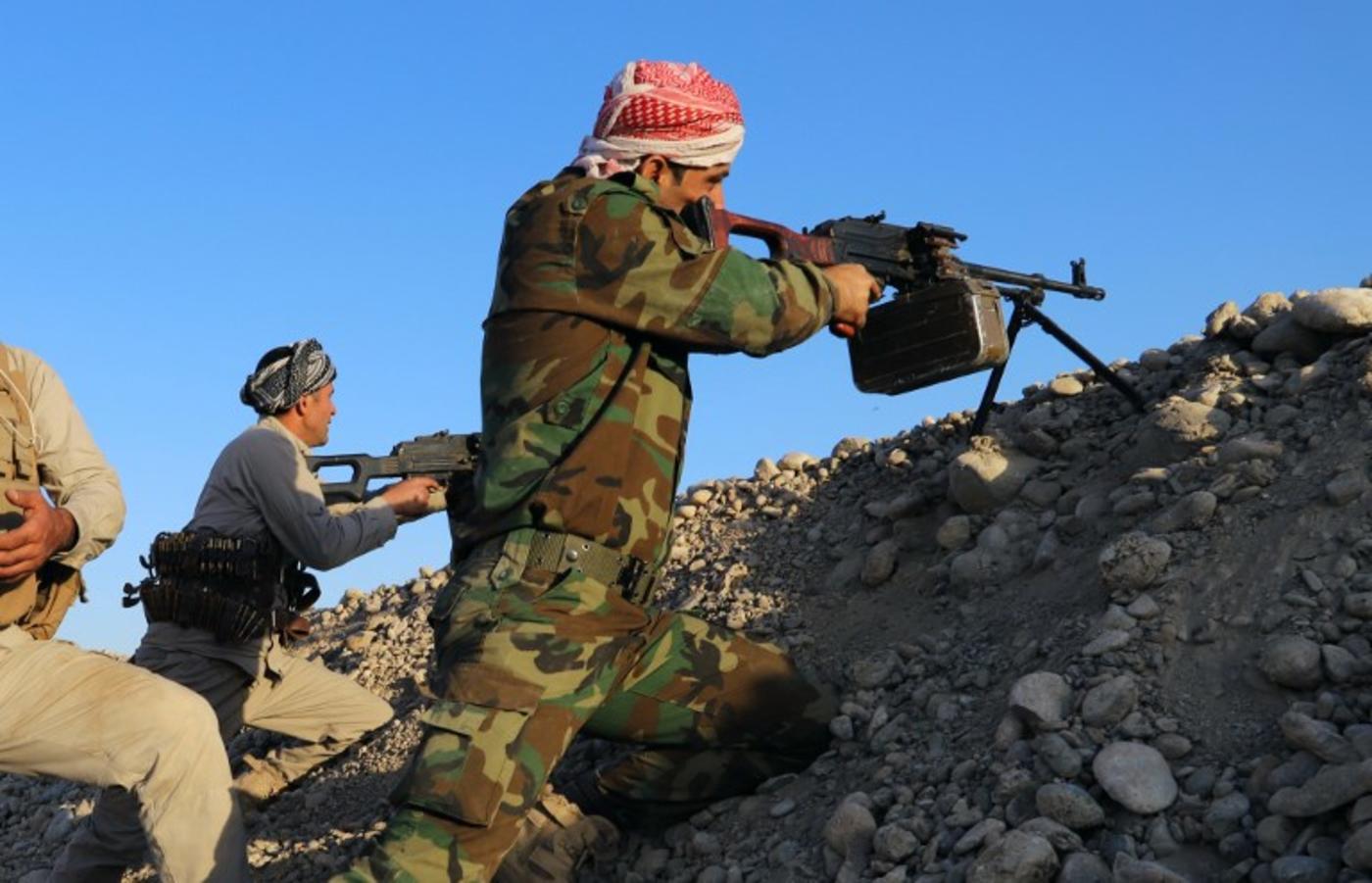 From the moment Massoud Barzani, president of the Iraqi Kurdistan Region, called his referendum, it was obvious which group of countries would form a coalition to nip an independent Kurdistan in the bud.

With 30 million ethnic Kurds living in a region spanning four countries, Turkey, Iran and Iraq shared a vested interest in stifling the nascent state at birth, even though for Ankara it meant abandoning the one Kurdish ally it depended on in its war against the Kurdistan Workers' Party (PKK) at home and the Kurdish Democratic Union Party (PYD) in Syria.

It was, however, less clear which group of states gave the proverbial nod and wink to Barzani. Israel was the only player in the region to do do so overtly. Israel "supports the legitimate efforts of the Kurdish people to achieve their own state," Prime Minister Benjamin Netanyahu said.

Although Israel did consider the PKK a terrorist group, Yair Golan, a former deputy chief of the Israeli army, told a conference in Washington that he personally did not. "When you look at Iran in the east, when you look at the instability in the region, a stable and unified Kurdish entity in the middle of this swamp is not a bad idea."

Golan's reasoning was not entirely alien to another regional power with an interest in using the Kurds to the clip the wings of Turkey, Iran and Iraq: Saudi Arabia.

For public consumption, King Salman stood four square behind the unity of Iraq. Behind the scenes the Royal Court despatched a series of emissaries to encourage Barzani in his project to split the Iraqi state and question the territorial integrity of Turkey and Iran.

One of these was a retired major general in the Saudi armed forces, Anwar Eshki, who is now chairman of the Middle East Centre for Strategic and Legal Studies, a think-tank in Jeddah.

Eshki was explicit about the kingdom's reasoning. He told the Council for Foreign Relations that working for the creation of a Greater Kurdistan through peaceful means would "reduce Iranian, Turkish and Iraqi ambitions. This will carve away one third of the territory of each country in favour of Kurdistan."

Eshki repeated his support for an independent Kurdish state in a telephone interview recently with the Russian state-controlled Sputnik news agency.

He said the kingdom did not stand in the way of the people's will. I believe that "the Kurds have the right to have a state of their own".

"Iraq has gone far in marginalising the Kurds. And as al-Barzani said, it has not adhered to the constitution when it divided Iraq into races and sects. Should the Iraqi government proceed along the same path, it could end up dividing Iraq into more than just two."

Another signal was sent in March this year by an adviser to the Saudi Royal Court. Dr Abdullah al-Rabiah told the Saudi Okaz Daily that Iraqi Kurdistan had a high economic, cultural, political and military potential, which was impossible for Iran and Turkey to undermine.

Speaking after meeting Barzani, Rabiah said Kurdistan had the "necessary grounds for independence and defending its existence".

Another key member of the Saudi alliance, the United Arab Emirates, did the same.

I am told by a reliable source that Barzani's son, Masrour, the head of the National Security Council, made a secret visit to Abu Dhabi just one month before the 25 September referendum.

Abdullah Abd al-Khaliq published a map depicting the State of Kurdistan that would be established within years and would have a population that may amount to 30 million. He also called on Turkish President Recep Tayyip Erdogan not to penalise Kurdistan because of the referendum, which he said was "a democratic measure".

This did not go unnoticed in Baghdad. The New Arab quoted an Iraqi official alleging that Erbil had signed a "memorandum of understanding" with Ibtisam al-Kutbi, head of the UAE Centre of Policies, to help organise the referendum. The UAE denied reports that its consul in Erbil attended the referendum and visited some polling centres.

Saudi Arabia sent out other signals that its policy in the region was changing. A secret visit by the Saudi minister for Gulf affairs, Thamer al-Sabhan, to Raqqa in Syria raised eyebrows. According to al-Quds al-Arabi, al-Sabhan was photographed with Brett McGurk, US special envoy to the anti-Islamic State campaign, accompanied by military commanders with the US-backed Syrian Democratic Forces, the same guys who had erected a portrait of Abdullah Ocalan, the leader of the PKK, in the ruins of the city newly liberated from the IS.

This apparently was a message aimed at Turkey.

Once Kurdish Peshmerga resistance in Kirkuk crumbled, Riyadh quickly jumped ship again. Salman called Haider al-Abadi, the prime minister of Iraq, to stress the kingdom's support for Iraq's unity and invited him to visit Riyadh next week. The chief of staff of the Iraqi army visited the kingdom this week.

The Kirkuk fiasco is the latest example of the instability inherent at the crumbling heart of the US empire in the Middle East. Turkey, the KRG, Iraq and Saudi Arabia are all allies in which the US has invested heavily.

Little of this has any relevance, any more, to the way these nominal US military allies regard each other, which is more reminiscent of the way statelets or principalities behaved in 18th century Europe than anything we have witnessed in the past century.

US-trained and financed units of the Iraqi army worked hand in hand with Iranian backed Shia militias to oust US-equipped Kurdish Peshmerga forces, who were essential tools in the fight against IS in northern Iraq.

The ethnic cleansing around Kirkuk over the past week was real enough. About 100,000 Kurds have had to flee their homes, many have had their businesses torched and scores of Peshmerga fighters have been killed.

During all this, Washington stood on the sidelines. A State Department spokesman said: "The reassertion of federal authority over disputed areas in no way changes their status – they remain disputed until their status is resolved in accordance with the Iraqi constitution."

The shredding of the US military umbrella

In effect, the fighting over Kirkuk is the first major breach of the pact in post-Saddam Iraq that Baghdad would not use military force against the Kurds. The Iraqi Prime Minister Abadi has had his authority enhanced. The recapture of Kirkuk helps Abadi fight his rival, the former prime minister Nouri al-Maliki, in next year's national elections, and what the Iraqi constitution does or does not say counts for little in all this.

So to be a US ally is to have no guarantee of an American diplomatic, let alone military, umbrella.

The vacuum left by America's retreat (and I view Donald Trump's America First nationalism as a continuation of Barack Obama's wind down of the Bush-era interventions) is even more destabilising than a president who has turned the White House into a reality TV show.

Whatever support he was calculating internally from Peshmerga loyal to the Patriotic Union of Kurdistan (PUK), which he did not get, Barzani also picked up the wrong signals from Riyadh and Abu Dhabi.

The US leaves in its wake a vast area of contested space, patrolled by freewheeling, battle-hardened armies tooled up with western arms

Welcome then to a post-Western world. Both Britain and Russia went through the painful process of losing their empires. Now its Washington's turn.

Retreating America does not leave in its wake a new balance of power policed by strong regional actors. It leaves a vast area of contested space, patrolled by freewheeling, battle-hardened armies tooled up with western arms. Long standing allies are dumped and policies disintegrate overnight.

There are of course winners. One of them is Iran.

In the absence of a strong and reliable international mediator, Qassim Suleimani, the Islamic Revolutionary Guard Corps (IRCG) Quds Force leader appears to have played a far more effective role in convincing the Talabani family wing of the PUK to broker a deal with arriving Hashd al-Shaabi forces, although the Shia militia quickly withdrew its forces, leaving the Iraqi army and the federal police in control.

Only two days after having its nuclear deal "decertified" by Donald Trump, Iran through its Shia proxies has effectively gained control of another strategic chunk of Iraqi real estate and a number of its oil wells.

Turkey has been pushed even further into the arms of Tehran. Turkey's token force in Iraq is now surrounded on all sides by the Hashd al-Shaabi, the Iranian-backed Shia militias which were used to spearhead the assault on Kirkuk.

Saudi Arabia is weaker regionally than ever before. Will it see sense and learn each time it plays Game of Thrones and loses? The legacy of these contests is a growing list of ruined Sunni cities and millions of refugees. Ruins and refugees are the result of Saudi's so-called leadership of the Sunni Arab world.

Photo: Peshmerga fighters take aim from their position at the Altun Kubri checkpoint, 40kms from Kirkuk, on October 20, 2017. Iraqi forces clashed with Kurdish fighters as the central government said it wrestled back control of the last area of disputed Kirkuk province (AFP)