Kamel Hawwash
In recent months, the task of obtaining an appointment with the Population and Immigration Authority has become an ordeal, in Israel’s latest attempt at the 'soft expulsion' of Palestinians

The mere mention of the Israeli Population and Immigration Authority in the East Jerusalem neighbourhood of Wadi al-Joz  provokes howls of outrage in any Palestinian. Ask about their experience and you will be inundated with stories of obstruction, humiliation and oppression.

Long queues form simply to obtain an appointment, and lines snake outside the building in the cold or under the summer sun, as police hurl insults

The office deals with civil matters, including the issue and renewal of Jerusalem residency cards, Israeli travel documents, birth and death certificates, applications for family reunification and applications for Israeli citizenship. The office also deals with employment-related matters.

Every single Palestinian with a Jerusalem ID card (around 300,000) has reasons to deal with the office, usually in person. They are not permitted to attend other offices, such as in West Jerusalem. Long queues form simply to obtain an appointment, and lines snake outside the building in the cold or under the summer sun, as police hurl insults.

Palestinians have been angered by reports of the same appointment time being given to multiple applicants, resulting in unnecessary queuing. Where the facility to book an appointment online exists, Palestinians say the system regularly crashes, or the appointments disappear soon after being made available.

Applications for an appointment can result in a date six months in the future, making it extremely difficult to make quick travel plans requiring an Israeli document for travel from Tel Aviv airport. A substantial delay in the replacement of a lost Jerusalem ID card can also have a severe impact on daily life, as the ID card is proof of eligibility to return to Jerusalem from the occupied West Bank via multiple Israeli checkpoints.

The fact that Jerusalemites are subjected to oppression and humiliation is not new, and the worsening conditions ... can only be interpreted as a deliberate policy to humiliate them, making their lives so difficult that they will choose to leave their city

The overcrowding, body searches, long waits and mistreatment by the police and security guards have led to the appointment queue being labelled the “humiliation queue” by Palestinians. The crisis has been reported in the Israeli media but also via a Facebook page where Jerusalemites post their daily experiences and request guidance on how to expedite the processing of their various applications.

Reports in the group indicate that while renewal of Israeli travel documents used to be possible at various post offices, this changed six months ago, requiring attendance at the East Jerusalem Population and Immigration Authority office.

The page contains many stories of daily suffering. A Palestinian woman in the queue interviewed by Almayadeen TV said that she had waited five months for her appointment to apply for an ID card for her son.

A lawyer for Israeli human rights organisation Hamoked, Abir Joubran-Dakwar, noted that “the response of the government is that there is no solution on the horizon, as they need to find alternative buildings, which will take years”.

Activist Ismail al-Maslamani put the problem down to “a clear Israeli policy for soft expulsion or the emptying of Jerusalem of its Palestinian residents”.

Others say this crisis stems from Israel wanting to collectively punish Palestinian residents of Jerusalem for their steadfastness and their recent uprising to protect al-Aqsa Mosque.

The contrast with the West Jerusalem Office, which only serves Israeli Jews, could not be starker, with no queues or any form of humiliation. East Jerusalem Palestinian citizens of Israel are barred from using this office, in a clear case of discrimination.

Israel does not allow the Palestinian Authority to have any presence in East Jerusalem, leaving it to Palestinian members of the Knesset and human rights organisations to take up the matter with the Israeli government.

Recently, MK Ahmad Tibi pushed to hold an urgent session of the interior committee to discuss the issue, resulting in plans for the committee to make a field visit.

Meanwhile, on 15 March, a petition was brought by Hamoked to the Israeli High Court, asking it “to instruct the East Jerusalem office of the Ministry of Interior Population and Immigration Authority and the Employment Service to improve conditions and make their services properly accessible to residents of East Jerusalem”.

Lawyer Joubran-Dakwar said: "It is unacceptable that obtaining basic services becomes an ordeal fraught with humiliation. All of the hardships and obstacles prevent residents from realising their rights."

The question of political participation

In its response to the petition, the state acknowledged “significant crowding in the wait for the security check” and “difficulty in making an appointment at the Population Authority, and delay in receiving services as a result of this difficulty”.

After the court hearing, Joubran-Dakwar told those awaiting results that the court had instructed those responsible to find short- and long-term solutions - such as allowing East Jerusalem residents to access other offices in West Jerusalem and elsewhere - and to report on their plans in 60 days. "The solution must lead to anyone requiring services from either department to receive speedy processing with dignity," Joubran-Dakwar said.

One way for Palestinians to raise their concerns to those who impose taxes on them without allowing them to influence how the money is spent, is to participate in municipal elections, which they have largely boycotted for fear of legitimising the occupation.

Activist Ramadan Dabash, who has formed a party called Jerusalem for Jerusalemites, has stated: “I think people are ripe to vote. Some people object, saying this is Israelisation and normalisation, but I tell them this is everyone’s municipality and everyone’s country. I’m not telling them to give up al-Aqsa or convert to Judaism or renounce Palestinian nationalism, but we must have our place in city hall.”

Dabash is not a popular figure among Palestinians. In Muftah, Oscar Jarzmik cautioned against Palestinian participation in the elections, referring to the participation of Palestinian citizens of Israel in the Knesset: “Their effectiveness is, however, limited by laws that protect the dominant ideology of the state (Zionism) and ensure Palestinian subordination to political goals defined by the majority.”

In his conclusion, Jarzmik noted: “In short, running candidates in municipal elections may score a symbolic challenge to Zionist claims to Jerusalem and yield minor improvements in terms of services. But in the end, the system itself is designed to marginalise, not empower, Palestinians.”

I agree with his conclusion. The fact that Jerusalemites are subjected to oppression and humiliation is not new, and the worsening conditions - possibly a result of US President Donald Trump emboldening Israel - can only be interpreted as a deliberate policy to humiliate them, making their lives so difficult that they will choose to leave their city.

How does this encourage coexistence and peace?

Photo: In recent months, the task of obtaining an appointment from the Israeli Population and Immigration Authority in the East Jerusalem has become torturous, including multiple appointment times (Facebook) 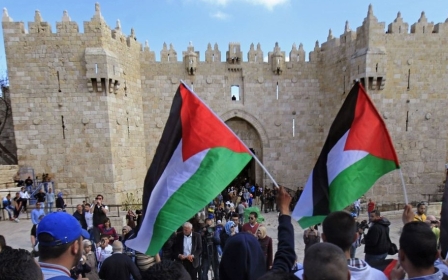