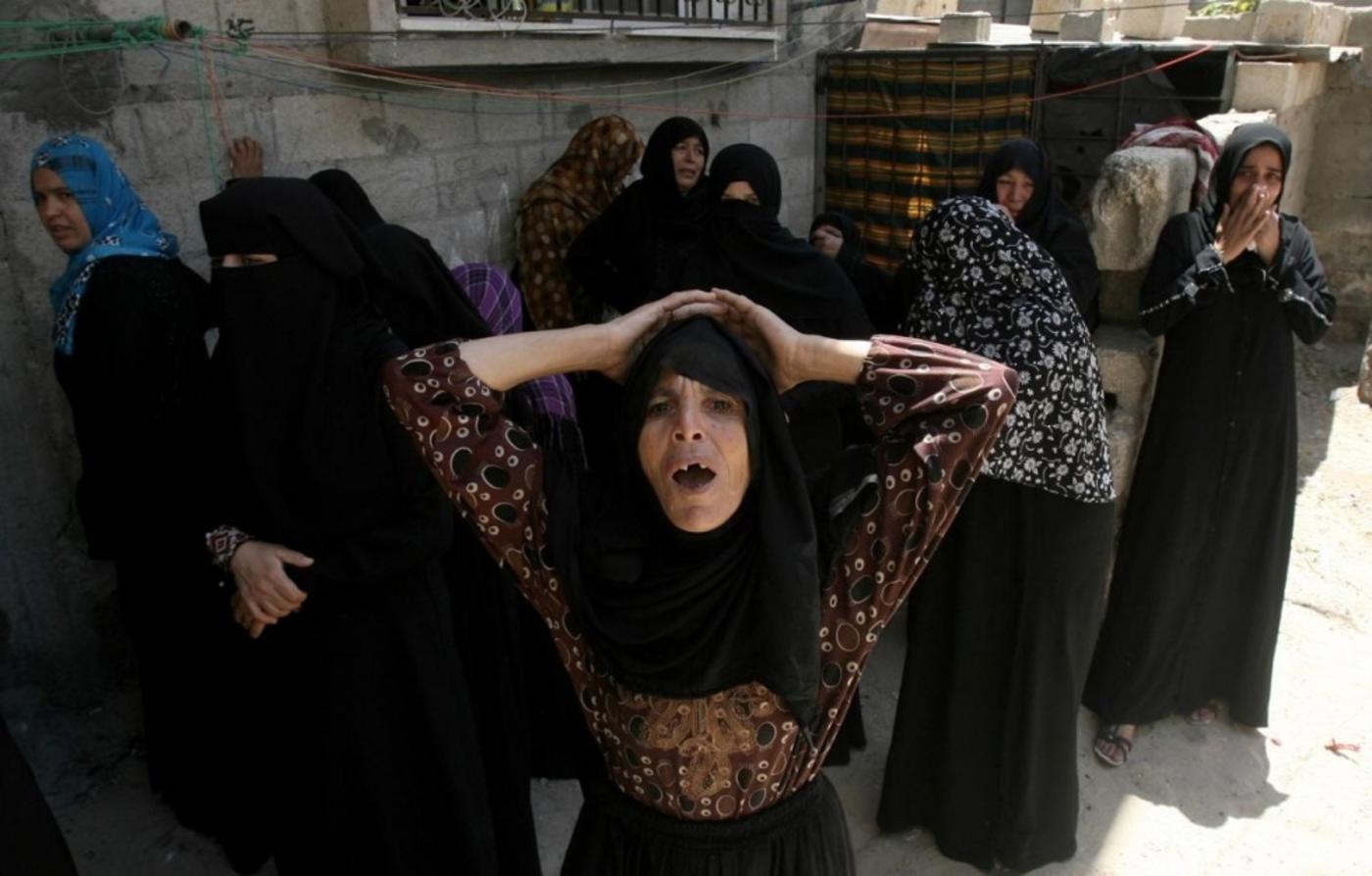 Summer Rains, Autumn Clouds, Hot Winter, Cast Lead, Returning Echo, Pillar of Defence and now Protective Edge. The names of Israel's assaults on Gaza are a fantasy, an exercise in make believe. They buy Israel neither peace nor deterrence.

They are however extremely effective. They are effective at raising yet another generation of Palestinians committed to Israel's destruction. In this particular case, and at this particular time, nothing but a full scale assault on Gaza could more effectively kill off the idea in the Palestinian mind - regardless of where it resides - that Israelis are prepared to live alongside them peacefully in a separate state.

This is the solution to which liberal Zionists are wedded, because it is the only one which guarantees the survival of a Jewish majority within its 1948 borders. And yet it is precisely this fading solution that Israel's military might is now proceeding to bury in the rubble of its bombardments. A better name for the current offensive would be Operation Stone Age. The stones referred to are those of another intifada.

Khaled Meshaal, Hamas' leader should be listened to when he said on Wednesday that it will not be long before you will not be able to find a Palestinian who dares talk about a state based on the 67 borders. I am guessing, because I have not asked him, but the writer of the following blog which appeared on Tuesday, would probably agree.

"However, the rapid deterioration we're experiencing in the security situation did not come because of the vile murder of Naftali, Eyal and Gil-Ad, may their memories be blessed.

The author is Yuval Diskin, Shin Bet's director between 2005-2011 and that passage comes from his Facebook page.

Diskin is right. This operation is not a response to the murder of three Israeli teenagers. The plan to attack, or at least the temptation to attack, Hamas in the West Bank and then in Gaza had been building for months for a whole number of reasons: Israel's inability to accept the Palestinian Unity government; the assumption that with the change of regime in Egypt, and loss of money from Iran, Hamas in Gaza was more vulnerable to attack; the US foreclosure of the option of attacking Iran, which has promoted Hamas back into the Premier League of Israel's existential enemies.

Diskin's former colleagues in Shin Bet say Hamas is responsible for the abduction and murder of the youths. They could be right in one sense: Meshaal's decision to form a unity government was controversial within Hamas. A meeting in Doha prior to the announcement saw fierce disagreement particularly from Hamas members in the West Bank, who know that Abbas' continued security cooperation with Israel meant a continued crackdown on them.

Meshaal was attacked within Hamas for giving too much ground to Abbas. A kidnap and murder of three young Israeli settlers in the West Bank could have been conducted by Hamas affiliates in Hebron for the express reason of torpedoing a policy they never had agreed to in the first place. Another motivation for the kidnap could have been an attempt to force a prisoner release which Netanyahu stopped as the talks with Abbas collapsed.

But the idea that Meshaal in Doha or anyone in Gaza would have dreamed this operation up flies in the face of all logic - and say what you will about Hamas, they are logical. Those who planned these abductions wanted to destroy the unity government. That could include a rival Palestinian faction, or Israel, but it could not include Meshaal himself, or Hamas in Gaza who have done everything in word and deed to keep the deal going, and still have not resiled from it to this day.

Israel did not need evidence. It needed a publicly plausible excuse to implement a pre-arranged plan. Thus it was with the invasion of Lebanon in 1982. On 3 June that year Shlomo Argov, the Israeli ambassador to Britain was hit by a burst of submachine gun fire as he left the Dorchester hotel, an attack he survived. Three members of the hit squad were arrested and charged with the crime. They were from Abu Nidal's Fatah Revolutionary Council, but it was the PLO in Beirut who copped it. The same scenario is happening now.

So the question arises: what does Netanyahu hope to achieve? Speaking purely from Israel's own pragmatic interests, there are many elements in the current situation which could make Israel's long-term security worse.

The Palestinian eruption to the racist murder of Mohamed Abu Khdeir took place not in the West Bank or Gaza, but within the borders of Israel itself - in Jerusalem, Nazareth and the northern triangle. Where would you least expect a third intifada to start? In a middle class area of east Jerusalem called Shuafat. Connected to the centre of the city by the new Light Train, this was supposed to be the model of integration, yet it was here that the protest was at its strongest.

These are Israeli citizens. More importantly, they are Jerusalem residents and they live on the Israeli side of the separation wall.

But the Israeli reaction to the two sets of killings said it all. If Jews are killed, the homes of their suspected Arab killers are blown up before they are arrested, let alone charged. But if an Arab is killed, their Jewish killers get the benefit of due judicial process. All victims are citizens of the same state. There is just a world of difference in how their deaths are treated.

The Palestinian reaction to Israel's military offensive is undoing years and millions of dollars of Israeli work. It is reuniting Palestinians in the West Bank, Israel and Gaza, which Israel has been trying to divide and contain in cantons.

The statements of Meshaal and Mahmoud Abbas both reflect this. For the first time, Hamas put at the top of its conditions for a ceasefire, a demand for Israel to halt all operations in the West Bank and Jerusalem. Previously Hamas had put Gaza first. Not now.

The last truce agreement between Hamas and Israel did not include the West Bank, and Israel's incursions into the West Bank were not seen as an excuse by Hamas to claim that the truce was breaking down. This time however it is the other way round. Israel is using what happened in the West Bank to attack Gaza and it is making a fatal mistake, because it is reuniting two sides it has made great efforts to keep apart.

Regionally, it is making an even bigger miscalculation. Israel is no longer surrounded by buffer states, friendly or hostile, which secure its borders. Syria no longer performs that function and nor indeed does Sisi's Egypt, which is facing a full blown jihadist insurgency in Sinai.

The counter-revolutions and civil wars sparked by the Arab Spring have brought chaos to the region in which groups like the Islamic State thrive. They are no respecter of borders as Jordan, Saudi Arabia, Libya and Egypt are finding out. By bringing the Palestinian cause once again to the forefront of the Middle eastern stage, Israel is attracting the worst kind of interest from the most extreme elements of radical Islam - especially if it succeeds in crushing Hamas.

Militarily superior and the instigator of most of what happens in its immediate neighbourhood, Israel still has the power to make peace with millions of Palestinians amongst whom it has to live in war or peace. It can still make territorial concessions from a position of strength. The emphasis here is on the word "still." In a few years time, it may not be able to do so.

Photo Credit: Women in Gaza mourn after a rocket attack on Wednesday (AA) Gaza Under Attack
Young Gazans tell of a familiar fear