Meron Rapoport
Profiting from Netanyahu's weakness, the right-wing Jewish Home party gets key posts in his new government. The Palestinians may soon feel the difference 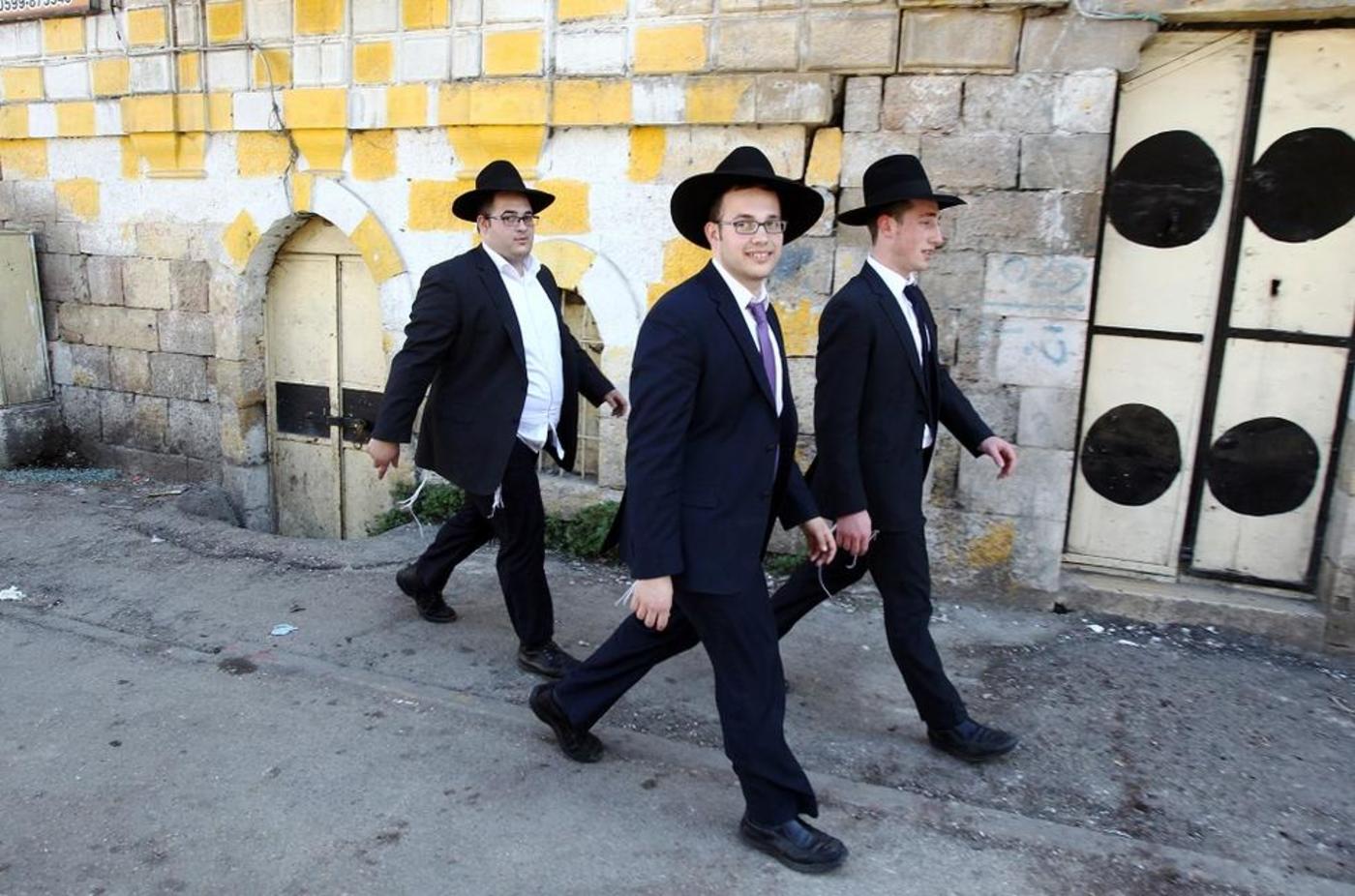 When elections were announced in Israel six months ago, many predicted that the Jewish Home party, led by Naftaly Bennet, would be the biggest winner. Opinion polls forecast it would win 20 seats against the 12 it had in the previous legislation, and party leaders did not hide their hopes that it would be the largest right-wing party, pushing Benyamin Netanyahu's Likud into second place.

When the votes were counted, however, Bennet’s group won only eight seats against 30 for Netanyahu.

Despite what was a clear setback, Bennet turned it into victory after hard bargaining with Prime Minister Netanyahu. He was nominated to be education minister; his most loyal follower in the party, Ayelet Shaked, was given the influential and prestigious justice ministry; and Uri Ariel took the agriculture ministry, with a strong influence on land policy, always a sensitive issue in Israel.

The nomination of Bennet - who has been quoted as saying that "I have killed many Arabs in my life and I have no problem with that" - to head the education ministry, with its huge budgets and its 400,000 Arab students, did not raise many eyebrows.

That may be because the National-Religious party, the "mother's party" of Bennet's Jewish Home, held this ministry for many years, and perhaps because the minister, whatever his opinions may be, has little influence on the curriculum in Israeli schools.

Much more attention was given to Shaked's nomination to the justice ministry. Shaked stands at the very right end of this already extreme right-wing party.

During Operation Defensive Edge, the military operation against Gaza last July, for example, she published a post on her Facebook page in which she endorsed an article written 12 years before, calling for Israelis to consider all the Palestinian people, "with its elders and women, cities and villages" as an enemy. In time of war, they all deserve death and "nothing is more justified," said the text, which Shaked labelled as "being [as] relevant today as [it was] before".

Shaked was one of the architects of a concentrated attack on Israel's legal system for allegedly being too liberal and for not representing the "will of the people". She demanded a curb on the powers given to the High Court to disqualify laws passed by the Knesset for being "unconstitutional" and has sought to strengthen the influence of politicians on the nomination of judges.

As a parliamentarian, Shaked was one of the promoters of the "NGO's Law", aimed against "anti-Israeli" organisations such as B'Tselem (The Israeli Information Centre for Human Rights in the Occupied Territories) or Breaking The Silence, which publishes Israeli soldiers’ accounts of their actions in the occupied territories. She is also a strong supporter of the “Nation Law”, which seeks to put the "Jewishness" of the state as a parameter for any legislation in Israel.

It is easy to understand, therefore, why her nomination raised much apprehension among liberal circles in Israel. As justice minister, she will be able promote or block any legislation process, and if she stays long enough in office she will influence, if not dictate, who will be the next attorney general or the new judges in the High Court. Giving such powers to a politician with a clear nationalistic and anti-liberal agenda is a legitimate cause for worry.

It doesn't end with Shaked's nomination. According to the agreement with Jewish Home, new Agriculture Minister Uri Ariel will also be responsible for the Settlement Division, formally a non-government organisation that leases land to settle in the West Bank. Michael Sfard, a leading human right lawyer, describes this organ as the "militia" used by the Israeli government to perform actions it doesn't want or cannot perform in the West Bank settlements.

The Settlement Division belongs to the World Zionist Organisation, and therefore is not subject to any parliamentary or other Israeli governmental control. At the same time, it acts as a channel to transfer huge sums of money to support the settlements in the occupied territories. In 2013, for example, the Settlement Department got 650mn shekels ($160mn), of which at least half was spent in the West Bank.

Over the past several years, efforts have been made to bring the Settlement Division under control. Even the Attorney General ruled that its status as free of public scrutiny cannot be maintained.

Giving Ariel, himself a settler who represents a right-wing opposition to Bennet within the party, overall responsibility for this organisation will probably doom such efforts to failure and enable the government to continue investing in the West Bank without outside interference.

As if that is not enough, Ariel, as agriculture minister, will also be  in charge of the Authority for Bedouin Settlement, the government organ that tries to push the Bedouin to leave their current villages and move to urban cents built by Israel. Fierce protests by the Bedouins foiled a far-reaching forced resettlement plan a year ago.

Ariel, who only a few months ago lamented that Israel's south "is full of Bedouins", does not seem to be the right man to heal these wounds.

'A barrel full of gunpowder'

The Civil Administration's powers over the realities in the West Bank are huge. It has the authority to approve a new settlement, to enlarge an existing one, to expropriate lands and so forth. If Ben Dahan, who only lately claimed in a radio interview that "the Arabs are animals, not human beings," will indeed take charge of the Civil Administration, the Sfard believes "it will be like giving the biggest pyromaniac in the neighborhood a barrel full of gunpowder".

Sfard believes it is unlikely that Netanyahu will allow the Jewish Home to decide when and where new settlements will rise or even which new neighborhood will be built in the existing settlements in the West Bank. He has had bitter experience with Uri Ariel, who as construction minister in the last government surprised him by announcing the approval of new housing units in the West Bank and East Jerusalem - something which caused embarrassment to Israel with regard to the US administration and Europe. But it is not impossible, says Sfard, that things may go wrong.

Shimon Riklin, a right-wing commentator and a member of Jewish Home, claims that his party wants this job "only to equate between the rights of Jews and Palestinians in Judea and Samaria", since Jews, according to him, are discriminated against by the current Civil Administration.

The nomination of a deputy to the defence minister from the Jewish Home party is therefore seen as another step to normalise the Israeli presence in the West Bank and give the settlers the impression that they are living in Israel and not in an occupied and disputed area.

It certainly helps to boost the self-confidence of Jewish Home and the settler community in general, as they will know that one of their men is sitting in this sensitive post.

Instead of profiting from his impressive victory in the elections two months ago, Netanyahu found himself pushed against the wall with a razor-thin majority after Avigdor Lieberman decided to stay out of his government. He had no choice but giving Bennet, whom he despises personally and with whom he disagrees politically, everything he asked for. Bennet was able to twist this to his advantage and asked for extensive control over issues regarding the relations with the Palestinians, inside Israel and in the West Bank.

Bennet’s demands may have been a political trick, or he may have serious intentions to use his new-found powers to implement his ideas, but he has certainly got closer to that gunpowder barrel.

Photo credit: Jewish settlers look at the camera as they walk to the Palestinian side of the city of Hebron 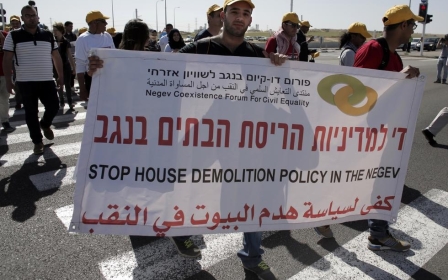