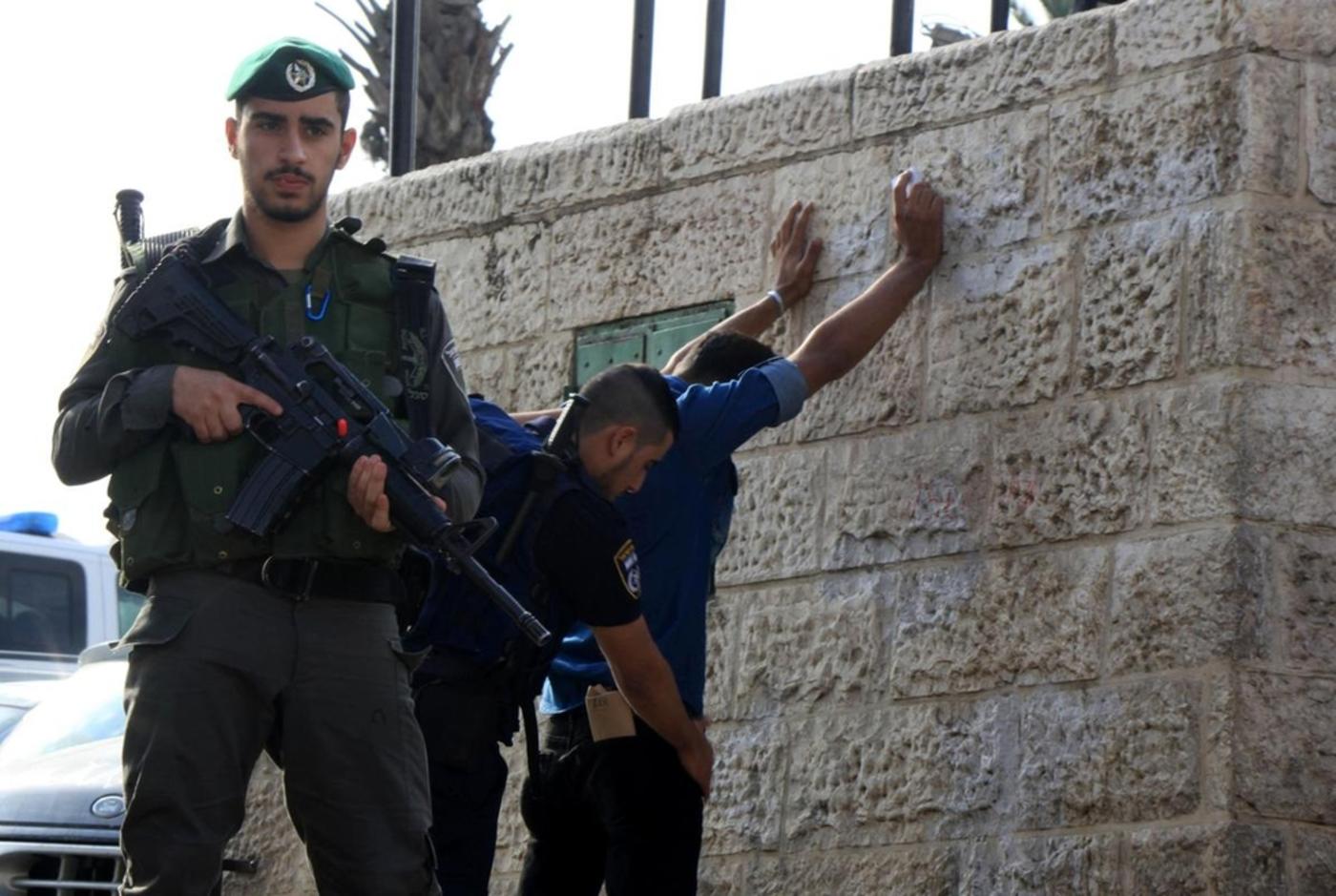 Israeli leaders have a long history of levelling the accusation of ‘incitement’ against Palestinian officials. In recent weeks, barely a day has gone by without Israeli Prime Minister Benjamin Netanyahu or members of his cabinet claiming that Palestinian President Mahmoud Abbas is encouraging or instigating the recent youth-driven rebellion.

It has reached ridiculous levels. On Sunday, Israeli Energy Minister Yuval Steinitz claimed “the level and intensity of the incitement and the level of anti-Semitism” from Abbas “is the same level as [Adolf] Hitler.” Two days later, Netanyahu declared that it was the Mufti of Jerusalem who convinced Hitler to exterminate the Jews.

The Israeli government repeats accusations of ‘incitement’ ad nauseam, but on the ground its policies are guaranteed to provoke yet further Palestinian anger and resistance. This toolbox of repression, familiar but intensified, is intended to crush an anti-colonial revolt through collective punishment, discrimination, and violence.

As of October 21, there were 35 checkpoints and closures in Occupied East Jerusalem, positioned at entry points to Palestinian communities. Some have concrete blocks completely preventing the passage of vehicles. Over the weekend, a 65-year-old Palestinian woman died after being delayed at a checkpoint, as Israeli forces turned a 6-minute drive to hospital into a 45-minute journey.

According to Israeli human-rights NGO B’Tselem, restricting Palestinians’ freedom of movement “constitutes collective punishment that is prohibited under international law.” Such an approach, the group added, is “illegal and immoral.” An Amnesty International researcher, after visiting Issawiya, said that what he saw “was the collective punishment of thousands of people.”

This is an all too familiar reality for Palestinians in the West Bank of course, where Israel maintains more than 400 different types of closures – from checkpoints to earth mounds. As Meron Benvenisti wrote in 2002, the checkpoints’ function “is to send a message of force and authority, to inspire fear, and to symbolize the downtrodden nature and inferiority of those under the occupation.”

In remarks to Israeli media on October 16, the Border Police commander in Jerusalem referred to the roadblocks as “pressure levers” which “are activated to stop the attacks … so that residents will condemn and oppose these acts.” As The Association for Civil Rights in Israel noted, such an approach “amounts to prohibited collective punishment and is therefore illegitimate and illegal.”

The Israeli government is also seeking to strip citizenship or residency status from Palestinians suspected of carrying out attacks. Some officials, like Culture and Sports Minister Miri Regev, even want to revoke the citizenship of suspected assailants’ relatives.

[E]ven though Jews have also been involved in severe security and criminal incidents, and some of them have also been sentenced, the status of residency or citizenship has never been revoked from a Jewish person for reasons of ‘breach of trust.’

Israeli authorities have also been pursuing a policy of mass arrests, while also increasing the penalty for those convicted of stone-throwing and other ‘attacks’. On October 20, an Israeli police spokesperson claimed that 490 Palestinians had been detained since the beginning of the month – with authorities vowing “hundreds” more arrests of East Jerusalem Palestinian youth.

The wave of arrests has included dozens of Palestinian citizens, including the detention of around 100 activists from the likes of Nazareth, Haifa, Tamra, Jaffa, Taybeh, Umm al-Fahem and Arrabe, in the space of just one week.

In late September, the Israeli cabinet issued a temporary order to “set a four-year minimum sentence for stone- and firebomb-throwers”, an order to remain in effect for three years. Another provision stipulates the withholding of state benefits from parents of a convicted minor, if “the offense was motivated by political beliefs or in connection with terrorist activity.”

In the West Bank too, Israeli occupation forces are rounding up dozens of Palestinians on a nightly basis – 47 were arrested in the early hours of October 21 – with around 450 detained in the space of three weeks. In Nablus alone, some 70 Palestinians have been seized, “some of whom are placed under administrative detention; without charge or trial.”

In addition to closures, revocation of residency and arrests, the Israeli government has responded with intense violence, killing and maiming unarmed Palestinian demonstrators in the Occupied West Bank, East Jerusalem, and Gaza Strip. This follows a decision by Israel’s security cabinet to relax the open fire regulations for occupation forces using Ruger rifles (0.22 caliber live ammunition).

As Amnesty International has noted, “the details of the open fire regulations governing the use of .22 ammunition by Israeli forces in Jerusalem, as in the West Bank, have not been made public.” But the impact is clear: one of the Palestinians killed this month was 13-year-old Abd El-Rahman, struck in the chest with a 0.22 caliber bullet in Aida refugee camp.

According to B’Tselem, Abd El-Rahman was at least the fourth Palestinian to be killed by 0.22 caliber bullets fired by Israeli occupation forces since January this year, with dozens injured. Disturbingly, given that the weapon has now been introduced in East Jerusalem, the Israeli NGO noted how “snipers [already] regularly fire 0.22 bullets at Palestinians throughout the West Bank.”

In Gaza, Israeli forces perpetrated a massacre of unarmed protesters at the border fence on October 9, killing 10, including two children. The following day, two more Palestinians were shot dead at the fence in similar protests. By mid-October, at least 170 Palestinians had been shot by live ammunition during demonstrations along the Gaza border.

Some 2,000 Palestinians have been hit by live ammunition, or rubber-coated metal bullets. Back in June, human rights campaigners documented how “the frequent use of live ammunition at demonstrations” was the “implementation of an unlawful policy.” In 2014, 15 percent of all Palestinian injuries in the West Bank were from live ammunition – in 2013, it was 4 percent.

On July 3, Colonel Yisrael Shomer killed a fleeing Palestinian teenager, Muhammad Kasbeh, shooting him three times from behind after youths had thrown stones at an army vehicle near Qalandiya checkpoint. Contrast this with the numerous cases in recent weeks (and before) of Israeli occupation forces watching and protecting Jewish settlers as they throw stones at Palestinian civilians.

While Israeli occupation forces have been gunning down unarmed Palestinian protesters, Israeli police have been “pursuing ‘shoot-to-kill’ actions in circumstances that appear not to have posed an imminent danger to them or to others,” writes Adalah, a legal centre for Israel’s Arab minority. These incidents are all the more disturbing “in light of the statements by politicians and police officials praising [these] actions by the police.”

A number of Israeli human-rights groups signed a joint statement last week, deploring “a worrying trend to use firearms to kill Palestinians who have attacked Israelis or are suspected of such attacks.” The statement notes that “in instances when Jews have been suspected of attacks, none of the suspects has been shot.”

Finally, Israel is embracing a policy of punitive house demolitions, targeting the homes of suspected Palestinian attackers. On October 6, Israeli forces blew up two homes in East Jerusalem and sealed a third, “as collective punishment for attacks perpetrated by relatives of the people living in the three homes.” The blasts destroyed two adjacent apartments that were home to 11 people, including seven children.

The policy, which the Israeli military itself deemed in 2005 to be inefficient as a ‘deterrent’, was resumed in July 2014, and has been repeatedly rubber-stamped by Israel’s Supreme Court. Condemned as illegal under international law by the UN and rights groups, in the words of Human Rights Watch, “when carried out in occupied territory, including East Jerusalem” it is “a war crime.”

These various responses by Israel to this latest Palestinian revolt are characterised by violations of international humanitarian law and brutality. They are thus representative of the long-standing conditions of occupation and apartheid that engendered this Palestinian uprising in the first place. It is a toolbox of repression that is inhumane, and ultimately, counter-productive. Occupation
Not in my name
David Hearst