Jeremy Corbyn and anti-Semitism: How his critics ignore Israel's brutality 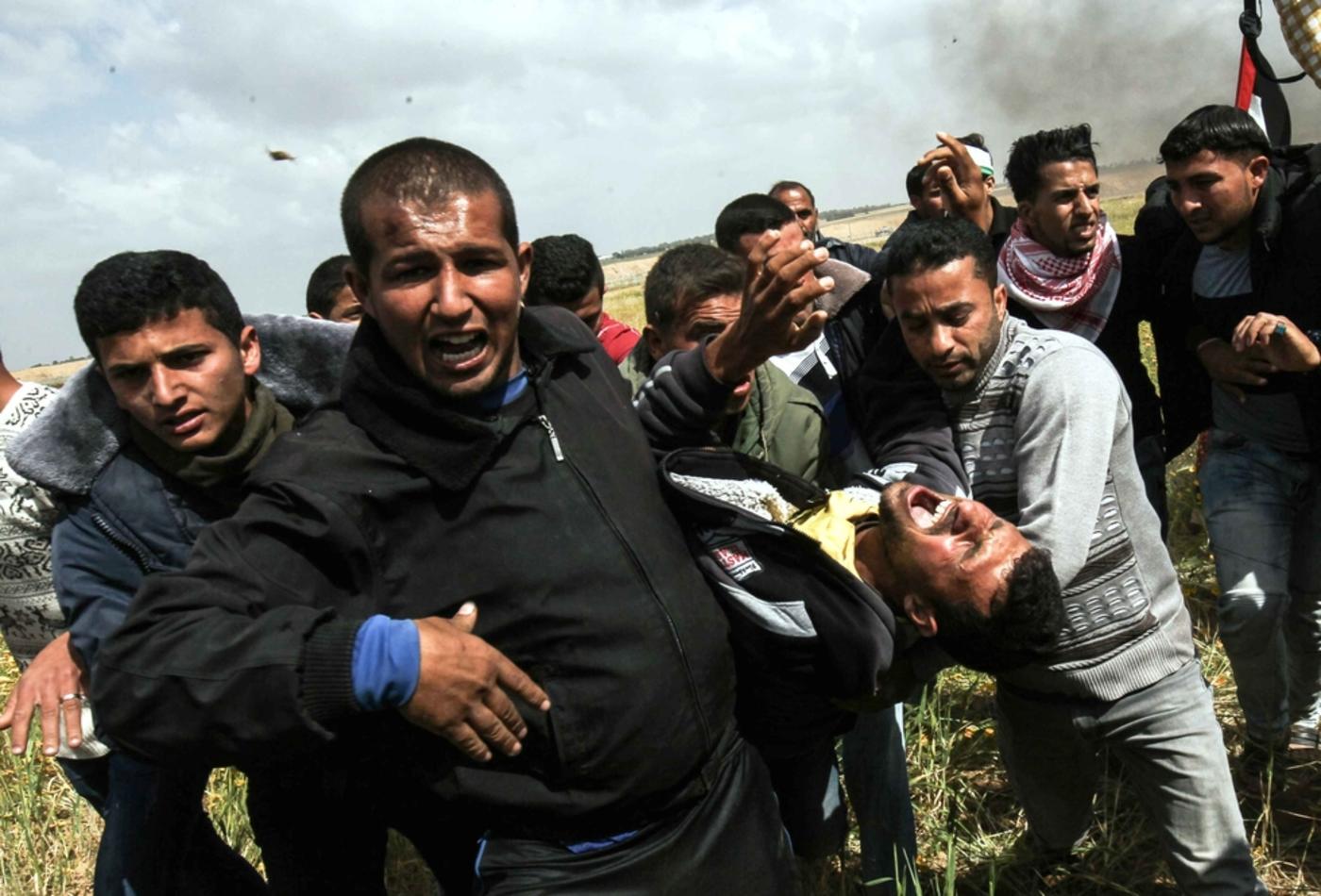 During the past few days we have seen a chorus of denunciation of Labour leader Jeremy Corbyn about anti-Semitism. He has been fiercely attacked in almost every mainstream British newspaper, by the Conservative Party, by many of his own MPs and, most importantly, by many British Jews and their representative organisations.

I joined in that chorus. I believe that, at the very least, Corbyn has allowed himself to be associated with ugly anti-Semitic groups.

By doing, so he has inadvertently done a grave disservice to the Palestinian cause. He has presented a free gift to the government of Benjamin Netanyahu, allowing it, once again, to identify its interests with those of the Jewish faith itself.

Corbyn is both courageous and right to highlight injustice against Palestinians. Indeed on this subject I am afraid that many of Corbyn’s critics are guilty of very severe double standards

Corbyn was not helped when his shadow leader of the House, Valerie Vaz, defended his record on radio as a leader “steeped in anti-Semitism”. The simplest explanation for this remark is that Vaz is a dimwit of international class, but it is also unconsciously revealing of the mentality of the Corbyn entourage that she did not know the meaning of the word "anti-Semitism".

I myself do not believe that Corbyn himself is any kind of racist - but he has been lax about the company he keeps. That is why I wrote about Corbyn and anti-Semitism in my Daily Mail column last Saturday.

I was moved to write this in part because three prominent Jewish organisations – the Conservative Friends of Israel, Labour Friends of Israel and in particular the Board of Deputies of British Jews itself – have all denounced Corbyn’s failure to stamp out anti-Semitism in the Labour Party.

I continued to believe, however, that Corbyn is both courageous and right to highlight injustice against Palestinians. Indeed on this subject I am afraid that many of Corbyn’s critics are guilty of very severe double standards.

Bear in mind that as the criticisms of Corbyn grew more intense last Friday, something terrible happened in Gaza.

The Israeli army killed 16 Palestinians (a 17th later died) at a mass demonstration on the Gaza-Israel border. Not one of the dead appears to have been armed (although the Israeli army has disputed this). None succeeded in breaching the border fence. Footage appears to show some shot in the back with live ammunition as they were walking away from the fence. There were no reported Israeli army casualties or indeed Israeli casualties of any kind. As far as I can tell they were never even under threat.

There has been no word of condemnation of the Israeli government from the Labour Friends of Israel, the Conservative Friends of Israel or the Board of Deputies. They did not even join the UN secretary-general, Antonio Guterres, in seeking a judicial inquiry.

To someone of my generation, the events of last Friday vividly recall Bloody Sunday on 30 January 1972, when 13 unarmed Irish Republican protestors were shot dead by British soldiers. A 14th died several months later from his injuries.

The Saville Inquiry into the killings found in 2010 found that none of the dead protesters posed a threat. David Cameron, the then-UK prime minister, agreed that the killings were “unjustified” and “unjustifiable”. The verdict was extraordinarily painful to the millions of patriots in our country who venerate our armed forces and recognise their sacrifices.

We still love our country. We still respect its armed forces. But we do not give them uncritical loyalty. We accept that sometimes our governments and our armed forces fall below the standards we expect of them.

The Israeli military by contrast defends last Friday’s actions. It says it only opened fire against specific “violent instigators” and those who approached the border. It said it was notable that 10 of those killed were members of Hamas's armed wing.

But Human Rights Watch said the protesters posed no imminent threat to life and that the killings were unlawful. Many of us have now seen painful and upsetting footage of non-violent protesters who were no threat to anyone when they were shot.

To my eye, the Israeli behaviour appears worse than Bloody Sunday because there is evidence it was premeditated. The Israeli army announced, in a tweet that has since been deleted, that its crackdown was “accurate and measured” and “we know where every bullet landed”.

Israeli military tweeted earlier "we know where every bullet landed" in Gaza. Reporters asked repeatedly how many live rounds were fired + how many people were hit but a spokesman said they didn't have figures.

By contrast, Saville found that the British shootings were a response on the spur of the moment, to a situation where our forces had lost self-control.

Bear in mind also that a staggering number of Palestinians, at least 700, were injured by Israeli live fire. Some 1,400 were injured in total. For Bloody Sunday the comparable number was just 14 - a fraction of Palestinian casualties last Friday.

That is why we have a duty to challenge Corbyn’s attackers over their silence about Friday’s events.

It’s clear that a double standard is at work, starting with the Conservative Party, which is so keen to exploit and aggravate Corbyn’s problems that it is calling a parliamentary debate on anti-Semitism on 17 April.

But the Conservative Friends of Israel – which counts an estimated 80 percent of Tory MPs as members and can normally be relied to bring Palestinian atrocities to public attention – has been mostly silent.

It did however publish a news story four days after the shootings, which described the violence as an “exchange of fire”; attached the words “terror” and “terrorist” to Hamas three times in the first four paragraphs; and only provided comment from the Israeli side.

There is no reason why it should not make mischief. But this Conservative government has failed to condemn Israel for the Good Friday massacre. Foreign Office minister Alistair Burt, significantly a former vice chairman of the Conservative Friends of Israel, issued a platitudinous message which included a pro forma call for an end to violence. He too failed to support the UN secretary-general’s call for an inquiry.

It takes no great imagination to speculate as to the response from UK Prime Minister Theresa May had 17 unarmed Israelis been shot dead by a Palestinian gunman, along with hundreds more injured.

Press coverage in Britain has been likewise been shamefully muted. The Guardian reported the event in a neutral and dispassionate way as the result of so-called “clashes”, although subsequent coverage was more balanced.

The Sunday Times, which has led the way in the most brutal criticisms of Corbyn, put the story on its international pages on page 21 under the headline “Israel warns of raids inside Gaza to curb border unrest”.

There has been no response of any kind so far from the Labour Friends of Israel, an organisation which often highlights Palestinian terror attacks. However a spokesman told MEE that LFI was preparing a "lengthy analysis" to be published this week.

As for the Board of Deputies, it actually defended the Israeli atrocity with the following tweet: “Alarming developments at Gaza border as Hamas once again using its civilians - inc children - as pawns. We call for calm & a return to negotiating table, resulting in a secure, Jewish & democratic Israel alongside a viable & vibrant Palestinian state.”

The selectiveness of Corbyn's critics

This forms part of a pattern. Netanyahu is the leader of the most right-wing, and indeed racist, government that Israel has ever had.

For example, in January his culture minister put out a video of herself at a football match surrounded by fans chanting “burn down your village” to the opposing, Arab, fans. She can’t be blamed for the behaviour of the crowd. But posting a video of their murderous chants on her social media account makes her complicit.

There were no protests from the British government. No coverage in the British press. No protests that I can find from the CFI, the LFI and the Board of Deputies (although the LFI provided me with several examples when it has criticised the Netanyahu government on other occasions; and the BOD said it has criticised the Israeli government on a number of occasions, citing its criticism of Netanyahu over his handling of the Western Wall).

Those who condemn Corbyn for being soft on anti-Semitism cannot afford to be soft on Netanyahu. The state of Israel was built upon ideals which are still revered throughout the world, above all to be a haven against oppression and racism.

Corbyn’s critics cannot allow Netanyahu to turn it into an agent of oppression and racism. They are doing exactly that by being so selective in their calls for decency and justice.

Photo: Faris al-Raqib (front-L), a member of the Islamic Jihad movement, who was later killed himself, carries an injured Palestinian man as they run for cover during a protest in Gaza on 30 March 2018 (AFP) 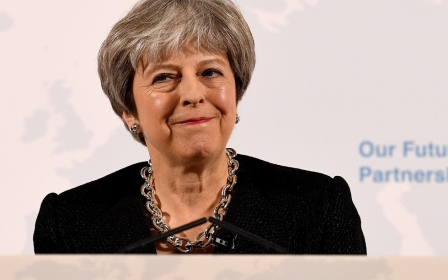 Islamophobia
To hold off Labour, the Tories are ready to play the Muslim card
Peter Oborne