Kareem Chehayeb
Would another cog in the feudal-mafia machine of Lebanese politics do the people any good? 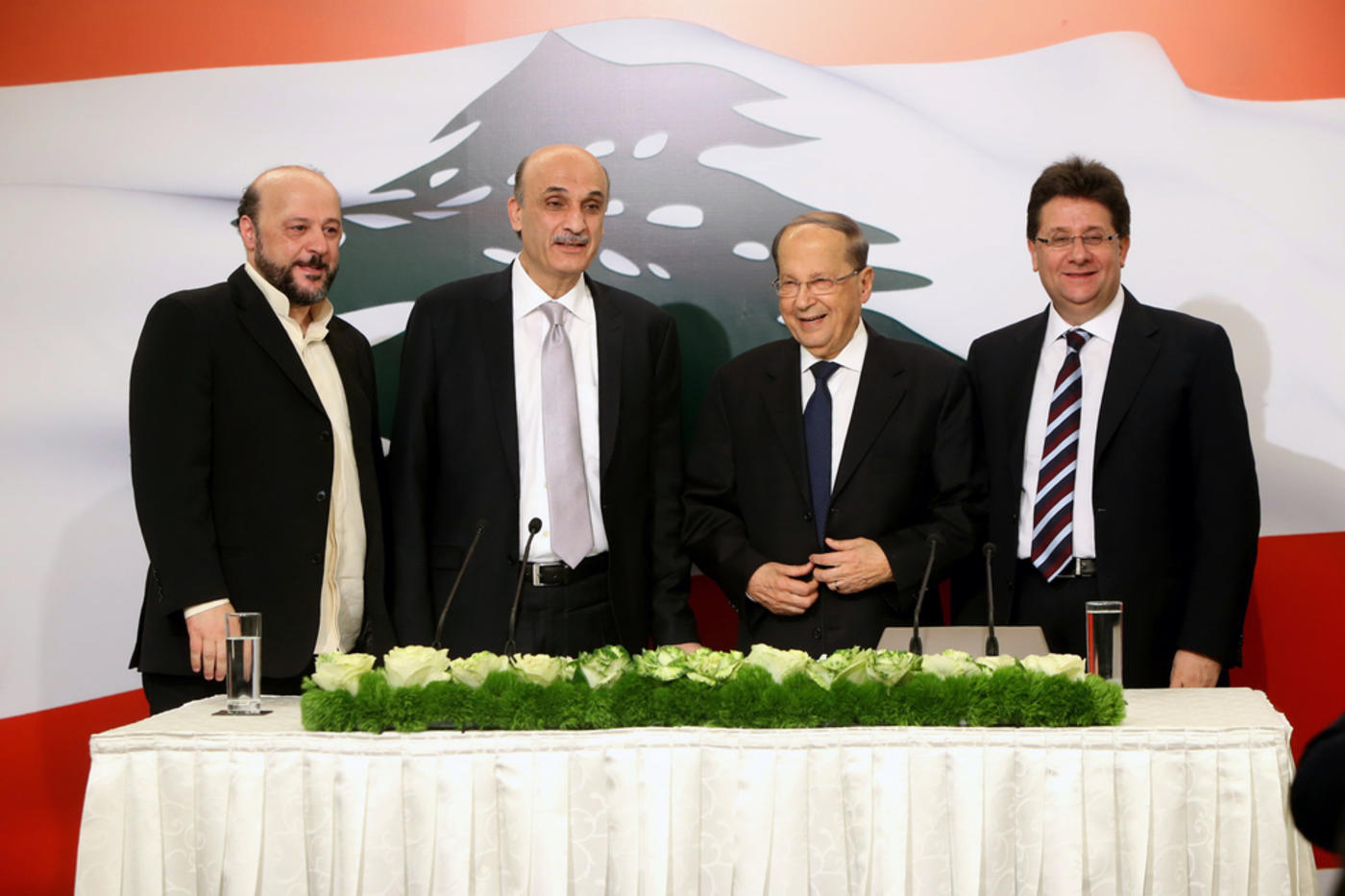 The presidential seat at Lebanon’s Baabda Palace has been vacant since 24 May 2014.

As parliament has failed time and again to have a fruitful session regarding the president, the political vacuum has always been part of the discussion since then.

The political vacuum has become the butt of jokes among residents in Lebanon, who still laugh at the fact that it took less time for Brazil to bring in a Lebanese president

It has become the butt of jokes among residents in Lebanon, who still laugh at the fact that it took less time for Brazil to bring in a Lebanese president. It has been used as an excuse for almost all of Lebanon’s problems by the corrupt establishment - even the garbage crisis.

And major news outlets around the world always find a way to plug in this entertaining fact in almost every story about Lebanon.

But here’s a reality check: ending that presidential void won’t solve any problems. In fact, over the past two years, it’s been business as usual in Lebanon.

Don’t judge a book by its cover

All it takes is a good look at Lebanon’s constitution, most recently amended in 1989 as part of the Taif Agreement, ending a brutal 15-year long civil war.

Lebanon’s three most powerful seats in government belong to the speaker of parliament, prime minister and president. While the constitution does not state that incumbents must belong to certain sects, the National Pact, a verbal agreement made in 1943 between multi-confessional leaders, allocated key positions in government and the military to different sects, notably a Maronite Christian president, a Sunni Muslim prime minister, and Shia Muslim speaker of parliament.

Today, the president is the least powerful among the three, and is best described as a subordinate. The official website of the Lebanese presidency explicitly states what they call “prerogatives” of the head of state, the vast majority of which are mere advisory roles, require the consent of the prime minister or speaker of parliament.

Prime Minister Tammam Salam is currently Lebanon’s acting president, and there has been no evidence that his power has increased in his new role.

Even the president’s most significant role, the appointment of a prime minister, cannot be done without the advice of the speaker of parliament. This so-called consultancy truly puts it lightly given that the current speaker of parliament, Nabih Berri, has held that position since 1992 alongside his leadership of the Amal Movement, and is one of Lebanon’s most powerful politicians. None of the presidents elected after the civil war ended have come close to his power and influence.

Let’s look at the last two presidents, former military generals Michel Suleiman and Emile Lahoud. Suleiman was a consensus candidate: he was elected to end a previous vacuum as a result of constant rifts between Lebanon’s March 14 and March 8 factions. Lahoud’s decisions were all made with the approval of Syria, which at the time occupied Lebanon.

Things could actually get worse with a president

Lebanon’s political establishment decides on a president through parliament, the only national government branch elected directly by the people – the same one that has been illegally extending its terms since 2013. So it would not be farfetched to think that having a president has the potential of making things worse.

The most obvious example of a president who made the country worse is Emile Lahoud, who illegally extended his term by three years, with help and influence from the Syrian government, despite it being unconstitutional.

And given the sway of foreign financiers over the Lebanese establishment, a collection of civil war-era political entities in suits, many candidates to fill the void wouldn't necessarily improve the situation.

While no army formally occupies Lebanon, excluding the Shebaa Farms occupied by Israel, the country’s political establishment is still heavily reliant on foreign aid from regional countries and major powers, from the United States to Russia, from Saudi Arabia to Iran.

A recent example is Saudi Arabia pressuring Lebanon to weaken ties with Iran and to take a harsher stance on Hezbollah’s role in Syria by repealing a promised $3bn injection of military aid via French weapons. A further $1bn that was promised for Lebanon’s police, the Internal Security Forces (ISF), would have been revoked as well, but that aid was already given.

Despite Lebanon’s plethora of security concerns, the ISF used their new riot gear and weapons to viciously attack independent protesters throughout the summer and fall of 2015 who opposed the entire political establishment.

Would another cog in the feudal-mafia machine of Lebanon really do the people any good?

Michel Aoun is not an exception in Lebanon’s establishment when it comes to wily manoeuvring best described as a painful amalgam of feudalism and mafia-style rule. It's there in his party’s structure, rhetoric and artful flip-flopping of positions, as well as local and regional alliances.

Currently a member of parliament, Aoun was a military general, and towards the end of the Lebanese civil war led a rebellion against the occupying Syrian army, but was defeated and fled to France.

Fifteen years later - and less than two weeks after Syrian troops left Lebanon after large-scale protests - he returned to Lebanon on 7 May 2005, only to eventually sign a memorandum of understanding with Hezbollah and align his newly formed political party, the Free Patriotic Movement (FPM), to the pro-Syria March 8 alliance. Though he is still the main figure of the party, the de facto leader of the FPM is Foreign Minister Gebran Bassil, Aoun’s son-in-law.

Ever since the civil war, Aoun has both supported and quarrelled with Samir Geagea, leader of the Lebanese Forces, another Christian political party. In 2005, Geagea was released from prison, and he and Aoun both spent the next decade trying to become the next president. Back in 2008, the lack of compromise played a role in temporarily reviving violence across Lebanon reminiscent of the civil war - even Hezbollah was involved, temporarily occupying Beirut neighbourhoods. An emergency Qatari-mediated agreement led to the election of military general Michel Suleiman.

Even after Suleiman’s term ended, the rivalry continued between the two led to a strange plot-twist, where Geagea and the Lebanese Forces endorsed Aoun as president in the interest of Christian and national unity.

So what can we expect from Aoun? The former military general’s supporters chant “God, Lebanon, and only Aoun” at his rallies, reminiscent of the idolisation of Lebanon’s political elite in general. When Foreign Minister Gebran Bassil was inducted as de facto leader of the FPM, he looked to Aoun during his speech and said, “My comrades and I kneel before you…so you can bless me, as I nor anyone else can replace you.”

The FPM takes a pro-Assad stance when it comes to the Syrian conflict. Despite trying to portray themselves as more secular than other Christian parties in Lebanon, Bassil often betrays the sectarian and racist ideology that mimics the rest of the establishment.

Having called the refugee crisis a “threat to Lebanon’s identity”, he has also recently stated at Lebanese diaspora conventions in the US that while he supports the right for Lebanese women to pass their nationality to their children, he would not include that right to those married to Palestinians and Syrians.

Distraction from the real problems

If we set aside the vast majority of Lebanon’s issues, including the rubbish crisis, the lack of adequate public services including healthcare, water, electricity and education, which are rooted in the country’s neoliberal post-civil war reconstruction project, there are still bigger fish to fry before being remotely irked by the lack of a president.

Despite having never lived in the town of Aley, I am only eligible to vote for candidates there and not in Beirut where I actually live

Lebanon’s only two forms of direct elections, parliamentary and municipal, have archaic voting laws where people vote for candidates in their hometowns, not places of residence. Despite having never lived in the town of Aley, I am only eligible to vote for candidates there and not in Beirut where I actually live.

There is also a parliament that has been illegally extending its term over the past three years, using security concerns as an excuse, despite the fact that elections went on routinely during the civil war. When people took to the streets, they were met with riot police and barricades.

Then there is the speaker of the parliament Nabih Berri who has held his position since 1992. Perhaps there ought to be some term limits for both speaker of parliament and prime minister. But, as expected, that has never been part of the discussion.

Laws regarding many social issues do not exist in the form of a civic code, including domestic violence, and go back purely to interpretation from respective religious institutions. This has not been changed since Lebanon followed the Millet System under the Ottoman Empire.

So why is the establishment making such a big deal out of the presidency problem? Simple. It makes a good distraction for citizens whose distrust and disillusionment of the establishment increases by the day. Right now, many want to organise and get to the bottom of these problems, and the last thing the Lebanese elite would want is for the media to focus on how they’re profiting off a failed state.

Photo: Chairman of the Executive body of the Lebanese Forces Samir Geagea (center, left) standing alongside Michel Aoun (center, right), in the Lebanese parliament, in Maarab, northeast of Beirut this January (AFP)