Belen Fernandez
Migrant domestic workers exist at the mercy of the kafala system - in which they are sponsored by, and beholden to, their Lebanese employers, and are explicitly excluded from Lebanese labour laws 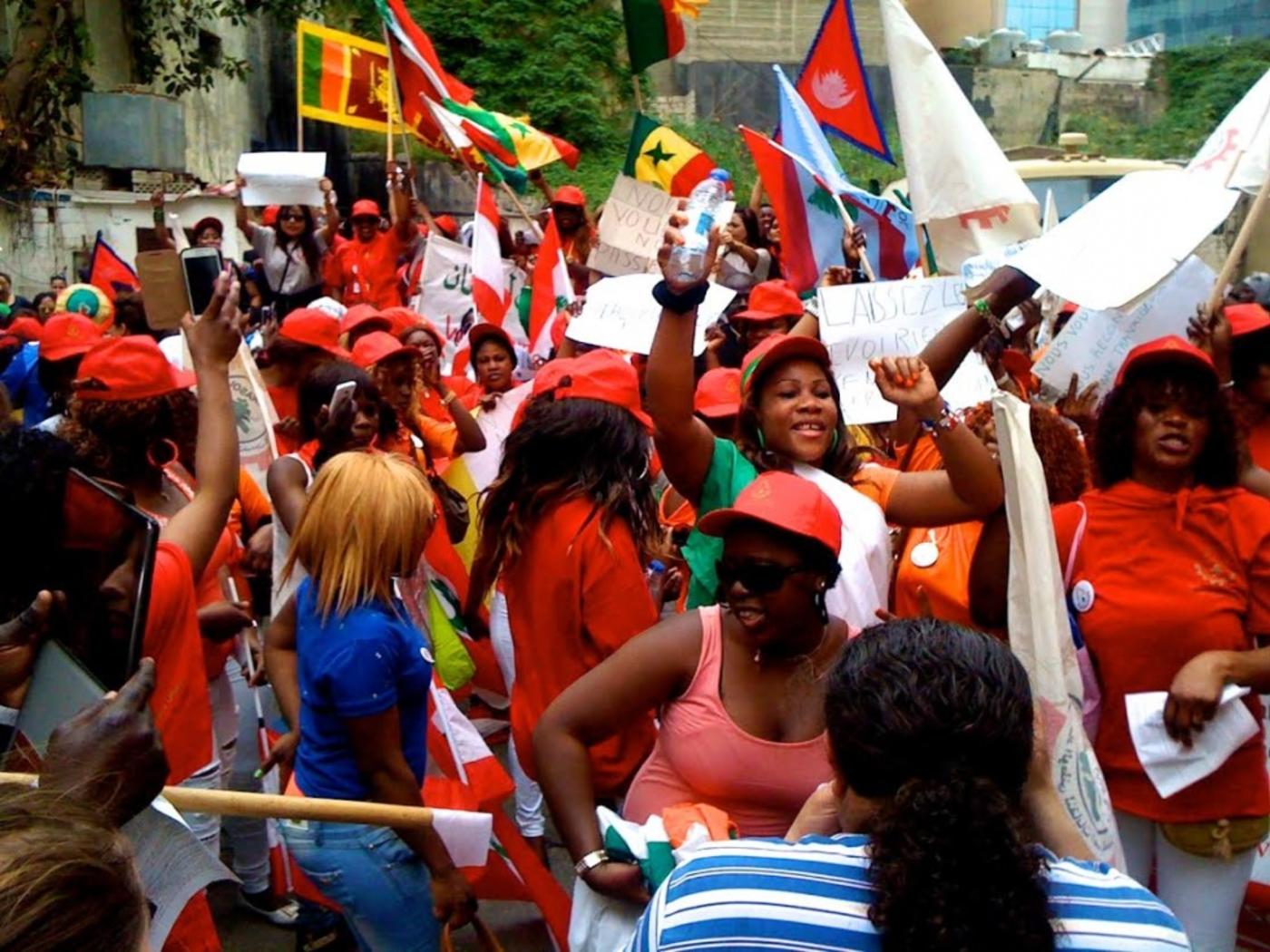 On Sunday, 3 May, a Workers’ Day parade and festival were held here in Beirut. The events were led by the newly inaugurated Domestic Workers’ Union that seeks, among other things, to represent the interests of more than a quarter of a million female migrant domestic workers in Lebanon. The union’s formation earlier this year was rejected by the Lebanese Labour Ministry.

The ostensible reason for holding the celebration on a Sunday rather than on 1 May, International Workers’ Day, was to maximise the number of participants. The problem, however, is that many household employees in Lebanon don’t get a single day off - hence the utility of a union dedicated to fighting for this and other rights.

The Lebanese government has declined to ratify the International Labour Organisation’s Domestic Workers Convention, which specifies some basic elements of “decent work” for domestic workers. These include not only the right to collective bargaining and 24 consecutive hours of weekly rest, but also protections from other common phenomena in Lebanon, such as the confiscation of passports by employers. Article 15 of the convention states that workers “recruited or placed by private employment agencies” should be protected “against abusive practises”.

Luckily for abusers, the ILO’s recommendations appear to be anathema to the state, with the Labour Ministry lambasting the domestic workers’ union as “illegal”.

As the situation currently stands, migrant domestic workers exist at the mercy of the kafala system - in which they are sponsored by, and beholden to, their Lebanese employers, and are explicitly excluded from Lebanese labour laws.

The arrangement is often facilitated by housemaid recruitment agencies in Lebanon that profit handsomely from the maid trade, importing women from Ethiopia, Sri Lanka, Madagascar, the Philippines and elsewhere. Lebanese Labour Minister Sejaan Azzi has reported 627 registered housemaid offices in the whole of the diminutive nation.

While researching a story for Al-Jazeera America on migrant domestic workers in Lebanon back in March, I visited a few recruitment agencies in Beirut pretending to be an elite refugee from Venezuela in the market for a domestic servant.

At one of the offices I visited, I was assured that my maid would require no time off whatsoever. At another one - shamelessly called “Yes Madam” - the woman behind the desk conceded that, if I were feeling especially charitable, I could grant a day off here and there; she also stressed that prospective maids’ “biodata” was intensely examined prior to employment to determine mental stability, thus reducing the customer’s risk of ending up with a suicidal employee.

Suicides and suicide attempts do indeed abound among the migrant domestic worker population, with women regularly hanging themselves and leaping off of buildings. Reading Lebanese news headlines on the subject often invites a sense of morbid déjà vu.

But there’s hardly any guarantee that even the most exhaustive biodata screening by housemaid recruiters - presumably with no qualifications in psychology or the behavioural sciences - will guard against self-destructive tendencies on the part of women forced into slavery-like conditions that frequently involve mental, physical and sexual abuse.

A more prevention-focused model would instead target the institutions that help perpetuate the dehumanisation of migrant life to the point of blatant commodification - examples of which abound. During my pretend housemaid-scouting expedition, the first recruiter I spoke with vowed that, if my maid proved defective within the first three months, he would replace her for free.

Around this same time, another recruiting service inundated Lebanese mobile phones with an advertisement for Mother’s Day, celebrated in Lebanon in March. The ad contained gift ideas to “indulge Ur Mom,” including “special offers on Kenyan & Ethiopian nationalities for a period of 10 days” [sic].

Labour Minister Azzi was quoted in Lebanon’s Daily Star newspaper as denouncing the ad - whether real or fake - as “immoral” and an “insult to human rights and dignity”.

Apparently on a roll, the minister was again quoted by the same paper three days later, slamming the Lebanese employers of a Bangladeshi maid who had just killed herself following a hunger strike over not being allowed to return to Bangladesh to see her children. Her employers, Azzi contended, had not been behaving “humanely”.

As if the representatives of a system predicated on the denial of human rights have any right to preach about them.

A reason to party

How, then, to go about wrenching rights from Lebanon’s panorama of inhumanity?

One way to start is by flouting the system. At the march in Beirut this weekend, I spoke with a young woman from Côte d'Ivoire who had spent the past six years working 18-hour days, seven days a week. She had defied her employers’ orders to attend the parade, asserting: “We are not slaves, we are workers”.

I then spoke with one of the organisers in the nascent Domestic Workers’ Union, a Nepalese woman who was also collecting money for earthquake relief. She had been in Lebanon 12 years and had only begun emerging from the house after four and a half, when she made the acquaintance of other members of the Nepalese community. She now worked as a caregiver for a single individual and was permitted a relative degree of freedom.

Her current goal with the union, she said, was to help other women who were still thoroughly oppressed, by spreading the notion that ground could be gained via collective action. This was the message that was on display on Sunday as a few hundred women marched and danced together, alongside pockets of Lebanese and other supporters, injecting a breath of fresh air into an often asphyxiating Beirut atmosphere characterised by materialism, pretention, and forcible divisions along sectarian and socioeconomic lines.

As naïve as it may be to express even an iota of optimism in the face of entrenched obstacles to anything resembling justice in Lebanon, the phrase “united we stand” exists for a reason. And as long as the idea of migrant worker unity constitutes a thorn in the side of Lebanon’s tyrannical sectarian elite, that itself is a reason to party.