The looting of Aleppo: ‘We’re living in medieval times’ 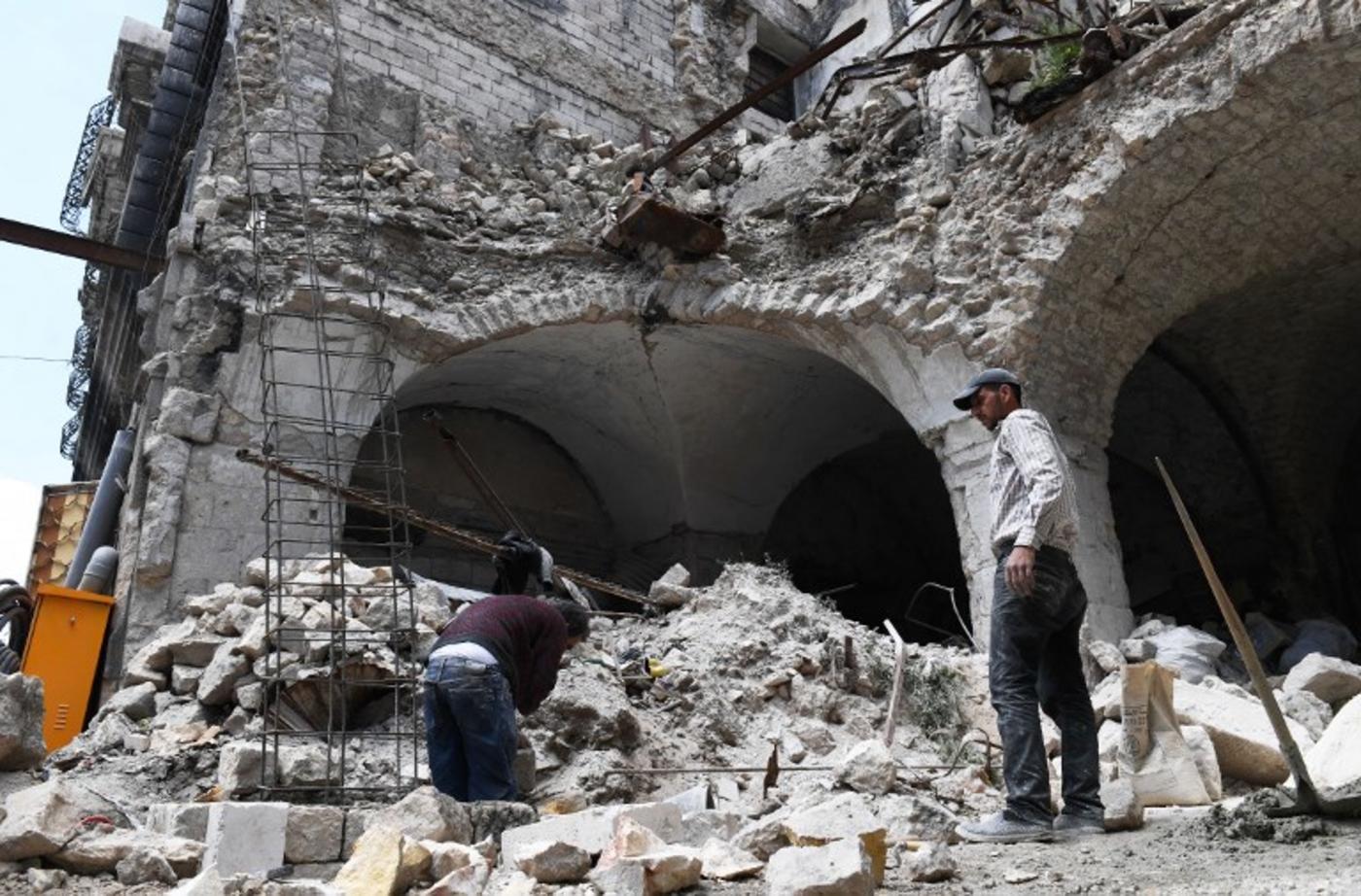 Compare and contrast these two scenes: in Berlin, a team of highly qualified Syrian architects under the auspices of the Museum of Islamic Art carefully builds a digital archive of Aleppo’s historic monuments to help with future restoration. In Aleppo, a gang of semi-illiterate thugs under the auspices of "The Tiger" - Russian President Vladimir Putin’s favoured Syrian warlord, General Suheil al-Hassan - takes credit for ineptly restoring the same ancient mosques it helped to destroy.

While a third of Syria’s housing stock is estimated to have been destroyed during seven years of war, the new battle is between armies of frustrated conservation experts outside the country and armies of looters acting with impunity on the ground.

In Aleppo, a new poster hangs from buildings in “liberated” areas back under regime control, reading in grammatically incorrect Arabic: “Together it will come back more beautiful.” It is tellingly ambiguous about exactly who will bring Syria back more beautiful; an unsavoury mix of gangs and shabiha thugs calling themselves the “Tiger’s Men” are currently claiming that role.

Their most recent trophy, Al-Akhal Mosque, dating to 1485 in the Jdeideh quarter, now bears garish, green-painted mortar. A YouTube video lauds their achievement, calling them the “White Hands”, perhaps meant to portray angelicness or innocence. They rebuilt the nearby Al-Fadila school and erected a plaque to ensure posterity knew it was them.

No one asked to see their permissions, according to a local source. Corruption is rampant throughout the city as gangs of shabiha (literally “ghosts”, the word used to describe armed militias loyal to President Bashar al-Assad) run the show. Hated by many Aleppo residents, they are predominantly Alawites and Mardinli Turkmen.

The government does not want the communities to reconstitute themselves. On the contrary, it wants society to remain fractured. A broken society is easier to control

The Assad regime seems unwilling -or unable- to rein them in, turning a blind eye to their looting of local residents’ houses. “There’s a hierarchy for the booty,” an Aleppo resident who asked to remain anonymous told MEE. “The TVs are for the officers, the fridges and washing machines are for the middle ranks, and the wood and wiring pulled out of people’s abandoned homes is for the lower ranks. It’s disgusting.

"We see the trucks loaded up with booty being driven off openly in broad daylight. They don’t need to do it in secret … It’s their reward for their loyalty. We’re living in medieval times.”

Whole swaths of central and eastern Aleppo have been destroyed by a combination of Russian and Syrian aerial bombardment and rebel tunnel-bomb explosions. All parties to the conflict share blame for the destruction of Syria’s chief trading city. Its status as a Unesco World Heritage Site afforded it no protection once the war arrived in 2012, a year later than in Damascus.

‘Opportunities for corruption have multiplied’

Today, the only official restoration underway is for the Great Mosque of Aleppo, a flagship project paid for by the Chechen president, a friend of Putin’s. The city’s churches and cathedrals have already been largely restored, thanks to well-connected priests and patriarchs close to the regime. Funds from wealthy Christian donors have somehow found their way in, despite financial sanctions.

Some individual homeowners engaged local labour to repair their damaged houses after the city fell in late 2016 - but then state structures started reasserting themselves. “It’s worse now than it was before the war,” said a resident from Aleppo. “At least back then, there was only one authority you had to get permission from. Now there are five, and each one wants his cut. The opportunities for corruption have multiplied.”

Ordinary residents in Aleppo did what they could after the city fell. The streets of Jdeideh, a frontline in the conflict, were full of rubble from the debris of aerial bombardment and underground explosions. Volunteers painstakingly cleared the streets, a process for which the government was quick to take credit.

On 28 September, the government even staged an international tourism day in al-Hatab Square, that was filmed by Al-Mayadeen, a pro-Syrian regime TV channel, and a Russian state TV channel, to show the world how Aleppo was returning to normal after the reassertion of regime control. But it takes a long time to loot a city of more than three million people, and as long as there is money to be made from the illicit plunder, it will continue.

In such an atmosphere, there is currently no scope for the repair of hundreds of Aleppo’s monuments. Local residents watch while their neighbourhood mosques, formerly the centres of their community, slowly disintegrate.

Winter months are the hardest, when rainfall can cause severe damage to buildings already in a precarious state. Domes with cracks or sections missing collapse, turning what would have been a relatively simple and inexpensive repair into a costly exercise that could take years.

The danger is that such buildings may even become too difficult and expensive to restore, simply because they have been neglected - victims of the bureaucratic inertia that is crippling all aspects of reconstruction in Syria. In many cases, all that would be required would be some plastic sheeting to cover the roof and make the building watertight - an exercise that would take only days and cost very little.

But the government does not want the communities to reconstitute themselves. On the contrary, it wants society to remain fractured. A broken society is easier to control.

A government that genuinely cared about its people and its communities would clamp down on the shabiha thugs and their mafia-style gangs. It would have the vision to provide microfinancing to small-scale businesses and to harness cultural heritage for sustainable development, encouraging employment and the revival of traditional crafts.

This shared heritage could foster a strong Syrian identity across religious and ethnic divides, becoming part of a nationwide reconciliation process. It could empower women, now outnumbering men by four to one in the workforce, and help them rebuild the destroyed foundations of their country.

After the war: Who's going to pay for Syria's reconstruction?
Read More »

Earlier this month, reports surfaced on the internet of two metric tons of looted antiquities discovered in The Tiger’s Damascus home. Is this how Syria comes back more beautiful?

Berlin’s team of Syrian architects - like everyone outside Syria, including Unesco - is powerless to intervene. All they can do is hope and pray that, when the day comes that Syria can finally benefit from their digital archive, something remains of Syria’s cultural heritage to be saved.

- Diana Darke is a Middle East cultural expert with special focus on Syria. A graduate in Arabic from Oxford University, she has spent over 30 years specialising in the Middle East and Turkey, working for both government and commercial sectors. She is the author of several books on Middle East society, including My House in Damascus: An Inside View of the Syrian Crisis (2016) and The Merchant of Syria (2018), a socio-economic history. 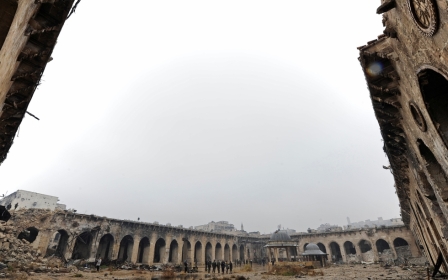 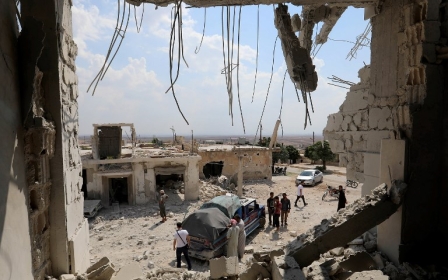 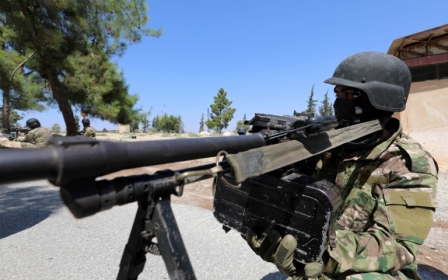