The myth of the Israeli nuclear deterrent

Hamid Dabashi
Israel could not drop a nuclear bomb in the region without endangering itself. This charade is a distraction from the real issue of colonial land theft 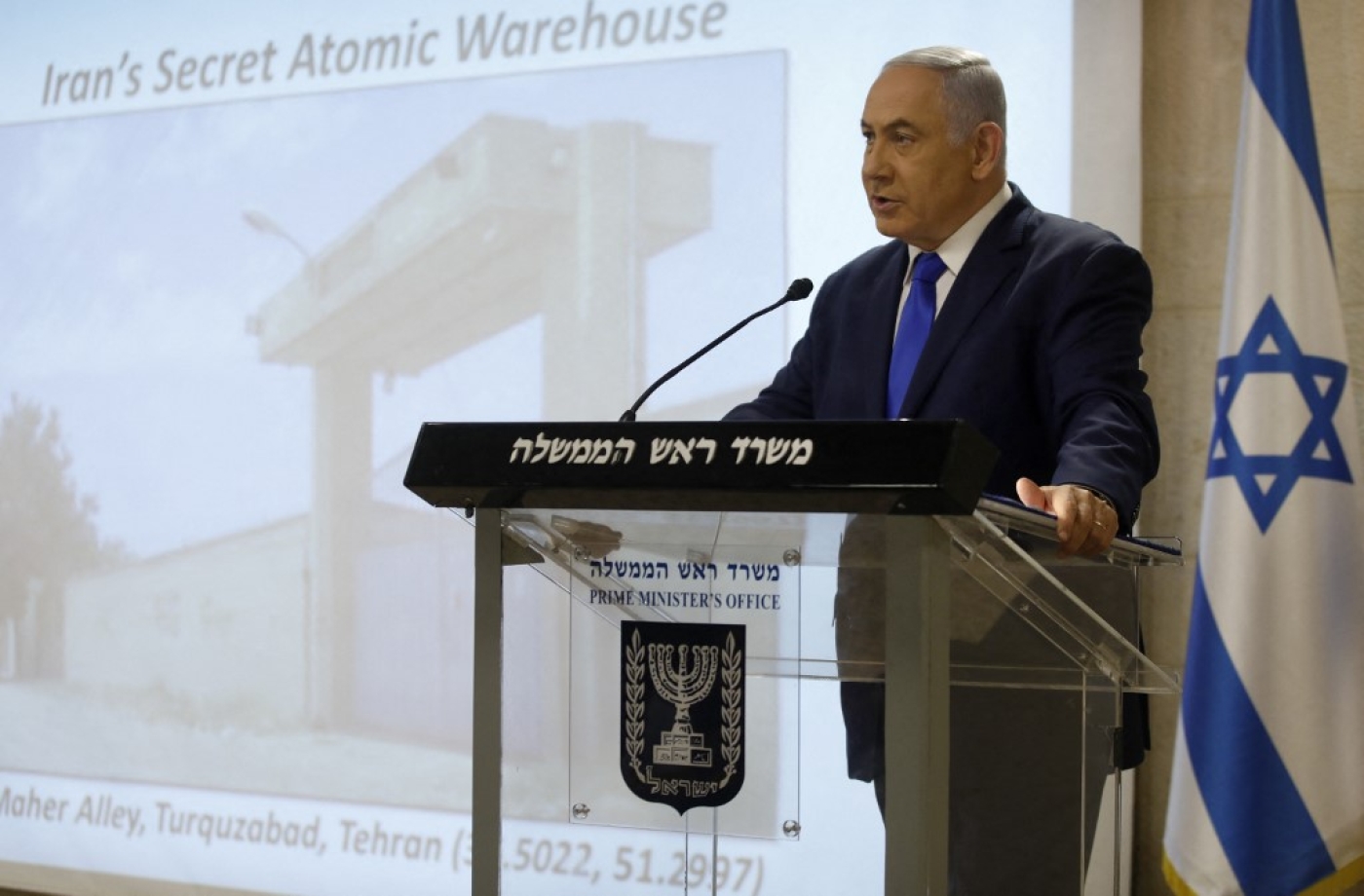 Once again, the prospect of a nuclear deal with Iran has mobilised Zionists from Tel Aviv to Washington, in an effort to sustain the manufactured idea of Iran as the number one enemy of world peace.

The ruling Iranian regime is not exactly God’s gift to humanity, but for all its atrocities, it is part of a larger regional jigsaw puzzle of atrocities, in which Saudi Arabia, the UAE, Israel, Europe, the US, Russia and even China have each had a role to play.

Whatever is happening in Iran, it is one group of Iranians ruling over others; it is not a regime of European settler colonialists occupying another people’s homeland.

The resumption of cat-and-mouse negotiations between the US and Iran over the dismantled nuclear deal has once again brought the big, awkward elephant in the room to global attention.

No amount of barefaced Israeli hasbara can cover up the outsized Israeli nuclear arsenal staring the world in the face, while its propaganda officers led by AIPAC and other Zionist outfits in the US and Europe push for continued crippling economic sanctions on more than 80 million Iranians to punish their rulers - reason and sanity be damned.

The result is a foregone conclusion: the Iranian regime becomes more belligerent with each round of sanctions, as the multitude of people they rule become more desperate - victims of both their own ruling state, and of the Saudi-Israel alliance and their lobbies in Europe and the US.

But the elephant in the room demands attention. Israel has an arsenal of nuclear and other weapons of mass destruction, which it has either used or threatens to use to protect its garrison state.

Iran does not have a nuclear bomb, and it is a signatory to the nuclear Non-Proliferation Treaty. Successive US administrations, either committed Zionists or frightened out of their wits by the Zionists, pretend they are dumb, deaf and blind to these simple facts.

The Israeli nuclear deterrent is a bluff, and countries in the region should call that bluff

Iran should never have a nuclear bomb, nor should Israel or any other state. We need a nuclear-free world and nuclear-free regions - especially those regions where a European settler-colony has become the conduit for facilitating the imperial interests of the US and its allies.

Everything about the Israeli nuclear arsenal works through sophistry, cheating and fraudulence. According to the Center for Arms Control and Non-Proliferation, “in a July 1969 declassified memo to President Richard Nixon, Secretary of State Henry Kissinger made clear that when buying the United States’ Phantom aircraft, Israel committed ‘not to be the first to introduce nuclear weapons into the Near East.’ However, it is now thought that Israel interpreted ‘introduce’ to mean that ‘they [Israel] could possess nuclear weapons as long as they did not test, deploy, or make them public.’”

One simple word - “introduce” - is twisted to disguise the fact that Israel's commitment not to be the first nuclear weapons state in the Middle East was worthless.

According to the Nuclear Threat Initiative: “Situated in a high conflict region, Israel possesses advanced conventional military capabilities, and has for decades maintained a policy of opacity … regarding its WMD programs. While experts generally agree that Israel possesses nuclear weapons, no such current open-source consensus exists on the status of Israel’s offensive chemical or biological weapons programs.”

This is a tautology. Of course Israel is situated in a high-conflict region; it is a key reason for that very condition. This does not mean that Iran, Saudi Arabia, Syria or any other regional country is an embodiment of peace and equanimity, but the settler-colony is what it is: a garrison state created by Europeans and sustained by Americans to protect and facilitate their own nefarious interests.

The supreme hypocrisy of Israel’s US and European sponsors is not a secret. As Julian Borger put it in the Guardian in 2014: “Israel has been stealing nuclear secrets and covertly making bombs since the 1950s. And western governments, including Britain and the US, turn a blind eye. But how can we expect Iran to curb its nuclear ambitions if the Israelis won’t come clean?”

The fact that Israel commands a nuclear arsenal is not a state secret. According to the Federation of American Scientists, nine countries possess nuclear weapons: the UK, China, France, the US, Russia, India, Pakistan, Israel and North Korea. The UK and France fear Russia, while China, Russia and the US aim for world domination. India and Pakistan fear each other, while North Korea is protecting itself against the US.

But what about Israel? What does it have to do with anything? Where exactly is its enemy? Palestinians are living in its midst. Are Israel’s atom bombs intended for Egypt, Syria, Turkey or Iran? How many millions do they want to murder to divert attention from the real issue: theft of Palestinian land? It’s a sham, unless we look at the myth of their nuclear “deterrent” in an entirely different light.

With the truth of Israel’s nuclear bombs known globally, its nuclear arsenal is projected as a “deterrent” for self-preservation. But in fact, the Israeli nuclear arsenal is not a deterrent to anyone in its vicinity, because it could not drop a nuclear bomb in the region without endangering itself. Still, the possession of the nuclear bomb gives an aura of indestructibility to Israel, which it uses to intimidate demented Arab leaders into disregarding its theft of Palestine. It is thus the threat, not the imminent likelihood, of a nuclear strike that works to Israel’s advantage. Both Israel and Iran are fully aware of this bogus threat; the game they play is a smokescreen for something else.

By manufacturing Iran as its No 1 enemy, Israel camouflages the Palestinian issue. By engaging in that charade, Iran justifies advancing its regional rivalry with Saudi Arabia.

The Israeli nuclear deterrent is a bluff, and countries in the region should call that bluff. Yes, Israel has the nuclear bombs it does not want others to have, but they are useless bombs that deter nothing and nobody. Israel could not drop them on Damascus, Beirut, Baghdad, Tehran or Cairo without causing a regional and environmental calamity that would endanger its own inhabitants.

Israel is aiming to distract attention from its real existential threat: the fact of Palestinian national self-determination, which it cannot deny, dismiss or resolve.

The US, Israel, and their Arab and European allies are not in a position to point fingers or cast the first stone

To justify the supreme hypocrisy of the US and EU, American and Israeli analysts come up with tall tales of how the US initially opposed, France enabled, and then the US reluctantly yielded to the Israeli bomb. These are all long and silly tales to do precisely that: justify supreme hypocrisy.

The US and its European allies are the sole beneficiaries of Israel’s nuclear arsenal. It is entirely useless against Palestinians, and even against other Arab countries or Iran. It is, first and foremost, useful to the US in its global configuration of military bases.

Iran should never have a nuclear bomb - but the US, Israel, and their Arab and European allies are not in a position to point fingers or cast the first stone.