Netanyahu vs. Abu Ubaydah: On victory and false victory

Ramzy Baroud
Netanyahu is twisting language and stretching the truth in a despondent attempt to score a political victory, or to simply save face, but few are convinced 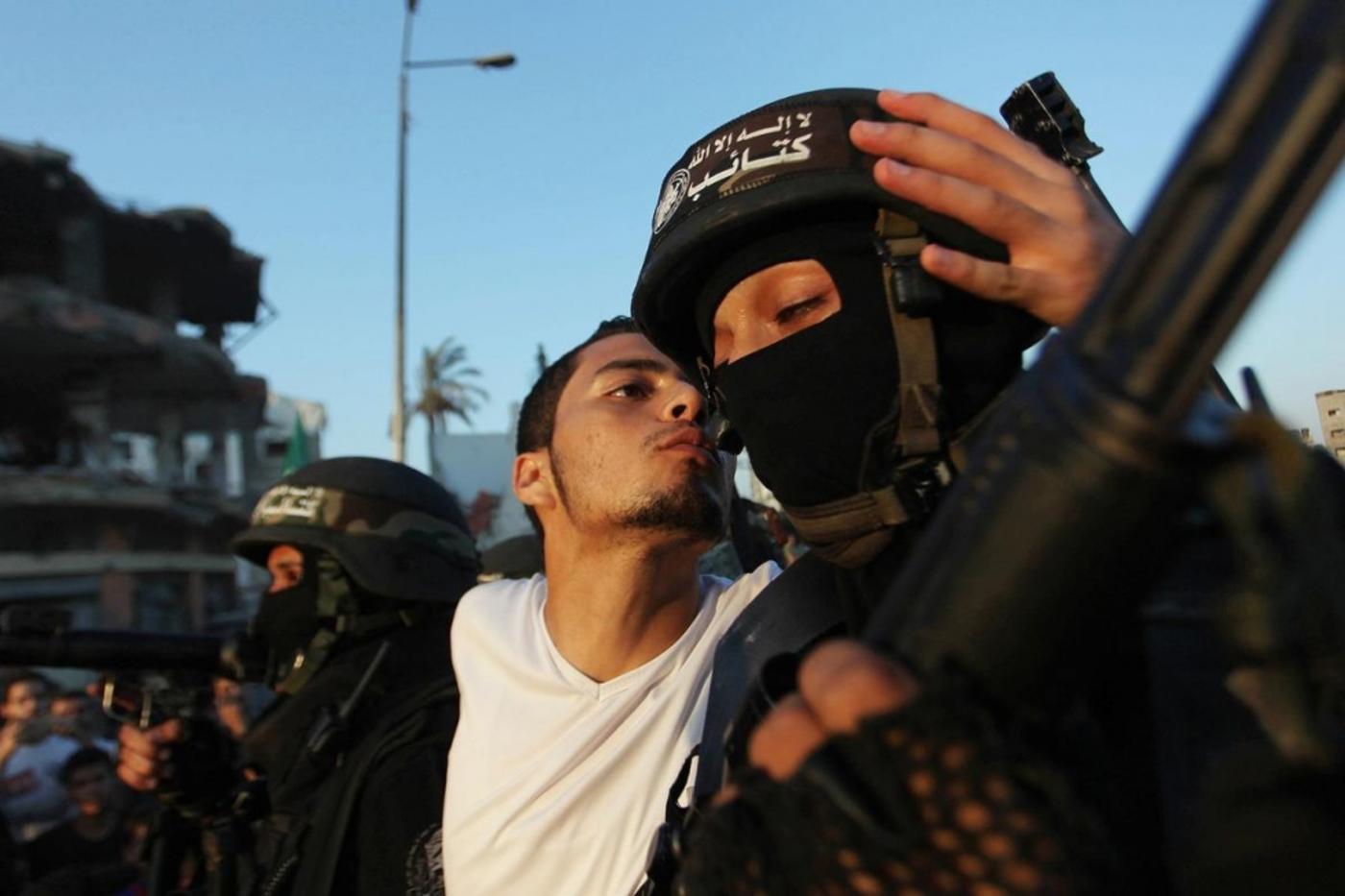 In the rush to analyze the outcome of Israel’s 51-day war in Gaza, dubbed Operation Protective Edge, some may have neglected an important factor: this was not a war by traditional definitions of warfare, thus the conventional analyses of victory and defeat is simply not applicable.

That being the case, how can we explain Israeli Prime Minister Benjamin Netanyahu’s triumphant statement on 28 August, and the massive celebrations on the streets of Gaza regarding the resistance ‘victory’ over Israel? To be truly fathomed, they must be understood in context.

Soon after the ceasefire declaration on 26 August, ending Israel’s most destructive war on Gaza yet, Netanyahu seemed to have disappeared from the scene. Some Israeli media began predicting the end of his political reign. Although this notion was a bit hasty, one can understand why. Much of the man’s political career was predicated on his ‘anti-terror’ stance and Israeli security agenda.

He served as prime minister from 1996 to 1999, with the decided aim of defeating the Oslo ‘peace process.’ He argued it compromised Israel’s security. Then as a finance minister in Sharon’s government (2003-05), he was troubled by Ariel Sharon’s intentions regarding re-deploying out of Gaza. In fact, it was the Gaza ‘disengagement plan’ that ended the Netanyahu-Sharon alliance.

It took Netanyahu a few years to fight his way back from the seeming oblivion in Israel’s complicated political landscape. He fought a grueling political battle, but managed to redeem only some of the rightwing Likud party’s past glory through fractious alliances. He served as prime minister from 2009-2013, and for a third term (a rarity in Israeli history) from 2013 to the present.

Not only was Netanyahu the king of Israel, but its kingmaker as well. He did keep his friends close and enemies closer, and cleverly balanced out seemingly impossible coalition odds. He succeeded, not simply because he is a shrewd politician, but also because he managed to unite Israel around one goal: security. This he did by fighting “Palestinian terror,” a reference to various Palestinian resistance groups, including Hamas, and building Israeli defenses. He had such command over that political discourse that no one came even close, surly not the newcomer centralist politician Yair Lapid, or even rightwing and far-right hawks Avigdor Liberman and Neftali Bennet.

But then, Gaza happened, a war that could possibly become Netanyahu’s biggest miscalculation, and perhaps the reason for his downfall. Aside from the collapse in his approval ratings, down from 82% on 23 July, to less than 38% shortly after the ceasefire announcement, the man’s own language in his post-ceasefire press conference is telling enough.

He seemed desperate and defensive, arguing that Hamas failed to achieve its war objective, although it was Israel, not Hamas, that instigated the war with a list of objectives - none of which were achieved anyway. Hamas responded by mocking his statement as the group didn’t start the war, nor had any demands then, a group official told Al Jazeera. The demands were made in the subsequent ceasefire talks in Egypt, and some of them were in fact achieved.

Netanyahu is twisting language and stretching the truth in a despondent attempt to score a political victory, or to simply save face. But few are convinced.

Writing in Foreign Policy on 20 July 20, Ariel Ilan Roth came to an early conclusion about the Gaza war, which has proven to be only partly true. “No matter how and when the conflict between Hamas and Israel ends, two things are certain. The first is that Israel will be able to claim a tactical victory. The second is that it will have suffered a strategic defeat.”

Wrong. Even the tactical victory was denied this time around, unlike previous wars, most notably the so-called Operation Cast Lead (2008-09). The Gaza resistance must have learned from its past mistakes, managing to withstand a 51-day war with a destructive outcome unprecedented in all past Gaza conflicts. When the Egypt-mediated ceasefire was announced, every Israeli soldier was pushed behind Gaza’s borders.

Almost immediately after the agreement, a Hamas official from Gaza read a statement in which he called on Israelis living in the many evacuated border towns to return to their homes, in a statement of defiance also unprecedented. Shortly after, hundreds of fighters representing all factions, Fatah included, stood at the ruins of  the Shejaiya, neighbourhood in Gaza city. “There is no room amongst us for that defeated, weak Arab,” the military leader of the Gaza resistance Abu Ubaydah declared, as throngs of people showered the fighters with kisses.

He too declared some kind of victory. But is his “victory” statement any different from that of Netanyahu’s?

“Israel has a history of claiming victory when in fact it has suffered defeat; the October 1973 war is the best example,” wrote Roth in Foreign Policy. The difference back then is that many in Israel accepted false victories. This time around they refuse to do so, as various opinion polls by Haaretz, Channel 2 and others are showing. Furthermore, the chasm in Israel’s political class is wider than it has been in many years.

Irrespective of this, ‘victory’ of the resistance cannot be understood within the same context of Israel’s own definition of victory, or false victory. Surely the resistance “was able to establish deterrence, displaying an incredible level of resilience and strength, even when equipped with primitive weapons,” as argued by Samah Sabawi. The very idea that powerful Israel, and the likes of Netanyahu, can use Palestinians as a testing ground for weapons or to enhance approval ratings seems to be over. The Sharon old wisdom that the Arabs and Palestinians “must be hit hard” and “must be beaten,” as a precondition for calm, or peace, was challenged like never before in the history of Arab-Israeli wars.

Gaza’s ceasefire “celebrations” were not the kind of celebrations that would follow a football match win. To comprehend it as an expression of mere joy is a mistake, and reflects a lack of understanding of Gaza society. It was more of a collective statement by people who lost 2,143 people, mostly civilians, and have over 11,000 wounded and maimed to care for. Let alone the total or partial destruction of 18,000 homes, 75 schools, many hospitals, mosques, and hundreds of factories and shops.

No, it was not a statement of defiance in the symbolic sense either. It was a message to Israel that the resistance has matured and that Israel’s complete dominance over when wars start and how they end is over.

Only the future could prove how accurate such an assessment is and how consequential it will be for the West Bank and East Jerusalem, which are under military occupation. Interestingly, “liberating Jerusalem,” was in fact a dominant theme among jubilant Palestinians in Gaza. Another theme was the insistence of national unity among all Palestinians. After all, this was the real reason why Netanyahu had launched his war on Gaza in the first place.

Resistance discourse, al-Muqawama, is now the most dominant in Palestine, and it goes beyond factional divides, or the tired discussion about useless ‘peace talks’ that garnered nothing for Palestinians but territorial loss, political division and much humiliation. That sentiment is already reverberating in the West Bank. But how it will be translated in the future is yet to be seen, considering the fact that the Palestinian Authority (PA) there is weak in its dealings with Israel, and very intolerant of any political dissent.

Israeli pressure on PA President Mahmoud Abbas will continue. In his first press conference after the ceasefire Netanyahu repeated the same ultimatum. Abbas “needs to choose what side he is on,” he said.

After failing to end the Gaza resistance, Netanyahu is left with nothing other than pressuring Abbas, 79, whose choice, after Gaza’s war, means so little to begin with.

Photo: A Palestinian reacts during a press statement of Ezzeddin al-Qassam Brigades, the armed wing of Hamas, in the Shejaiya neighborhood in Gaza 27 August (AA) 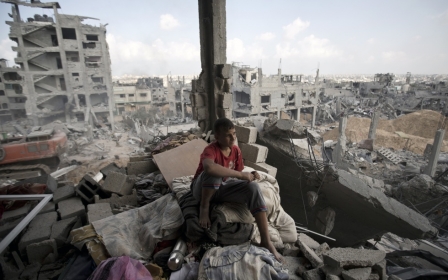