Meron Rapoport
In a desperate attempt to prevent his own indictment, Netanyahu resurrected the radical right rhetoric that elected him 20 years ago. Grievous consequences are liable to ensue 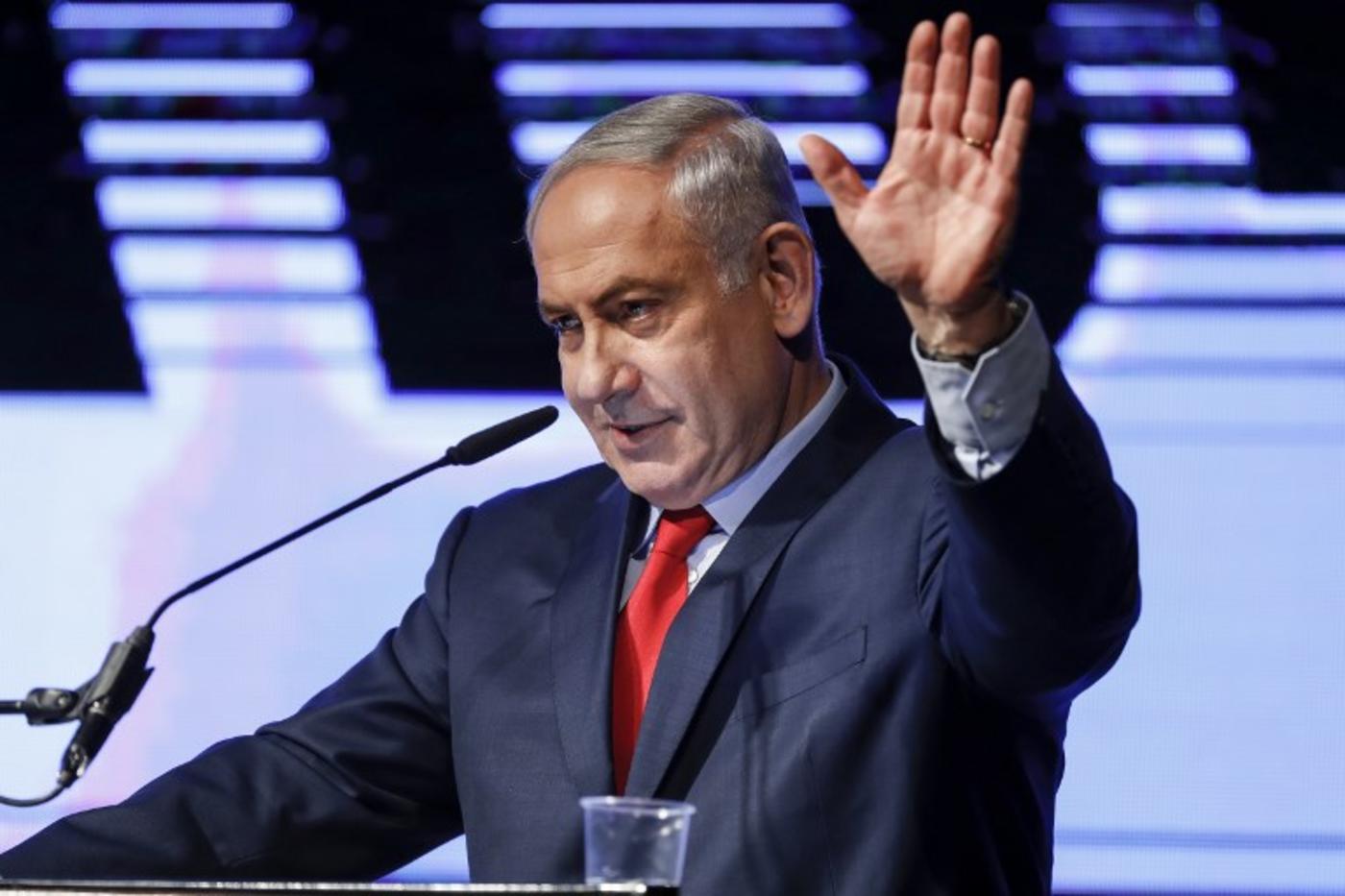 If the goal of Benjamin Netanyahu's speech to some 3,000 enthused Likud activists this week was to stop the criminal proceedings against him, its success appears doubtful. In all likelihood, the prime minister will be indicted in the coming months.

But if the idea was to signal to the Israeli public that his battle to hang on to his office will be ugly and possibly violent, the speech certainly achieved its purpose.

In all likelihood, the prime minister will be indicted in the coming months

Investigations into Netanyahu have been ongoing since the beginning of the year. There are three main cases. In two of them, he is suspected of being directly involved, and in the third – which is more serious from both a criminal and a public standpoint – he has yet to be interrogated, but several of the figures closest to him are deeply involved.

In the first case, Netanyahu is suspected of having failed to report hundreds of thousands of shekels worth of gifts – mainly cigars and champagne – received from business figures close to him. In that affair, the facts are essentially undisputed. Rather, the key question is the degree to which Netanyahu and his wife, Sara, took the initiative in order to receive the gifts and whether or not there was any kind of quid pro quo promised or bestowed by Netanyahu.

The second affair has to do with meetings Netanyahu had with Arnon Mozes, publisher of Yedioth Ahronoth, Israel’s second largest newspaper. Yedioth has historically been considered hostile to Netanyahu. Recordings obtained by the police show that Netanyahu and Mozes discussed a deal: instead of attacking Netanyahu, the paper would give him more favourable coverage and, in exchange, Netanyahu would use his influence on Yedioth’s biggest rival, Israel Today, to reduce its fierce competition with Mozes’ paper.

The very fact of a major newspaper publisher and a prime minister discussing favourable coverage in exchange for financial favours is instructive as to the troubling condition of both democracy and media in Israel, but less clear is whether the state prosecutor can prove that such talk constitutes bribery.

A hedonist and a victim

But what was clear is that although Netanyahu was interrogated several times regarding these two cases - and there were even public statements to the effect that an indictment would be forthcoming in one or both of them - most of Netanyahu’s voters have not viewed these affairs as egregious enough to warrant ousting him from office.

In the gifts case, he is perceived as a hedonist but not as a criminal, while in the Yedioth case, Netanyahu is seen as a victim, extorted by a newspaper that for the past several decades has been associated with the old establishment so loathed by the right wing.

In a country where anything security-related is a sacred cow, this kind of affair could potentially cause an earthquake

The third case is more complicated and has much broader implications. This affair centres on the suspicion that the German maritime company ThyssenKrupp used an Israeli businessman as intermediary to bribe senior Israeli military and political figures to enable it to secure Israel’s order of submarines and other vessels worth billions of dollars. In a country where anything security-related is a sacred cow, this kind of affair could potentially cause an earthquake.

Netanyahu has yet to be interrogated in this case, but the fact that David Shimron, his cousin and confidential emissary for political matters, was the legal representative of the German shipbuilder in Israel, establishes a connection between this dubious deal and the prime minister.

If we add to that the fact that Netanyahu, atypically, ignored the Defence Ministry’s opposition to the deal and instead proceeded to energetically promote it, then the question marks around the involvement of the prime minister are, inevitably, proliferating.

Netanyahu, as noted, has thus far managed to keep his distance from the criminal investigation into the submarine affair, but in the past few weeks there has been a significant shift.

Mickey Ganor, an Israeli businessman who allegedly conveyed the bribe to senior Israeli figures, has agreed to be a witness for the state. His testimony is under a gag order so far, but  what is known already would appear to greatly reinforce the suspicions against Shimron, Netanyahu’s cousin, who was supposed to receive millions of dollars for closing the deal.

Either Netanyahu allowed a huge, corrupt deal involving his cousin and sometime emissary to take place right under his nose without his notice, or else he was involved in this deal in one way or another

Ganor reportedly told his interrogators that “everything Shimron promised me, happened”. Since Shimron is a private lawyer, it’s hard to understand how he was able to alter Israel’s official position on a transaction as sensitive and costly as the submarine deal without reference to his close personal ties to Netanyahu.

If these things are proven, two possibilities will confront us: either Netanyahu allowed a huge and corrupt deal involving his cousin and sometime emissary to take place right under his nose without his notice, or else he was involved in this deal in one way or another. Neither possibility bodes well for him.

The most serious blow, however, was landed at the beginning of this week. The police announced that Ari Harow, Netanyahu's former chief of staff who is considered one of his closest confidantes, will also serve as a witness for the state. His testimony is likewise under gag order, but is known to involve both the gifts and Yedioth Ahronoth affairs, the two cases in which Netanyahu is the primary suspect. A recent document submitted to the court by the state prosecutor in this case employs the term bribery for the first time.

It is difficult to see how Netanyahu could evade indictment if Harow does give evidence against him. The statistics in Israel say that 90 percent of the cases in which the state prosecutor have state witnesses end with a conviction. Netanyahu is certainly familiar with this fact.

Even if the investigation unfolds over another several months, he has very good reason to suppose that it will end with his indictment. And although the law does not explicitly require a prime minister or cabinet minister to resign if indicted, thus far every minister on finding himself in this type of situation, including then prime minister Ehud Olmert, has resigned.

This is not how Netanyahu – believing himself to be the only person capable of saving the state of Israel from all the dangers threatening it, most notably the potential emergence of a Palestinian state in the West Bank and Gaza – would wish to end his political career.

Like every other politician, for Netanyahu, this struggle is personal. But there is no reason to doubt that Netanyahu believes that the survival of the state of Israel depends on his own personal survival and his continuing on as prime minister.

This is the backdrop to the passionate, some would say hysterical, speech that he gave this Wednesday in which he argued that the investigations aimed to prompt a “coup” against his government. For Netanyahu, this language is not new.

Twenty years ago when he first entered politics, he talked that way - of a frontal assault against the “elites” in the media, the judicial system, and even the defence establishment, along with vitriolic incitement against the left in general and the Palestinian minority within Israel in particular.

Netanyahu knows that this is playing with fire. This language put him in power in the elections of 1996, but also brought about his defeat in the elections of 1999 against Ehud Barak. In his last three administrations, he has tried to position himself in a more central place in Israeli society, but the immediate threat to his regime has prompted a reprise of those early tactics.

This reprise also involves reinforcing the alliance with the more radical segments of the Israeli right-wing. When he presents himself as the last bastion preventing the establishment of a Palestinian state, as he did in this most recent speech, he reaps almost automatic support in those circles.

So it’s quite reasonable to think that Netanyahu’s renewed alliance with the far right will be manifested in even more draconian legislation against the Palestinian minority in Israel, such as the “Nationality Law” now under discussion, or the laws that restrict the democratic space – like the ones against non-governmental organisations that have already been passed during the tenure of this administration.

It is doubtful that Netanyahu is planning military action against Hamas or perhaps Hezbollah, as some commentators on the left have suggested. Compared with the centre-left government of Olmert, which during the first year of his administration conducted two military campaigns in Lebanon and Gaza in which thousands of Lebanese and Palestinians were killed along with about 200 Israelis, the last 12 years under Netanyahu have been relatively calm, apart from the lethal Operation Protective Edge three years ago. But heating up the rhetoric against the Palestinians is liable to lead to unforeseen consequences.

Describing the investigations of Netanyahu by the police and the state prosecutor as an attempted coup is one more in a series of confrontations between the current Israeli political leadership and state institutions.

Repeated attempts to constrict the authority of the country’s highest court on the one hand, and the open confrontation by the government with the Shin Bet and the army over the metal detectors at the entrances to Al-Aqsa on the other, are both good examples of the increasing tension.

Such tension also characterises relations between US President Donald Trump and the network of institutions known as the 'Deep State' in the US, like the CIA, FBI, Supreme Court and others. Netanyahu is definitely heading in that direction. But in a country like Israel, where doubt is cast on the legitimacy of these institutions to begin with, a process like this could produce catastrophic results. It could bring Israel closer to the kind of situation in which Turkey, for instance, now finds itself under Recep Tayyip Erdogan.

If Netanyahu is unable to escape being indicted, that will be, in practical terms, the likely legacy of his regime. There will also be an impact on whoever his successor will be. One may reasonably suppose, if Netanyahu resigns and the right-wing wins the next election, that the next government will be chosen for its anti-democratic platform – like the one outlined by Netanyahu in his most recent speech. That could prove to be the real danger.

Photo: Israeli Prime Minister Benjamin Netanyahu delivers a speech during a gathering by Likud party members and activists at the Tel Aviv Convention Center on 9 August 2017 in a mass show of support for the PM who is facing a string of corruption investigations (AFP)