Never mind Russia, the UAE has united with AIPAC to capture Washington 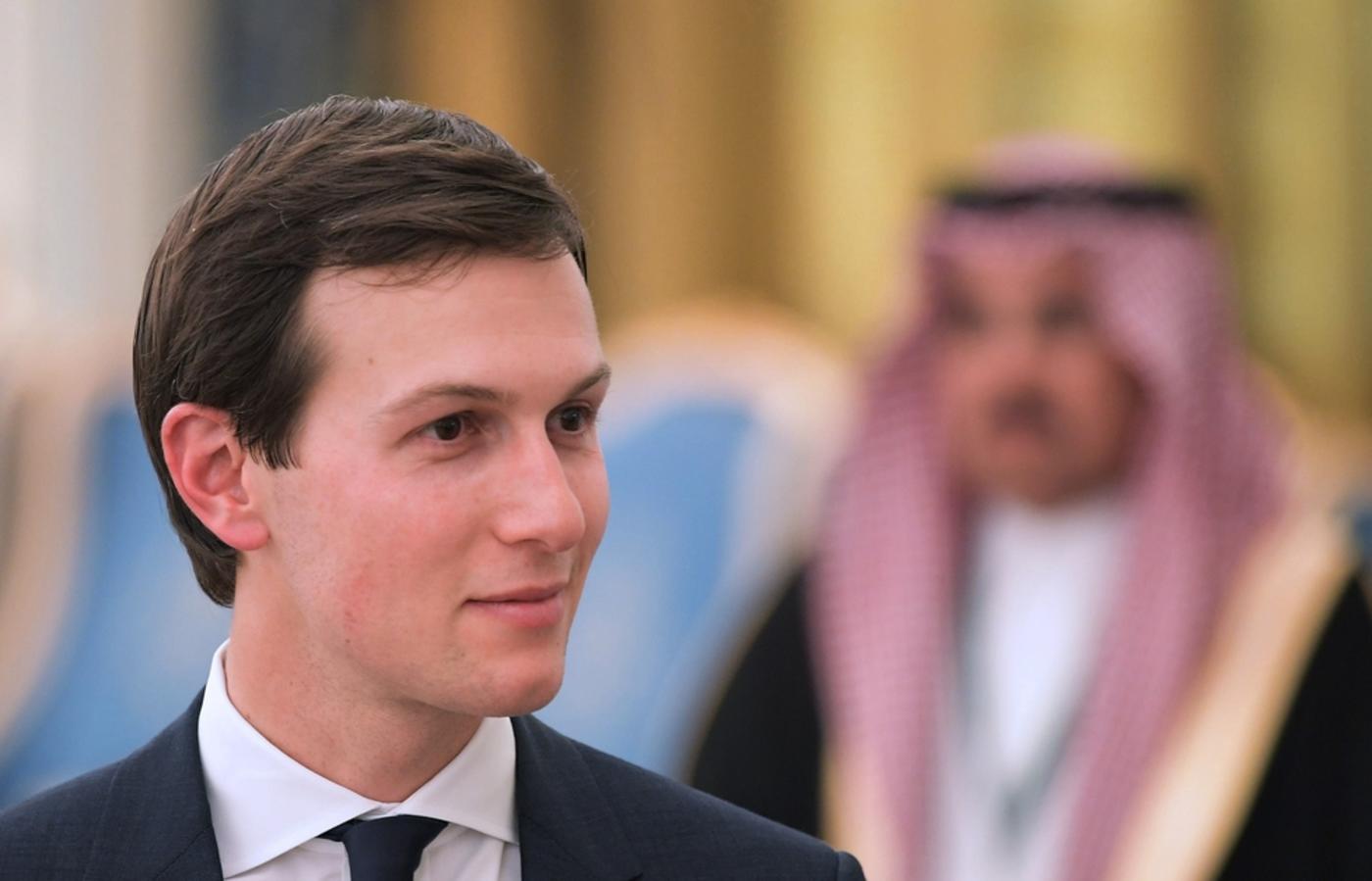 Amid the obsessive coverage of Russia's alleged meddling in the 2016 US presidential election, the exertion of influence by one Middle Eastern player over Washington's neoconservative circles in general, and the Trump White House in particular, has somewhat evaded public attention.

While there is extensive debate about the 2018 conference of the pro-Israel lobby group AIPAC, the influencing activities of the United Arab Emirates in the United States over the past decade have gone widely unnoticed.

In fact, as the widening of the investigation led by US Special Counsel Robert Mueller indicates, the Emirates might have developed into the most powerful influencer on Middle East policy in Washington – on par with AIPAC.

In a more subtle way, Abu Dhabi has created a powerful web of policymakers, think tanks, experts and social media trolls in the United States, which in many ways emulates the messaging of the pro-Israel lobby.

The Emirati strategy to buy influence in Washington emerged in 2008, after the Dubai Ports World debacle, when senior US policymakers objected to the takeover of major US ports by a company based in the UAE. In response to the controversy, the Emirates were eager to emerge from the largely negative image of being "just another Middle Eastern country".

Under the direct patronage of Emirati Crown Prince Mohammad bin Zayed, Yousef al-Oteiba, the now-infamous and then-new Emirati ambassador to the US, was entrusted with the task of creating a new narrative about the Emirates as a tolerant Middle Eastern partner that shares US security concerns.

The widely inexperienced Trump campaign, drenched in neo-conservative ideology and subscribing to terrorist fear-mongering, was highly susceptible to the advances made by the Emirates

The fact that this narrative was most recently echoed by AIPAC speakers should not come as a surprise. Otaiba consistently invested in the same neoconservative nexus of think-tank expertise and policymaking as the pro-Israel lobby.

The UAE ambassador's extensive network of personal acquaintances on Capitol Hill, in the media and in the think-tank community, allowed him to strategically implant the Emirati narrative into the conservative DC echo chamber.

The Emirati narrative plugged into conservative fears about political Islam and Iran – fears that for decades had been fuelled by AIPAC affiliates. Stoking fears about Islamist and Iranian expansionism, the UAE would present itself as a role model of “liberal authoritarianism” forming a bulwark on these two issues.

Tens of millions of dollars were invested by the UAE to not only buy influence in existing conservative think tanks, such as the Center for Strategic and International Studies, the Atlantic Council or the Middle East Institute, but also to create its own Arab Gulf States Institute. The proximity of think-tankers to Capitol Hill policymakers completed the circle of Emirati outreach infrastructure into the American heart of power.

While Otaiba's mission was initially widely defensive in nature, the beginning of the Arab Spring shifted the Emirati information strategy in DC onto the offensive.

When, in 2011, regime change swept across the region, the Emirati narrative of authoritarian stability came under siege – most importantly from its neighbour Qatar, supporting the people's call for social justice and political pluralism.

The UAE strategically employed its influence infrastructure to not only mobilise narratives against the Obama administration's Middle East policy, but also and foremost to tarnish Qatar's reputation.

The UAE's anti-Qatar messaging became increasingly aggressive after the 2014 Gulf crisis. Its algorithm-empowered army of trolls and bots would disseminate inconclusive and unsubstantiated allegations made by think tanks and experts close to the UAE about Qatar's support for terrorism – a narrative that echoed the simplistic conveyer-belt theory propagated by conservative US think tanks, conflating any form of political Islam with Islamic State-type Salafi-jihadism.

Qatar's humanitarian aid to Hamas in the Gaza Strip was as much framed as support for terrorism as Qatar's backing of political dissidents amid the Arab Spring - a narrative that resonated well with the fear-driven concerns of the pro-Israel nexus.

Fast forward to 2016, when the UAE scented the unique opportunity to expand its reach into the White House. The widely inexperienced Trump campaign, drenched in neo-conservative ideology and subscribing to terrorist fear-mongering, was highly susceptible to the advances made by the Emirates via proxies such as Erik Prince and Elliott Broidy - individuals with deep business ties to the UAE.

In particular, Trump's son-in-law Jared Kushner, close to AIPAC and financially troubled, appeared vulnerable to manipulation after Qatar denied him a financial bailout.

Through targeted messaging, paid expertise, and developed personal and business relations, Abu Dhabi was not only able to dominate the Washington discourse on Middle Eastern affairs, but more importantly to directly shape the Trump administration's initial approach to the Qatar blockade when Kushner became the new president's senior adviser for the region.

Kushner's personal relationship with Emirates strong man, Mohammed Bin Zayed (MBZ), and the UAE lobby, plus his proximity to AIPAC, made him susceptible of the Emirati plan to go ahead with the Qatar blockade. Kushner seemingly was able to undermine the objections to the move by both secretary of state and secretary of defence. The Rose Garden speech by Trump echoed UAE narratives and hand writing.

Despite the Mueller probe into the potential collusion of the Trump campaign with the UAE, this intimately tied web of neocons uniting Israel lobbyists with Arab Gulf state surrogates has created a powerful echo chamber that neither Republicans nor the White House can ignore.

The UAE has created its own informal lobbying machine that, unlike AIPAC, uses the means of fifth-generation information warfare to alter not just the perceptions of policymakers in the US, but the entire direction of American policy towards the Middle East.

Photo: Jared Kushner is seen at the Royal Court after US President Donald Trump received the Order of Abdulaziz al-Saud medal in Riyadh on 20 May, 2017 (AFP). 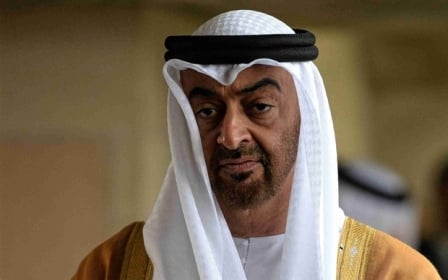 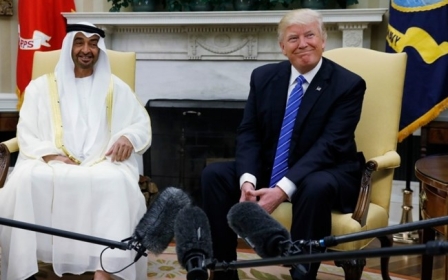 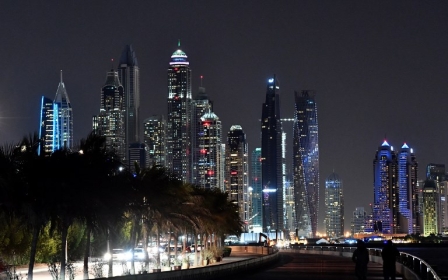