In occupied Palestine, it’s time our language fitted the crime 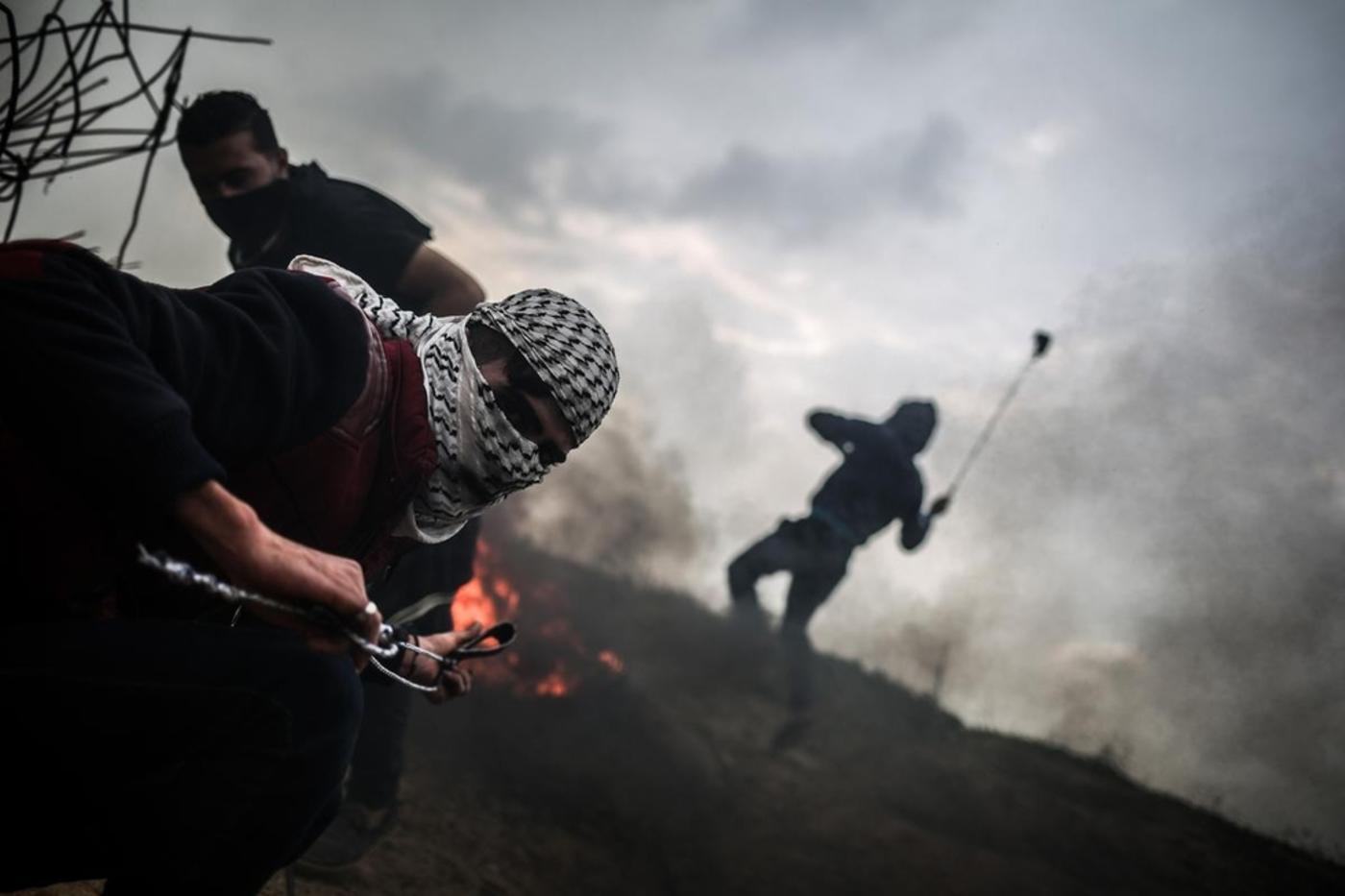 Language can mask all manner of sins. To quote from the authoritative source of Roger “Verbal” Kint - Kevin Spacey’s character in The Usual Suspects: “The greatest trick the devil ever pulled was convincing the world he didn't exist.”

In this case, it seems the devil that doesn’t exist - according to the international media and the UN anyway – is Israel’s criminal collectivity, through which the development of settlements past the 1949 Green Line indicates aggressive colonialist expansion and whose very existence, as argued by eminent Israeli historian Ilan Pappe, is built upon the rubble of ethnic cleansing and the “incremental genocide” of Palestinians.

And how this was made possible? With the complicity of outside observers, who seem to be too afraid to adopt emotive but legally rooted terms such as “colonialism” and “apartheid”, and instead turn to vague euphemisms which obscure human suffering.

It is true that writing on Palestine is an emotionally draining minefield, where the observer must navigate the muddy waters of politicised lexis and baffling semantics. Teetering on the thin knife-edge of objectivity is arduous when dealing with such loaded language: is it “neighbourhood” or “colony”? “security fence” or “Apartheid Wall”?

Palestinian “violence” or “resistance”? In 2013, the linguistic battle was illustrated by the uproar of Google's announcement of the change of its webpage tagline from “Palestinian territories” to “Palestine”.

Only last month when Iberia flight 3316 came in to land at Ben Gurion airport in Tel Aviv, the pilot provoked outrage after announcing the imminent arrival of the aircraft in Palestine, with one passenger indignantly telling Israel’s Channel 2 TV: "We live in the State of Israel, and he should have said 'Israel.’”

As maintained by philosophers such as Michel Foucault, Jacques Derrida and Ferdinand de Saussure, language is not a neutral vehicle of communication, and society is shaped and constructed by linguistics that enshrine and reinforce existing power relationships and imbalances. In this case, Israel is clearly the dominant power, and as such controls the narrative.

As Palestinian novelist Susan Abulhawa recently wrote in an article on Israel’s insidious language of power, “the selection of words [by the colonial settler enterprise] is highly deliberate and meant to construct a moral syntax to contextualise ethnic cleansing and settlement.”

However, the duty to challenge accepted linguistic norms does not just extend to the media, but perhaps more critically to humanitarian officials. They possess the power to establish a tone and precedent to the international community, and are best-placed to enact change.

On 29 October Makarim Wibisono, the UN Special Rapporteur on the situation of human rights in the occupied Palestine territories (OPT), submitted his second report to the UN General Assembly. Seeing as Wibisono was not granted access to the OPT by the Israeli government, the report is based on the evidence of victims, witnesses, NGOs, UN representatives and Palestinian officials interviewed during a visit to Amman last June.

While the report makes significant ground in condemning Israeli abuses which amount to colonialist practice - such as the strategic expansion of settlements in the West Bank, and the objective of achieving a particular demographic balance in Jerusalem – the language used to frame these findings shies away from labelling such policies as crimes against humanity; labels which would be firmly supported by the evidence at hand. Even Wibisono’s title is problematic for many who prefer to use the label of Palestinian “territory” rather than “territories”.

On 3 November, the BADIL Resource Centre for Palestinian Residency and Refugee Rights (BADIL) issued a statement commending the report “for highlighting a wide range of grievous rights abuses perpetrated by Israel throughout the occupied Palestinian territory”. However, BADIL also highlighted the benign language employed by Wibisono that doesn’t seem to adequately place the copious human rights violations in a wider context of systematic abuse and ethnic discrimination.

BADIL firmly states: “If the demonstrably discriminatory and punitive apparatus of a near half century-long belligerent military occupation is to be dismantled, it is essential that our language fits the crime… To borrow rationale from the field of medicine, to devise a cure we must first identify the illness and, to this end, the language used by bodies committed to the protection of human rights inside the OPT is of great importance.”

“In diluting the terminology employed to describe and identify Israeli practices, we mislead and misinform key target audiences… It encourages apathy and acquiescence among members of the international community who are best-placed to protect Palestinians, simultaneously fostering and maintaining an environment of Israeli impunity.”

It seems that international humanitarian actors and media reporters are overly sensitive to appearing to be inflammatory or deliberately provocative, meaning they often employ language that goes too far other way. In a desperate bid to appear objective, they become complicit in the silencing of grave human rights abuses. Thus through the deceptive power of language, Israel’s crimes are hidden in plain sight.

The flexible use of wording in order to camouflage criminality is not new or exclusive to Israel. For example, just look at how the United States initially reported the bombing of the MSF hospital in Kunduz, or how its media agencies substituted the word “torture” for the far more euphemistic “enhanced interrogation techniques” during release of the CIA torture report last year.

However, it seems that the moniker of “Arab-Israeli conflict” to describe hostilities in the Middle East is one of our largest lexical deceptions. For one thing, this problematic term ignores the existence of Palestinian nationalism, but more importantly the word “conflict” suggests an equality of force between two parties; an absurd concept considering Israel has some of the most sophisticated weaponry in the world, while most Palestinian protestors are armed with rocks and slingshots.

Thus, it is imperative that we abandon the term “conflict” in this instance. The problem is perhaps best summarised by Richard Faulk, a professor of international law and the previous Special Rapporteur assigned to the OPT. In 2010, Faulk wrote, “I believe the time has come to call ‘a spade a spade’ and use such terms as ‘annexation,’ ‘ethnic cleansing,’ ‘apartheid,’ ‘colonialist,’ ‘settler colonialism,’ and ‘criminality.’”

“Although admittedly emotive, and requiring a finding by a court of law to be legally conclusive, such robust language, in my view, more accurately describes the unsavoury realities of the occupation at the present time than does the more neutral seeming language beloved by diplomats and welcomed by defenders of the established status quo.”

Taking into consideration the Wall and its accompanying permit system, arbitrary housing demolitions, restricted access to land, and what rights groups such as Amnesty International are labeling as “extra-judicial executions” by the Israeli military, what is unfolding is not a “conflict”, but could instead be argued to be a 21st century equivalent of Jim Crow. Only in the past month, Arab cleaners have been banned from working in Israeli schools in at least four cities, and according to social media, Hebrew University has demanded that all Arab employees wear badges specifying their ethnicity.

“Colonialism”, “apartheid”, and “imperialism” are too often considered as terms that belong to LP Hartley’s foreign country of the past, which have no place in our morally enlightened age where we recognise the ethical imperatives of self-determination.

But perhaps it is time to conquer our aversion of such nomenclature, and the arrogant assumption that it has no place in contemporary geopolitics. For the reluctance of the media and humanitarian officials to employ such “robust language”, as Faulk termed it, is directly contributing to the veiling of Israel’s crimes and the suffering of the Palestinian people.

Now, more than ever, we need our language to fit the crime; for language is power, and that power becomes dangerous when words overtly serve a narrative rather than reflect a reality.

Megan Hanna is an independent freelance journalist and photographer, based in the occupied Palestinian territories. You can follow Megan on twitter via @Megan_Hanna_

Image: A Palestinian youth who protests Israeli government's violations on Jerusalem and West Bank, uses a slingshot to hurl stone at Israeli soldiers during clashes on the Gaza-Israel border south of Al-Bureij refugee camp in Gaza on November 06, 2015. (AFP)