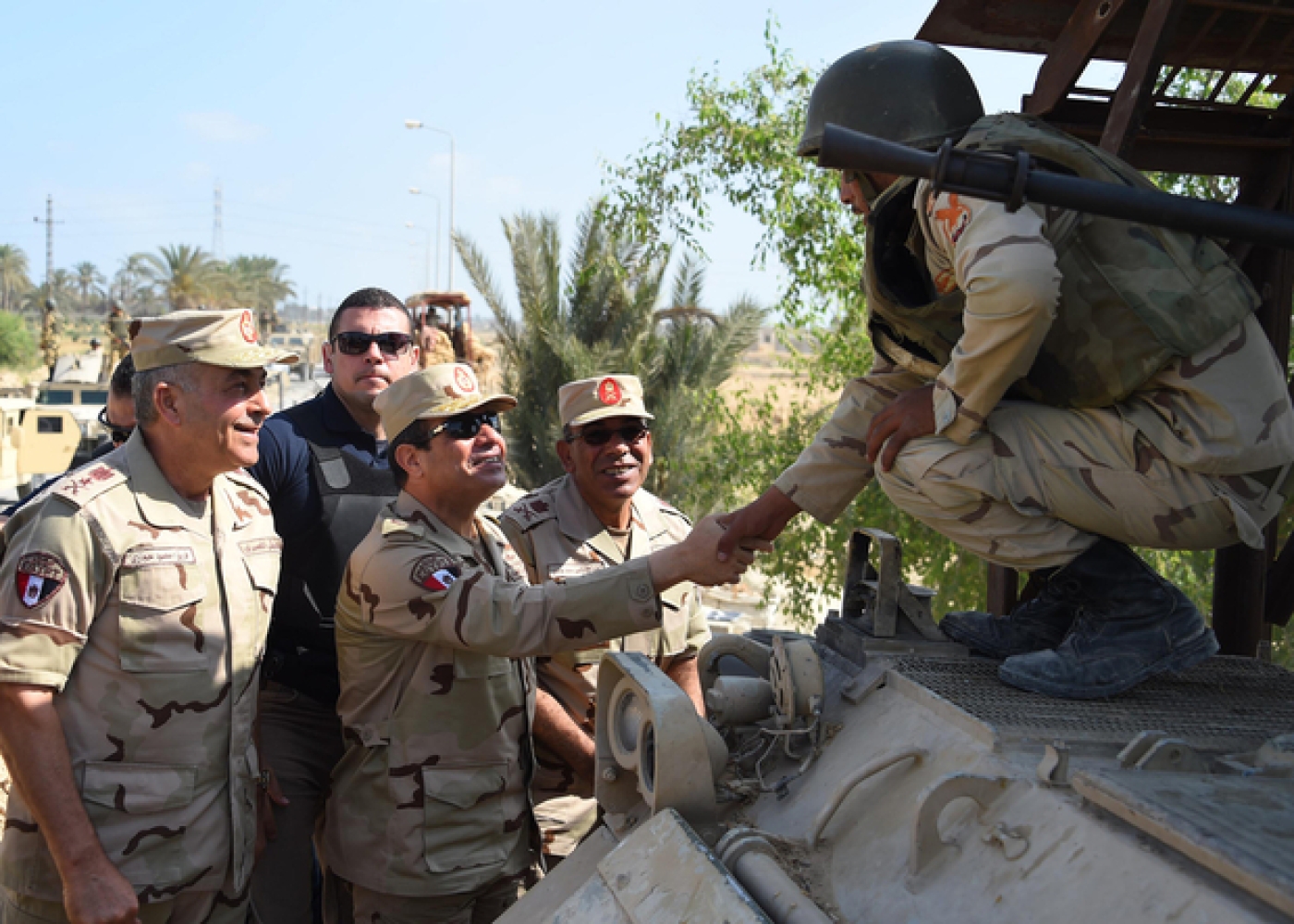 On 7 February, a decree that called for the urgent deployment of medical reinforcements to Sinai and the eastern port city of Ismailia, where hospitals implemented state of emergency measures, was leaked to the media.

The 10-point document, that carried the signatures of high-ranking Ministry of Health officials, requested a series of emergency measures including doubling the number of doctors on shift and ensuring that extra medication and blood bags were available. Such procedures resemble war-time preparations.

What better way to alert terrorists as well as petty criminals that a security sweep is underway than to announce it on state television during peak hours, or drop warning flyers on North Sinai's volatile stretches. That is exactly what happened.

No need for secrecy

This glaring incompetence in handling the military operation secretly - at a time of an ongoing crisis - is not so much due to lack of capabilities. The Egyptian army has two entire branches devoted to ensure the successful implementation of a sudden emergency state: the Military Police Department and the Mobilisation Department, that are powered by tens of thousands of personnel and equipment worth billions of pounds. They should have dealt with such a deployment in secrecy.

The more troubling scenario is that the regime decided to squander national resources, and possibly sacrifice the lives of military personnel and civilians, in a theatrical stunt weeks before the presidential elections

Most importantly, the army enjoys sweeping constitutional and legal powers that allow it to take any measures necessary to launch and execute such states of emergency without the need for any public announcement in advance.

But perhaps the Egyptian regime saw no need to keep the operation, which it described as unmatched in Sinai since 2013, secret.

By the end of the first day of the operation, several sources on the ground in North Sinai confirmed through phone and via-internet conversations that the bombardment almost entirely focused on the villages and suburbs south of the three main cities, El-Arish, Sheikh Zuwayyed and Rafah.

This area has already been turned to rubble after years of bombardment and ground incursions since 2013, while 90 percent of its civilian population has been displaced since 2015 and 2016.

The operation coincided with a visit by Ismail Haniyeh, Hamas's political chief, on 9 February. As Haniyeh was crossing the Rafah Terminal on his way to Cairo, Egypt's fighter jets shook the city of El-Arish with low flyovers bombarding alleged targets mainly south of the city, as well as the area south of Sheikh Zuwayyed and Rafah.

The aerial bombardment was accompanied by heavy artillery from the military encampments on the ground.

The pattern that continued throughout the first two days of the operation posed two worrying scenarios.

The first is that this area has been a terrorist haven, and is, as the military claims, peppered with bunkers and weapon stashes. This means that the military efforts in the past had little to no effect in defeating the Islamic State (IS) branch in the region, known as Wilayat Sinaa, or the Sinai Province.

It also indicates that the military's lack of action in the past had given the terrorists enough freedom to not only prepare, plan and slaughter more than 300 innocent civilians last November, but also to target both the defence and interior ministers with a Kornet missile during a supposedly secret visit in December as they travelled to El-Arish.

Such attacks are unprecedented in the history of Egypt.

The second, and rather more troubling scenario, is that the regime decided to squander national resources and possibly sacrifice the lives of military personnel and civilians, in a theatrical stunt launched weeks before the presidential elections that is scheduled for March 2018.

The operation comes days after an embarrassing New York Times report that exposed details of dozens of Israeli air strikes in the Sinai with an Egyptian blessing and coordination, casting major doubts on Egypt's actual ability to handle its own security issues.

The Sinai operation thus becomes no more than a poorly strategised attempt to save face and gain some popularity for the military's strongman and current president Abdel Fattah Al-Sisi.

"Seriously, if the current military operation did accomplish clear and effective results, why wasn't it launched in the past, instead of all the casualties, military and civilian, over the past years, and while the issue was just limited to Rafah which we could have preserved without displacement and suffering," asked one North Sinai activist in a public post on his social media account.

Another Sinai source described the operation as "having more impact on newspapers than on the ground in Sinai". He spoke on condition of anonymity, fearing that if his identity was revealed the Egyptian authorities won't hesitate to allocate time, resources and personnel to pursue and detain him, regardless of how occupied they might be hunting terrorists.

Meanwhile, and hardly surprising, the North Sinai population continues to pay the heaviest price, suffering under stifling conditions imposed by the army that is ready to spend billions of dollars in military expenditure instead of securing the needs of innocent civilians stranded in a hostile zone for years.

The performance of local authorities wasn't any better than that of the military.

Schools in North Sinai were suspended indefinitely. The military's shutting down of all roads and terminals leading to North Sinai, as well as roads connecting towns and villages, led to a region-wide rush to stock up on essential goods and household requirements, which in turn triggered a wave of inflation in a governorate already suffering shortages in consumer goods and supplies over recent years.

As for traffic, it is slowly reaching a state of paralysis as gas stations were completely shut down on orders of the security authorities. Hossam El-Rifaei, El-Arish's member of parliament and reputable community figure, said on his Facebook page that "coordination is underway to allow some vegetable, food supplies, petrol, gas, and flour [into the city]".

The only positive aspect of the ongoing operation in North Sinai came from the various testimonies confirming the police's surprising - and unusual - decent treatment of civilians as dozens of personnel cordoned entire neighbourhoods and conducted house to house searches in El-Arish and Sheikh Zuwayyed.

However, people remain sceptical and the general feeling of insecurity continues to prevail, despite what seems to be a charm offensive by the police to regain some popularity.

In the past, police authorities would conduct hostile raids, thousands of arrests, and employ torture methods. "The police haven't raided our quarter yet, if you don’t hear from me when networks are back then I am detained," said the unnamed source.

Between the state's total negligence of the traumatised civilians' fears and concerns, and the nationwide hopes that this military operation succeeds in accomplishing an actual and long-lasting triumph against terrorists, the feeling of uncertainty continues to prevail.

- Mohannad Sabry is an Egyptian journalist, expert on security and the Sinai Peninsula, and author of Sinai: Egypt's Linchpin, Gaza's Lifeline, Israel's Nightmare. Sabry has been living in exile since the release of his book in November 2015 and its quick ban in Egypt soon after publication. Sabry was named a finalist of the 2011 Livingston Award for International Reporting, and was among PBS Frontline's team nominated to the Emmy Award for News and Documentary for their 2013 show "Egypt in Crisis".

Photo: Egyptian President Abdel Fattah al-Sisi (C) shaking hands with a member of the security forces during a visit to the Sinai Peninsula on 4 July, 2015 following a wave of deadly attacks on armed forces by militants who pledged allegiance to the Islamic State (AFP)