Three ways to defeat IS in Sinai

Amr Khalifa
The Egyptian government regularly declares that the Sinai militants are on their knees. They aren't. But there are straightforward strategies the state could use to fulfil that prophecy 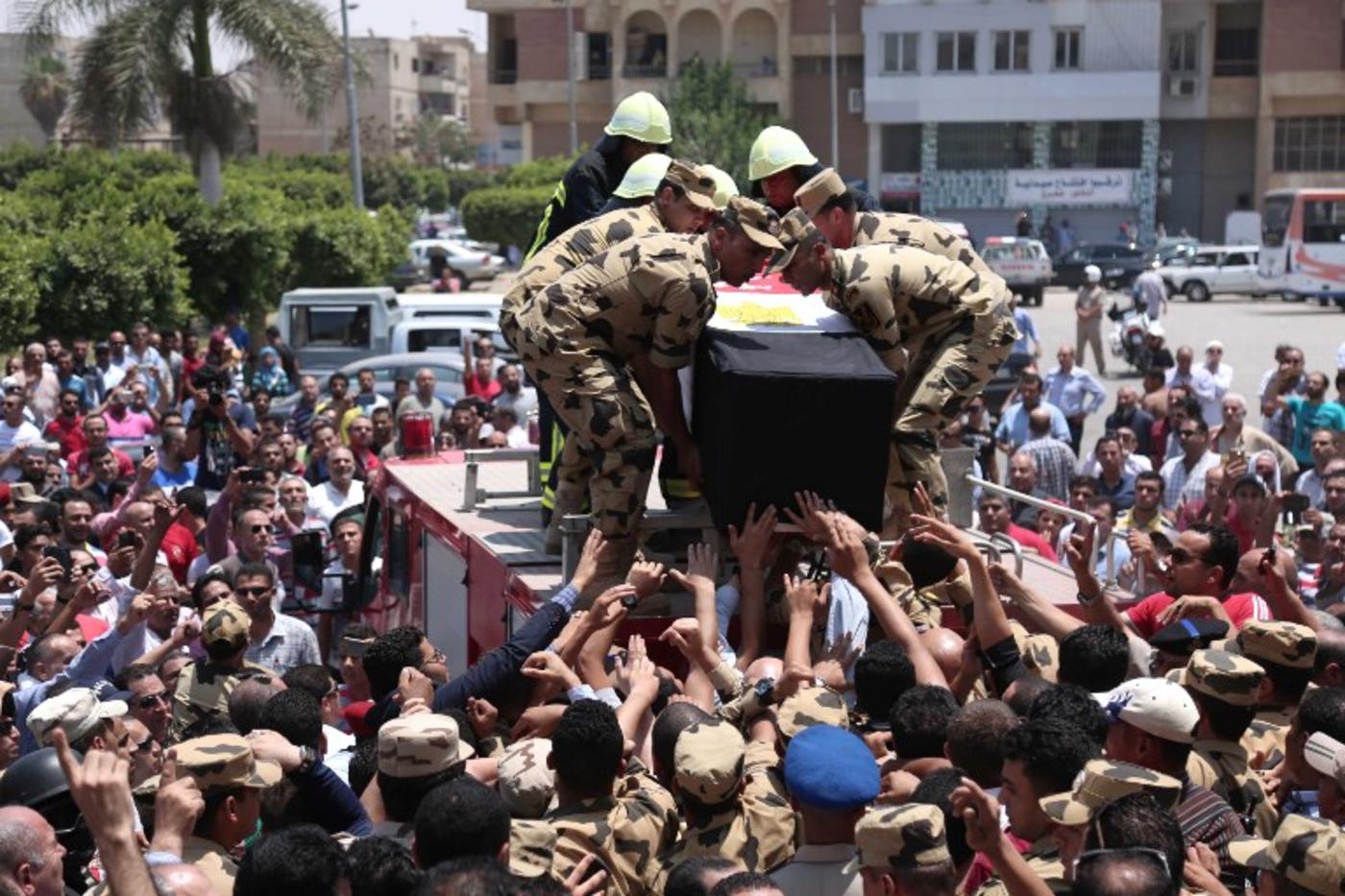 When it comes to the Sinai insurgency, the Egyptian army has had about as much strategic thinking as Abdel Fattah al-Sisi does in his management of the country’s imploding economy.

With more than 50 Egyptian soldiers killed or injured earlier this month in the latest Islamic State (IS) attack, the governing calculus must be revisited.

If I were cynical, I might ask: without monsters such as IS, how else would Sisi justify a seemingly never-ending and failing state of emergency?

Known originally as Ansar Beit al-Maqdis, the group emerged after Hosni Mubarak was ousted among tribes that claimed they had been oppressed by the Egyptian government. Early on, the group focused on attacking Israel and gained notoriety after attacking the Egyptian pipeline exporting gas to Jordan and Israel.

But in recent years, the group has turned its attention to attacking the Egyptian security forces. In November 2014, the group pledged allegiance to IS becoming Wilayat Sinai. For four years now, an insurgency has raged on in Sinai’s northern reaches.

Again and again, the organisation has executed terror acts. Every time a major attack is executed, an effective response is expected, but it never unfolds.

But there are solutions for this insurgency that has, particularly in recent months, surged to the Nile Delta. An eye towards military history, ideology, geography and, above all else, logic is key.

As frequent as a Sahara sunrise, the government declares IS in Sinai to be on the defensive or taking its final breath.

But rather than a string of successes, particularly since the Sisi-led 2013 coup, the pattern has largely been one of escalating terror attacks, both in frequency and in numbers of people killed.

A drop in the number of attacks last year from 225 in the second quarter to 209 in the third quarter, ending with 168 at the end of the year, according to the Tahrir Institute, turned out to be a recalibration of strategy with IS widening the scope of its attacks to focus on triggering sectarian fires with attacks on Egypt’s Christians.

These attacks on Sinai’s Christians started in February in Arish, in northern Sinai and caused thousands to flee while the government was virtually silent.

IS moved on to the Nile Delta with multiple large attacks in April targeting churches in major cities from Alexandria to Tanta, killing over 100 Christians in the process - with one attack, alone, killing over 40.

Israeli intelligence may claim that, with their help including monitoring conversations and the occasional drone, the Egyptian army has had a “series of successes” against the northern Sinai militants.

Yet while the sheer number of attacks decreased in last year’s final quarter, the number of civilians among the 168 killed increased by 107 percent from the previous quarter.

Numbers don’t lie and, faced with this disaster, options are few: cower in fear, continue surface-level solutions which allow for a fleeting narrative of success, or accept responsibility and come up with better solutions. Preferably for Egypt, we take the last option – and, frankly, we should have started yesterday.

Why look at IS in Sinai when terrorism is also striking as far away as both Cairo and Hurghada just days ago? Demonstrably, the centre of the insurgency, one which shows no signs of abating, has been northern Sinai, where the Egyptian army numbers over 20,000.

Militant strikes may be spreading alarmingly to the country’s urban centres, but its chief modality remains the guerilla warfare in Sinai. And to win in Sinai, you must defeat IS on its own turf, using some of its own strategies.

It has been said repeatedly that a conventional army cannot fight non-conventional, non-state actors largely because they have an ability to transition nimbly from a non-armed state to armed readiness at a time and place of their choosing, geographical familiarity and, as locals themselves, can easily dissolve within the population and also garner empathy because they understand grievances.

With these three factors in mind, a better plan of action can be established. Why allow the militants to take the fight to stationary fighting forces? The first step to winning the war against IS involves the mobility of the state’s fighting force.

Not only must checkpoints become mobile to make it impossible for armed locals to orchestrate attacks and garner victories, but simulatenously, the military should use out-of-the-box thinking to set honey traps rather than waiting to be attacked.

Whether it is a checkpoint in Arish, Sheikh Zweid or Rafah, special forces should be employed at staggered parameters of 100, 500 and 1,000 metres from checkpoints, with appropriately sized teams and armaments, and function as a dual protection/attack force for both mobile and stationary checkpoints.

Instead of being ill-equipped and badly trained sitting ducks, the regular forces should work in tandem with highly trained special forces to not only repel, but also chase and decimate terrorist cells. This strategic shift would undercut IS’s ability to surprise conventional forces and potentially begin to turn the military tide.

A daily change of route that military and police forces take will also hinder the effectiveness of the vehicle borne improvised explosive devices (VBIED) and roadside bombs that IS uses.

Winning hearts and minds of the local population would blunt IS’s ability, with its geographical advantage and knowledge, to blend in with Sinai residents. It is crucial that intelligence agencies understand what locals demand and also how IS operates among the people.

In the nearly three years since Wilayat Sinai joined the IS umbrella, it has used a carrot and stick method to great effect. Most only hear of the stick, since journalists aren’t allowed in Sinai, except in rare instances, and government media offers one-sided coverage which spreads propaganda, rather than information.

Egyptians will have read about or seen videos of beheadings and house demolitions carried out by IS in an attempt to scare and control the local population. But many know nothing about how IS compensates locals for the loss of homes that the army has demolished when searching for the militants themselves.

In so doing, the group improves its reputation in the area and takes advantage of the limited local enthusiasm for the army’s haphazard efforts that have resulted in forced evictions and home and job losses as tunnel networks have been destroyed and no-man’s lands created.

IS in Sinai copies social outreach efforts in Syria and Iraq and is not subtle about these efforts so as to leave a lasting imprint, including distributing funds in air mail envelopes clearly market “Islamic State, Wilayat Sinai” and handing out food aid to families and treats to children.

Money talks and IS gets that. Want to gain a foothold in the battle for hearts and minds? The army cannot be perceived as the side that devastates lives, demolishing homes, shutting down schools and killing locals' friends and family.

Local efforts to rebuild schools, create small business training programmes and use gentler treatment at checkpoints will go a long way to reversing losses to an intelligent enemy.

With military victories comes a “widening reach” for IS, including employing its own checkpoints and using "morality police" as enforcers to impede the exploding cigarette smuggling trade.

With mounting losses in Iraq and Syria, the group’s operations and social programmes are now heavily dependent on income from drug trade

Hypocritically, while much of Wilayat Sinai’s financing came early on from IS, with mounting losses in Iraq and Syria, the group’s operations and social programmes are now heavily dependent on income from the drug trade made possible by its “control” of border areas.

In fact, IS is so involved in the drug trade that one of the largest Bedouin tribes in northern Sinai – the Tarabin – have launched a fight against the group and called on other tribes in the area to unite. The Tarabin’s standoff is “not some grand nationalist stand”, Zack Gold, a non-resident fellow at the Atlantic Council told me, but a battle over illicit gains.

Though easier said than done, obliterating IS’s control over these regions will accomplish an all-important goal for the security forces: financial amputation of terror operations.

A strategic shift in force protection and attack operations against a mobile enemy, and a carrot approach with Sinai residents who have only seen the stick and cutting off finances, are all musts - not suggestions.

If the government is serious about defeating IS, the ideas are there. It is the political and military will to implement them which must be found. Thus far, the government’s policy has been: monsters needed, apply within.

If I were cynical, I might ask: without monsters such as IS, how else would Sisi justify a seemingly never-ending and failing state of emergency?

Band aids and a lack of reconfiguration will only increase suspicion about the Cairo regime’s motives.

Photo: A funeral on 8 July for a soldier killed by IS in Sinai the day before (AFP) 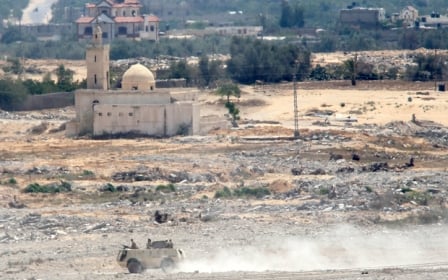