Recognising the right of the Palestinians to surrender 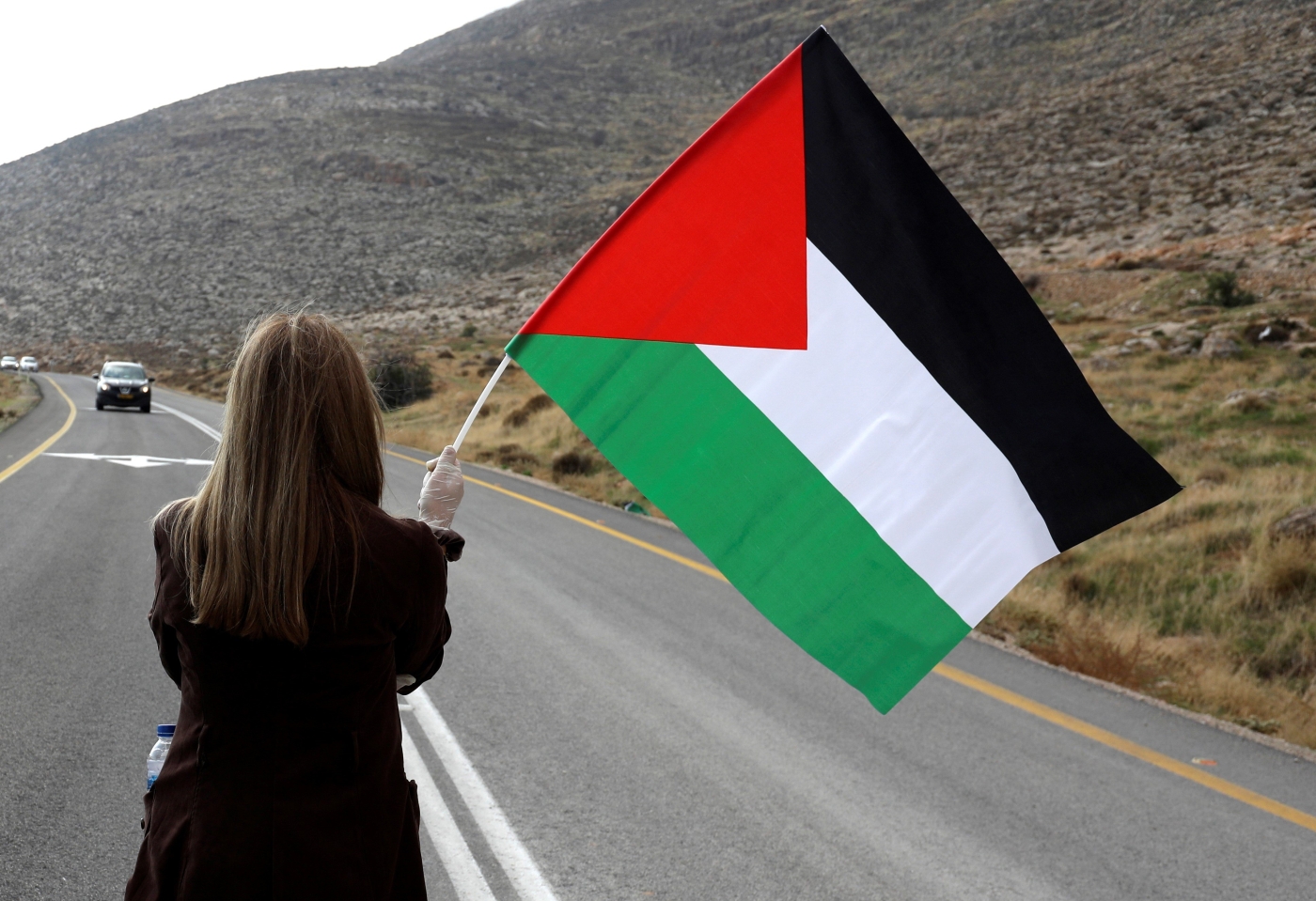 A Palestinian woman stands in a road to stop Israeli settlers from passing, during a demonstration against Jewish settlements on 20 November 2020 (AFP)

One of the exceptional and key elements in the diplomatic game Israel has deployed since its establishment in 1948 has been its refusal to recognise the right of the indigenous Palestinian people to represent themselves.

Whereas Israel, in the words of Golda Meir, insisted that "the Palestinian people do not exist" well through the 1970s and 1980s, the international community, especially the United Nations and formerly colonised countries around the world, came to recognise the Palestine Liberation Organisation (PLO) as their sole and legitimate representative in the mid-1970s.

Essentially, what Israel, and the US behind it, demanded was that for representatives of the Palestinians to gain legitimacy by the colonial West and the Israeli settler-colony they would have to fully surrender all their national indigenous rights to their Jewish colonisers.

It took representatives of the Palestinians from 1948 until 1993 to accept Israeli conditions and surrender, when the PLO signed the Oslo accords

Once the PLO surrendered all the internationally recognised national indigenous rights of the Palestinian people in Oslo, the negotiations that Israel agreed to conduct with it were essentially about the nature and mechanisms of continued Israeli occupation over less than a third of the Palestinians (in the West Bank and Gaza). Israel barred any negotiations over its rule over and oppression of the rest, whether refugees in exile or the oppressed minority subject to an apartheid regime inside Israel. Almost three decades of negotiations later, Israel decided that the nature of its settler-colonial rule over all Palestinians after Oslo should remain as it was before, if not intensified further. Israel then moved to ensure that the Palestinian resistance movement, Hamas, would be labelled a terrorist organisation in Europe and North America, as it had done with the PLO until 1991, unless Hamas followed in the footsteps of the PLO and surrendered by accepting the legitimacy of Israeli settler-colonialism across Palestine, and renounced all resistance.

But was this a new or old colonial strategy? Whence came Israel’s longstanding refusal to recognise the Palestinian people and the legitimacy of their representatives unless they surrendered and accepted dispossession by Jewish settler-colonialism as legitimate?

As with every other measure the Israelis use to subdue the Palestinian people, they have never innovated strategies, but rather plagiarised well-established European colonial precedents. In fact, the conditions Israel set for recognising the legitimacy of representatives for the Palestinians were the standard conditions set by British colonial rulers after Britain conquered Palestine between December 1917 and September 1918.

Palestinians had established myriad organisations to resist British occupation and sponsorship of Jewish settler-colonialism; the most prominent were branches of Muslim-Christian Associations (MCA) across the country, with the first formed in Jaffa.

In November 1918, the Jaffa MCA submitted a memorandum to Brigadier-General Sir Gilbert Clayton, chief political officer and policymaker of the British military administration, affirming the Arab character of Palestine (“our Arab homeland, Palestine”) and objecting to the 1917 Balfour Declaration’s Jewish National Home policy.

This was especially important, as the Jewish colonists, under the sponsorship of the Zionist Organization (now the World Zionist Organization), staged a parade on 2 November, the first anniversary of the Balfour Declaration, to celebrate the success of their colonial project.

The MCA convened the first Palestinian National Congress in Jerusalem in early 1919, and called for the liberation of Palestine and all of Syria. The major purpose of the Congress was opposition to Jewish settler-colonisation. Citing Wilsonian principles of self-determination, the Congress dispatched a delegation to the Paris Peace Conference to deliver its demands. 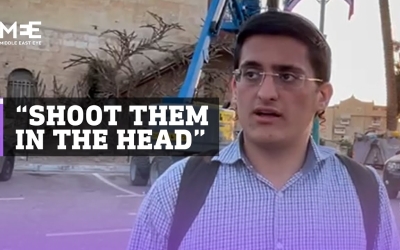 In July 1920, the same month France conquered Syria and ended its independence, the British replaced their military government in Palestine with a civilian one, and appointed the Zionist British politician Herbert Samuel as the first High Commissioner of their new colonial acquisition.

A third National Congress convened in Jaffa in December 1920 and called for the "independence" of Palestine. The Congress elected a committee, the Palestinian Arab Executive, to represent it before the British government and internationally. High Commissioner Samuel replied to the Congress’s demand for independence by stressing that the participants did not represent the Palestinian people.

When the Muslim-Christian Associations appointed a delegation to travel to Europe in 1921, the British colonial secretary wrote to Samuel to state that the delegation should be aware that: "administrative reform can only proceed on [the] basis of acceptance of the policy of creation of a National Home for the Jews, which remains a cardinal article of British policy”. He added that “No representative bodies that may be established will be permitted to interfere with measures (i.e., immigration, etc.) designed to give effect to [the] principle of a National Home or to challenge this principle."

When the British offered to establish a legislative council for Palestine in 1922, they insisted that candidates and parties would have to recognise the legitimacy of the British colonial Mandate and its Zionist settler-colonial project. The Palestinians refused. The fifth Palestinian Congress, convened in 1922, launched a campaign to boycott the elections.

The sixth Congress, in June 1923, met after the League of Nations granted the Mandate to the British, and stressed non-cooperation. Ultimately, the British refused to recognise any Palestinian representative association that did not accept the legitimacy of the British Mandate over Palestine and its commitment to Jewish colonisation of the country.

As none accepted these conditions, the British denied the Palestinians and their organisations national recognition throughout their three-decade rule.

When the Zionists conquered Palestine and established Israel in 1948, they already had an effective strategy that the British and the League of Nations had followed to deny the Palestinians national recognition.

Once Palestinians surrender and accept Israel’s right to colonise them, the West would grant them a hypocritical understanding of a "lite" version of "human" rights

Therefore, it was a drastic transformation when the UN, the successor to the League of Nations, recognised the PLO in 1974, more than half a century after the League had sponsored Jewish colonisation of their country and denied recognition to the Palestinian people.

Following the Oslo accords, the PLO, which established the Palestinian Authority, lost much of its legitimacy, as it became a collaborator with the occupation and surrendered the national rights of the Palestinians. With the rise of Hamas in December 1987 and its increasing legitimacy among Palestinians, the Israelis began to follow the same old British colonial formula they had followed with the PLO, an effort that intensified internationally in the 1990s, following the Oslo surrender.

As a result of Israeli efforts, in the past three decades the United States (October 1997) and the European Union (December 2001) designated Hamas a "terrorist" organisation, and refuse any diplomatic engagement with it unless it "recognises" Israel and "renounces" armed resistance to Israeli settler-colonialism. Following Hamas’s landslide victory in Palestinian legislative elections in 2006, the so-called Quartet of US, EU, Russian and UN diplomats imposed similar conditions on any Palestinian Authority government that might be formed.

These are hardly novel conditions that the West has set before it agrees to engage the leaders of the colonised natives of Palestine.

In 2018, a US-sponsored resolution to condemn Hamas was defeated in the UN General Assembly, though assiduous US efforts were able to rally 87 countries to support it. Hamas mounted a legal challenge in 2010 to the EU designation, a case it won in 2014 when the EU General Court ruled in its favour. The EU appealed the decision in 2015.

More court judgments came in 2017 and 2019, which maintained Hamas on the designated terrorist list. In September 2019, however, a lower European Court in Luxembourg reversed those decisions and removed Hamas from the list, leading the European Court of Justice to also remove it.

Nonetheless, as the EU court decision is a legal "opinion", it is not binding on the EU, which continues to consider Hamas "terrorist". Hamas’s legal efforts came to nought. Still, last May the EU sent signals of its willingness to open diplomatic channels with Hamas, provided the latter met its conditions of recognising Israel and the PLO’s 1993 surrender at Oslo.

The effort to delegitimise Hamas became more urgent after the resistance organisation’s military performance last May, when it retaliated against Israel’s ongoing colonial onslaught. In response, Swiss Jewish organisations launched a campaign to have the Swiss government list Hamas as "terrorist".

The Swiss foreign ministry refused to do so, while stressing that it "condemns the fact that Hamas denies Israel’s right to exist and defines armed struggle as a legitimate means of resistance".  Also last month, the German parliament went as far as to ban the Hamas flag. As for the United Kingdom, the longtime sponsor of settler-colonialism in Palestine, it had designated Hamas’s military - but not its political - wing as "terrorist" in March 2001.

Meanwhile, the Quartet faced the possibility of yet another Hamas victory in the cancelled elections that were supposed to take place this year, and reasserted its own conditions for recognising a Palestinian government, namely, that the "future Palestinian government must be committed to non-violence, recognition of Israel, and acceptance of previous agreements and obligations".

What the history of British, US, European and Israeli refusal to recognise the national and indigenous rights of the Palestinian people to their own country, and their right to defend themselves against Zionist settler-colonialism, has clearly shown is that the Palestinians would only be recognised as a people after they surrender all their national indigenous rights. Israel has long been an apartheid state. Admitting it now is too little, too late
Read More »

Once they surrender and accept Israel’s right to colonise them and steal their country, and once they renounce resisting settler-colonialism, the West would grant the Palestinians a hypocritical understanding of a "lite" version of "human" rights, which Israel itself, however, would continue to deny.

The Palestinian leadership refused to surrender to Britain and Israel from 1918 until 1993. Since their surrender, the PLO and the PA have come to symbolise nothing less than a Quisling regime.

With the final loss of the PA’s meagre legitimacy during the Israeli attacks on all Palestinians in May, Israel, the West and their Arab allies began to worry about the astronomical rise of Hamas’s popularity among the Palestinians and across the Arab world, prompting the increased pressure to further delegitimise the organisation internationally in an effort to force a PLO-style surrender.

What Israel and its Arab and Western allies refuse to recognise, however, is that no matter how many Palestinian leaders they have coopted to surrender since the early 1920s, their efforts have always failed to end the Palestinian anti-colonial struggle. There is no indication they will succeed in the future either.