Nada Elia
By pandering to mainstream feminist and LGBTQ agendas, one is suggesting that straight Palestinian men are eminently killable 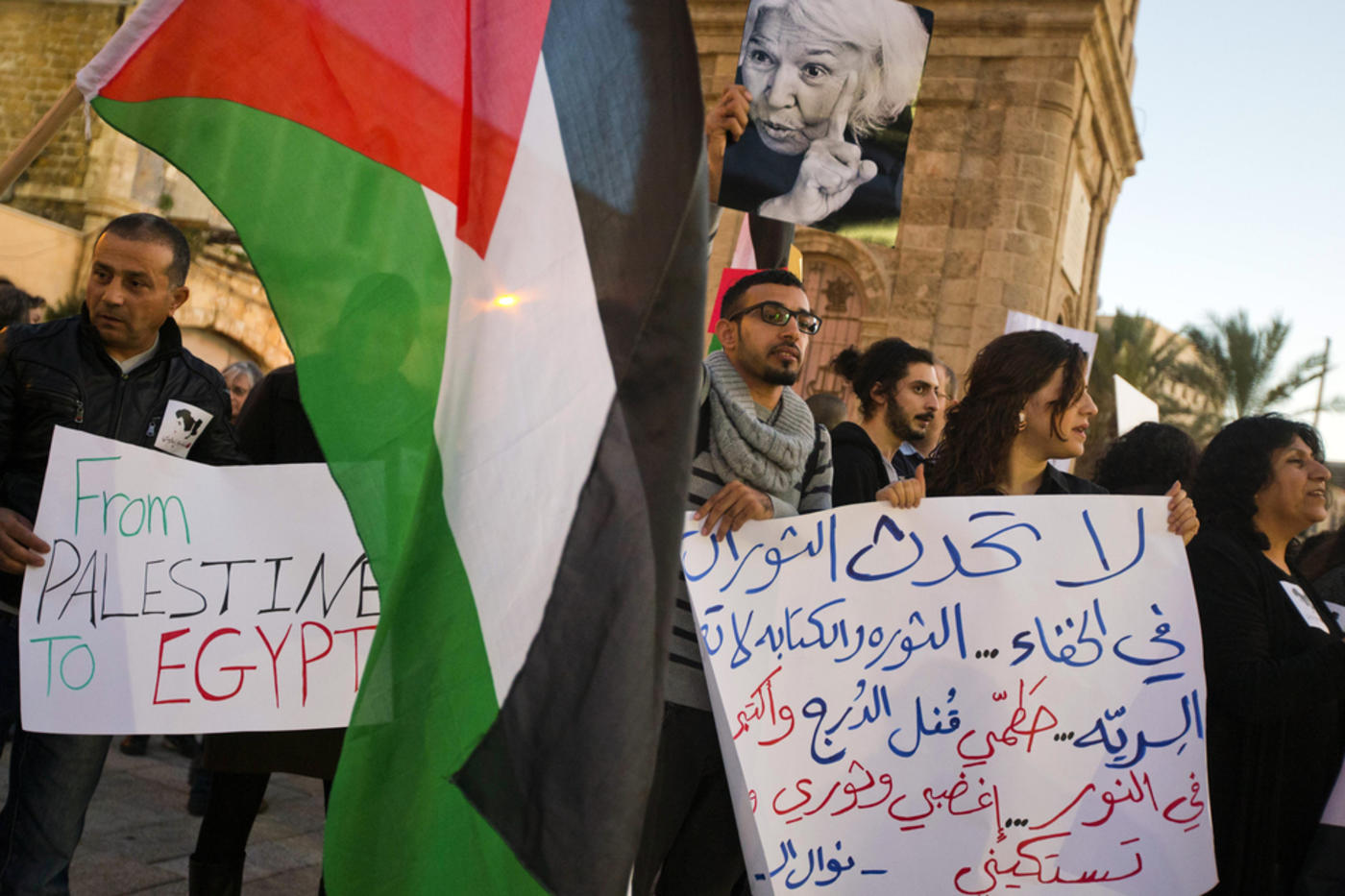 In November, the National Women’s Studies Association (NWSA) became the first mainstream Western feminist association to vote, overwhelmingly, to endorse the Palestinian academic and cultural boycott campaign against the state of Israel.

Global North feminism had come a long way from the days when a rude, clueless and patronising Betty Friedan attempted to silence the prominent Egyptian feminist Nawal al-Saadawi at the UN International Conference on Women in Nairobi, Kenya. “Please do not bring up Palestine in your speech,” Friedan told al-Saadawi as the latter was walking up to the stage, to give her lecture. “This is a woman’s conference, not a political conference,” Friedan continued.

That was 30 years ago, in 1985. Clearly, had Friedan, a prominant US women's rights activist, known anything much at all about al-Saadawi - besides the fact that she was a fiery Arab feminist - she would have known her request would go unheeded. Al-Saadawi cannot be silenced, and she gave exactly the talk she had planned on giving. As she later wrote: “Of course in my speech, I did not heed what she had said to me since I believe that women’s issues cannot be dealt with in isolation from politics. The emancipation of women in the Arab region is closely linked to the regimes under which we live, regimes which are supported by the USA in most cases, and the struggle between Israel and Palestine has an important impact on the political situation. Besides, how can we speak of liberation for Palestinian women without speaking of their right to have a land on which to live?"

But this interaction between Friedan and al-Saadawi revealed more than the ignorance of one Western feminist about the pre-eminent Arab feminist of the time. It was, and remains, a telling illustration of the highly problematic Global North approach to Global South feminism. It is an approach that seeks to decontextualise the circumstances of Global South communities, and analyse them as if they functioned in a space of their own, immune to global politics in the form of colonialism, occupation, militarism, international trade, “development plans,” or other manifestations of foreign intervention.

What is most important about the recent NWSA vote, however, is that it indicates a shift from “saving brown women” to a solid grasp of the fact that an entire people, women and children, but also men, are systematically oppressed.

Because the BDS movement denounces Israeli apartheid, and Israel’s oppressive measures against the entirety of the Palestinian people, not a specific section of it, a significant majority of Palestinian women’s organisations signed on to the Palestinian call for BDS. That call, however, addresses the circumstances of all Palestinians, and Palestine solidarity activists must be cautious to remind people of that comprehensive goal, even if the NWSA is a “feminist” organisation.

The wording of the resolution makes this understanding clear, as it denounces “the injustice and violence, including sexual and gender-based violence, perpetrated against Palestinians and other Arabs …. as well as the colonial displacement of hundreds of thousands of Palestinians during the 1948 Nakba”.

Indeed, Israel’s violence against Palestinians is both gendered and racist. Women and children - the victims most usually decried by Western feminists - but also all adult men, both gay and straight, are oppressed by Israel. The violence takes on multiple forms, but pervades every aspect of the lives of all Palestinians. Women are targeted as the mothers, sisters or wives of present and future “terrorists”.

Indeed, one of the infamous T-shirts worn by Israeli soldiers shows a young child, and states: “The smaller, the harder.” But the T-shirt doesn't even come close to telling the story of the trauma of Palestinian children, who have never known a single day of freedom or safety in their entire lives. These children live in constant fear, most if not all have seen their fathers arrested, many have been arrested themselves, and in Gaza, four are out five suffer from malnutrition at an age when deficiencies in micro-nutrients have life-long consequences on vital organs.

Still, the focus on “women and children” reveals a myopia that fails to appreciate that Palestinian men are also victimised. Certainly their humiliation hinges on the violation of social norms of masculinity and fatherhood. And denouncing the fact that there are hundreds of innocent women and children in Israeli jails suggests that it is OK to imprison thousands of innocent men.

Similarly, the inclusion of gay men amongst the people worthy of solidarity is also problematic, as it seems to reinforce the Orientalist perception of Arab and Muslim communities as irredeemably homophobic, while Israel is viewed as more “liberal,” more gay-friendly. This ignores the fact that Israel does not ask anyone about their sexuality before bombing them, and certainly did not ask anyone if they were gay in 1948, when it engaged in a series of massacres, erased over 500 towns, and displaced close to 80 percent of the entire Palestinian population, so as to create a Jewish state in the land of Palestine.

Indeed, as I wrote in an earlier essay, when people decry the fact that a “disproportionate number of women and children” have been killed in any massacre, they are suggesting that there is some acceptable gendered proportion to the killings. What would that proportion be? Why is the murder of Palestinian men deemed acceptable? Are these men not also dispossessed refugees whose very human rights Israel violates? My earlier essay came out during Israel’s 2014 assault on Gaza, the so-called “Operation Protective Edge”.

But the sad reality is that every one of Israel’s attacks can be dubbed “Operation Kill Them All”. And what, besides murderous crass racism, can possibly justify the killing of any Palestinian man - even a resistance fighter - by an occupying power? Because we must keep in mind at all times that Israel, as the occupying power, has a legal obligation to protect the people whose land it occupies. That legal obligation is in addition to the fact that Israel, as a member of the United Nations, is obligated to respect UN General Assembly Resolution 194, which states that the Palestinian refugees have the right of return to their homes and towns they left.

The UN also recognises the right of people living under occupation to defend themselves, by all means available, including armed resistance. That right is enshrined in at least two UN Resolutions, United Nations General Assembly Resolution A/RES/33/24 of 29 November 1978, which:

"2. Reaffirms the legitimacy of the struggle of peoples for independence, territorial integrity, national unity and liberation from colonial and foreign domination and foreign occupation by all available means, particularly armed struggle."

"3. Reaffirms the legitimacy of the peoples’ struggle for liberation from colonial and foreign domination and alien subjugation by all available means, including armed struggle."

"7. Strongly condemns all governments which do not recognise the right to self-determination and independence of peoples under colonial and foreign domination and alien subjugation, notably the peoples of Africa and the Palestinian people."

An understanding of the specific manifestations of gendered oppression is essential for more effective solidarity. But by pandering to mainstream feminist and LGBTQ agendas, one is suggesting that straight Palestinian men are eminently killable, and can never be victimised by Israel.

This is not feminism; it is colonial racism practiced by women. Hence the importance of the recent NWSA vote to endorse BDS, which supports the entire Palestinian people.

In a situation of genocide, there is no room for selective solidarity. Or, as Haneen Maikey, co-founder and executive director of the Palestinian gay organisation AlQaws (Arabic for “the Rainbow”) told Western gay groups in 2014: “We don’t want your solidarity if you only support us. You need to be in solidarity with all our people.”