A Palestinian refugee in Saudi Arabia: 50 years of lost dreams

Sarah Aziza
Mass deportations, 'Saudisation', and hefty government handouts have only magnified the schism between Saudis and non-nationals 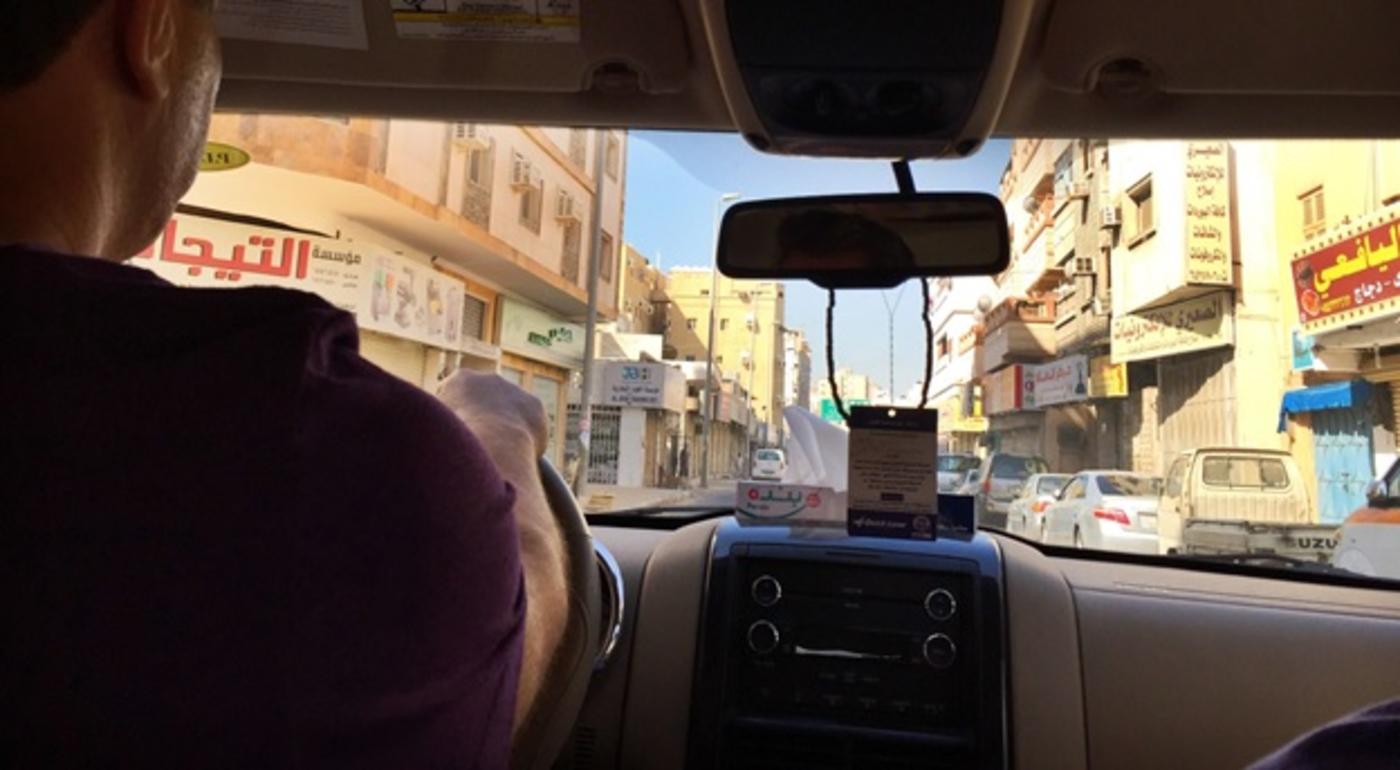 February is one of the less-sweltering months in Saudi Arabia, but the stubborn humidity leaves the sleeves of my abaya sticking to my arms. In my father’s Ford, we blast the AC and enjoy the rare, early-Friday emptiness of the Jeddah streets.

Shuttered storefronts crowd the quiet blocks, and for the time being there are more stray cats than humans in sight. It’s not until after noon prayer that the owners will arrive, peeling their stores open like so many sardine cans.

My father and I are indulging a common passion: time travel. Our destination: 1968. We’ve set our course for al-Sahifa district, a run-down neighbourhood in the older part of town, where we plan to visit my father’s first “real” home.

My father, Ziyad, arrived in Saudi Arabia at age seven, after the tumult of the Six Day War pushed his family out of their refugee camp in the Gaza Strip. Here, my father started second grade and my grandfather kept his family fed through a slew of odd jobs - street peddler, shoe seller, contractor and grocer. My father helped when he was old enough, and the family dined on expired canned food in leaner months.

We find al-Sahifa easily, despite the neighbourhood's changes. My father’s barber is gone, as is the cafe where he would loiter as a young boy, greedily watching television. Even so, much has remained the same - it’s with poignant surprise that he points to a still-operating grocery store on the corner. “That’s Dad’s shop,” he tells me, stuttering a little. We don’t go in.

My father switches off the engine and the two of us step into the muggy morning air. The streets are deserted except for a few dark-haired, hungry-looking men in beige tunics and thick plastic sandals. I adjust my green headscarf and follow my father towards a crumbling alley.

Jeddah is a city of transplants - my father’s story could be interchanged with thousands of others. Saudi Arabia’s population hovered around six million the year my father arrived. Not long after, the first oil boom created a spike in demand for labour, making the country a major destination for migrant workers.

Flocking to the kingdom from neighbouring Arab countries and South Asia, as well as other regions, these foreigners were responsible for much of the rapid expansion of infrastructure that transformed the country. Today, the country is home to nearly 30 million, including at least 9 million foreign workers and several generations of non-Saudis born and raised in the kingdom.

Even so, as we retrace my father’s childhood steps down the narrow, debris-strewn walkway, I know in some ways this is a good-bye.

After nearly 50 years, my father is giving up on Saudi Arabia.

“I’m tired,” he tells me, often, these days. After decades in the kingdom, he’s still a “temporary resident,” ineligible for public services and at the mercy of Saudi sponsors. He’s tired of the effort and expense required to maintain his six- to 12-month permit (iqama), the closest thing to permanency a non-Saudi can hope for in this country.

Most of all, though, he has grown weary of being told, in both subtle and explicit terms, that he’ll never really belong.

“I wanted to be a part of this country, I really tried,” he says. In his school yearbook, grainy photos show him in the traditional Saudi thobe and ghutra. He grew up playing football with Saudi neighbours in the trapezoid-shaped dirt patch outside his building. One of his teammates went on to play professionally; my father qualified, too, but was denied a spot -“Saudis only.”

My father’s next dream was more practical - he wanted to become a pilot. Several of his peers would go on to do just that, but my father’s lack of citizenship would exclude him from the government-subsidised training programme. He’s never lost his fascination for flying, but he’s never set foot in a cockpit either.

Like many other non-Saudis in the kingdom, my father continually found himself limited by a social system that privileges citizens while making citizenship nearly impossible to attain. He’d eventually take his fourth choice career - engineering.

Many of my cousins, born in Saudi Arabia to Palestinian parents, are experiencing the same dilemma today. My uncle, debilitated years ago by cancer, can’t afford rent, let alone college for his children. His daughters, who excelled in high school, are ineligible for government scholarships, so they loiter at home and pray for marriage proposals.

Later in life, my father would develop an interest in real estate, but he’d come to learn that there, too, the door is closed to non-Saudis. Extensive prohibitions on property ownership make it nearly impossible for anyone but citizens to buy land for such purposes. My dad would work as a manager for other people’s estates, in a city where he’d spent years building classrooms, homes, and businesses for Saudi owners.

Perhaps this exclusion is especially painful for people like my father, who, as a Palestinian, grew up stateless. Even so, my father’s story is less tragic than many. The system of Saudi sponsorship renders immense power to the sponsor, and has been used by some to wield abusive power over migrant labourers. Even in the most benign cases, these policies are still a cold reminder that this is a country that belongs first and foremost to its nationals.

It’s not a long walk from the car to my father’s front “door” - a small metal trap set below street-level (it flooded with rain and sewage quite frequently, he recalls). The walls are cracked, and this one-room hotel appears abandoned - we have no way of knowing for how long, or by whom. My father is quiet for a moment, glancing right and left, seeming a little struck by the smallness, and the familiarity.

Looking at the garbage-strewn streets of al-Sahifa, I’m struck by how far he’s come. He worked hard, but he’s quick to admit that teachers, mentors and employers - many of them Saudi - played a large part in his journey. Perhaps it’s his well-founded friendship with these Saudis that make him resent the system that’s devoted to separating them.

The seemingly inexhaustible wealth of the oil industry has created and sustained this stratified society. Now, with the shifts in the energy market stemming the flow of revenue, Saudis should be questioning whether they’ve done enough to foster resilience - or loyalty - in their workforce. Recently, mass deportations, “Saudisation” movements, and hefty government handouts have only magnified the schism between Saudis and non-nationals.

My grandfather - a large-limbed, dark-faced patriarch I know only through pictures - died before my grandmother did. He was buried in a local cemetery. When she passed, my father was informed that the plot where my grandfather lay had been re-purposed as a Saudi-only site. They told him to find somewhere else to bury his mother.

It’s the daily indignities, I think, that are driving my father away. Away from a country that he admits was an important sanctuary for his family post-war, and the site of many fond memories and most of his professional accomplishments.

When he leaves, it will be with relief mixed with remorse - remorse for what could have been for him, what cannot be for my cousins, and the loss of the country he tried so long to love.