Peace to Prosperity: Will Jared Kushner have his knafeh and eat it too? 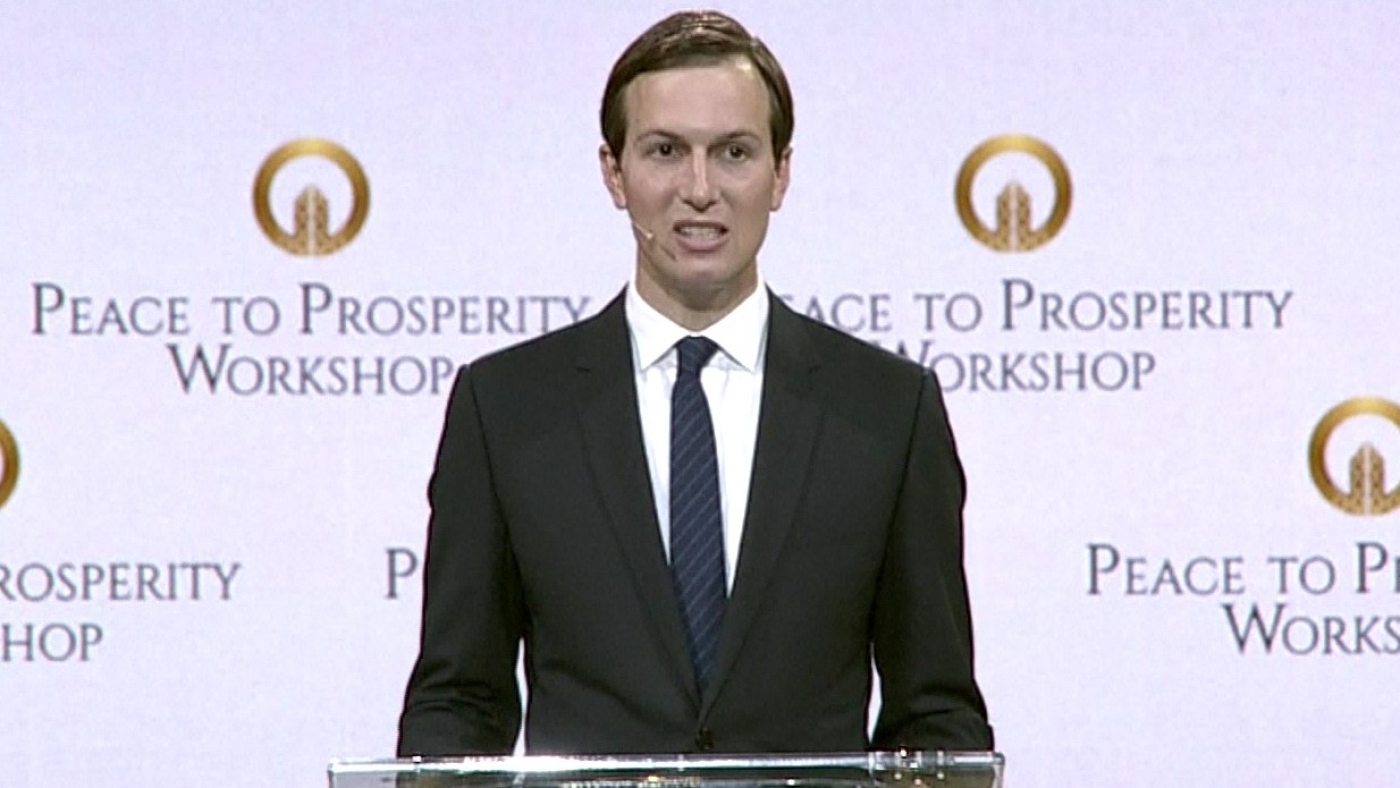 White House senior adviser Jared Kushner giving a speech at the opening of the 'Peace to Prosperity' workshop in Manama, Bahrain on 25 June (AFP)

Back in 2010, New York Times columnist and faithful Zionist Thomas Friedman complained: “Destructive critics dismiss Gaza as an Israeli prison, without ever mentioning that had Hamas decided - after Israel unilaterally left Gaza - to turn it into Dubai rather than Tehran, Israel would have behaved differently, too”.

The dubious merits of Dubai aside, Friedman himself never managed to mention that the purpose of Israel’s not-really-withdrawal from the Gaza Strip in 2005 was, as then-Israeli prime minister Ariel Sharon’s own senior adviser put it, the “freezing of the peace process” and “prevent[ing] the establishment of a Palestinian state”.

Nor did the columnist care to devote much thought to the fact that Israel’s “behaviour” has often consisted of bombing Palestinians to smithereens, or that it’s not quite possible to build Dubai while under brutal military occupation and siege.

Now, nine years after the Friedmanian prescription for Gaza, we’ve got another, higher profile non-solution to the Palestinian question - this one courtesy of the nepotistic administration of Donald Trump and specifically his son-in-law, Jared Kushner.

Kushner’s recently unveiled economic plan, titled "Peace to Prosperity", purports to offer “a vision to empower the Palestinian people to build a prosperous and vibrant Palestinian society” and to “realise an opportunity to pursue their dreams”.

Never mind that the Palestinians themselves are not on board; after all, Arabs cannot possibly understand their own best interests without some guidance. Luckily, thanks to a Western habit called Orientalism, Kushner & Co can totally read their minds.

"Peace to Prosperity" promises a “potential to facilitate more than $50bn in new investment over ten years”. The gist of the 40-page document outlining the vision is that the Palestinian people will most effectively be able to “continue their historic endeavour to build a better future for their children” and to “open a new chapter in Palestinian history” that is defined “not by adversity and loss, but by freedom and dignity”.

All that is required is to definitively convert their world into a neoliberal amusement park based on “private-sector growth”, “foreign direct investment”, “free trade agreements”, and all that good stuff.

Again, it’s not clear how people are supposed to go about building anything or pursuing “peace” when the state of Israel regularly destroys Palestinian infrastructure while engaging in bouts of slaughter.

It’s also unclear what sort of realm “the Palestinian people” will inhabit, seeing as the word “Palestine” appears not once in the document. The political portion of Trump’s so-called “deal of the century” will be revealed at a later date because, you know, there’s nothing politically urgent about 71 years of Israeli ethnic cleansing and dispossession.

But never fear: the economic plan’s authors assure us that Peace to Prosperity “will empower the Palestinian people to build the society that they have aspired to establish for generations”.

Just as the Hondurans aspired to establish a nation of sweatshops and the Mexicans aspired to sabotage their own agricultural sector and livelihoods via the North American Free Trade Agreement, the Palestinians will now have the chance to solidify their own neoliberal bliss.

To be sure, there is no time to waste in unproductive endeavours, such as aspiring to not be obliterated by Israeli projectiles, sniped at, or subjected to apartheid - or, for Palestinian refugees, aspiring to the right of return - when the predatory needs of international investors must be attended to.

5/ Nablus's Knafeh and Rukab's ice cream, showcasing Kushner's sensitivity to local delights, are indeed to die for. Yet even these flavours, and a tourism industry built around them, will not hypnotize Palestinians into believing they are not living under brutal occupation.

The Peace to Prosperity folks have all sorts of ideas for their neocolonial experiment, ranging from “natural resource exploitation” to tourism development, which is especially promising since “traditional Palestinian cuisine varies across regions and excites visitors”.

For a taste of the excitement, we are given the examples of Ramallah’s Rukab ice cream and “the famed knafeh of Nablus”. But traditional delicacies can hardly sugarcoat a landscape of institutionalised oppression.

The plan also includes capital-based solutions for the Palestinian people’s current hardships in terms of access to electricity, clean water, farmland, health care, and so on - with zero acknowledgement that Israel is largely to blame for all of these dire situations in the first place.

Furthermore, what is the point of a programme to “rapidly increase the capacity of Palestinian hospitals by ensuring that they have the supplies, medicines, vaccines, and equipment to provide top-quality care and protect against health emergencies” in light of the Israeli tradition of bombing hospitals and medical personnel?

In the meantime, other emergencies proceed apace - like when the US ambassador to Israel recently decreed that Israel has the right to annex portions of the illegally occupied West Bank.

Anyway, surely that’s nothing that will jeopardise “peace”. According to the "Peace to Prosperity" document, a central aim of the economic plan is “empowering the Palestinian people”.

But while the continuous reiteration of this phrase is at least preferable to, say, former Israeli prime minister Golda Meir’s infamous contention that there was no such thing as “a Palestinian people”, the real objective of "Peace to Prosperity" is total Palestinian disempowerment and wholesale surrender to the Israeli enterprise.

As the diabolically underhanded spectacle unfolds, here’s hoping Kushner doesn’t get to have his knafeh and eat it too.