REVIEW: We Crossed a Bridge and It Trembled - Voices from Syria 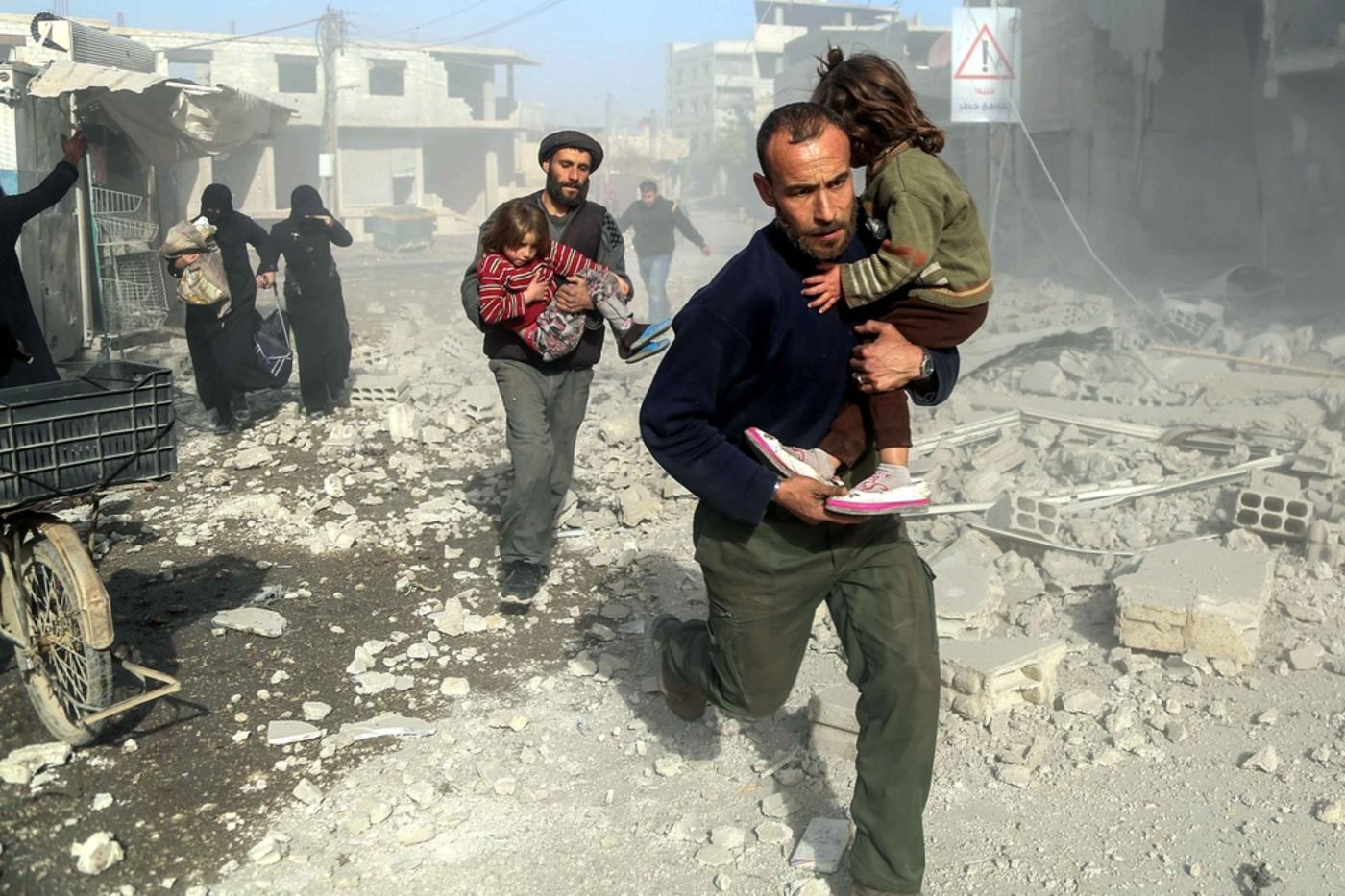 The conflict in Syria continued to rage in 2017, even though the slight decrease in daily casualties, media fatigue after six years of war, the defeat of Islamic State in Syria and a near halt in refugees heading to neighbouring countries and Europe all contributed to a shift in public attention.

The media also switched its focus in the region, preoccupied as it is with the disastrous war in Yemen, the tensions between Gulf states and protests about US President Donald Trump's Jerusalem declaration.

But the war in Syria still ploughs on: very few Syrians can afford to flee as all neighbouring countries have locked their borders. Instead, they now suffer and die inside Syria, away from the limelight.

Victory for the forces led by President Bashir al-Assad now seems inevitable. But the fate of those Syrians who cannot safely live under his rule due to their opposition remains uncertain.

Wendy Pearlman's We Crossed a Bridge and It Trembled: Voices From Syria is a timely reminder of the immense personal cost that Syrians have paid for daring to revolt against the regime of Bashar al-Assad. The book is a collection of first-hand testaments Pearlman gathered from Syrian refugees in Jordan, Lebanon, Turkey, Europe and the United States.

Pearlman provides a brief summary of the Syrian uprising and war in the introduction, but the rest of the narrative is comprised of testimonies alone, with Syrians speaking in their own terms about their own experiences.

Through the adroit combination of these voices, readers gain a solid grasp of the Syrian uprising and its deterioration into a bloody civil war from the point of view of participants and victims.

Wendy Pearlman is an associate professor in political science at Northwestern University in Illinois. She speaks fluent Arabic and has conducted field research in Morocco, Palestine, Lebanon, Jordan, Turkey and Egypt.

The considerable space dedicated to describing life in Syria before 2011 provides an unvarnished view of the violence inherent in the so-called "safety and stability" that existed under the Baathist leadership.

Pearlman's role throughout is that of sympathetic interviewer and attentive editor. While many of the stories and themes will be familiar to Syria-watchers, some testimonies reveal fresh information about this most documented of uprisings and civil wars. These include the escape of Ismaili leftist activists to Ghouta and the warm welcome they received from their conservative Muslim hosts, who hailed their participation in the local anti-regime protests.

Pearlman masterfully intertwines the testimonies of her Syrian eyewitnesses to produce a rich chronological account, starting with Syria under Baathist rule, the euphoria of the uprising in 2011, the horrors of the war, and subsequently, the escape from Syria.

The final chapter is dedicated to Syrian reflections on, and analysis of, the course of the uprising and war. It echoes many of the ongoing discussions among Syrian refugees and Syrians in rebel-held areas about whether the uprising was worth the immense sacrifices; also whether there is a possibility for change as the regime continues to consolidate its gains.

The structure of the book appears intended to mirror the emotional upheaval that pro-opposition Syrians have undergone during the past few years. It includes the fear and uncomfortable complicity of pre-2011; the exhilaration of "breaking the barriers of fear" in 2011; the horrors of Assad's torture chambers and war; and, finally, the sombre and fearful reflections of the defeated.

Pearlman's decision to let Syrians speak for themselves is of even greater importance due to how the Syrian uprising and war have been politicised, much more than any of the other uprisings associated with the Arab Spring

The centrality of fear in the Syrian experience was the focus of Pearlman's recent peer-reviewed journal article "Narratives of Fear in Syria," which appeared in the journal Perspectives on Politics.

Books comprised of first-hand testimonies can be rare, especially when the curator is a Western political scientist, a discipline that is sceptical of the stated intentions of participants in historic events.

This scepticism manifests itself, among other places, in a large body of political science work influenced by the study of economics. This argues that rebellions - such as that in Syria - erupt not through political or ethnic grievances but through economic interests, such as the ability to loot resources, best described as greed.

Pearlman's decision to let Syrian speak for themselves is of even greater importance due to how the Syrian uprising and war have been politicised, much more so than any of the other uprisings associated with the Arab Spring.

The fringes on the far-left and far-right of western politics have each adopted conspiratorial views that deny the human agency of Syrians and instead see them as mere pawns who have risked their lives to rebel against the Assad regime as part a CIA- or Israeli- or Salafi-backed conspiracy.

Books on the Syrian uprising and war, like other written accounts of history, have largely been produced by Western and Syrian elites. Even when such works are sympathetic to the Syrian underclass, they often fail to account for the individual motivations and viewpoints of members of this important group.

Pearlman's decision to incorporate testimonies from Syrians spanning all socio-economic classes of pre-2011 society, from professors to illiterate stay-at-home mothers (one of the longest testimonies in the book is of a mother who never attended school) is noteworthy and laudable. It allows the reader to understand the motives behind the uprising and war as seen by the stratum which formed the backbone of the protests and subsequent armed rebellion.

As the book focuses on the Syrian uprising, it naturally highlights voices of those who participated in the uprising or were supportive of it. With the opening of the route to Europe, however, many Syrians who support the regime or support neither side in Syria, fled their country. Pearlman's account could have benefitted from such testimonies, which would have provided the reader with a better understanding of the complexities of the conflict.

The main limitation of the book stems from the wider inability of all researchers to safely access rebel-held Syria. Thus, despite the unprecedented comprehensiveness of Pearlman's research, the voices of certain Syrians who played an instrumental role in the uprising are absent.

These include Syrian activists and rebels, who chose to stay and continue confronting the regime; also Syrians who, by the time they decided to leave, were unable to do so because neighbouring countries had already closed their borders. This matters because those still remaining in rebel-held Syria are, in some respects, markedly different from those who fled, and are usually poorer, less educated and more emotionally scarred.

My own conversations with Syrians in rebel-held Syria indicate that these communities have undergone two distinct processes during the past two years.

Some, especially the rebels, have gone through a process of religious radicalisation, accompanied by a growth in nihilistic tendencies. This group increasingly includes teenagers, whose lives and education have been disrupted by the war.

The second process has affected the wider civilian population, which is increasingly defeated, exhausted and, as a result, much more pragmatic. These voices are missing from most of the writing and media coverage of the ongoing war, including in Pearlman's research here.

The paranoia of war

One important section of the book focuses on life under the Baathist regime, providing poignant snapshots of the subjugation and pervasive fear that Bashar al-Assad and his father, former president Hafez al-Assad, instilled in their subjects, as well as their rampant corruption.

A doctor from Homs describes how, as a child, he was told to tell callers to the family home that his father was in the bathroom, lest his practice of praying privately was exposed and he face incarceration under suspicion of being an extremist.

Any unsanctioned gatherings of citizens, no matter how apolitical or conforming to the leadership line, were perceived as a threat by the Syrian leadership, be they groups of students who had banded together to clean their school in Damascus, protests in solidarity with Palestine, or demonstrations against the 2003 invasion of Iraq.

Pearlman's interviewees repeatedly describe an all-pervasive sense of being monitored and unable to trust even relatives and friends, amid fears that they might be state agents, or else unintentionally appear disloyal.

Such rule was maintained through state terror, including mass arrests, torture and executions, all of which are described in Perlman's book, sometimes in graphic detail.

As the West and allies of the opposition drop the pretence of demanding Assad's departure as part of the war's endgame, these testimonies become all the more important.

As the West and allies of the opposition drop the pretence of demanding Assad's departure as part of the war's endgame, these testimonies become all the more important

Syria after Assad's victory will not be the Syria of pre-2011: the state will now be weaker and more dependent on support from foreign patrons and local warlords and financiers. The spread of social media among loyalist communities in the intervening years will likely allow greater freedom of speech compared to the Syria that existed before 2011.

But reports from areas recaptured by the Syrian army and allies indicate a return of that all-pervasive fear, along with mass arrests and disappearances.

When we discuss "stabilisation," reconstruction and an end to the war with Assad remaining in power, we are merely agreeing to relegate Syria's state violence from the killing fields of Aleppo and Daraa back to its natural habitat of torture dungeons and administrative abuses, constant self-censorship and all-encompassing fear and distrust.

These not only destroy social relationships but also ingrain in the population a humiliating sense of complicity with injustice.

Elizabeth Tsurkov is a research fellow at the Forum for Regional Thinking focusing on Syria. She is currently pursuing her second Master’s degree in political science, at the University of Chicago. Prior to moving to the United States, Tsurkov worked and volunteered at several Israeli human rights NGOs. She can be followed on Twitter @elizrael

Photo: Syrians make their way through debris following a reported air strike in the rebel-held town of Beit Sawa in the eastern Ghouta region on the outskirts of the capital Damascus in December 2017 (AFP)