David Hearst
Russia has new allies in Iraq, UAE, Jordan, Egypt and Israel - but its Syria intervention will be a magnet for Sunni militants. What could go wrong? 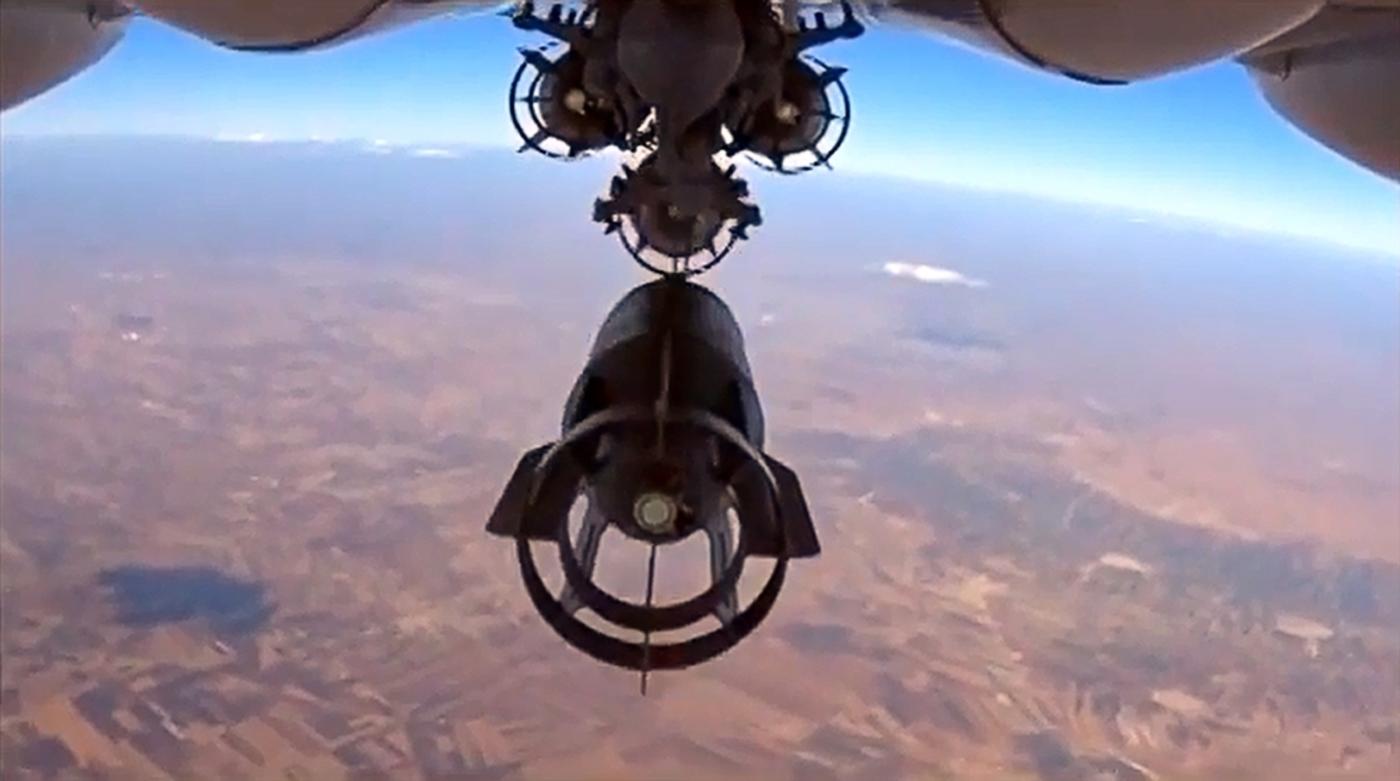 A year and half after Muammar Gaddafi was discovered hiding in a drainpipe and lynched, a mysterious video appeared in Russian on YouTube denouncing the Prime Minister Dmitri Medvedev as a traitor. One-hour long, with high production values, and an elite cast of interviewees headed by the former KGB Middle East veteran Evgeny Primakov, the video was thought at the time to be the work of the FSB, the KGB’s successor.

The video’s thesis was this: Medvedev was a traitor for having signed the UN resolutions allowing the intervention in Libya. It accused the Russian premier of being weak and ready to surrender Russia’s interests to a conniving America.

And Russia’s interests in Libya? Leonid Ivashov, a retired general and head of the Academy of Geopolitical Issues, defined them thus: "We lost an important ally, an important strategic partner and billions were lost to our economy and defence industry."

Cut to a group of workers at the engineering plant of KB Mashinostroyeniye outside Moscow: "Apart from the material losses, there is loss of morale as well. When you feel that everything you worked for over so many years is no longer needed," says Leonid Sizov.

The FSB’s rage with Medvedev supports the thesis that it was the bitter memory of Libya rather than more distant Russian military humiliations in Afghanistan, Kosovo or Chechnya that drove Putin’s current project to take the pilot’s seat in Syria.

In other fora, Russia’s flip-flopping commentariat - who under Boris Yeltsin were cringeingly pro-Western, but who under Putin rebranded themselves as patriotic nationalists - discussed and dismissed the Arab Spring. The consensus was there was no such thing. They all agreed Tunisia and Tahrir Square were CIA special ops, just as the colour revolutions had been in Eastern Europe.

The same Kremlin paid analysts thought that the toppling of Gaddafi had nothing to do with a civilian uprising against a brutal regime. It was an oil grab by Americans, foolish enough to use militants as a proxy - just as they had done in Afghanistan against the Soviet army. Libya, after all, was Russia’s turf in North Africa.

There are several flaws in this analysis, not least the assumption that everything that happens in the Middle East is an expression of Putin’s obsessional relationship with America. This is not to deny the parallels between Bush’s behaviour in Iraq and Clinton’s behaviour in Russia.

The arrogance with which Bush thought he could break and remake the Iraqi state in 2003, as if  Jeffersonian shells of democracy could be fired through the barrel of a tank , had its precedents in the Clinton administration’s efforts to remake the Russian state after 1992. Both projects failed but they were children of  the same parent ideology - that after the collapse of communism, and before the emergence of a Chinese navy, all constraints on US power projection were off.

Putin therefore knew he was changing the rules of the game in Syria, but he did not do so without preparing the ground. He too has been busy creating coalitions of the willing. The building of a coalition against the Islamic State group (IS), with Bashar al-Assad at its centrepiece,  was initially seen as an Iranian-Russian move after the nuclear talks breakthrough. However a senior Qatari source has pointed to the significance of Russian ground troops in Syria, which would not be needed if the Russian move had been synchronised with Iran and Hezbollah. He said the presence of a ground force in Syria meant there was an element of competition with Iran for control of Syria.

Putin needed Arab allies. These he found in Jordan, the United Arab Emirates and Egypt. Mixing business with yet more business, Putin got Jordan’s King Abdullah and Crown Prince Sheikh Mohammed bin Zayed al-Nahyan of the United Arab Emirates and Egypt’s president  Abdel Fattah al-Sisi to attend a military airshow in Moscow in August. As MEE reported, Jordan recently withdrew its support for rebel forces on the southern front.

And Egypt, which has avoided showing support for Assad, is now openly supporting the Russian intervention on Assad’s behalf. Egypt’s Foreign Minister Sameh Shoukry said on Saturday: "Russia's entrance, given its potential and capabilities, is something we see is going to have an effect on limiting terrorism in Syria and eradicating it."

And speaking to Al Manar, Hezbollah’s television channel, the Russian analyst and former diplomat Vitslav Matozov has said that Russia received  support from an Arab country he declined to name. He gave a broad hint he was referring to the UAE when he said: “The Egyptian position in support of the strikes is a reflection of the Abu Dhabi position.” He added, “There is no doubt that the voice of Cairo is the background voice of a Gulf state other than Saudi Arabia.”

There is a fourth Russian ally in its bombing campaign: Israel. Netanyahu has maintained his relationship with Putin come what may. At one point he got Putin to take a delivery of S300 surface-to-air missiles off their flat-bed railway trucks, as they were on there way to Iran. On Sunday Maariv quoted an Israeli military source who said that continued civil war in Syria suited Israeli interests. He said the continuation of the Assad regime, which enjoys international recognition, relieves Israel of the burden of direct intervention and of deep involvement in the ongoing war. He noted that Israel agrees with both Russia and Iran on this matter. That is a remarkable statement considering that Iran is the chief supplier of Hezbollah and Assad’s Syria its sole conduit for long-range missiles that can strike deep into the heart of Israel.

So much for Putin’s Middle East allies. What about his opponents?

The three non-western countries who issued a joint statement condemning the Russian airstrikes were Saudi Arabia, Qatar and Turkey, the chief backers of the Syrian opposition. The joint statement was not signed by Egypt, Jordan and the UAE, despite pressure by Saudi Arabia to do so. These are clear signs of the Arab split. There has already been aerial jousts between a Russian Su-24 and Turkish F-16s in what Ankara claimed was Turkish airspace, and Turkish Prime Minister Ahmet Davutoglu said that the Turkish Air Force would activate military rules of engagement, stating that “even if it is a flying bird it will be intercepted”.

Matozov said that the Russians did understand the Saudi opposition to the operations against IS, and attributed it to the kingdom’s close ties with Washington - the Russian obsession. Here again the Russians fundamentally misunderstand what is happening in the Middle East, where America is losing control of its allies and everyone is doing their own thing. The Saudis were furious with Obama’s unwillingness to strike Assad after the gas attacks outside Damascus. Riyadh thinks that if the kingdom does not claim the role of protector of the majority Sunni population in the region, al-Qaeda or IS will.

So you have two of the richest nations in the Gulf, the region’s biggest army in Turkey, the majority of the population in Turkey, Lebanon, Syria, Jordan and the Gulf, and a significant portion of Iraq, all of whom regard Russia as an imperial, foreign aggressor. That’s quite some opposition.

Russia has not gone out of its way to sell its intervention to them. The airstrikes have been applauded by the Russian Orthodox Church, who praised Putin for fighting a holy war. "The fight with terrorism is a holy battle and today our country is perhaps the most active force in the world fighting it," said Vsevolod Chaplin, head of the Church's public affairs department.

This thought is not new. Bush used almost the same words when he said shortly after the September 11 attacks: "This crusade, this war on terrorism, is going to take a while." Indeed it has. Putin used the war on terror declared by Bush as cover for his own crackdown on Islamists in Chechnya. Now in Syria,  Putin is making the same mistake as Bush and Blair did when they invaded Iraq. In the meantime 12 years have passed, 12 years of continuous conflict,  proof of how dangerous it is to frame the fight in a Muslim country in religious terms.

Putin’s latest throw of the dice in Syria is a disaster on wheels - and one without any braking power. If Soviet jets in faraway Afghanistan proved such a powerful magnet for Arab militant fighters, just imagine what their appearance over the skies of Syria and Iraq would do as a recruiter for IS. Do not underestimate the importance of what Putin is embarking on - this is the first use of Russian military in a combat role in the Middle East in living memory. The Israelis detected a Russian presence alongside Egyptian forces fighting under Nasser in the aftermath of the 1967, but it was never officially admitted. Now it is.

This combat role robs Russia of the ability to restrain Iranian and Hezbollah’s support for Assad or to negotiate at Geneva a transitional role. It restokes a conflict that was losing steam and appeared to be headed towards a series of locally negotiated ceasefires, even counting opposition gains in the south. It is to repeat all the mistakes Syria and Iraq’s colonial masters in the US,Britain and France have made. It is to further alienate the majority population in the region.

An official Iraqi commander told MEE why they were so attracted to the Russian offer of help: "They (US-led coalition) refuse to strike private cars, mosques, bridges, schools despite the fact Daesh militants are mainly using these places as headquarters.” Another said "This is an exceptional war and our enemy has no rules," while another officer said: "How [can] you ask me to stick to the rules while my enemy is brutally killing my people every day, enslaving my sisters and destroying my towns and cities. Russians have no red lines, no complicated and restricted rules, so it would be easy for us to deal with them," he said.

What could possibly go wrong?  As they say in Russian, poechali (let’s go).

Photo: A video grab from a Russian defence ministry video purporting to show a Russian Su-24M dropping bombs during an airstrike in Syria. (AFP)