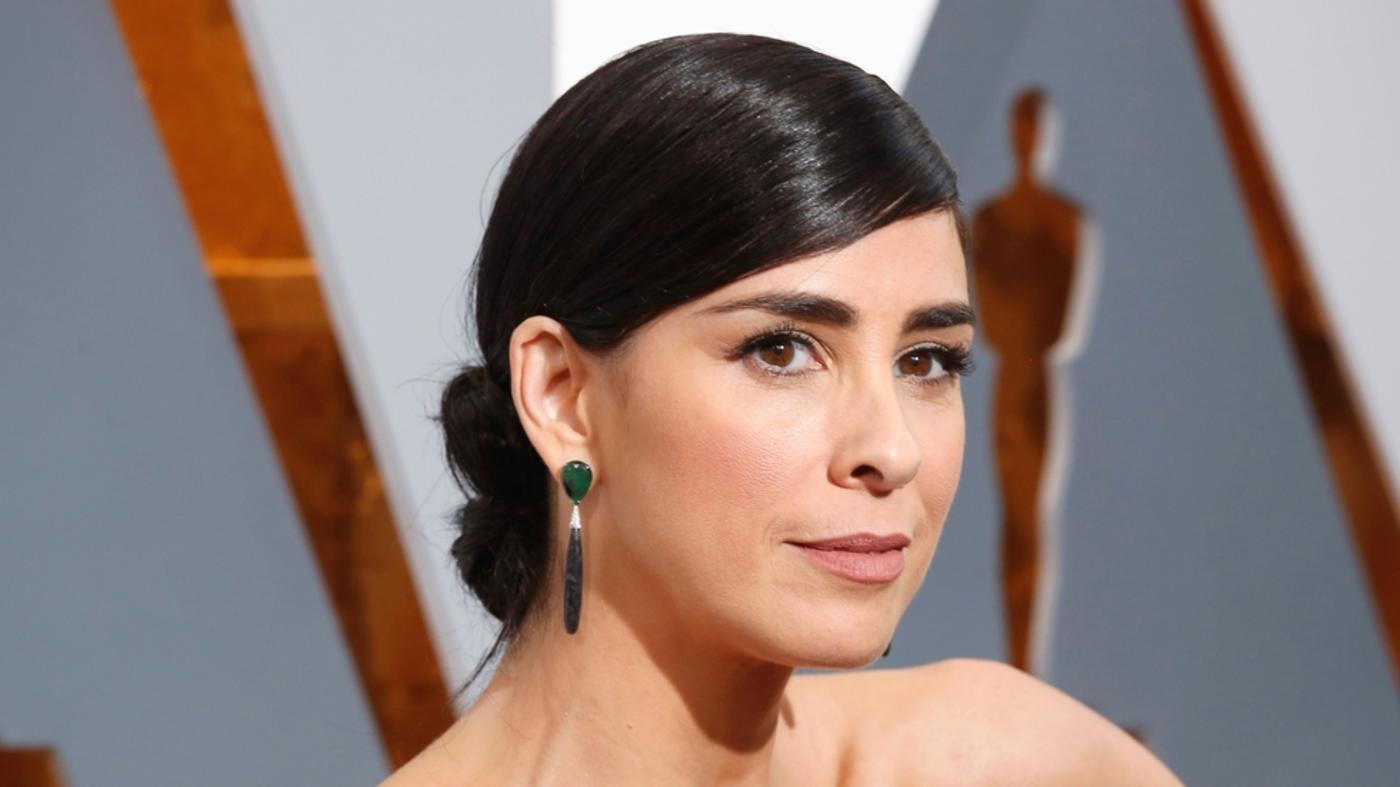 Last month, Sarah Silverman, a well-known Jewish American comic and actor, tweeted a link to an Amnesty International petition that calls upon Israel to release the 17-year-old Palestinian girl, Ahed Tamimi, who is being detained, alongside several of her family members, for slapping an Israeli soldier.

Tamimi was reacting after Israeli soldiers shot her cousin, Mohammed al-Tamimi, on 15 December while he was protesting US President Donald Trump's decision to recognise Jerusalem as Israel's capital.

Silverman attached her own words to the tweet, posting, "Jews have to stand up EVEN when - ESPECIALLY when - the wrongdoing is BY Jews/the Israeli government."

Despite receiving more than 1,600 replies, a majority of which expressed condemnation of her righteous tweet, Silverman remain undeterred in her expressed commitment to speak for injustices carried out by the state of Israel, fighting back against those who attacked her online, explaining in clear detail why she posted that tweet.

When pro-Israel activist Chloe Valdary accused Tamimi of belonging to a "notorious terrorist-supporting family", Silverman replied: "Ok, friend. But may I ask, do you wonder why she has done this? And where her rage comes from? And might we see ourselves in her in any way?"

Palestinian human rights defenders and activists praised Silverman for her brave and defiant stand against those who seek only to whitewash Israel's crimes against the Palestinian people. I wish that was the end of the story but sadly it isn't.

Jews have to stand up EVEN when — ESPECIALLY when — the wrongdoing is BY Jews/the Israeli government. https://t.co/vIKDxgLm41

Through intimidation and harassment, Israel's army of online trolls succeeded in pushing Silverman back into a corner. Three days after expressing solidarity with Tamimi, and imploring Jewish Americans to stand up against Israel's crimes, Silverman recanted, withdrawing to the safety of false equivocation.

"The more I learn the less I feel I know I'm going to RT [retweet] conflicting pieces on the Israel/Palestine from people who R there & believe w every fiber they know who is right & who is wrong. Both are very convincing. Both may even be right," tweeted Silverman on 18 February.

Her capitulation came the following day when she posted: "Dear Palestinians/Jews/Israelis/and everyone w an opinion: I can only speak for me & all I care about is what is true, & what is just. Unfortunately, from what I see, those things seem to be wildly subjective. Only God/Allah/Hashem/Mr. Rogers knows...."

Score another victory for Israel's army of online trolls! They've succeeded yet again in pressuring a prominent public figure into retracting his/her criticism of the apartheid Israeli state.

This is how Israel's trolls operate: the more prominent or well-known the person who posts something in favour of Palestinian human rights, the harder that person is hit with a tsunami of pro-Israel online trolls, who threaten and harass the account holder until either the post is removed or apologised for.

It's a tactic that works all too well, as these pro-Israel trolls not only work hand-in-hand with right-wing media publications, but also prey on people's fears of being falsely branded an anti-Semite.

Israel's effort to silence its critics has become both desperate and deranged, going so far to weaponise social media in order to "wage a propaganda war" against those who threaten or promise to boycott it until it ends its illegal occupation of the Palestinian territories.

"Israel aims to recruit a mob of slacktivists and trolls to join their war against the most insidious forms of violence: pro-Palestinian tweets and Facebook posts," observes Michael Bueckert.

Israel's effort to silence its critics has become both desperate and deranged, going so far to weaponise social media in order to "wage a propaganda war" against those who threaten or promise to boycott it

A 2017 study found that an Israeli threatens or insults a Palestinian online every 71 seconds, usually inciting or threatening violence, while using disparaging words such as "garbage", "whore", "dog", and "burn", which provides one with a little insight into what it's like to be on the receiving end of this kind of harassment.

In recent years, there has been any number of instances whereby a celebrity or high profile personality has posted something in favour of Palestinian liberation or human rights, but only to see that same person either delete, retract, or apologise for the post as a result of threats and harassment applied to them by the army of pro-Israel online trolls.

Earlier this year, Amena Khan, a British-Muslim model, was publicly pressured into stepping down from her position as the face of an advertising campaign for the cosmetics giant L'Oreal when online activists dug up tweets she had posted about Palestine more than three years earlier; tweets that fairly described Israel's assault of Gaza as one that was "terrorising innocent civilians".

After being falsely smeared as an anti-Semite, Khan deleted her tweets, and issued a statement expressing "deep regret" for the "hurt they have caused".

During Israel's 51-day assault on Gaza in 2014, pop singer Rihanna tweeted the hashtag "#Free Palestine", causing an avalanche of hateful tweets directed at her, and condemnation from US and Israeli political figures. In turn, she deleted the tweet, and then posted a picture of a Jewish and Arab boy embracing each other.

Don't make the mistake of conflating the effectiveness of Israel's online troll army with strength. That the Israeli state has come to depend on this kind of propaganda war represents undeniable weakness

That same year, actors Penelope Cruz and her husband Javier Bardem signed a letter condemning Israel's "bombing by land, sea, and air against the Palestinian civilian population in the Gaza Strip", but both later "walked the statement back" after facing a wave of criticism.

Similarly, US singer Selena Gomez posted a message asking for her Instagram followers to "pray for Gaza". She, too, deleted her post after suffering the wrath of tens of thousands of pro-Israel social media users, and then posted later that she wasn't "picking sides".

Two years ago, when Hollywood Oscar winners declined a free US$55,000 all-expense-paid trip to Israel as a way of expressing their tacit support for the objectives of the BDS movement, Israel and its right-wing media sympathisers accused Hollywood of being infiltrated by a wave of "anti-Semitism", which served to silence prize-winning actors from making public statements about their decision not to accept the free trip.

But don't make the mistake of conflating the effectiveness of Israel's online troll army with strength. That the Israeli state has come to depend on this kind of propaganda war represents undeniable weakness.

To this end, it's fair to assume that the days of the system of apartheid and occupation, that have come to define Israel, are numbered in years rather than in decades.

The enormous and ever-increasing economic and political costs of defying international law and human rights norms are becoming a weight too great for Israel to hold aloft.

While that may sound like the whimsical, wishful speculation of a long-time critic of Israeli policies, it's becoming ever more evident when Israel relies on an online troll army to defend itself against criticism. Does it fear that this criticism might undo it?

One also has to witness how much more threatening and aggressive the Israel lobby - and its associated constellation of activists and army of online trolls - have become in attacking and smearing anybody and everybody who has either expressed public criticism of Israel, declared public support for the boycott Israel movement (BDS) or Palestinian liberation in recent years.

A wild animal is at its most threatening when backed into a corner. Israel knows that its stubborn refusal to end its occupation of Palestine leaves it with no room to manoeuvre, and thus is increasingly flashing its teeth to anyone who seeks to corral it.