The strange love affair of Putin and Netanyahu

Yossi Melman
The new friendship is raising alarm bells in Washington, but so far no one has managed to work out the price Israel will pay to Russia 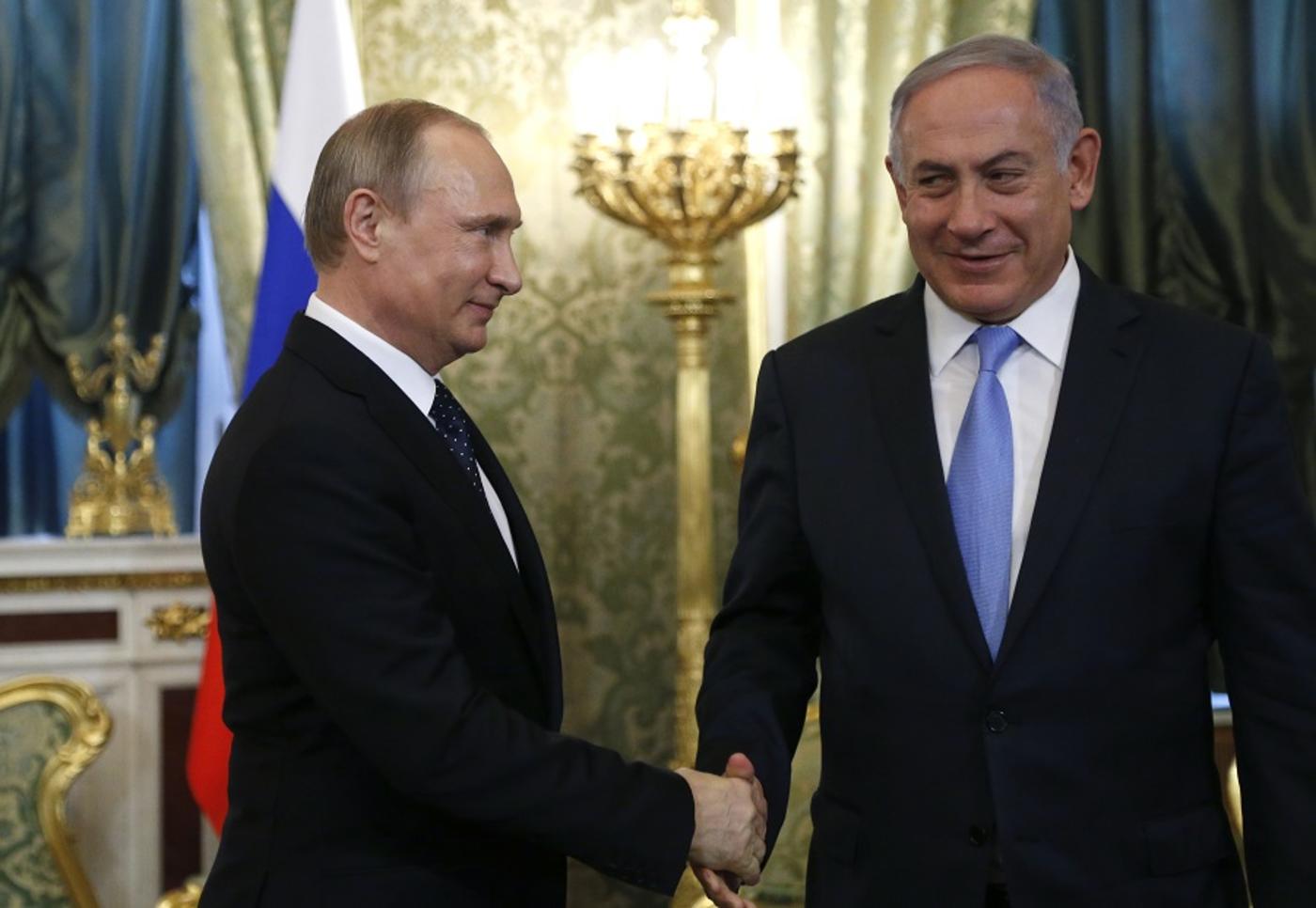 This week witnessed one of the more bizarre and unexplained events in the recent annals of Israel’s foreign and security policy. Around the highly fortified underground nuclear enrichment plant at Fordow, Iran deployed its Russian made S-300 advanced air defence systems. The USA expressed its “concern,” but Israel remained silent. The local media reported it, but Israel’s leaders said nothing. That stands in sharp contrast to the vociferous, almost hysterical calls, led by Prime Minister Benjamin Netanyahu against any small move of a military nature by Iran.

In the past decade, Israel fought tooth and nail against the sale of these systems to Iran, using all its levers to prevent it. Israel sent its emissaries to Moscow, offered to reciprocate by selling technology to build drones, and used its AIPAC lobbyists and its influence to rally US support. It presented the deal as an “existential” threat to its security. But now nothing; just disturbing silence.

It seems that Israeli muteness has less to do with Iran, which is considered its number one enemy and remains high on its intelligence agenda, and more to do with Russia. In the past year, Israel and Russia, or to be more precise Prime Minister Benjamin Netanyahu and President Vladimir Putin, have been on a flirtatious course that has puzzled Israeli and Middle Eastern pundits and raised alarm bells in Washington.

Since August 2015, Netanyahu has travelled to Moscow four times for meetings with Putin, more than he has had with any other world leader. Just for comparison, during that period Netanyahu met with US President Barack Obama just once, in November 2015. And do not be mistaken - the US is still considered Israel’s best strategic ally and its guardian angel, with an annual average financial infusion of $3.5 billion.

In one of the meetings, Putin showed his gratitude in an unusual gesture. He went with the Israeli prime minister and his over-influential wife Sarah to a ballet performance at the Bolshoi Theatre.

Between meetings, Netanyahu has called Putin over the phone at least 10 times to brief, consult and exchange estimates. Probably there were more phone conversations than the Prime Minister Office has announced for the public record. The most recent phone conversation between the two was at the end of August.

It is hard to understand and explain this unusual, wonderful friendship.

Netanyahu’s first pilgrimage to Moscow had its logic. It was in September 2015, when Israel panicked after realising that Russia had deployed its warplanes in Syria and had begun bombing rebel positions in support of the Bashar al-Assad regime. Netanyahu tried to persuade Putin that Russian planes should not fly near the Israeli-Syrian border in the Golan Heights. In other words, the Israeli leader wanted to create a “no-fly zone” near the border and allow the Israeli Air Force (IAF) to continue enjoying its air monopoly and superiority in the Syrian arena.

Since the beginning of the civil war five-and-a-half years ago, Israeli warplanes have attacked at least 15 times weapon depots and convoys shipping land-to-air-missiles, long-range ground missiles, and land-to-sea missiles from Syria to Hezbollah. The weak Syrian air force and its air defences did not even try to challenge the mighty Israeli air force.

Putin rejected Netanyahu’s request, arguing that its pilots would bomb all anti-government rebels all over Syria, including near the Israeli border, where Nusra Front, Daesh (Islamic State) and moderate rebel groups have bases. But the Russian president agreed at the meeting that the two countries create a joint mechanism of “de-confliction” to prevent mistaken air and ground clashes between pilots and air defence systems of Israel and Russia.

But since the establishment of the coordination, which is still in place and operates well, there was no need for any further meetings between the leaders. The de-confliction arrangement is operated by senior officers from both armies. Yet Netanyahu kept flying to see Putin.

Aside from issuing laconic statements, the Israeli prime minister has never provided any elaborate and genuine report or explanation, not even to his cabinet ministers or to the Knesset (parliament), let alone to the public, about the nature and content of his intimate relations with Putin. It is not a secret in international relations that with Putin there are no free meals. Surely Netanyahu and Israel are paying in one way or another for Putin’s hospitality and public gesticulations that the Israeli prime minister is among his favourite world leaders.

But so far no one has managed to decipher the currency Israel pays back to Russia.

In the past, in order to please Russia, Israel provided licences for its advanced technologies. For example, after the end of the Russian-Georgian war in 2008, Russia expressed its anger that Israel sold weapons to Georgia. To compensate Russia, Israel licensed Russia to produce Israeli-made drones. Soon Russia began producing its own version of the drones based on Israeli technology.

As a former KGB officer, Putin is a shrewd, cunning leader and master of deception. These skills have to be remembered when the friendship between the two is seemingly flourishing.

Via the Russian channel, Israel inadvertently finds itself in bed with strange bedfellows – its sworn enemies – Iran and Hezbollah. Russia, Iran and Hezbollah are operating a joint command room. It won't surprise anyone if one day it will be found that some of the de-conflicting and other secrets which Israel has shared with Russia made their way to the joint command room.

Indeed, the US is noting the Israeli-Russian honeymoon with growing concern. The Obama administration is well aware that Russian strategic goals in Syria are not only to save the Assad regime and keep it in power - at least over some parts of the country - and to enhance its position in the Middle East, but also to create a wedge between the US and its traditional allies in the area, Israel included. In that sense, willingly or not, Israel is manipulated by Russia.

Furthermore, despite the de-conflicting mechanism and Putin’s promises to Netanyahu not to violate Israeli air space, Russian warplanes and drones have occasionally – at least 10 times in the past year – infiltrated Israel. Though the Russian military command explained to its Israel counterparts that all these incidents were just human mistakes, very few believe it.

Israeli defence experts believe that the Russian flights were espionage missions and efforts to test the Israeli air defence’s readiness and state of alert. Once again, it should not be ruled out that the information gleaned during these sorties was transferred and shared with Russian allies and Israel’s enemies.

In some cases Israel scrambled its warplanes but held its guns. Unlike Turkey, which a few months ago shot down a Russian warplane that encroached on its territory, Israel swallowed its pride and did not try to shoot down or intercept the Russian intruders.

Not only has Israel never complained about Russian hostile actions; one can only imagine based on past precedents what would have been the Israeli reaction if the US had done something even remotely similar to the Russian actions. No doubt Netanyahu and his ministers would have raised hell and reprimanded the US for its “treachery,” as they did in the past.

Most loud in this outcry would be the Soviet-born new Defence Minister Avigdor Lieberman, who has constantly advocated a more “balanced” policy and is considered a good friend of Belarus leader Alexander Lukashenko, the last dictator in Europe, who is also a good friend of Putin.

One of Netanyahu’s tirades against Obama concerned the nuclear deal signed between the 5+1 powers and Iran. Netanyahu time and again tried to sabotage the agreement and blamed the US for what he defined as “a bad deal”.

The Israeli prime minister, however, has forgotten to mention that Putin’s Russia is among the world powers that has supported the deal and pressured world powers to sign it. Netanyahu also has complained that by the US signing the deal, lifting sanctions and releasing hundreds of billions of dollars, Iran is able to fund the purchase of weapons. But once again, he is omitting the fact that a major beneficiary of the Iranian military shopping spree is Russia, which sells its most advanced weapons, including warplanes and S-300 air defence systems.

One can conclude that while Netanyahu and his ministers have the chutzpa to criticise the US, still Israel’s best strategic ally, they stay away from any controversy with Russia, fearing the wrath of Putin.

Yet by heating up its relations with Russia to a high temperature, Israel is also cooling it with Washington. It is a dangerous game, increasing the suspicions in Washington that Netanyahu in particular, and his cabinet, is an ungrateful ally. Sooner or later it will backfire and affect the still-close cooperation between the military and intelligence communities of the two countries.