Sudan and Egypt: Friends or foes?

Amna Bagadi
Ideologically opposed, are Sisi and Bashir now using each other to legitimise their own regional and national interests? 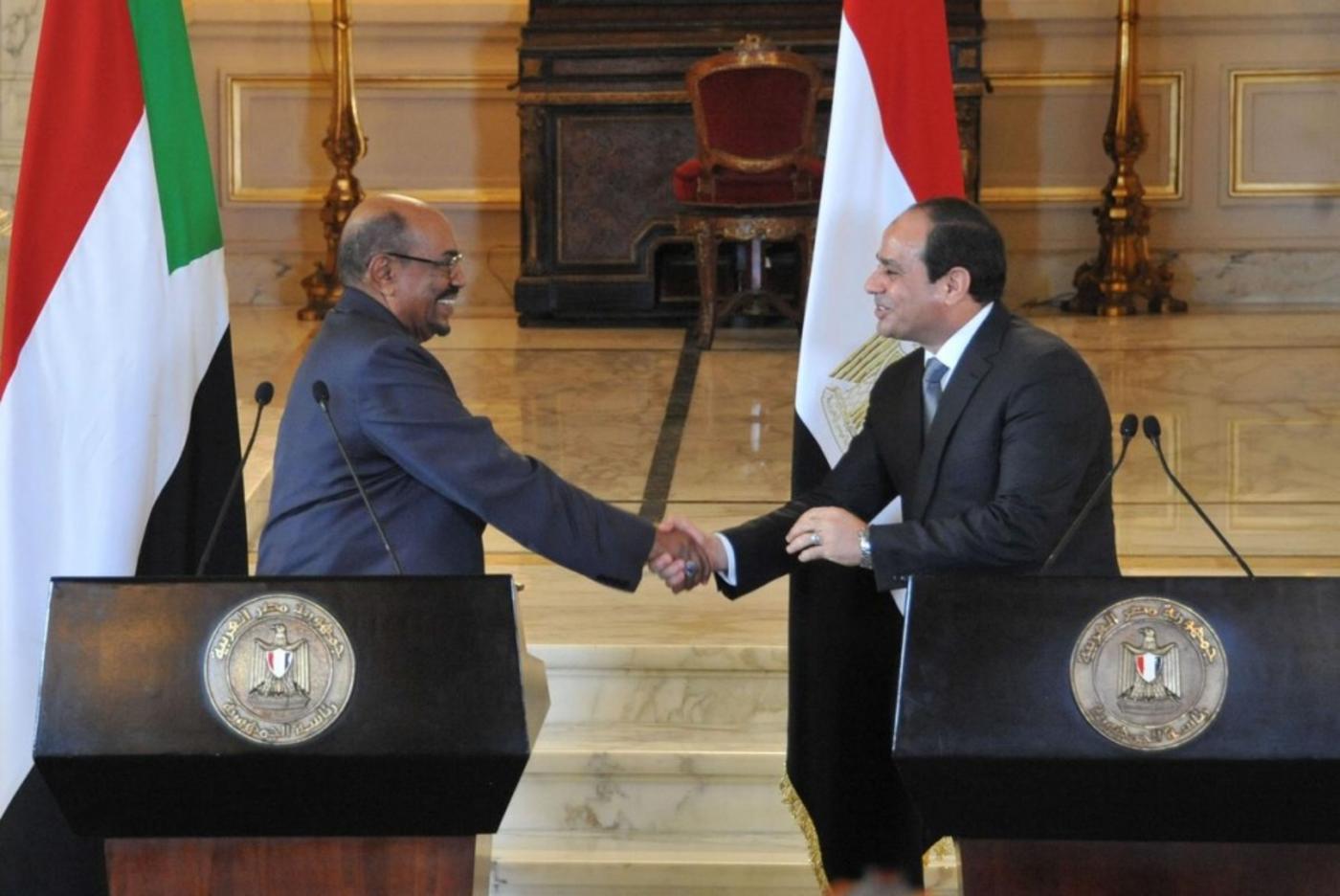 The budding new relationship between Sudanese and Egyptian leaders is proving to be a curious one.

Sudanese President, Omar al-Bashir and his Egyptian counterpart, Abdel Fatah al-Sisi met on Saturday in Cairo, and agreed to form a joint committee to deal with bilateral relations on the top presidential level. This followed Sisi’s first visit to Khartoum in June.

Reflective of the complexity and confusion in the wider region, where alliances are forged, broken and forged again as circumstances change, these two neighbouring countries, historically intertwined since antiquity, have been at odds after Egypt’s Mohammed Morsi was ousted. Each side has also been accused of arming and supporting rebels on either side of the Islamist/nationalist regional proxy war, particularly in Libya.

The Sudanese regime, led by an Islamist movement is accused of supporting Islamist rebels in Libya, Sinai and beyond. Sisi has continued a crackdown on the Muslim Brotherhood in Egypt since he took power.

At the meeting, the two leaders reportedly discussed outstanding issues between the two countries, such as disputed border territory, opening a land port to strengthen economic ties and fighting terrorism.

Sudanese political analyst, Ali Abdul Rahman said, “These political tensions are transitional and do no express the countries’ strategic leanings. The relationship between Sudan and Egypt is far greater than the sum of their ruler’s political disputes.”

While the tensions may be transitional, the question remains: “Why are these two countries, ideologically opposed, now seeking to form new ties? What could they possibly be trying to gain?

Sudan, an increasingly isolated state, has struggled to maintain relationships on the international stage. Following the arrest warrant issued in 2009 against Bashir by the International Criminal Court for war crimes in Darfur, the president has found himself with less friends and increasingly more enemies, both inside and outside the country. The Sudanese president is limited in where he can go and with whom the country can trade.

Unsure where to turn, the beleaguered leader is desperate. Accused of economic mismanagement and corruption, impoverishing the state and sustaining the nation in continued conflict, unpopular in his own country, Bashir is fighting opposition parties, rebel groups and trying to keep a lid on an increasingly angry and destitute populace.

Bashir’s own party is beset with internal divisions with many voicing opposition to his continued candidacy in next year’s presidential election.

The Sudanese president feels an urgency to form relationships to legitimise his government and maintain a grip on power.

Living day to day with a state on the verge of economic collapse, Bashir is grateful for an alliance with Egypt to divert from crises at home, and give him something to do as he trudges along until next month, next year and then the next presidential election - or until he manages to somehow flee the country and escape arrest or a fresh coup.

Egyptian President Sisi took power after the leader of the Muslim Brotherhood - the first democratically elected president following the Arab Spring - Mohammed Morsi was ousted. He was sworn into power in June after presidential elections.

Sisi has vowed to end the Muslim Brotherhood. In an ongoing crackdown on the movement, many members have been arrested and some killed in clashes with the military.

He claims to stand for all religious persuasions and to protect Egypt from politically Islamic forces, although both Brotherhood members and some pro-democracy activists strongly disagree.

Seen to be siding with Israel during the 2014 Israel-Gaza war, Sisi was criticised by some Muslim countries for standing against Hamas, an Islamist movement. Egypt has traditionally been a mediator between Israel and Hamas in talks, but was seen to be conceding to Israel during the summer.

All of which makes the decision to begin top ministerial relations with the Sudanese government even more peculiar.

Bashir has recently been trying to make links with countries that had turned their backs on Khartoum’s regime. Previously linked with Qatar, it appears the president is attempting to shift alliances away from Doha and back towards Saudi Arabia and Egypt.

Qatar’s own problems following accusations of supporting Islamist movements - including the Muslim Brotherhood in Egypt - seem to be causing it to cool its relations with Khartoum. Earlier this year the Qatari Emir himself flew to Khartoum to pledge millions of dollars. The Qatari government is unlikely to want to be seen doing similar while it currently denies these links with said movements.

In Libya, Sudan has been accused of arming Islamist rebels fighting the Libyan army. Egypt allegedly sent a plane to bomb those same rebels. At their meeting, Bashir reportedly said he would help Egypt to fight terrorism and stop the flow of arms to Islamist rebels in Sinai and Libya.

In July this year, Israel neither confirmed nor denied bombing a weapons factory in Khartoum. It had previously bombed a convoy said to be carrying weapons through Egypt to Hamas in Gaza.

Previously supporting opposing sides in the region, Egypt and Sudan are putting their divisions to one side, conceivably for similar reasons.

The two leaders seem to be using each other to legitimise and strengthen their respective power.

Egypt, sensing Khartoum’s weakness, is trying to negotiate on land, and gain support against the Ethiopian Dam and on security matters, while it has the ability to coax concessions out of a besieged government.

While the Egyptian leader, supported by some in the country, but also facing internal opposition, is using Khartoum as a show of strength, to prove it has the strongest influence in the region as it builds an alliance against “terrorism.”

Perhaps there are more similarities between the two leaders than either would like to admit.

-Amna Bagadi is a freelance writer currently based in the UK. She previously worked at Al Jazeera English and Reuters, along with NGOs in Sudan and the Netherlands.