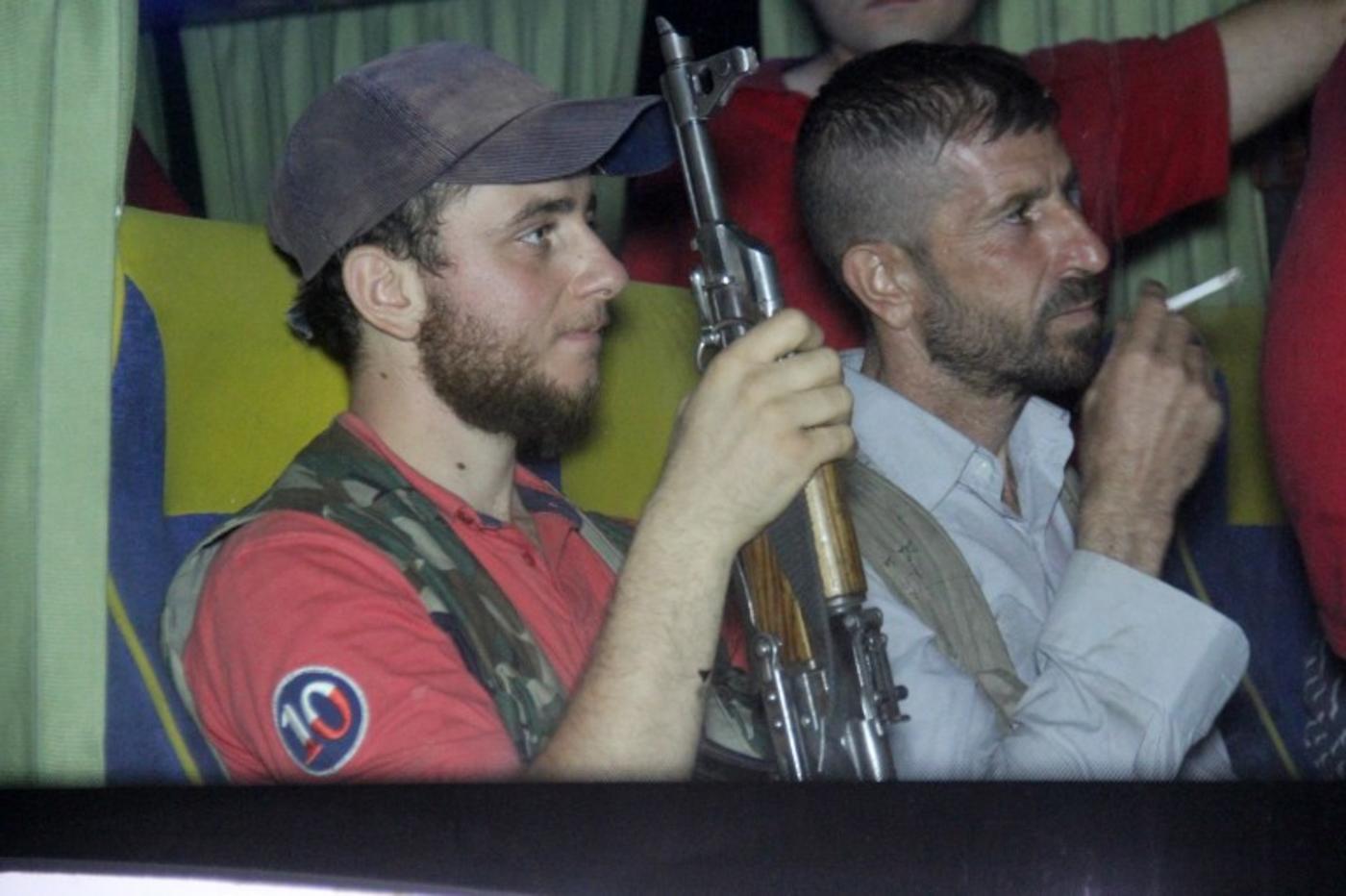 Around 700 rebel fighters from Liwa Shuhada al-Islam, packed into dozens of coaches usually reserved for tourists, rolled into the opposition stronghold of Idlib early on Sunday morning. From the besieged Damascene suburb of Daraya, the fighters were provided safe passage by the regime of Bashar al-Assad after they signed an instrument of surrender.

The deal included the lifting of the siege of Daraya and safe passage for its residents, on the condition of a rebel surrender. Rebels were also forced to give up heavy weaponry and artillery, but were allowed to keep their small arms.

Despite this, they were greeted as heroes; the mere fact that they, and the other rebel groups in Daraya, have even survived is a victory in itself. Abo Jamal, the leader of Shuhada al-Islam, was lifted onto the shoulders of opposition fighters and proclaimed that the revolution would continue until “Aleppo, the coast [Latakia], and Idlib have united to liberate Damascus”.

The suburb of Daraya had been besieged for four years prior to last week’s deal. So intense was the siege that residents were forced to survive on grass and soup, and there are even tales of children relishing their first taste of fresh fruit and vegetables after leaving Daraya.

With such isolation imposed on them, Shuhada al-Islam found it particularly difficult to establish a foothold. Weapons were difficult to come by, and even after being vetted by the CIA-supervised operations room in Amman and receiving a very small number of TOW anti-tank missiles, the question of a reliable supply route into the suburb lingered.

The nature of urban warfare also played a critical role in the development of Daraya’s resistance. The enclave was besieged by the Syrian Arab Army’s elite Fourth Armoured Division, an Alawite-majority division that is regarded as one of the best trained and equipped units at the regime’s disposal. It is also headed by Maher al-Assad, younger brother of the president. Videos posted by Shuhada al-Islam show capable urban fighters – a skill unique in Syria, and one that is likely to be of use as the battle to liberate the rest of Aleppo from regime control intensifies.

Abo Jamal is modern Syria’s Leonidas I, and his men the equivalent of the 7,000 Greeks who famously held off the 100,000 strong Persian army

Jamal’s status, and Shuhada al-Islam’s more broadly, is now cemented as legendary amongst Syria’s opposition for their military heroics. He is modern Syria’s Leonidas I, and his men the equivalent of the 7,000 Greeks who famously held off the 100,000 strong Persian army for seven days. Prior to the revolution he was a talented officer who worked in the elite military academy of Aleppo, and his skills as a military tactician were a critical factor in Daraya’s resistance.

When asked whether or not Shuhada al-Islam were likely to merge with one of the larger rebels groups active in Syria, a senior figure within the group replied “my friend, I am sure Shuhada al-Islam will continue. None of us want to leave this unit. We are going to continue fighting the regime, and come back to Daraya, and topple the regime."

But if "resistance" is the mot-de-jour from Daraya, then "merger" is surely the term for northern Syria. A significant merger of rebels groups is widely believed to lurk around the corner. The rebranding of Jabhat al-Nusra as Jabhat Fatah al-Sham (JFS) and ostensible disaffiliation from al-Qaeda has set the stage for this merger. Should such a merger include JFS, Ahrar al-Sham and Harakat Nour al-Din al-Zenki, as rumours have suggested it will, it could potentially boast upwards of 40,000 fighters unified under a single command structure.

Further to this, any sort of merger would require serious ideological concession from Shuhada al-Islam. The group’s roots lie in what Thomas Pierret, a senior lecturer in contemporary Islam at the University of Edinburgh, terms “local Islam” – a non-Salafi form of Islam that was popular within Syria’s middle class before the uprising.

Formerly part of the Free Syrian Army, their outlook is “distinctly national – as opposed to Salafi-jihadism’s transnational approach”. Their presence in Daraya was notable for their obedience to the town’s civil governance apparatus, which is to say it was a group at the service of the people, something described by Syrian civil rights activist Razan Zaitouneh as an “exemplary model for the future of Syria”.

There is also immense anger at the Free Syrian Army-aligned Southern Front (SF) in Daraa. Many hold their idleness against the government forces as the primary factor in freeing up regime forces to tighten the siege on Daraya to breaking point. As Pierret says: “Given their ideological orientation, they should normally be attracted to FSA affiliates or mildly Islamist groups rather than to Salafi and Jihadi factions, but: they were clearly let down by their own FSA alliance (The Southern Front), which by freezing operations in Daraa and Quneitra for months, allowed the regime to withdraw manpower from the south and use it against Daraya”. This is an episode that will not be forgotten any time soon, and even has the potential to push them into the arms of the Salafists of northern Syria.

Perhaps an indicator of things to come was the presence of Sheikh Abdallah Muhammad al-Muhaysini, the Saudi cleric who is hugely influential amongst Syria’s Salafists to the extent that one observer has described him as being treated “like a rock star”. True to rock star form, as Daraya’s rebels touched down in Idlib, he was there to greet them – and even to pose for selfies. He is undeniably pro-al-Qaeda, but his status as a cult opposition cleric in the battle for freedom in Syria saw him warmly embraced by Daraya’s rebels.

Islamist leaders in northern Syria know it would be especially foolish to pick a quarrel with Daraya’s heroes, but with relatively few fighters it is highly likely that actors in the liberated areas of Aleppo and Idlib will attempt to co-opt a group whose urban combat capabilities might help to tip the balance in the battle for Aleppo. The question remains whether Shuhada al-Islam will remain true to their revolutionary instincts or material needs will force them into ideological concessions.

Photo: Rebel fighters and their families are seen on buses upon their arrival in the Qalaat al-Madiq village in the province of Hama early on 27 August 2016, after being evacuated from the town of Daraya under a deal agreed between the government and opposition fighters after a four-year army siege. (AFP)