Trump and Netanyahu: Mired in the swamp

Nada Elia
Walls, a Muslim ban, racial supremacy? When Netanyahu visits Trump, they will have a lot in common to discuss. That's good news for activists 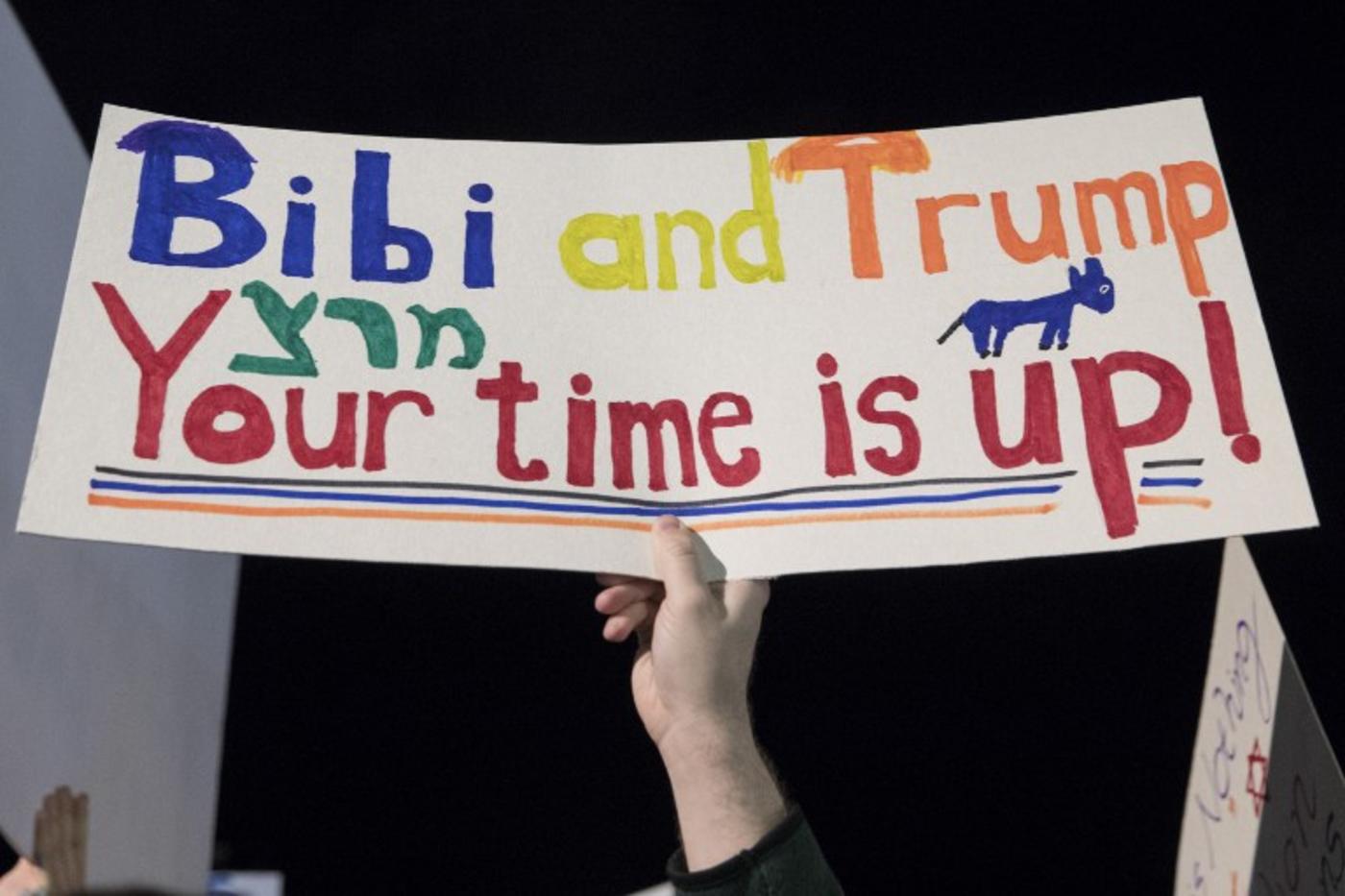 For a president who promised a prompt and complete departure from the previous administration’s policies, and to drain “the swamp” that is Washington, DC, Donald Trump has so far failed to deliver much.

Most analysts have observed that large-scale deportations, the Muslim registry, the Wall, or close collaboration with Israel are by no means Trump originals. All of these ideas predated him. His predecessors were simply smarter in carrying out their policies. His own clumsy attempts at implementing them have so far been rebuked.

READ: Get mad at Trump- but you can't blame him for all that's wrong with America

Former president Barack Obama, for example, was charismatic, with charming humility and a “model family” that won millions over, even as he drone-bombed thousands and deported millions.

Trump is a vulgar, bellicose, sexist loudmouth, and the focused attention he thought that he would enjoy is proving counter-productive, a hindrance to his would-be grandiose plans.

His own boastful flourish to the Washington Post, vowing “insurance for everybody . . .  much less expensive, and much better,” dealt a severe blow to his biggest campaign pledge, the repeal of the Affordable Care Act, because it promised something his party would never approve.

And the blatant misogyny in which he boasted of sexually assaulting women has made women and men across the country recoil in horror.

Less obvious to anyone who was not already paying close attention to these issues is the fact that even his repulsive sexism is not a departure from what feminists have long called the “rape culture” in the US.

Trump has not innovated much, with one very significant exception, albeit unintentional: he has mobilised millions, bringing Americans out into the streets as never before

Similarly, public education has been sliding down a steep incline for years, as most public schooling advocates have long pointed out.

Even the seven countries on Trump’s Muslim ban were originally flagged by his predecessor, Barack Obama.

So far, Trump has not innovated much, with one very significant exception, albeit unintentional: he has mobilised millions, bringing Americans out into the streets who had never protested before. The majority of the American people have woken up from their trance, and they’re determined to resist, and “Stop Trump”.

From petitions asking him to resign (really?) to calls for his impeachment to direct action to block his executive orders, Trump has achieved what few other US presidents could: he has unified a hitherto fragmented opposition, as people come together to reject his hateful fatwas.

Next week, Trump is scheduled to meet Israeli Prime Minister Benjamin “Bibi” Netanyahu. And while he has surrounded himself with anti-Semitic white supremacists, Trump will no doubt get along just fine with Bibi, because the two are mirror images of each other, leaders of hateful, racist, violent states determined to keep vulnerable communities underfoot, if not completely out.

The question, however, is whether he will continue on the path of previous administrations, as he has been doing so far, or change course drastically. Another one of Trump’s campaign promises was to move the US embassy to Jerusalem.

Here again, Trump seems to have bitten off more than he can chew, as political analysts were quick to point out that even Zionist Israelis are not eager about this move, which would set in motion too many unknowns disrupting a fragile status quo that serves them well.

In the words of Israeli columnist Akiva Eldar: "I don’t know what’s in it for Trump…. If you talk to serious people, if you ask the secret service, they say don't do it…. They don't think it's worth it. Everything is so fragile right now."

The settlements are another issue always discussed at meetings between the US and Israel, and while some have noted that the Trump administration has departed from all previous ones in stating that the illegal settlements are not necessarily an impediment to peace, actions do speak louder than words.

The sad reality is that previous administrations, including the Obama administration, have never held Israel accountable for these violations of international law, continuing instead to offer it generous aid packages.

And it is to be fully expected that Trump will be reasserting, rather than deviating from, the longstanding pattern of upholding the US-Israeli “shared values” and “strategic ties”, and repeating that Israel is “our closest ally in the region”.

Indeed, Israel is proving to be a role model for Trump. “Do walls work? Ask Israel,” Trump seems to enjoy asking, in defence of the “big beautiful wall” he wants to complete on the US-Mexico border.

From Palestine to Mexico

The continuity rather than departure from the longstanding pattern of US-Israeli relations is working in favour of Palestinians and their allies.

When Palestinians and our allies point out to newly mobilised Americans that Israel has had a Muslim ban for 70 years, many are reconsidering their once unquestioning acceptance of the Zionist narrative

As more people oppose Trump, and finally grasp the multiple connections between the struggles of the Palestinians and those of indigenous Americans, African Americans, immigrants and refugees, they are also breaking free from the Zionist hold on their view of the situation in Palestine.

Chants and posters that say “From Palestine to Mexico, all walls must go” and “No Ban, No Wall, Refugees are Welcome Here”, establish a connection between xenophobia in the US and Israel.

When Palestinians and our allies point out to newly-mobilised Americans that Israel has had a Muslim ban for 70 years, and that the Palestinians are a majority refugee people because Israel is denying them the right of return, many are reconsidering their once unquestioning acceptance of the Zionist narrative.

The dissonance between supporting refugees in the US, but not Israel, between calling for boycotts of Trump’s businesses and the businesses of his partners, but denouncing the Palestinian call for a boycott of institutions that benefit from the violation of the human rights of the Palestinian people is becoming untenable.

This disconnect became obvious last month when the Modern Language Association (MLA), a large US scholarly group for professors of language and literature, voted against endorsing the Boycott, Divestment and Sanctions Movement (BDS) while, at the very same meeting, expressing opposition to Trump, who has embraced and celebrated the worst aspects of Zionism.

A group of scholars who are members of the MLA and active in promoting the academic boycott of Israel recently issued a statement clarifying that “supporting the growing academic boycott movement is the only coherent position that brings together unambiguous opposition to the Trump administration and to Israel.

"Professional associations and university administrators can no longer hide behind positions of ostensible neutrality or impartiality on Israel-Palestine, when they are all rushing to make public statements against Trump’s policies.”

Since Trump is not departing from the course of previous administrations, the activism we have been engaging in for years now, as we seek justice for various vulnerable communities, needs to accelerate, rather than change drastically. We can capitalise on the mobilised resistance, as we draw the parallels:

Against walls? Israel has one.

Against the Muslim ban? Israel has one.

Against racial supremacy? Israel’s Zionism is just that.

Solidarity with global refugees? The Palestinians have been displaced and denied the right of return for 70 years.

For now, it seems that Trump is wallowing swine-like in the swamp he had pledged to drain. But if we organise strategically, then the alliances we have been forging over the years, the connections we have been diligently making between settler-colonialism from Standing Rock to Palestine, between hyper-militarisation and state violence from Ferguson to Gaza, will finally bear fruit.

Many of us have been dreaming of another world all our lives. Others are only now waking up to that need. We can now come together and bring about the desired change, a genuine departure from, rather than acceleration of, the ills of our society.

Photo: A demonstrator holds a placard during a protest outside the US embassy  in Tel-Aviv against President Donald Trump on 21 January 2017 (AFP)