Jared Kushner: The colonial mindset behind his so-called 'peace plan'

Marc Owen Jones
The Trump deal, designed to bolster the state of Israel, was never going to be accepted by Palestinians - and that was part of the plan 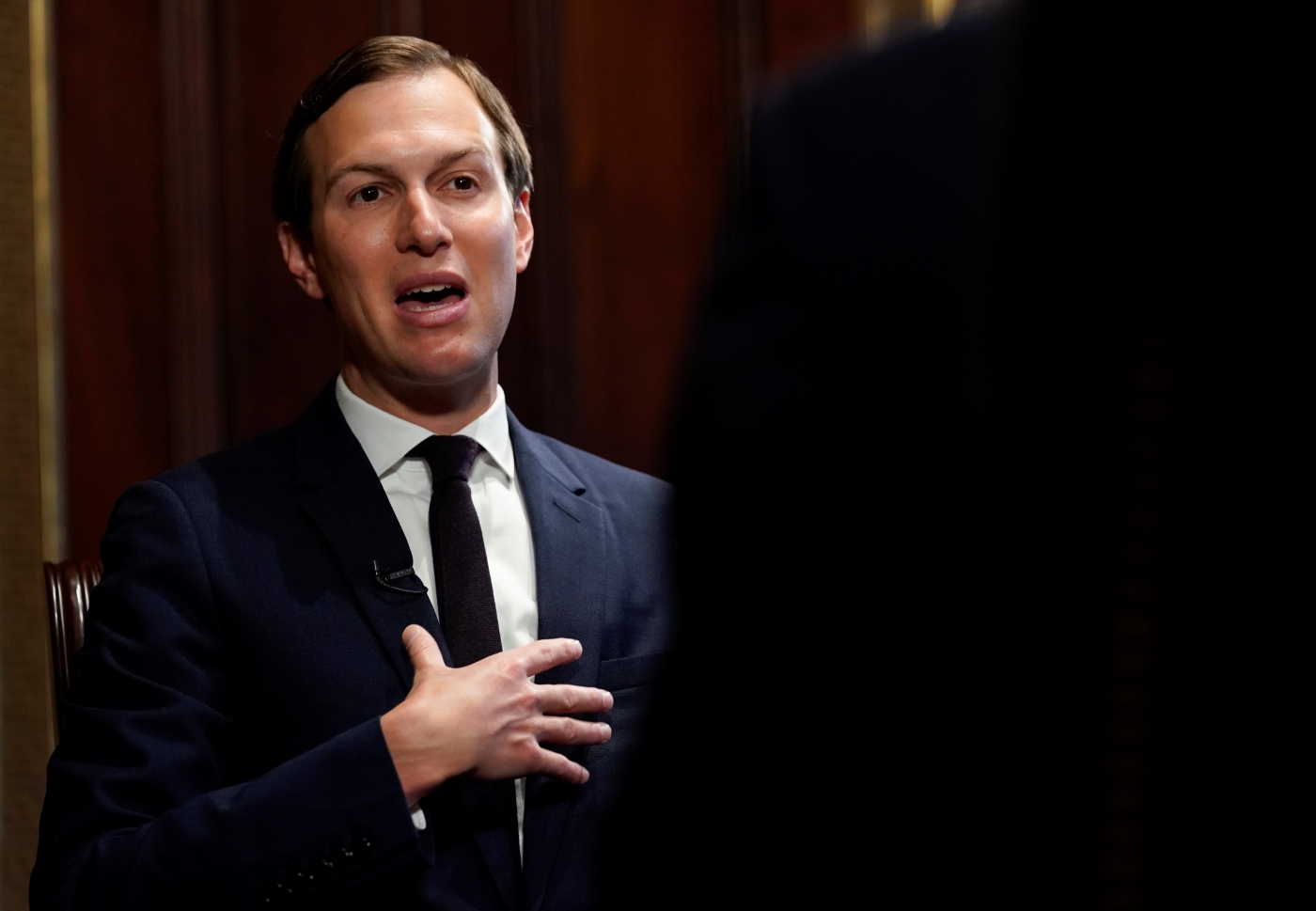 You do not need to read the text of the “deal of the century” to understand what it means.

To get a much clearer understanding, all you need is to watch one of US President Donald Trump adviser Jared Kushner’s subsequent interviews. It provides a much quicker, more revealing insight into the anti-Palestinian and Islamophobic tenets of the US plan.

Author Aldous Huxley once said: “That men do not learn very much from the lessons of history is the most important of all the lessons of history.” Kushner begs to differ. Speaking to CNN’s Christiane Amanpour, he implored the world to “divorce” itself from “all of the history” in order to examine the deal.

If Kushner, who says he has read at least 25 books on the topic, is oblivious to the importance of history, he is even more oblivious to the fact that his own spiel is saturated with historical narratives of the Israeli state - narratives that have been carefully constructed to justify the abhorrent treatment of the Palestinian population.

Kusher pointed to “five million Palestinians who are really trapped because of bad leadership”. He then used the trope of Palestinian emotionality (as opposed to reason), denouncing the Palestinian leaders calling for a “day of rage”.

By deluding himself into believing that we can simply divorce ourselves from history, Kushner reveals his own obliviousness to the settler-colonial ideology that his views represent

Kushner’s rhetoric that the plight of Palestinians is down to bad leadership is far from ahistorical. He adopts the framework used by Israeli PR practitioners to absolve the state of responsibility for its historic occupation of Palestine, suggesting that Palestinians are victims of their own leadership, and not of the great state of Israel.

By deluding himself into believing that we can simply divorce ourselves from history, Kushner reveals his own obliviousness to the settler-colonial ideology that his views represent. When Palestinians are not the victims of their intransigent leaders, they are busy engineering their own downfall by squandering “opportunities”.

Everything about Kushner’s rhetoric is designed to portray Palestinians as unreasonable, reactionary agents of their own doom. When he is not victim-blaming, he is engaging in emotional blackmail: “If they screw this up, I think that they will have a very hard time looking the international community in the face, saying they’re victims, saying they have rights.”

When you get the chance to interview Jared Kushner but don't challenge him in a single question. Amr Adib, this is the map they announced already, and you should have shown him the maps that Palestinians have for the history of their land, just to present the absent side. https://t.co/d8QtcsAA9G

For Kushner, the ability of Palestinians to see themselves as victims, and as humans with rights, is contingent on accepting the US deal. Refusal to comply with the neocolonial imposition of his own vision of the Middle East voids any Palestinian claim to victimhood.

Kushner paternalistically positions himself as the ultimate arbiter of the legitimate victim. You must obey his terms; refuse the deal and lose your right to be treated as human. Only if Palestinians obey him, can they live what Kushner condescendingly describes as an "amazing life", as if he were freeing rehabilitated hedgehogs into the wild.

As Kushner’s diatribe gathers pace, it reveals insights into his dichotomous views on Islam, parsing Palestinians into the binaries of “good” and “bad” Muslim - all couched in the rhetoric of a slumlord renovating a new housing development: “We’re doing a good job of cleaning out a lot of the mosques, and restoring the ideology.” All this can be fixed by Kushner-the-developer’s "masterplan".

“We” clearly refers to the colonising force bringing enlightenment, stability and security. Kushner’s rhetoric follows the “logic of elimination” integral to the settler-colonial state. The deviant, reactionary, emotional, primitive and ignorant Palestinians must be “restored” to an acceptable ideology, one conducive to the expansionist aims of the settler-colonial state.

If Palestinians reject his plan, Kushner told CNN, “they’re going to screw up another opportunity, like they’ve screwed up every other opportunity they’ve ever had in their existence.” He hardly needed to add, “…the wretched, unregenerate brutes.” https://t.co/bZbGki20EM

In his interview with Egyptian broadcaster Amr Adib, Kushner quickly abandons any attempts to attribute parity of responsibility to "both sides" in regards to the Israeli occupation. Instead, he talks of the radicalisation of Hamas, the role of Palestine in Iranian aggression, and Palestinian attacks on "peaceful Israelis".

No mention is made of the asymmetry of the Israeli occupation, the thousands of peaceful Palestinians killed by Israeli snipers and bombs. Of course this is deliberate, because in Kushner’s Islamophobic world view, the Palestinian is by default the aggressor, not the peaceful victim.

Of course Kushner, and some media outlets, have attempted to hide behind the argument of “pragmatism”, implying a well-intentioned compromise that - while not ideal - is still better than the existing status quo, and more or less amenable to both parties.

But there is nothing pragmatic about this deal. Palestinians were never going to accept it, yet they will bear the brunt, once again, for their “failure” to notice Israeli and US-mediated generosity, compromise and pragmatism. To even call it the “deal of the century” is a mistake, indulging the whole purpose of this exercise, which is one of rhetoric. It is not a “peace plan”, but rather an Israeli security policy.

Kushner is careful to frame everything as a "better life" (an extremely relative term) for the Palestinians, and a secure life for the Israelis.

The whole project has been a PR exercise from start to finish, further stigmatising and discrediting Palestinians, while providing a roadmap to legitimise Israel’s policy of land expropriation and encroachment. Conveniently, it comes at a time that detracts attention from US President Donald Trump’s impeachment and Israeli Prime Minister Benjamin Netanyahu’s corruption charges.

Kushner’s "deal" is merely an attempt to stigmatise Palestinians further by providing media coverage and fanfare about their rejection of a “solution”, which is positioned as a fait accompli. It fits the modus operandi of the poorly led, radical Palestinians, who, as a sardonic Vanity Fair piece noted, “have never done anything right in their sad, pathetic lives”.