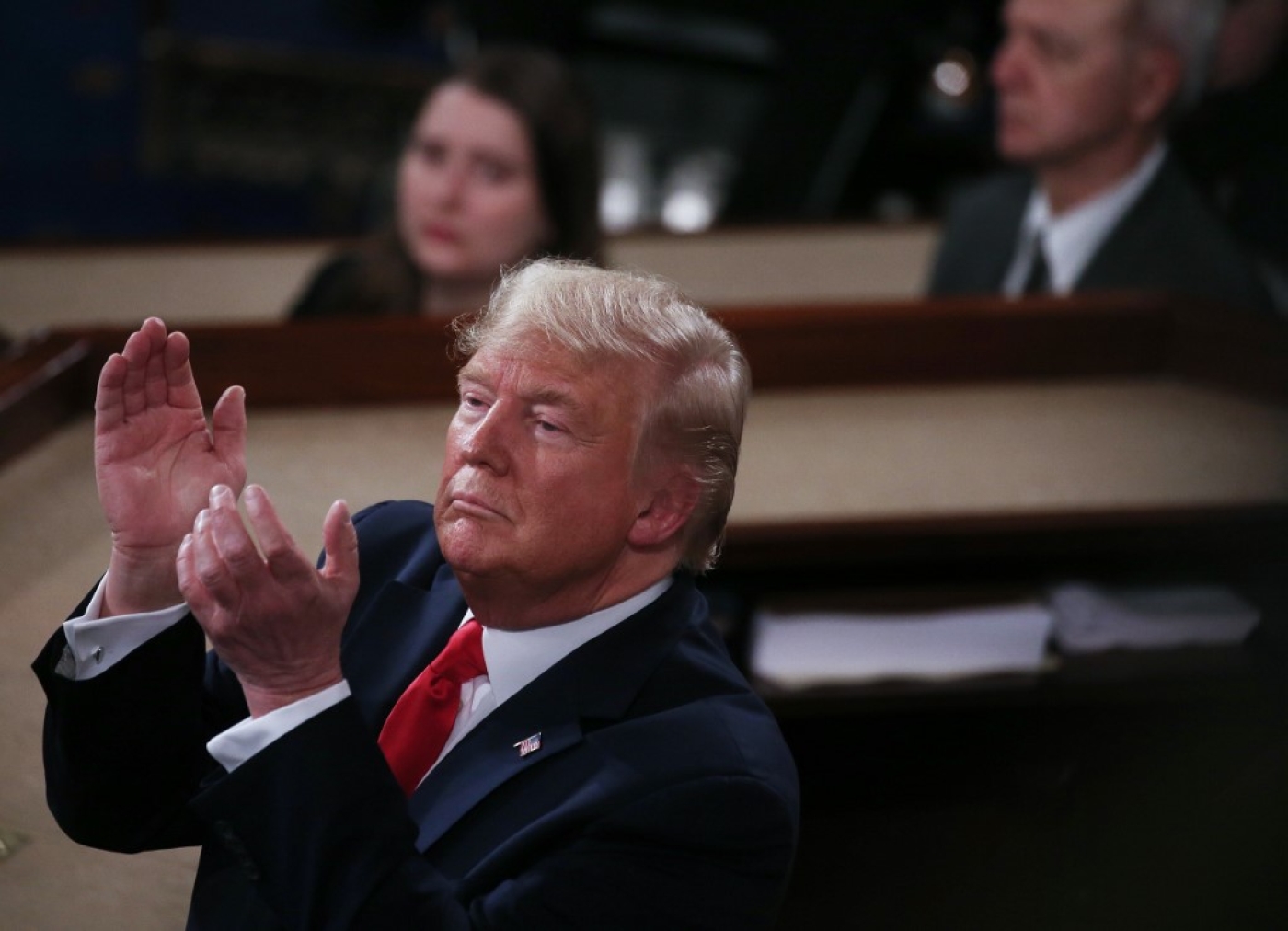 Like many Americans, I tuned in to watch President Donald Trump’s State of the Union address on Tuesday night. But as a Muslim Arab American, I knew from the get-go that whatever he would say, it would not match my experience living in the United States.

This is because Trump’s speech was geared only towards his base: white Christian Republican Americans. It projected power, control, hegemony, brute force and imperialism - or in other words, his conception of what makes America “great”.

Trump’s address began by focusing on the domestic front, including employment, the stock market, trade deals and education. But rather than simply speaking to all of his "accomplishments", Trump strategically tokenised audience members and shared their stories for a particular reason: to demonstrate that his administration harbours no animosity towards people of colour, and to tie their successes directly to him.

To gain stature in a white supremacist country, people of colour must participate in the criminalisation of their own community members

This included a young African American girl, named Janiyah Davis, to whom he awarded an opportunity scholarship that would allow her to select the school she wanted to attend, and an African-American army veteran who went from being a drug addict to a successful businessman - which Trump attributed to opportunity zones. Trump’s speech also sought to symbolically define what success means for people of colour.

To this end, he uplifted the deputy chief of border patrol, Raul Ortiz, for seizing more than 200,000 pounds of poisonous narcotics, arresting more than 3,000 human smugglers, and rescuing more than 2,000 migrants. Congratulating Ortiz made one point entirely clear: to gain stature in a white supremacist country, people of colour must participate in the criminalisation of their own community members and legitimise the institutions inflicting violence on them.

On religious freedom, Trump unabashedly proclaimed that his administration was “defending religious liberty” by not tearing down crosses. While the US has long been hailed as a country where religious freedom is foundational, Trump’s vision might come closer to the truth: the country was founded on religious freedom for Christians, and this has always defined by the extent to which it is extended to other religious groups.

The irony of this remark was not lost on Muslims, amid a ban on travel from countries based precisely on their adherence to Islam. Trump announced he was expanding the ban last Friday to target additional countries, including many that are Muslim majority and African like Nigeria.

Moreover, the ban doesn't stand alone, but rather exists alongside the myriad of policies that have long targeted Muslims in the US. This point in his speech was therefore about reinforcing Christian hegemony, in addition, making the ban appear so inconsequential that it didn’t need to be mentioned. And if he had mentioned it, it would have been through the lens of Muslims as a national security threat.

Either way, in his view, religious freedom need not apply to Muslims.

The operating narrative in the US views immigration in a vacuum. People coming to the US are simply seeking a better life, not fleeing violence in their home countries. The US often plays a significant role in creating and perpetuating such violence, yet immigrants are summarily demonised for entering the very country that caused many to flee in the first place - a fact that Trump conveniently ignores. When immigrants make it into the US, this administration suggests that the vast majority are criminals. According to Trump, “criminal aliens” get off the hook not because of an inadequate justice system, but because sanctuary cities protect them. This fails to address any other explanatory factors, which is unsurprising for a president who has hinged much of his “success” on criminalising immigration and demonising immigrants to appear tough on border control.

This serves a very intentional purpose of comforting white Americans who fear becoming a minority in the US, and whose fears are easily stoked in the language of Islamophobia, racism, xenophobia and anti-blackness.

Like his post 9/11 predecessors, no State of the Union address would be complete without addressing “radical Islamic terrorism”. From there, Trump immediately transitioned into talking about the recent Israel-Palestine deal, largely considered dead on arrival.

As a Muslim Arab American, one thing is clear to me: we must fight to redefine American 'justice', and then work to gain it

One obvious goal was to entrench the idea of Palestinians as terrorists, so that whenever they reject “peace” deals, it can always be attributed to their criminality, rather than the collaboration of two settler-colonial states intent on further disenfranchising Palestinians.

Trump went on to discuss destroying the Islamic State, noting that the “bloodthirsty killer known as al-Baghdadi is dead”. US warfare relies on the narrative of the US as an innocent victim, and in this case, Trump singled out two parents whose daughter was murdered by Baghdadi, to embody this point.

Though the loss of any innocent life is tragic, not all of them count. That’s why Trump’s speech failed to mention the devastation that the US has caused in Iraq and perpetuated in Syria, and the many - mostly Muslim - victims killed as a result.

“As we defend American lives, we are working to end America’s wars in the Middle East,” Trump said. This statement prefaced his commentary on the war in Afghanistan, a country that strictly speaking is not even Middle Eastern. His language implies a defensive US that neither causes nor provokes conflict - an idea that couldn’t be further from the truth.

Trump asserted that “in Afghanistan, the determination and valour of our war fighters has allowed us to make tremendous progress, and peace talks are now underway. I am not looking to kill hundreds of thousands of people in Afghanistan, many of them innocent.”

Coupled with the mention of “manifest destiny”, what Trump was projecting was unhinged and unleashed imperialism to sow fear in Afghanistan, using Afghan lives as pawns in his push to end the US's two-decades-long war in time for his re-election.

One can only imagine the immediate consequences that another country would face by openly contemplating the destruction of American lives in the way that Trump casually does about the lives of non-Americans. But if the "war on terror" has taught us anything, it’s that few people’s lives, save for white Americans, are treated as inherently valuable and worth defending.

Positioning the aggressor as victim

Trump also sought to defend the assassination of Iranian General Qassem Soleimani. According to Trump, Soleimani was the “world’s top terrorist”, responsible for the deaths of many, including Staff Sergeant Christopher Hake, whose family members were in the audience.

In case Soleimani’s assassination didn’t make the US agenda clear, Trump noted: “Our message to the terrorists is clear: you will never escape American justice. If you attack our citizens, you forfeit your life.”

This again positioned the US as the sole victim, a narrative the country has relied on to defend its military adventures and the catastrophic loss of lives caused by US wars. Though this brand of militarism has been defined in terms of “justice”, this misnomer is meant to filter the violence that inevitably follows through language that makes it justifiable, regardless of the context.

Yet, nothing in Trump’s speech projected hegemony as vividly as his support for Iranians protesting their “oppressive rulers”. Pointing to sanctions that have crippled the Iranian economy, he added: “We can help them make a very good … recovery. It can all go very quickly, but perhaps they are too proud or too foolish to ask for that help. We are here. Let’s see which road they choose. It is totally up to them.”

Not only does this express deep paternalism, it offers a helping hand in the form of a threat.

Each year, the State of the Union reminds Americans of what this country prioritises. For those of us on the margins, it’s often directly and symbolically about being the Other, or learning to conform through participating in state violence.

The US has, from its inception, been a violent country. But State of the Union speeches have varied in the extent to which presidents have legitimised that violence, tokenised people of colour and strategically employed narratives.

As a Muslim Arab American, one thing is clear to me after listening to the latest State of the Union: we must fight to redefine American "justice", and then work to gain it. Though this has been - and will continue to be - a difficult feat, our lives literally depend on it.

Maha Hilal
Maha Hilal is the co-director of Justice for Muslims Collective, an organiser with Witness Against Torture, and a council member of the School of the Americas Watch. She holds a PhD from American University in Washington.