The UK's ‘national security’ plan? It's a blueprint for a police state 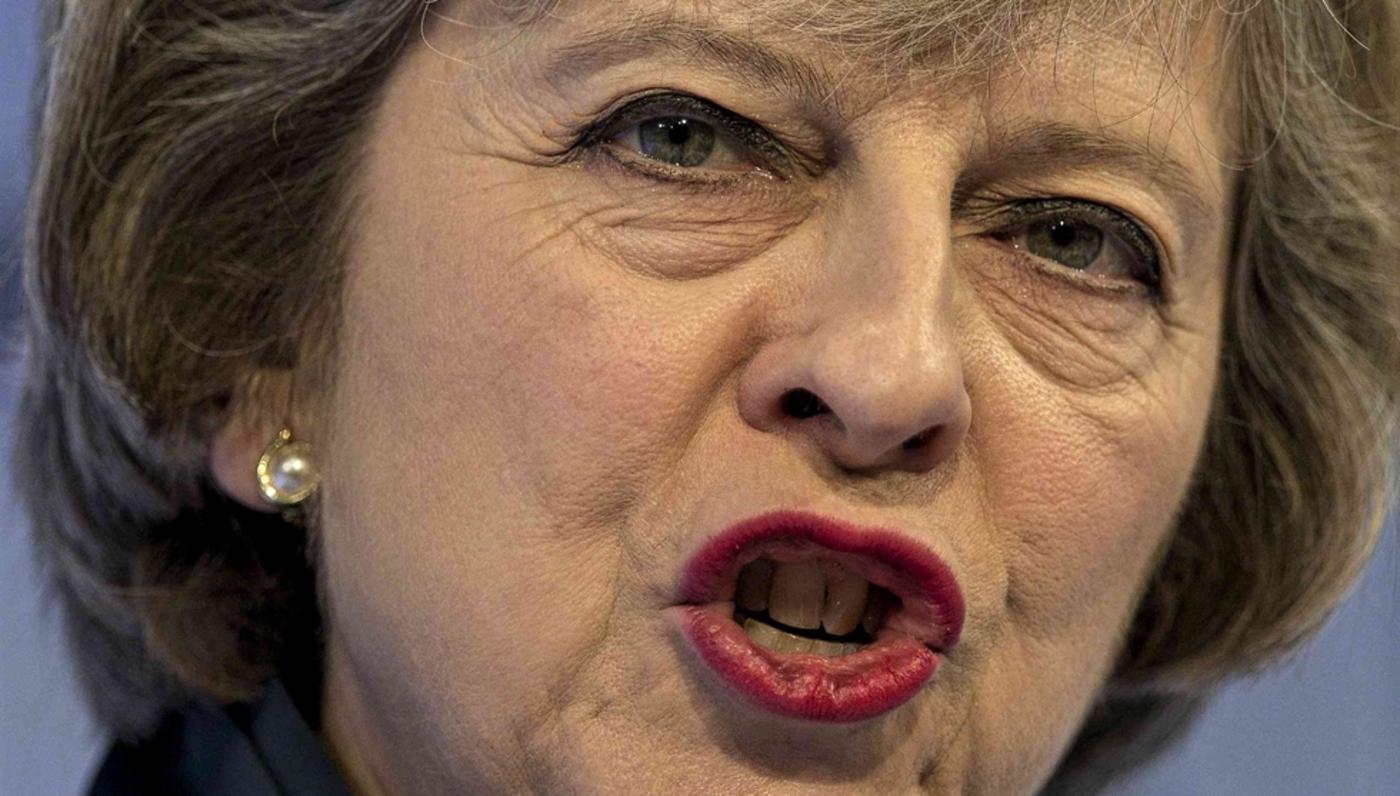 In early December, the British government released its first annual report on the National Security Strategy and Strategic Defence and Security Review.

Despite the total media blackout, the document reveals in stark detail the Conservative government’s plans to expand Britain’s military activities around the world.

In the name of defending "national security", Britain is building a “permanent” military presence in the Gulf to defend Britain’s access to regional energy resources; deploying more troops into Eastern Europe, near Russia’s border; and drumming up support for rampant arms sales to despots in search of better tools to repress their own populations. This is all happening as it promotes economic aid as a mechanism to open up poorer economies to “UK businesses”.

To illustrate the levels of official delusion that saturate the thinking behind this document, it opens with a foreword from Prime Minister Theresa May, which describes “the phenomenon of mass migration” as “one of the global challenges of our times”, having “become more pronounced in the last 12 months”.

This would be fine if it were not for the fact that in the name of "national security", Britain’s complicity in the destruction of Libya has converted that country into a permanently failed state, an Islamic State [IS] safe haven and key driver of mass migration to Europe.

Even the Royal United Services Institute concludes that all Britain’s major military interventions in Afghanistan, Iraq and Libya amount to little more than “strategic failures”.

Yet the new annual report on the UK’s national security strategy offers not a single degree of soul searching about how successive British governments have blown to smithereens the national security of these countries – and thereby its own.

What the report ignores

Among the report’s most egregious proclamations is the confirmation of a renewed military and economic alliance with Gulf regimes.

“We have maintained our strong relations with partners in the Gulf region,” the report declares, noting a “deepening and broadening” of relationships through the first UK-Gulf Cooperation Council (GCC) Summit in December 2016.

There is not an iota of concern about the avalanche of evidence on how Gulf regimes have sponsored Islamist militancy around the world.

One example is the July report from the UK foreign affairs parliamentary committee, which noted alarming evidence of “financial donations” to IS from wealthy donors inside Gulf states, many of whom are either members of, or close to, Gulf royal families.

Or the fact that British Foreign Office officials admit that “some governments in the region may have failed to prevent donations reaching ISIL (IS) from their citizens”.

Or the leaked classified Hillary Clinton email which states that “the governments of Qatar and Saudi Arabia… are providing clandestine financial and logistic support to ISIL [IS] and other radical Sunni groups in the region”.

Never mind. Water under the bridge, tally ho and all that.

The love of oil and money

The national security strategy report goes on instead to celebrate how 1,500 UK military and civilian personnel are active in these terror-sponsoring regimes, protecting “UK citizens and the flows of energy and trade in the region”.

But not only will Britain work with the Gulf regimes to protect flows of oil and money: “We are undertaking detailed planning and preparations for a more permanent and substantial military presence in the Gulf.”

That includes helping to expand military bases in Bahrain, the United Arab Emirates and Oman.

The UK is also expanding militarily into Eastern Europe. British troops have been deployed to Estonia and Poland. RAF aircraft are being stationed in Romania.

And next year, Britain will deploy 3,000 troops to lead NATO’s Very High Readiness Joint Task Force, which was set up to address threats posed by Russia and risks from the Middle East and North Africa. This is part of a growing military build-up on Russia’s borders – the biggest build-up against Russia since the Cold War.

One of the many perks for the Gulf regimes partnering with the UK will be their access to British-made products to help them bomb, kill, spy on and torture their opponents.

“We are enhancing our support to the defence and security export sector,” says the report, noting that “exporting is key to sustaining the UK’s industrial base in the long term”.

The report explains that the Ministry of Defence and British Army play a key role in promoting “defence equipment and services from UK-based suppliers to overseas partners and allies”. In fact, promoting arms sales between private industry and tyrannical regimes and warring states everywhere “is now a core task for the MoD".

The policy is strangely at odds with the strategy’s commitment to “cutting off the supply and availability of firearms to criminals and terrorists”.

British arms sales in 2015 topped £3bn, and they went to 21 out of the Foreign Office’s list of the top 30 human rights violators, including Gulf regimes such as Saudi Arabia and Bahrain. The latter have, of course, spearheaded all sorts of horrendous crimes and state terror, particularly Saudi Arabia in Yemen.

But there are “hundreds of millions of pounds in revenue for the UK” (read "UK private defence conglomerates" instead of "UK"), the report says. Indeed.

A world safe for corporations

More broadly, the document flags up the goal of “economic security and opportunity”.

The government has set up a new £1.3bn Prosperity Fund to enable the UK “to deepen relationships with countries across the globe”.

In other words, what the UK wants to make the world is safe for corporations

The fund will use Official Development Assistance resources to promote “reforms” in support of “economic growth in development countries”. By “reforms”, of course, is meant bankrupt neoliberal structural adjustments such as privatisation, deregulation and liberalisation.

Supposedly, this will reduce poverty by creating “opportunities for international business, including UK companies".

In other words, what the UK wants to make the world is safe for corporations. As British historian and development expert Mark Curtis has shown, thanks to such "aid" policies, 101 mostly British companies now control over $1tn worth of Africa’s oil, gold, diamond, coal and platinum.

The 'most extreme surveillance law'

Defending "national security" also means making sure the British public don’t get too uppity about all this. That means keeping an eye on what they're saying, emailing, posting on social media and talking about in schools and universities.

The justification, of course, is preventing and countering the extremism that leads to terrorism. But the word "extremism" is so ill-defined it has already been deployed to great effect under the government’s Preventing Violent Extremism (Prevent) programme. The new national security strategy report celebrates the massive expansion of Prevent, as well as the passing of the Investigatory Powers Act 2016.

READ: Why Theresa May is dull - but dangerous

Police forces, local councils and schools have been caught identifying anti-fracking and environmental protesters as posing “key risks” under Prevent. After a public outcry when the practice appeared to receive support from the UK information commissioner, the Home Office was forced to clarify that anti-fracking protesters were not considered a risk.

Of course, the Metropolitan Police still maintains a nice database of what it calls "domestic extremists", which happens to have targeted perfectly peaceful environmental campaigners like Baroness Jenny Jones of the Green Party.

The Investigatory Powers Act will enhance police powers to a vast extent: as the report says, it “brings together the powers available to law enforcement and the security and intelligence agencies to acquire communications and communications data”.

Britain is now not only a fully fledged police state, it is an unashamed empire of predatory neoliberal capitalism, which has no qualms about abusing its military power to expand its reach

No wonder it has been described as the “most extreme surveillance law ever passed in a democracy”, according to the Open Rights Group.

The new annual report makes one thing very clear. Britain is now not only a fully-fledged police state, it is also an unashamed empire of predatory neo-liberal capitalism, which has no qualms about abusing its military power to expand its reach.

- Nafeez Ahmed PhD is an investigative journalist, international security scholar and bestselling author who tracks what he calls the 'crisis of civilisation.' He is a winner of the Project Censored Award for Outstanding Investigative Journalism for his Guardian reporting on the intersection of global ecological, energy and economic crises with regional geopolitics and conflicts. He has also written for The Independent, The Sydney Morning Herald, The Age, The Scotsman, Foreign Policy, The Atlantic, Quartz, Prospect, New Statesman, Le Monde diplomatique and New Internationalist. His work on the root causes and covert operations linked to international terrorism officially contributed to the 9/11 Commission and the 7/7 Coroner’s Inquest.

Photo: Theresa May has made 'national security' one of her key priorities as UK Prime Minister (AFP)