US aid cuts to Egypt: A wink to the region's dictators

Rania al-Malky
The US aid cuts announced last week are a step in the right direction to curb Egypt's autocratic regime. But if recent history is any guide, this is nothing more than optics 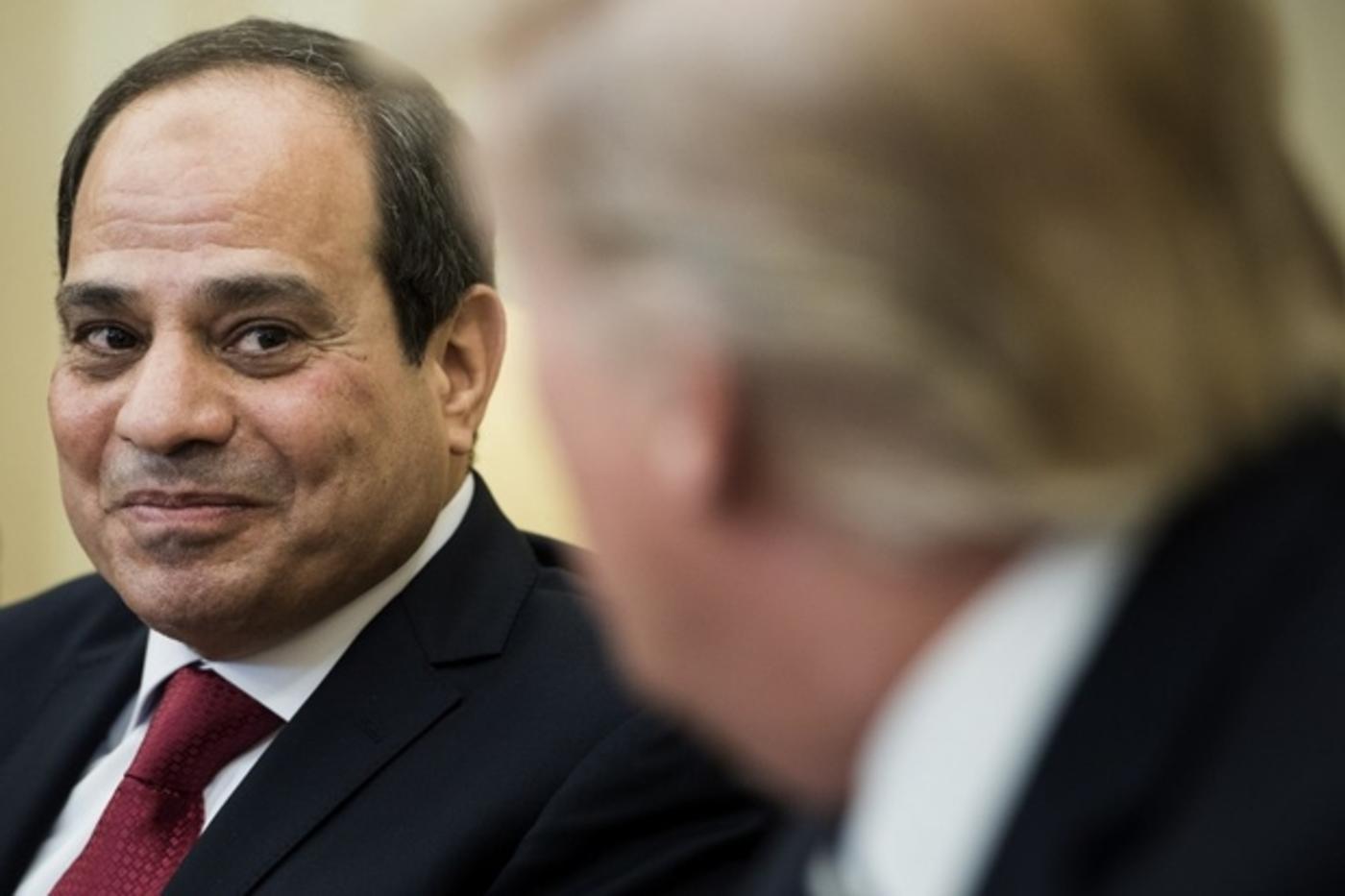 Three pieces of news dominated Cairo almost simultaneously last week: the US administration announced its decision to cut and delay almost $300m in military and economic aid to Egypt; Jared Kushner, president Trump’s son-in-law and Middle East envoy arrived in Cairo to bolster regional peace talks; and Trump called Egypt’s President Sisi to reassure him that he is keen to “overcome obstacles” in the way of cooperation between their two countries.

Who knows? It might just work. Dangling carrots do have a certain allure to certain four-legged creatures

The about-face may have raised a few eyebrows, but it seemed to be in keeping with the erratic nature of the Trump administration in general. And Egypt’s reaction fits neatly with that administration’s characteristic illusions of grandeur. Egypt’s foreign minister, Sameh Shoukry, lashed out against the US’s “poor judgment” and the “negative implications” such a decision would have on achieving the two countries’ common goals and interests.

Last Tuesday, the US denied Egypt $96m in aid and delayed $195m in military funding. According to the New York Times, the move was motivated by concerns over Egypt’s human rights record and its continued relationship with North Korea.

But the actions, as the Times revealed, were not as tough as they might have been. By pausing the provision of the military funding, the Trump administration saved the money from expiring entirely on 30 September and, in this way, Egypt could “eventually get the money if its record on human rights improves".

But how exactly do you do that in light of a situation that is deteriorating by the minute?

While cutting $96m in aid entirely was an unprecedented move, the carrot-and-stick tactic to temporarily withhold military aid is nothing new.

In August 2013, the Obama administration put a hold on the supply of military equipment to Egypt for nearly two years in the aftermath of the violent crackdown on protesters against the military coup that removed Egypt’s first democratically elected president Mohamed Morsi. Over a thousand people were killed by army-backed police in what came to be known as the Rabaa Massacre.

The decision heralded a long period of diplomatic tension between the countries and sparked an avalanche of xenophobic anti-US media campaigns peppered with absurd conspiracy theories. But in March 2015, Obama directed the release to Egypt of 12 Lockheed Martin F-16 aircraft, 20 Boeing Harpoon missiles, and up to 125 M1A1 Abrams tank kits.

At the time, the White House said that it was in the interests of US national security and that future aid would focus on counter terrorism, border security, maritime security and Sinai security, where Islamic State militants were active.

Two years on, the situation has reached catastrophic proportions. Tens of thousands of political prisoners languish in jail without due process, over 900 have reportedly been subjected to enforced disappearance and as many as 7,400 military trials of civilians have taken place since Sisi issued a decree widening the scope of military jurisdiction in 2014, according to Human Rights Watch.

Meanwhile, the proverbial “war on terror” in Sinai has statistically proven entirely counterproductive, as Islamic State-linked militants continue to carry out highly organised, large-scale attacks on police and army check points, successfully carry out political assassinations and target civilians such as the 224 killed in the Saint Petersburg-bound MetroJet flight in 2015.

The media has also been stifled more thoroughly than at any other time in Egypt’s modern history, with the government openly admitting blocking over 133 independent news websites for “subversive” content that threatens “national security”.

And, setting a precedent, state-owned media institution Akhbar El-Youm took over the financial and administrative affairs of Daily News Egypt, whose owner Mostafa Sakr had been stripped of his assets in December 2016 on the pretext of an unproven affiliation with the Muslim Brotherhood.

Egypt ranked 161 out of 180 countries in the 2017 Reports Without Borders press freedom index, surpassed by the vast majority of African countries. In late 2016, the Committee to Protect Journalists reported that Egypt ranked third in the number of journalists behind bars after China and Turkey, with 25 currently imprisoned.

While in the past it was possible for civil society organisations to be at the helm of efforts to expose such blatant human rights infringements, an 87-article bill ratified by Sisi last May effectively stunted the ability of non-governmental organisations to function, let alone exist.

According to news reports, the law restricts NGOs, including those dedicated to vital social and development work, and makes it difficult for charities to deliver services. It also bans domestic and foreign groups from engaging in the area of human rights or work that can harm the loosely defined concepts of “national security, public order, public morals or public health”. Failure to comply can result in $55,000 in fines and up to five-year prison terms.

And in the rare cases where they can operate, NGOs are subjected to the capricious control of security agencies, which require permission to conduct fieldwork and must align their mandates with the state’s development needs.

In testimony given last April to the US Senate Appropriations Subcommittee on State, Foreign Operations, and Related Programs, the Carnegie Endowment’s senior fellow Michele Dunne hit the nail on the head. She questioned how the US can continue to support “an important country and longtime regional ally when its government adopts policies that promise chronic instability?”

Her warning came two weeks after Trump lauded Sisi’s policies, buffing him up on the world stage as a “fantastic guy” during his Washington visit.

But while it seems that the recent aid cuts and delays are - surprisingly - a step in the right direction in deterring Egypt’s autocratic regime, the reality on the ground, based on a consistent historical pattern, is that such tactics never have and never will have any significant impact on Egypt’s abysmal human rights record, especially in light of the endless flow of Gulf dollars into Cairo’s coffers.

Trump’s hasty call to reassure his biggest client in the area – much like his neurotic tweets – are a wink to the region’s dictators which the whole world can see, abruptly lifting the veil on the US’s real priorities in the Middle East.

The US, aware of what little control it has over its unruly ally’s domestic affairs, is hoping to put its tax dollars to better use by twisting Cairo’s arm about its Pyongyang ties. Egypt’s dealings with North Korea are no longer a skeleton in the closet, with UN investigators pointing to evidence of North Korean trade in weapons systems in the Middle East and Africa using front companies based in Port Said, according to the Times. The US seems to be telling Sisi: you can’t have your cake and eat it.

Who knows, it might just work. Dangling carrots do have a certain allure to certain four-legged creatures.

Photo: US President Donald Trump listens while Egypt's President Abdel Fattah al-Sisi makes a statement to the press in the Oval Office before a meeting at the White House on 3 April 2017 in Washington, DC (AFP) 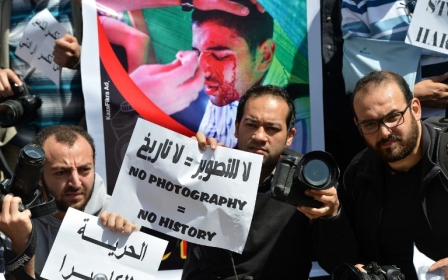