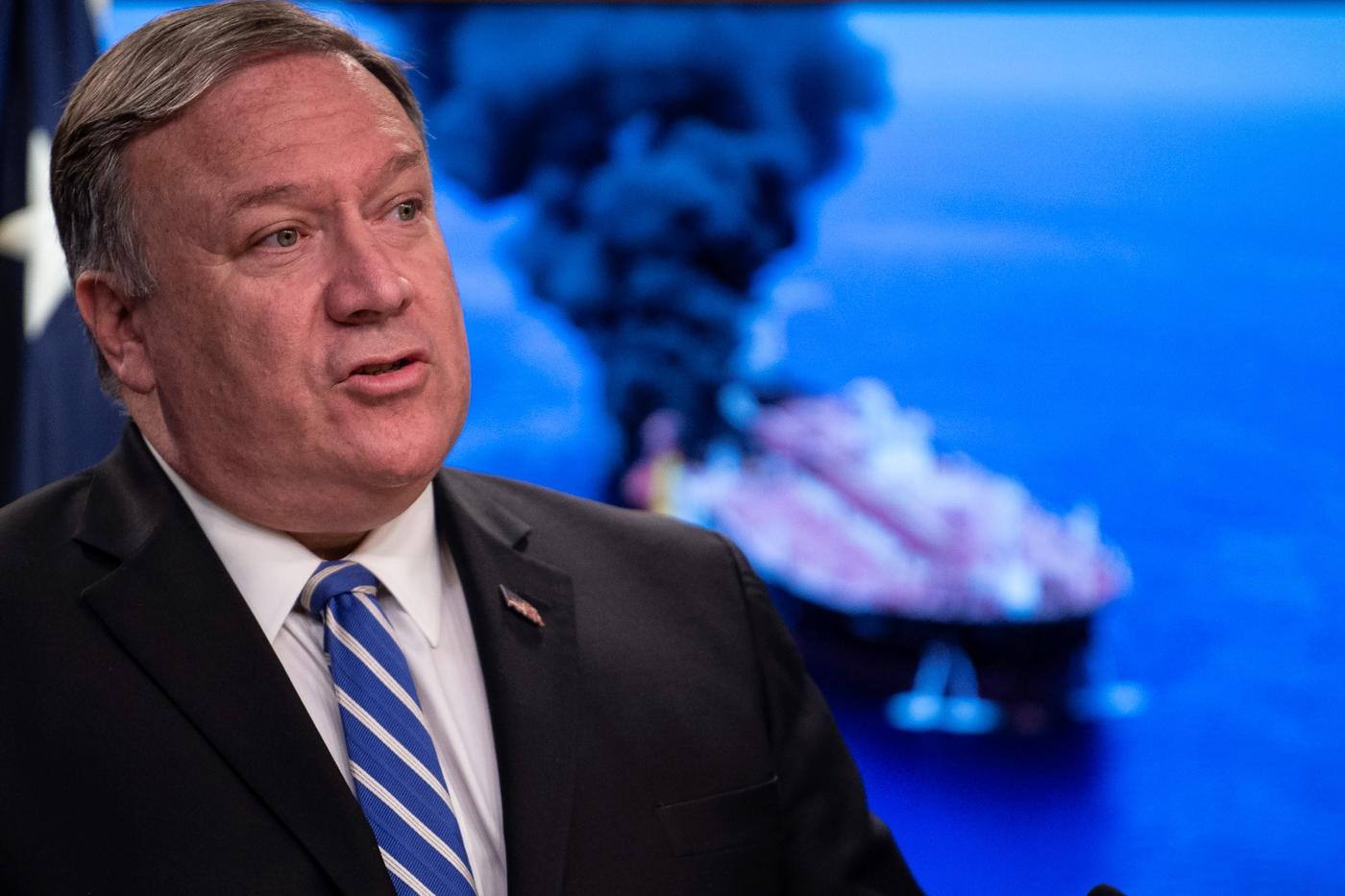 US Secretary of State Mike Pompeo delivers remarks to the media at the State Department in Washington, DC on 13 June (AFP)

Iran's downing of a US drone over the Strait of Hormuz on Thursday and the apparent calling off at the last minute of a retaliatory American strike on the same day has dramatically raised the threat of confrontation in an already tense Gulf region.

In fact, the history of Iran-US relations during the past four decades has been informed by a series of unprovoked aggressions.

US Secretary of State Mike Pompeo's recent statement blaming Iran for the attacks on oil tankers in the Gulf of Oman has curiously embraced this long historical record, through a simplistic and biased version of events.

Pompeo said: "This is only the latest in a series of attacks instigated by the Islamic Republic of Iran and its surrogates against American and allied interests, and they should be understood in the context of 40 years of unprovoked aggression against freedom-loving nations."

The mother of all provocations

Pompeo has ignored the mother of all provocations: the US withdrawal from the JCPOA nuclear deal in May 2018, followed by the tightening of sanctions against Iran and the strong pressures on allies and third countries to align to this policy.

The net result, so far, is a full-blown, unprovoked economic war against Iran. Just for the record, the International Atomic Energy Agency has not denounced any violation by Tehran of the 2015 nuclear agreement.

Pompeo has ignored the mother of all provocations: the American withdrawal from the nuclear deal

Regardless of the still uncertain responsibility for the recent tanker attacks in the area (no independent conclusions have been presented so far), there are four aspects of the US secretary of state's statement that appear puzzling.

The first one is his choice of a historical period of four decades; the other two allude to the interests of the United States and its allies and their alleged love of freedom; and, finally, a key word: "unprovoked".

Why did Pompeo only dwell on the last 40 years and not go a little further back? If he did so he would have been compelled to mention that Iran, on 30 November 1971, invaded three small islands (Abu Musa, Greater and Lesser Tumb) strategically positioned at the mouth of the Strait of Hormuz that were, until then, destined to fall under the sovereignty of the newborn United Arab Emirates.

The problem is that this attack – undoubtedly unprovoked – was ordered by Washington's main ally in the region, Iranian despot Shah Reza Pahlavi.

The list of the interests of the US and its allies in the region is quite long: the unshakeable support to Israel, the fight against terrorism, the peace and stability of the region, the freedom of navigation, the protection of energy supplies from the Persian Gulf, and support for the so-called moderate Arab countries.

Quite surprisingly, Iran shares some of these interests. It supports freedom of navigation as well as the free export of energy resources from the Persian Gulf - of course, on the condition that such export freedom applies to all.

Iran also claims to be engaged in fighting terrorism, as its recent military commitment against the Islamic State group (IS) in Iraq, and to some extent in Syria, may affirm.

Unfortunately, Iran also poses a threat to some other interests of the US and its allies because of its revolutionary ideology, which commits the country to support oppressed people and to struggle against perceived injustices.

The Palestinians under Israeli occupation in the West Bank and under siege in Gaza, the Shia minorities in some Gulf monarchies and Yemen are, according to this ideology, victims of oppression and injustice and deserve to be supported.

In the perception of the United States and its allies, this "support" is seen as regional meddling, interference, attempts to dominate the region and support of terrorism.

In an inverse perception, Iran has always considered the war with Iraq in 1980, and the extended sanctions to which it has always been subject, as unprovoked Western and Arab attempts to crush its legitimate revolution and to change its regime.

In the perception of the US and its allies, Iran's 'support' is seen as regional meddling, interference, and an attempt to dominate the region

In his statement, Pompeo did not specify the freedom-loving nations he referred to. However, they are easily imaginable. The first is undoubtedly the United States itself, followed by Israel (the only democracy of the Middle East, according to Tel Aviv's proud rhetoric).

It is not yet clear whether the strong and undoubted love for freedom that characterises the US and Israeli nations is extended to the Palestinian citizens under occupation. Apparently not, according to everything we know about the forthcoming "deal of the century".

It would also be difficult to include among the freedom-loving nations the numerous other US allies in the region, unless the meaning of the word freedom is restricted to some ruling dynasties' and political leadership's exclusive power to decide the destiny of their respective subjects and citizen regardless of their will.

Last but not least, the correct circumstance for using the term "unprovoked" is problematic. In the US perspective, the first Iranian unprovoked aggression was the seizure of the personnel of the US Embassy in Tehran in 1979.

From an international law viewpoint, it was undoubtedly an illegal act, but was it unprovoked? In fact, from the usually longer and enlarged Iranian perspective, the 1953 US-orchestrated coup against prime minister Mossadegh was also illegal and against international law, considering that it also ushered in the 25-year-long long brutal dictatorship of Reza Pahlavi. 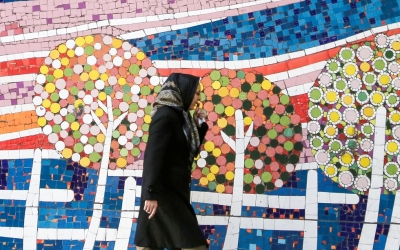 Trump and Tehran: This is not 2003 and Iran is not Iraq
Read More »

Another unprovoked aggression was the late Iraqi president Saddam Hussein's attack on Iran in 1980, and the long and bloody conflict that followed, during which Iraq, hardly qualifying as a freedom-loving nation, was supported by the United States and the Arab countries with the singular exception of Syria.

Also, the August 1988 downing of an Iranian civilian jet by the US Navy could have been labelled by Iran as an unprovoked American aggression. If it was, as Washington claimed, a tragic accident, compensation should have been paid, as usually occurs in such cases when freedom-loving, democratic and civilised nations, like the United States, are involved.

On the other side, the following year's bloody Iranian fatwa against writer Salman Rushdie for the publication of his Satanic Verses could be considered as an attack on freedom of expression, one of the pillars of Western values.

Regrettably, in the last four decades this vicious circle of unprovoked acts has not ceased.

A more reflective and shared historical narrative of the region, the humble recognition that mistakes were made by both sides, and less hubris, are three essential prerequisites to any attempt at improved mutual understanding.

This is the only way forward if both sides genuinely wish to spare the region from the abyss of a renewed, catastrophic, conflict.

Iran nuclear
Why a US-Iran clash was inevitable
Mustafa Salama 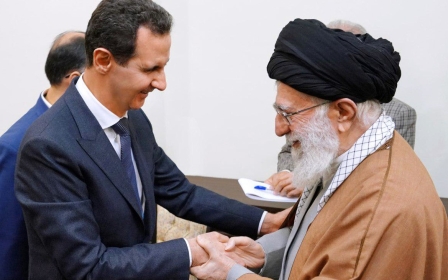