Tazeen M. Ali
As Muslims process restrictions on safe abortion access, they must also cope with the frustration of being the go-to spectre of American politics 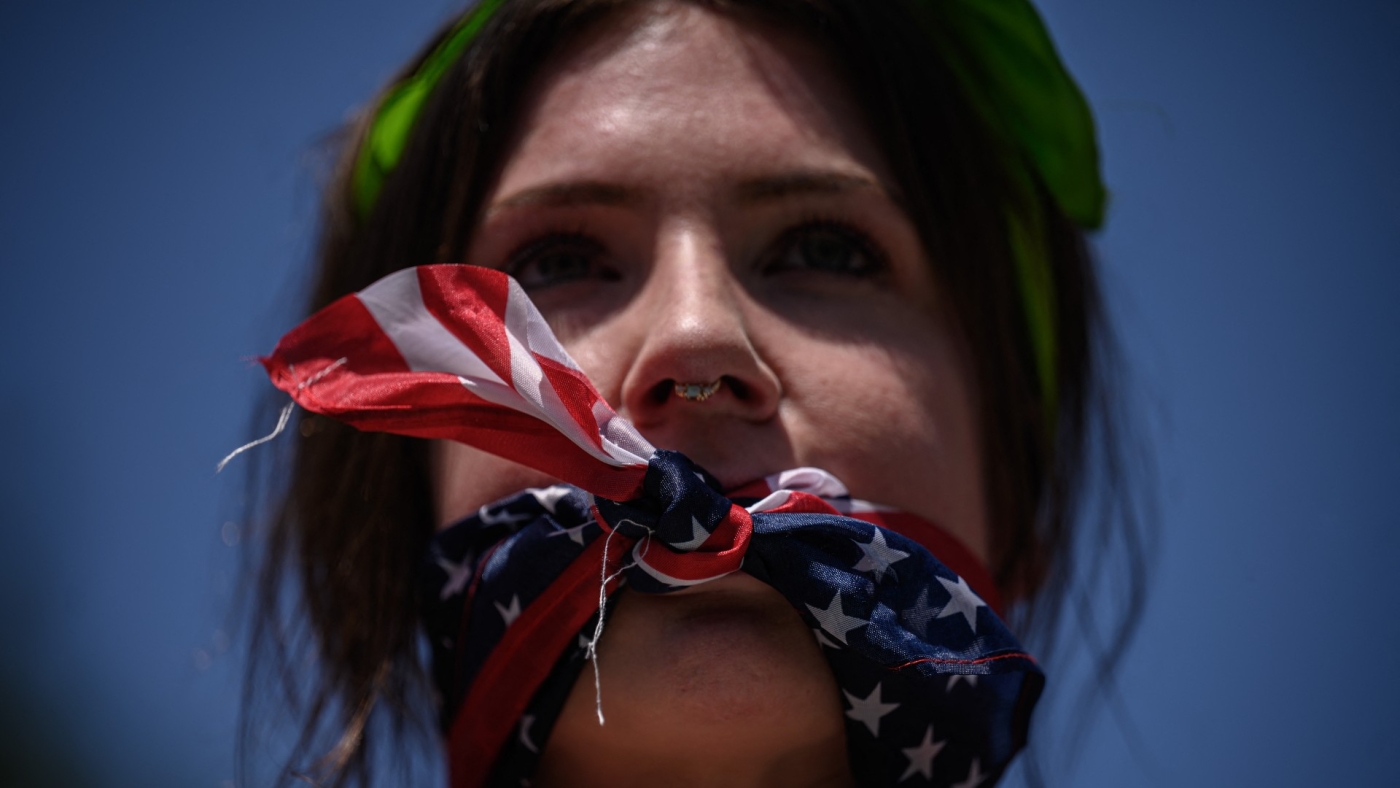 A reproductive rights activist, gagged by a scarf in the colours of the US flag, marches during a protest against a recent Supreme Court ruling on abortion rights, in New York on 4 July 2022 (AFP)

In the wake of the Supreme Court ruling overturning Roe v Wade, which endangers the lives of women all over the country especially those in low-income communities of colour, nationwide protests have continued for weeks.

Many faith leaders, including from a variety of non-Evangelical Protestant, Catholic, Jewish, and Muslim backgrounds, have lamented how this landmark decision not only renders healthcare inaccessible but also violates the principles of religious freedom.

Overturning Roe v Wade privileges a particular brand of politically conservative Christianity at the expense of other religious interpretations of reproductive rights, even though abortion debates are often culturally framed through a false binary of secular supporters and religious opponents.

Within this binary, Islam in particular has been caricatured as epitomising extremism, especially with respect to restrictions on women and sexual minorities. We have witnessed the re-emergence of this trend in recent weeks with invocations of “sharia law” and the “American Taliban” in criticisms of the court’s decision.

Treating Islamic references as synonymous with extreme human rights violations detracts from a deeper reckoning with America’s deeply rooted white Christian nationalism that underpins the dissolution of the protections under Roe v Wade.

It also demonstrates how the spectre of Islam continues to haunt public discourse in the United States.

The spectre of Islam

Invoking the spectre of Islam in US public discourse to signify something that is un-American, extremist, and illiberal is not limited to any one segment of the population.

Celebrities, news pundits, and politicians alike have deployed Islamic references to lament Christian extremism. Actor Mark Ruffalo, who has condemned Islamophobia in the past, warned on Twitter, “Time to fight like hell in any way you know how. The American Taliban has taken over the Supreme Court.”

In May 2022 after a draft ruling from the court was leaked, comedian Trevor Noah joked, “Isn’t it amazing after all these years of the right screaming about the threat of sharia law, it turns out they were just jealous?” His comments were met with laughter from the audience.

More recently, Republican Congressman Adam Kinzinger characterised his colleague Lauren Boebert as representing the “Christian Taliban” after she commented that there should be no separation between church and state.

To be sure, the Taliban do not represent American Muslims, nor do they have widespread support among Muslims worldwide. Likewise, some interpretations of the Sharia in Muslim-majority countries are indeed restrictive of women’s rights.

Therefore, one could conceivably argue that such references do not constitute anti-Muslim rhetoric but rather, only anti-extremist rhetoric. And yet, invoking a Muslim militant group that is active in Afghanistan and parts of Pakistan, or an Islamic legal framework, to describe a US problem does indeed implicate American Muslims and racialises them as other.

Those who engage in such comparisons rest on the assumption that these extreme oppressive measures of misogyny are typical characteristics of non-white groups and societies who share some part of American Muslims’ religious and ethnic backgrounds.

The flip side of this assumption is that the type of religious extremism that led to overturning Roe v Wade is presented as so anomalous in the white American context that it warrants a foreign reference to help fellow Americans understand the gravity of the stakes. 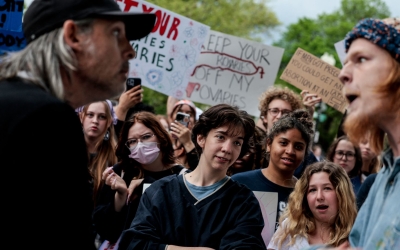 This again diminishes the force of white Christian nationalism and how it threatens democratic institutions of all kinds.

While some of the folks who invoke the Taliban or Sharia in their critiques of abortion restrictions are probably not intending to participate in anti-Muslim racism, it is worth reflecting on the implications of their language.

To be clear, these figures choose to reference a foreign entity and/or minority religious legal thought before, or instead of, acknowledging the deeply American nature of such draconian legal measures that would strip women of bodily autonomy.

In other words, they favour foreign Islamic references at the expense of domestic Christian ones to frame judicially sanctioned American misogyny. Ultimately, it is not difficult to guess why such invocations are highly effective in expressing outrage and despair over the current state of US politics.

'Muslim' as a racial epithet

The fact is that Islam has long stood in for a set of values that are antithetical to liberal democracy and women’s rights in the US context.

Indeed, the term “Muslim” was appropriated as a racial epithet against both Thomas Jefferson and Barack Obama by their political opponents to signify unsuitability for public office and un-Americanness, more broadly.

Additionally, during the 2008 presidential election, Republican candidate John McCain was praised for his “bipartisan” handling of a racist supporter who accused Obama of being an untrustworthy "Arab" - an ethnic identity that is often conflated with the category Muslim in the popular US imagination - when he responded that his political opponent was a decent family man and not an Arab.

Several liberal outlets lauded this interaction with no interrogation of how Arab was deployed as antithetical to being trustworthy, or a family man.

Likewise Obama and his defenders, with few exceptions, insisted on his Christian identity to rebut accusations of being Muslim rather than recognise the negative connotations of the allegations themselves.

Many American Muslims have been outraged by the court’s decision to overturn Roe.

Some have highlighted that this is yet another channel through which to increase state surveillance through technology like menstrual period tracking apps, which can share sensitive data about women’s reproductive cycles with government agencies.

Moreover, American Muslim scholars of Islam have attested to the fluidity of the Islamic legal tradition, weighing in on how abortion is permissible under many interpretations of sharia, debunking the sensationalist headlines implying otherwise. Muslim advocacy groups have been organising and raising money in support of access to abortion.

In short, US Muslims are among the majority of American citizens for whom the Supreme Court ruling on Roe v Wade violates their interests. And yet, the frequent appropriation of Islamic language in critiques of the decision demonstrate that American Muslims continue to exist outside the scope of national belonging.

Even as Muslims mourn and process the violence of nationwide restrictions on safe abortion access, they must also cope with the frustration and trauma of being the go-to spectre of American politics.

Tazeen M. Ali is a scholar of Islam and gender in the United States and assistant professor of religion and politics at the John C. Danforth Center at Washington University in St. Louis. 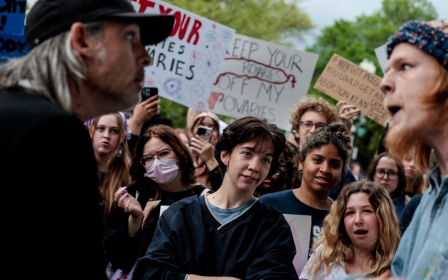 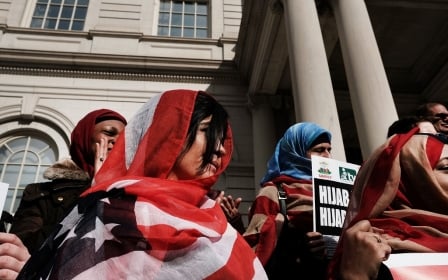