Toby Matthiesen
Instead of spending money on elections that ring hollow, Bahrain would be better served if it managed to renegotiate a durable social contract and a political system based on inclusion 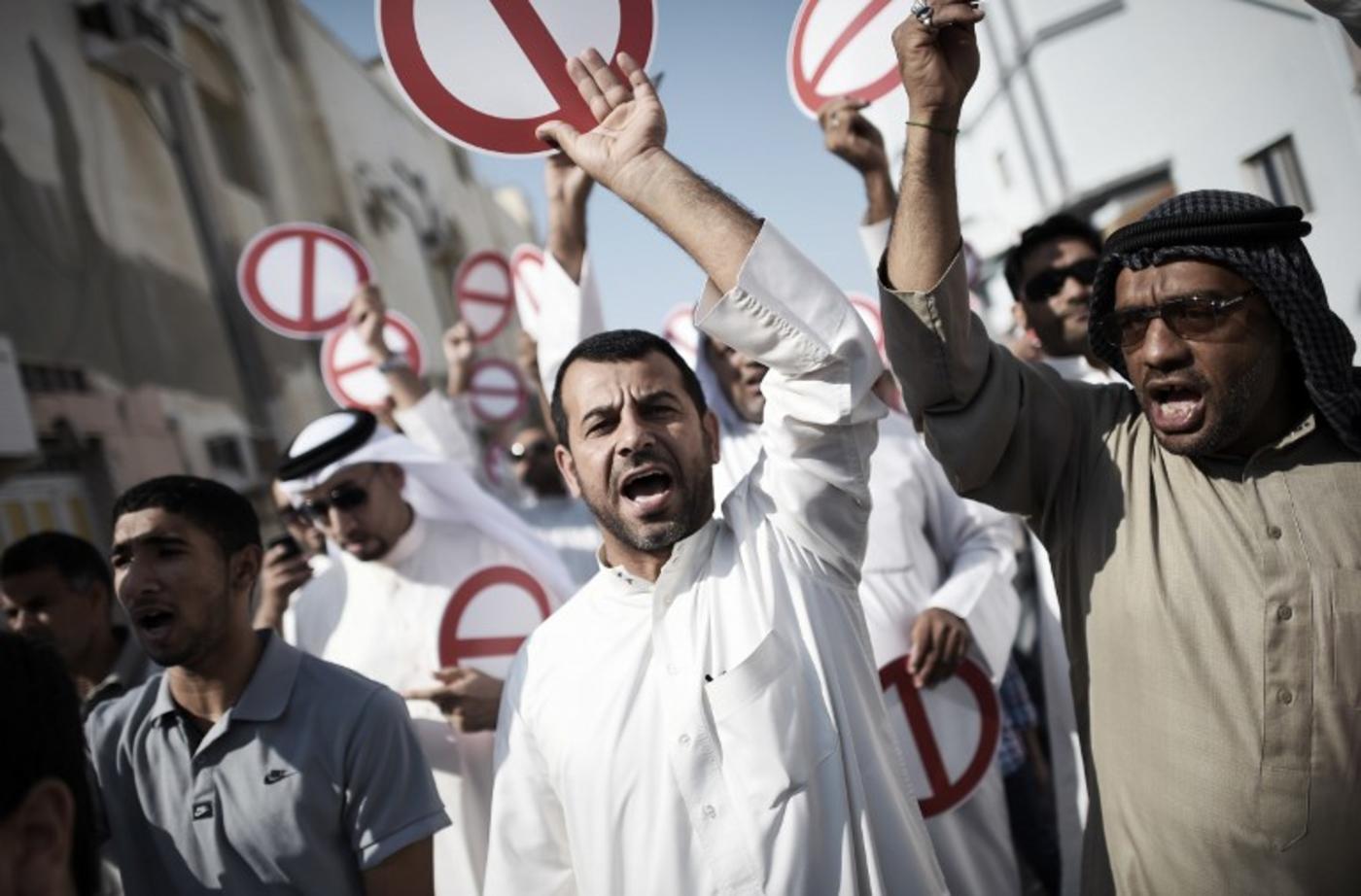 On Saturday, Bahrainis will go to the polls to elect municipal councils, as well as the lower house of a bicameral parliament, the upper house of which is appointed by the king.

Elections for the lower house have been held in Bahrain since 2002, and the elected councils have more powers than similar bodies in many other Middle Eastern states.

If one tunes into Bahrain's state-run TV station, interviews with happy citizens hailing this as a milestone in the political process towards an economically prosperous and stable future for Bahrain are played in a loop. So why would a coalition of opposition forces that includes Shiite Islamists and remnants of Arab nationalist and leftist political movements decide to boycott these elections?

There is, first of all, the issue of how much power the elected lower house actually has. Given that most people appointed to the upper house are loyalists - conservative on political issues but “liberal” on social issues - they will often disagree with the elected candidates.

So even if the opposition did get a majority in the lower house, it could be overruled by the upper house together with the elected loyalist candidates.

The government argues that it gave the elected candidates new powers in 2012, but this fundamental flaw at the core of the representative institutions remains. In addition, the government in late September 2014 changed the boundaries of the electoral constituencies.

While addressing the imbalances between the districts has long been a demand of the opposition (in some constituencies representatives were previously elected with only a few hundred votes, while in others with more than 10,000), the present changes were not made without political considerations in mind.

These changes seem to leave the prospects of the Shiite Islamist opposition more or less intact. But they disfavour leftist and liberal Sunni candidates associated with the opposition, as well as right-wing Sunni groups. The latter have supported the ruling family in its crackdown on the Shiite-led uprising since 2011, but the boundary changes have been designed to weaken the Bahraini Muslim Brotherhood, which has consistently had several representatives in the lower house and maintained close relations with members of the ruling family.

The main reason for the opposition boycott, and for the political stalemate in the country then, is that the ruling family has not instituted any meaningful political reforms that would fundamentally alter the balance of power in the country.

After a mass uprising in February and March 2011 for more democratic rights, a harsh security crackdown has destroyed the livelihoods of thousands of Bahrainis who have been dismissed from their jobs or have been driven into exile.

The crackdown has also cost the lives of over a hundred Bahrainis, as well as several Bahraini and foreign security officers, and has landed thousands in jail for political reasons. A national dialogue that was intended to bring the country together and to get the opposition to participate in the elections, failed to achieve these goals.

In essence, the government was telling the opposition that it would only talk to them about reforms if they returned to the political fold. This would force the opposition to go back to square one and return to the time before the uprising, to 2010, when al-Wefaq, the largest Shiite Islamist bloc, won 18 out of 40 seats up for grabs in the lower house elections.

However, the uprising itself was an expression of wide-spread dissatisfaction towards politics on the island and the limited powers given to elected members of the lower house.

The constituencies that the opposition represents have not forgotten what has happened in the last four years, and have suffered heavily from repression and stigmatisation.

Yet, for all the negativity surrounding the vote, the decision to boycott was not an easy one. Some people in al-Wefaq thought that the group should take part. They feared the alternative, which would leave them outside the political process and which, in the wake of failed dialogue, could effectively cut them out of the decision-making process - something which would be very costly for both the party and its supporters.

To some extent, this has already come to pass. The Bahraini Judiciary has threatened al-Wefaq and Waad, the cross-sectarian leftist party, with which it jointly issued the boycott call in October, with the withdrawal of its licenses, which would effectively drive them into illegality.

The costs of this could be huge, and could see more leaders share the fate of Waad's secretary-general, Ibrahim Sharif, a Sunni, who is serving a prison sentence for participation in the uprising.

The hardliners in Bahrain with close links to the monarchy, as well as their supporters, can live very well with a boycott and this shift, which means there are now more seats to be filled and more tenders to be awarded, with the benefits staying within the core of the regime and its loyalist supporter base.

At the same time, the hardliners on the opposition side (the Coalition for a Republic that includes the Coalition of Youth of the 14 February Revolution) have long pushed for a boycott and are effectively committed to overthrowing the regime by any means necessary. By not giving any concessions to the pro-dialogue opposition, the government has pushed them to boycott the elections.

True, several independent Shiites are standing in the elections, many of whom stem from the old notable families that staffed the Shiite judiciary and have co-operated in business dealings with the al-Khalifas for generations. It is a sign of state weakness, however, that particularly in Shiite areas these Shiite candidates have become the targets of an intimidation campaign, led by the revolutionary youth that have firebombed their cars and campaign tents.

Indeed, in the villages and pro-opposition neighbourhoods, a largely self-governed revolutionary atmosphere has taken root, where the legitimacy of the state is no longer questioned, but simply denied. Bahraini security forces can keep these areas on lockdown through checkpoints and roadblocks, but within these areas the attitudes towards the state and anyone who cooperates with it have hardened.

In the past year or so, activists have started to deliberately target the economic infrastructure of the state and of pro-regime businesses, burning down banks and shops, and attacking government institutions. The shiny ads of a Bahrain that wants to be Dubai do not reflect this reality, with the country at risk of resembling other failed states that have been ravaged by sectarian conflicts.

The ruling elite is desperate to gloss over this disparity and portray Bahrain as a Western ally that is on a path towards democracy. The elections are a cornerstone of that image which is well encapsulated by the "business friendly" Bahrain slogans that were prominent in pre-uprising days.

However, staying on the business-as-usual road, and using the elections to broadcast a commitment to change, rings hollow when many think that the monarchy remains committed to promoting a system based on electoral engineering, identity politics and cronyism.

Instead of spending money on improving its image abroad, Bahrain would be better served if it managed to renegotiate a durable social contract and a political system based on inclusion, not on exclusion and securitisation. Unfortunately, these elections are intended to do the former and not the latter.

-Toby Matthiesen is a research fellow in Islamic and Middle Eastern Studies at Pembroke College, University of Cambridge. His first book “Sectarian Gulf: Bahrain, Saudi Arabia, and the Arab Spring That Wasn’t” was published by Stanford University Press in 2013 and includes a detailed account of the Bahrain uprising. His new book “The Other Saudis: Shiism, Dissent and Sectarianism,” which outlines the history of political movements among the Shia of Saudi Arabia and their relationship with the Saudi state, will be published by Cambridge University Press in January 2015.

Photo credit: Bahraini protestors hold signs calling for the boycott of the upcoming parliamentary elections during a rally in the Shiite village of Diraz, west of Manama on Friday (AFP) Bahrain opposition activists set up alternative vote ahead of elections