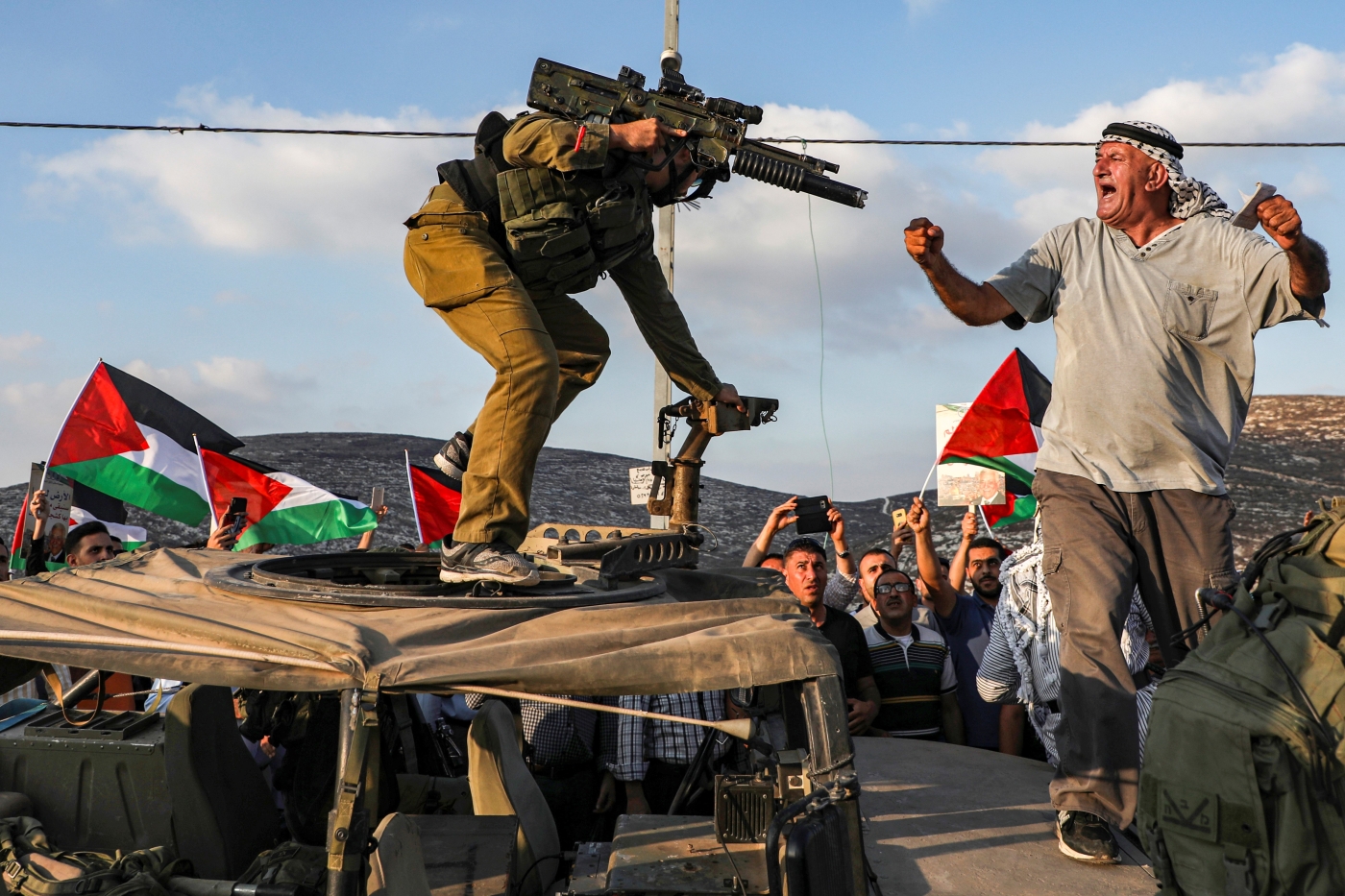 A Palestinian protester yells at an Israeli soldier as he confronts him near the Palestinian village of Naqura, northwest of Nablus in the occupied West Bank, on 4 September (AFP)

The law’s dangerous consequences for Palestinian citizens of Israel included constitutionally enshrining Judaisation policies on resource distribution, land planning, housing and language, as well as consolidating the ethnic hierarchy and restricting juridical independence, with no regard to the values of equality or human rights.

Yet, this debate is seen as an “internal matter”, despite statements, appeals and condemnations warning against the impact of this colonial law and its denial of Palestinians’ right to self-determination in their homeland.

It is important to read this law against the backdrop of Israeli government plans to annex Area C of the West Bank and impose a solution that may involve a confederation with Jordan. The nation-state law, driven by settler leaders from right-wing parties, allows the government to take rapid steps in this direction.

Some have wondered why Israel needed to pass this law, as it already applies these policies internally. The key answer is to legalise the implementation of the annexation plan. This is why the first clause says that “the land of Israel is the historical homeland of the Jewish people” - the “land”, not the state.

It is also why the law devotes an entire clause to ensure that “the state views the development of Jewish settlement as a national value and will act to encourage and promote its establishment and consolidation."

Annexation plans are not a secret; they are the political programme of Israel’s right-wing settler parties

Israel aims to annex large parts of the occupied West Bank through settlement expansion, entrenching the system of colonisation and imposing facts on the ground that counter Palestinian historical ownership. Such efforts have increased with the support of the current US administration, which has fully embraced a government run by a right-wing settler elite.

Ayelet Shaked, minister of justice, was trying to advance a plan to formally incorporate into Israel Area C, the part of the West Bank (about 64 percent) that is under Israeli control, which would require extending citizenship to the Palestinians who live there. "We can definitely take in 100,000 Palestinian citizens," Shaked told the Atlantic magazine last year.

Annexation plans are not a secret; they are the political programme of Israel’s right-wing settler parties. Israel aims to pillage Area C through the nation-state law and other colonial policies, reckoning that the “world will get used to it”, as occurred with Jerusalem and the Golan Heights.

Area C makes up around 60 percent of the West Bank and is subject to ethnic cleansing, settlement expansion, house demolitions, uprooting of trees and confiscation of lands. These areas are rich with natural resources, agriculture, water and land that could be used for building and development. Without this area, there will be no Palestinian state.

The nation-state law is part of a US-Israeli plan to eliminate the Palestinian quest for statehood: no Jerusalem, no return, no sovereignty, no state.

At best, US-Israeli proposals suggest that Areas A and B in the West Bank, excluding Jerusalem, could be part of a confederation with Jordan, with the border under Jordanian security and Gaza under Egyptian security.

The ease with which the US puts forth such proposals, and Israel’s confidence in deliberating plans for its future security, is a consequence of the Arab world’s normalisation with Israel.

Prime Minister Benjamin Netanyahu’s annexation comments came on the eve of the recent election, as part of his attempt to win votes from Shaked’s party. He also referenced annexation plans in the April election. The fact that these comments came in an electoral context does not mean that they are less dangerous, or that Israel is bluffing.

Netanyahu spoke about annexing the Jordan Valley because without it, Israel would not be able to fully control the West Bank militarily. It is also an attempt to isolate it from Jordan.

The annexation plan aims to target Palestinian sovereignty and historical ownership of the land. In light of the US-sponsored “deal of the century” and in the context of ongoing Arab normalisation with Israel, this deals a severe blow to Palestinian statehood and international law.

The struggle against annexation should become a major entry point to fight the broader nation-state law for the Palestinian political, civil and diplomatic community, aided by international groups that support Palestinian rights. There must be serious efforts to pre-empt other legislation to steal this part of the Palestinian homeland.

The title “Area C” might seem distant and cold; it may not carry the weight of Jerusalem in our collective consciousness, but on the ground, Area C comprises Palestinian villages that are struggling for existence: Khan al-Ahmar, al-Walaja, Kufr Qaddum and the Jordan Valley. Let us prevent their own Nakba.

Nevine Abu Rahmon is a political activist and a former MK for the Tagammu party.