A fighter loyal to the GNA stands on a rooftop during clashes with Khalifa Haftar’s forces in Espiaa, Libya, on 29 April (AFP)

Turkish President Recep Tayyip Erdogan has framed his country's military deployment to Libya as a matter of survival, not only for Turkey’s strategic interests across the region but also for Libya’s Government of National Accord (GNA).

The head of Libya’s High Council of State, Khalid al-Mishri, told MEE that Turkey’s upcoming military support to the GNA would prevent General Khalifa Haftar’s forces from taking control of Tripoli. From high-level political figures to military commanders on the frontline, I found consensus during a recent visit to Tripoli that Turkey is the only country able to push back Haftar and contribute to rebuilding the Libyan state.

Turkey’s new military step in the context of the Libyan conflict provides strategic leverage for both sides and will ultimately bring new dimensions - as well as challenges - to Ankara’s regional strategy.

On 27 November, Turkey and Libya signed two separate memorandums of understanding on military cooperation and the maritime boundaries of countries in the eastern Mediterranean region, aiming to achieve their mutual strategic objectives.

In the short term, the GNA aims to push back Haftar’s forces in Tripoli; in the medium term, the Libyans seek to consolidate their partnership with Turkey to find a real solution to contain Haftar and bring Ankara into the Libyan picture as an external balance.

Turkey, meanwhile, aims to secure its paper-based gains from the memorandums of understanding and consolidate its foreign policy strategy in the context of the Mediterranean geopolitical competition. But its new Libya deployment is about much more than that.

Firstly, Turkey’s strategy in Libya is a response to its growing geopolitical isolation in the region, in light of the intensification of its military involvement in the Syrian civil war, its deteriorating relations with the Saudi-led bloc, and the recent Greek-Israeli-Cypriot pipeline deal, which angered Ankara. The strategic rupture in US-Turkey relations over Syria and the Mediterranean maritime dispute have also increased Turkey’s geopolitical anxieties.

Secondly, since its military intervention in Syria, Turkey has been positioning itself as one of the regional actors able to contain a Saudi-led coalition. By restructuring the offensive military capacity of Turkey’s armed forces, Ankara can display its deterrence capabilities and strategic decisiveness. Libya is another textbook example of how Turkey seeks to operationalise its strategy of military activism.

Establishing a regional counterbalance is another driving factor behind Turkey’s strategy in Libya. Turkey is seeking to establish a new political alliance in the North Africa region against the anti-Turkish power bloc. Tunisia, Algeria and Niger could be partners in this counterbalancing front, helping to deliver Turkey’s interests in the region.

The probability of Libya’s conflict spilling over into neighbouring countries is also a key driver for Turkey. As such, Erdogan’s recent surprise visit to Tunisia was not only a step towards establishing a new alliance, but also an attempt to give Turkey some room to manoeuvre militarily in Libya.

In addition, Turkey’s military mission in Libya gives Ankara more leverage with Western countries. While states such as the US, France and Italy have held inconsistent attitudes towards the Libyan crisis, Ankara gains moral and political superiority by taking responsibility to protect Libya’s internationally recognised government.

More importantly, Turkey’s strategic interests in the eastern Mediterranean heavily hinge on the survival of the GNA. The Turkey-Russia strategic rapprochement is another controversial feature of Turkey’s Libya pivot; while they have strategic divergences over Syria, Erdogan and Russian President Vladimir Putin are both playing a role that could shape Libya’s political future - particularly in the absence of other Western countries.

At the same time, Turkey’s military action in Libya brings challenges. For starters, Ankara will have to deal with the weaknesses of the armed forces under the control of the GNA. A military commander recently told MEE in Tripoli that Turkey should seriously take into consideration restructuring the security sector, in order to be successful in the operational theatre.

Libya’s security sector and conflict landscape are completely different than Syria, and while the GNA has absolute control over its militias, this may not be enough to push back Haftar militarily. 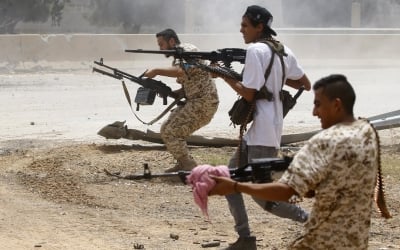 Turkey’s main strategic priority in the context of its military deployment is to protect the memorandums of understanding signed with the GNA. Expectations on the Libyan side are even higher: that Turkey’s involvement will bring an absolute victory against Haftar, allowing GNA forces to liberate strategic places.

But the question of Turkey’s actual military role remains unclear. Turkey’s defence minister says it will be advisory in nature, but this would not provide an absolute victory against Haftar. Ankara should consider broadening the scope of its operation to also play an offensive military role in Libya.

Yet, the looming military escalation between the Turkey-GNA axis and the Saudi-UAE-Egypt-Haftar axis could deepen the Libyan conflict, ultimately bringing costs for Turkey. As such, following its military deployment, Ankara will likely choose to play a constructive role to support the political process.