Mobashra Tazamal
With subtle - and not so subtle - words and phrases, Trump advisors and gadflies are paving the way for full blown hatred directed at Muslims 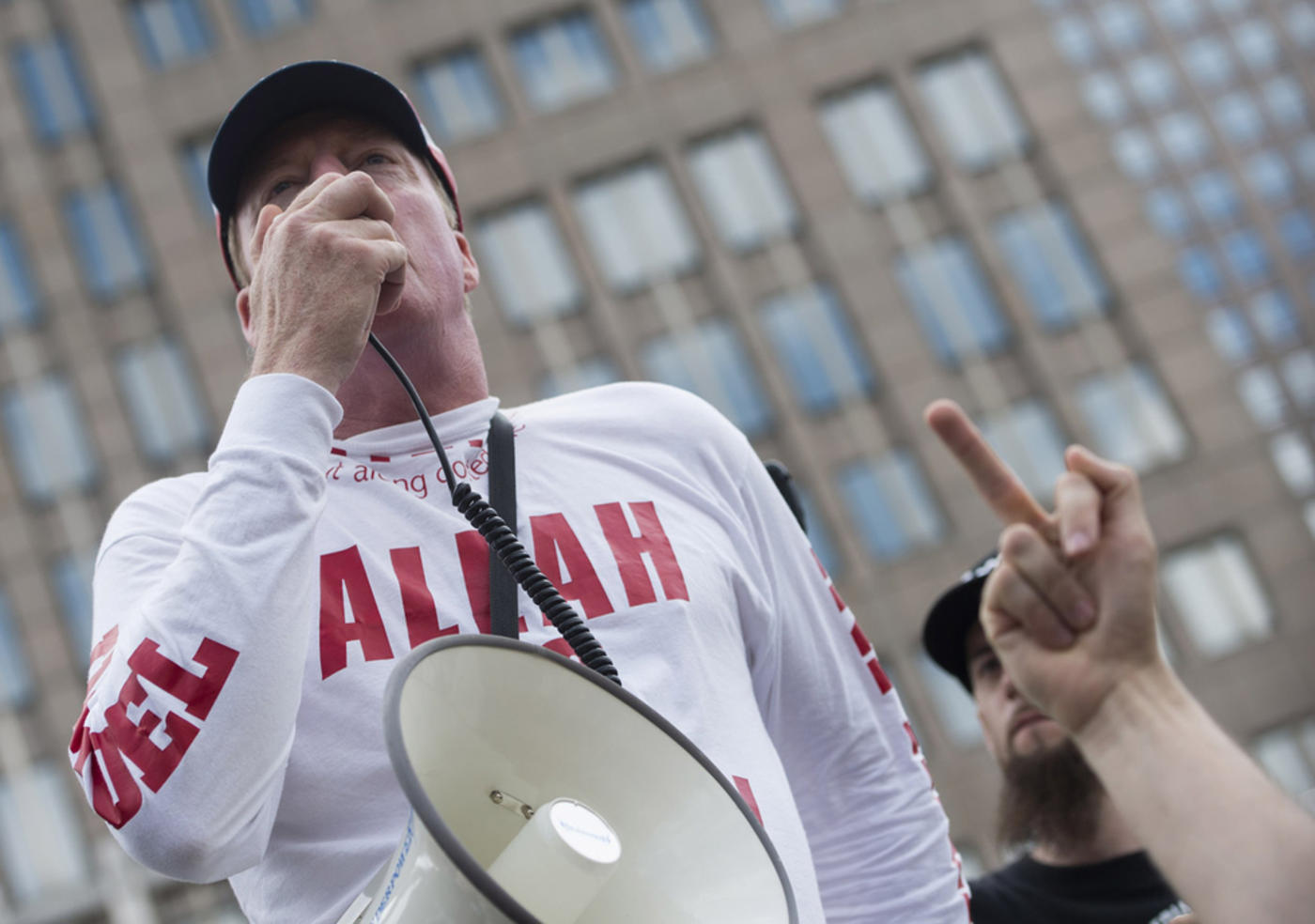 It’s been 13 days since the inauguration of Donald J Trump as the 45th President of the United States of America. Thirteen days of tweets, inflammatory and divisive rhetoric, and of executive orders.

The Trump administration has mainstreamed the far-right Islamophobia movement

Last Friday, just as the work day concluded, the White House announced an executive order halting all Muslim immigration from seven Muslim-majority countries, the execution of a campaign promise that had been met with roaring applause.

Then this Wednesday, Reuters reported that the US government’s deeply problematic “Countering Violent Extremism” programme will be revamped and renamed “Countering Islamic Extremism”. The rebranding will also remove white supremacism from the programme.

In addition to these developments, there are rumbles about a potential forthcoming executive order seeking to designate the Muslim Brotherhood a terrorist organisation.

In Congress, Senator Ted Cruz has already introduced a bill which seeks to accomplish the same goal, and expands its reach to any individuals or organisations that the state deems to be associated with the group.

READ MORE: The far-right may be rising, but don't give up hope. So is popular resistance

Mass rallies against the Muslim ban have erupted across the country, and uncertainty and fear plague the Muslim American community as the overt targeting of Muslims is mainstreamed.

This demonisation of Muslims and Islam did not materialise overnight: the foundations date back centuries. Orientalists in Europe and the US utilised negative stereotypes and descriptions of Muslims to facilitate the colonisation of Muslim lands. The current personification of Muslims as violent, irrational, and antithetical to the “West” is found in orientalist works of study and popularised by Samuel Huntington’s Clash of Civilizations.

Huntington was an advisor to George W Bush and his presence was evident in the administration's rhetoric. The Bush and Obama years focused on discerning between the peaceful majority of Muslims and those who followed a “perverted” version of Islam. This false identification still maintained Islam - albeit in a variant from the mainstream - as the root cause and the explanation for violent behaviour.

By utilising Arabic words such as sharia, jihad, allahu-akbar and even Islam, the Gaffneys, Gellers and Spencers of the world seek to instill fear while presenting themselves as credible experts

But this framework ignored the very real social, political and economic factors that have created the instability we are witnessing in many parts of the Middle East.

The demonisation of Muslims intensified after 9/11 as fear gripped the American population. An audience lay awaiting and a network of self-proclaimed “experts” and “researchers” pounced at the chance to profit from hate. This interconnected circle of bloggers identified the roots of American rage and built a discourse around it.

And that was a discourse that was easy to construct and popularise as anti-Muslim sentiment continued to grow in the country. As of March 2015, over half of Americans (55 percent) have an “unfavourable” opinion of Islam. Further, Islamophobic sentiments are more common among those Americans who are Republican and white - Donald Trump’s demographic. Data supports this apparent overlap: in the early stages of the presidential campaign in late 2015, 43 percent of Republicans who expressed very unfavourable views of Muslims also preferred Trump for president.

The Trump administration has mainstreamed the far-right Islamophobia movement. A network of glorified bloggers and citizen experts, who have amassed hundreds of thousands of dollars, successfully tapped into a segment of the American population. By declaring Islam, the religion of 1.6 billion people, to be a political ideology, the movement seeks to incite violence and push for discriminatory policies against Muslims.

A recurring name in this circle is Frank Gaffney, the founder of the Center for Security Policy. Gaffney is a known conspiracy theorist hell-bent on proving that the Muslim Brotherhood has infiltrated the US government. He believes all Muslims to be potential extremists, proclaiming that they are all just waiting for the right time to become violent: he’s termed this “stealth jihad”.

Just as German Jewish writer Victor Klemperer wrote about Nazism in 1946, the network of anti-Muslim individuals and organisations uses “single words, idioms, and sentence structures” in repetitive manners to the point where these are internalised. These single words also happen to be in another language. By utilising Arabic words such as sharia, jihad, allahu-akbar and even Islam, the Gaffneys, Gellers, and Spencers of the world seek to instill fear while presenting themselves as credible experts.

The success in part lies in this network’s colonisation of these words and phrases by defining them and then re-imposing them on Muslims. Phrases and descriptions such as “Islamist terrorists”, “radical jihadis,” and “Salafi-Jihadis,” are a strange amalgamation of two languages lacking coherent definitions, but serving a simple purpose- to dehumanise Muslims.

Robert Spencer, founder of Jihad Watch, colonises the entire faith by defining what he considers “Islam” to be as exemplified by Osama Bin Laden. By contrast, all “peaceful” Muslims are either ignorant of their faith or faking their “moderate stances”.

READ MORE: Steven Bannon's plan to bring down US democracy has started. Be very afraid

These individuals seek to sow suspicion and generate deep paranoia. They are feelings that find fertile ground among those subjected to a failing education system and unprecedented shrinking of the middle-class incomes, and prepare foot soldiers for Trump’s campaign against Muslims.

The far-right and ultra-nationalist Breitbart furnishes a platform for these individuals to join forces. It publishes anti-Muslim, anti-Semitic, anti-black, and anti-LGBTQI articles while promoting an “unregulated” environment where comments often involve race-baiting and inciting violence. Just as Nazi propaganda maintained its simplicity, Breitbart is not concerned with accuracy or facts but provides “malcontent”, appealing to the emotions of the “silenced majority”.

Trump is the face of this radicalisation of the GOP, but it is his chief strategist Bannon, who is defining this era of authoritarianism. Bannon is believed to have been one of the architects of the executive order targeting Muslim refugees and immigrants. He cites Nazi propagandist Leni Riefenstahl as a model, and maintains that “Islam is not a religion of peace” but "a religion of submission".

It hasn’t even been two weeks since Trump took office and already this administration is ruling by decree, instituting travel bans, criminalising free speech, targeting civil society, and attacking free press. Populism has given rise to an authoritarian White House.

What's next? We can expect a war-mongering administration with a desire to drop bombs on Iran (to the rejoicing of weapons companies), the continued targeting, dehumanising, and othering of Muslims, coupled with a deep and all-encompassing surveillance of the community.

We will most likely see some sort of Muslim registry system, deportations and arrests. The administration and its media wing will slander any and all who dare criticise it. We will witness a clampdown on free speech, free assembly, and free association, as dissenting civil society will be met with state hostility.

Far-right nationalism has found a friend in Donald Trump and, with Bannon and company at the controls, the administration will continue to lock and load the guns of white supremacy.

- Mobashra Tazamal  is a human rights activist, researcher on Islamophobia, and has an MA from SOAS, University of London. Islamophobia
'I feel scared for my kids': Islamophobia in New York 'worse than after 9/11'