Why the BDS movement can no longer be ignored

Shir Hever
Following the international condemnation of this summer’s war on Gaza, the boycott, divestment and sanctions movement has grown in strength – so much so that Israel can no longer pretend that it does not exist 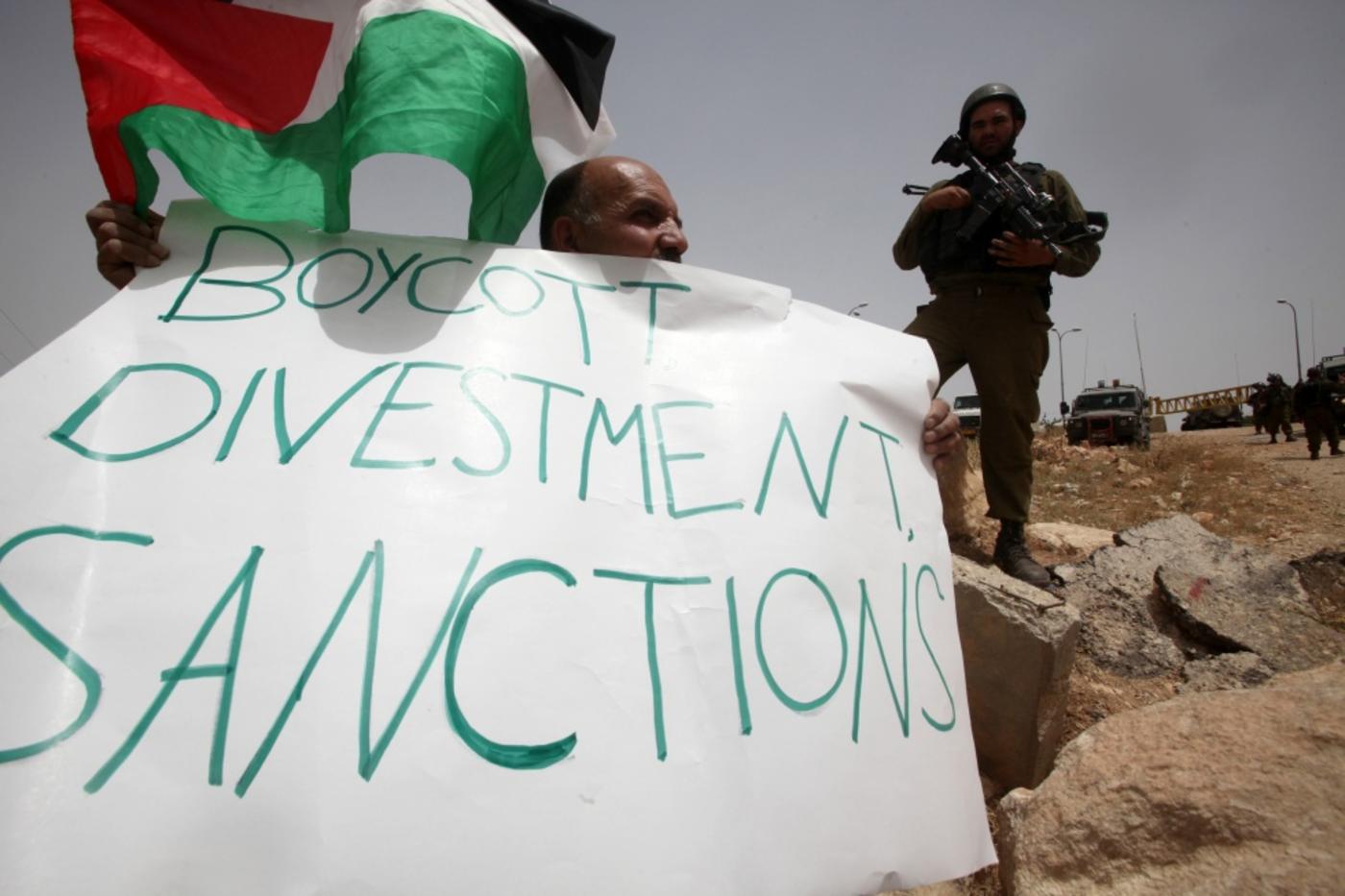 Palestinians, living under Israeli occupation and repression for decades, have explored various ways to fight for their freedom. These forms of struggle included the use of arms, but the cases in which Palestinians were able to stand up to the Israeli war machine are rare. In 2005, a protest movement focusing on individual and collective rights, based on international solidarity, emerged in the form of BDS: Boycott, Divestment and Sanctions. The movement called for the boycott of Israeli goods in order to pressurise the Israeli government into recognising Palestinian individual and collective rights, and to implement international law.

The movement grew rapidly, and was endorsed by labour unions, churches, political parties, student unions and more. The military might of the Israeli army is of no use against a global movement whose main weapon is information, and the awareness of the BDS movement, and its economic consequences of Israel’s policies, has spread in Israel in recent years.

The BDS movement was dismissed in its first years as insignificant. Rightwing Israelis quickly framed it as an antisemitic movement, as if the state of Israel is the embodiment of all Jews and only of Jews, and pressure against Israeli policies is an affront to Jewish people. This argument rings hollow in light of the many Jewish organisations around the world that support the BDS movement and by the fact that the organisation is a peaceful one, which calls for the implementation of international law.

Israeli exporting companies usually refuse to comment on BDS. In a prime time news story on BDS from January 2014, a lawyer whose firm counsels Israeli companies on BDS was interviewed, and emphasised that his clients wish to remain anonymous. Companies that choose to deny that BDS was affecting them are taking the losses and shielding the Israeli public from knowing the truth. The companies could argue that they do not represent the Israeli government and oppose Israeli policies, and ask to be excluded from the boycotts. So far, not a single company has done so. The companies are worried that such a position would raise the ire of the Israeli public and the Israeli government against them. They prefer to keep silent, and hope that the movement will just dissipate, or that the Israeli government will somehow intimidate the activists.

The Israeli economy depends heavily on its exports, which are targeted mainly at Europe and the US markets. The Israeli Manufacturer’s Association is not blind to the fact that aggressive Israeli policies boost the BDS movement, as people around the world are enraged by Israeli attacks, and look for ways in which they can participate in the protest.

Ironically, no organisation advances BDS more strongly than the Israeli government itself, which is aware that its policies are isolating Israel in the world, but nevertheless repeatedly attacked the Gaza Strip five times (including two large-scale ground invasions); tightened the siege on the Gaza Strip; invaded cities in the West Bank; attacked the ships on the freedom flotilla in international waters; and expanded the illegal colonies in the West Bank. Each of these actions serve to boost the BDS cause.

A group of 80 of Israel’s largest capital owners met in 2011 to discuss the economic implications of the Israeli government actions in the occupied territory. They concluded that if the peace process will not be resumed, Israel will become ostracised and boycotted like South Africa under apartheid. Yet these people, rich as they may be, were not able to sway the positions of the Israeli government. Some of them chose to accept the losses, others chose to move their business outside of Israel, but the majority simply did nothing and hoped that the storm will pass.

All this has changed with the recent attack on Gaza in July-August. The attack brought to light the most violent and nationalistic aspects of Israeli society. Israelis who did not toe the line were called traitors, threatened or lost their jobs. In this environment one could hardly expect company managers to try to rein in the onslaught, but it was exactly at that time that BDS became more significant than ever.

All three major Israeli economic newspapers: TheMarker, Globes and Calkalist have published extensive reports on BDS in light of the war. As activists in Oakland, California managed to block an Israeli cargo ship from docking in August, the story was covered extensively in Israel. Idan Ofer is the largest shareholder in the Zim company that owns the ship, and was the very same businessman who assembled the meeting of Israeli capital owners in 2011. His worry about the growth of BDS turned out to be prophetic.

Of possibly greater impact is the decision of the European Union to ban the import of poultry and egg products from the illegal Israeli colonies. The EU has demanded proper labelling of products from the colonies for years, but the Israeli government allows companies to deceive customers about the source of the products, while compensating colonists who are forced to pay higher customs upon exporting their goods to Europe. Now the EU claims that they cannot recognise the authority of the health inspections in colonies, and therefore has moved from a demand for labelling to a ban on products from the colonies. The EU argues that the veterinary supervision in the colonies is not recognised, and therefore the products cannot be considered to be conforming with European health standards. Israeli farmers warned that this move, which is expected to extend to the dairy, fish and wine sectors, would be devastating for Israeli exports.

-Shir Hever is a graduate student at the Free University of Berlin, and an economist with the Alternative Information Centre.

Photo: A Palestinian holds a placard as part of a protest during which they try to set up a tent on 8 June, 2013 near the Jewish settlement of Bat Ayin and the West Bank village of Surif, west of Hebron (AFP).